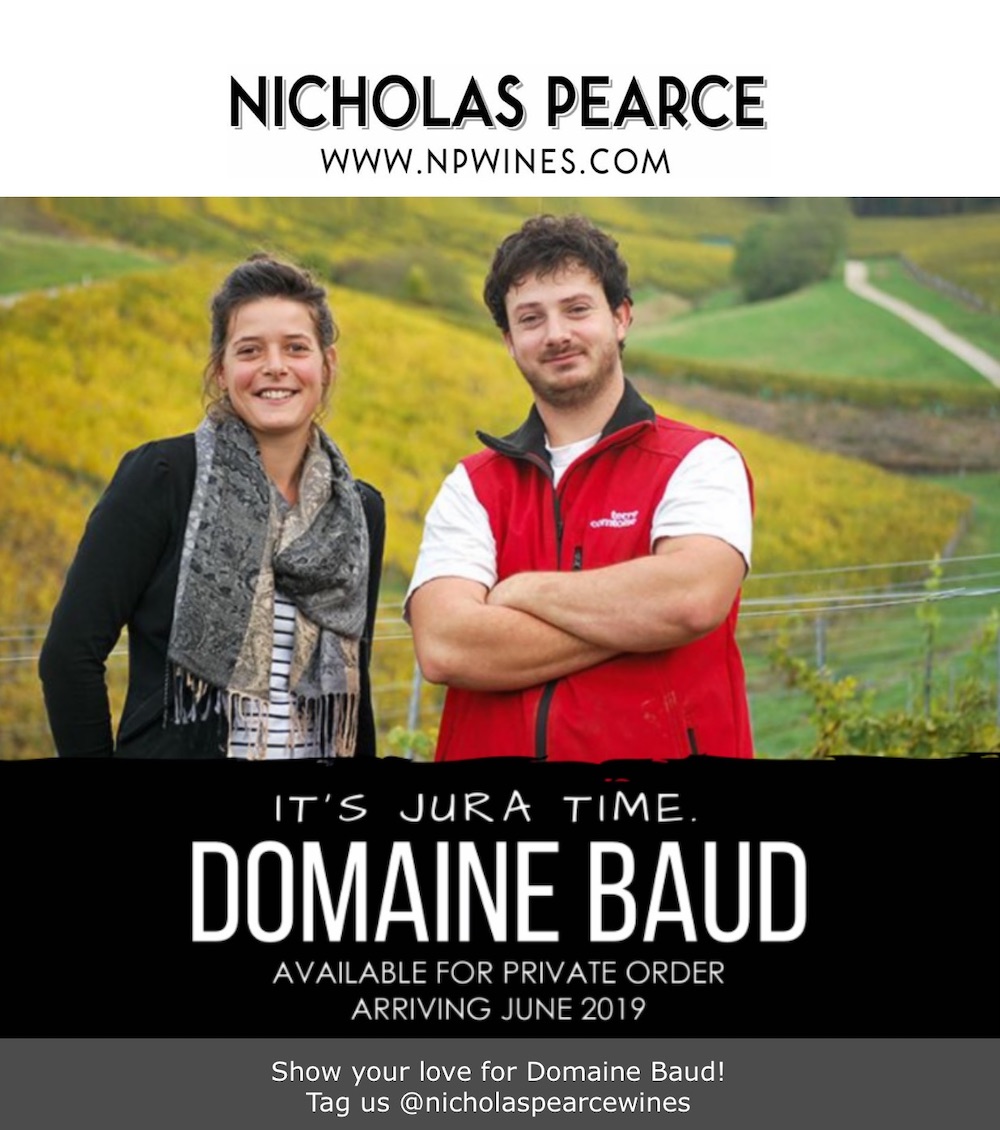 Clémentine and Bastien Baud are the 9th generation to run the family estate of Domaine Baud. Bastien is in charge of the vineyards and winemaking while Clémentine manages the winery and trade. The estate, located in the heart of Château-Chalon AOC in Jura, dates back to 1742. Initially practicing mixed farming, it wasn’t until 1950 when René Baud rebuilt the phylloxera and war ravaged vineyards that the winemaking really took off. At that time, only 4 hectares of vines were cultivated. Over the generations, the vineyards have grown to approximately 24 hectares across 3 AOCs. The winery has been certified ‘Terra Vitis’ since 2014, signifying their commitment to sustainable winemaking.

‘Jura. This is the region of lush farmland to which we owe the word Jurassic, Comté cheese and, until the late 19th century, vast quantities of wine, as much as was produced in Burgundy.’

‘Jura’s wines are some of France’s most distinctive, however. Chardonnay may be the region’s most planted grape variety and a certain amount of light Pinot Noir is made, both of them contributing to some great-value fizz, but Jura can boast its own highly individual grape varieties. Poulsard makes vivacious, rose-scented reds. Trousseau’s rather deeper reds intriguingly combine pepper and violet scents. But most exciting of all is Trousseau’s progeny Savagnin Blanc, which is identical to the heady Traminer but in Jura is capable of making extremely tense, long-lived, full-bodied dry whites as well as versions that are deliberately oxidised, more or less, to make ‘yellow wines’. The most extreme versions that qualify as vin jaune are aged for six years or more under a thin layer of surface yeasts in only partly filled casks to produce wines vaguely reminiscent of old fino sherry, but with a distinctly Jura/Savagnin orchard-like accent.’ – Jancis Robinson, June 2015 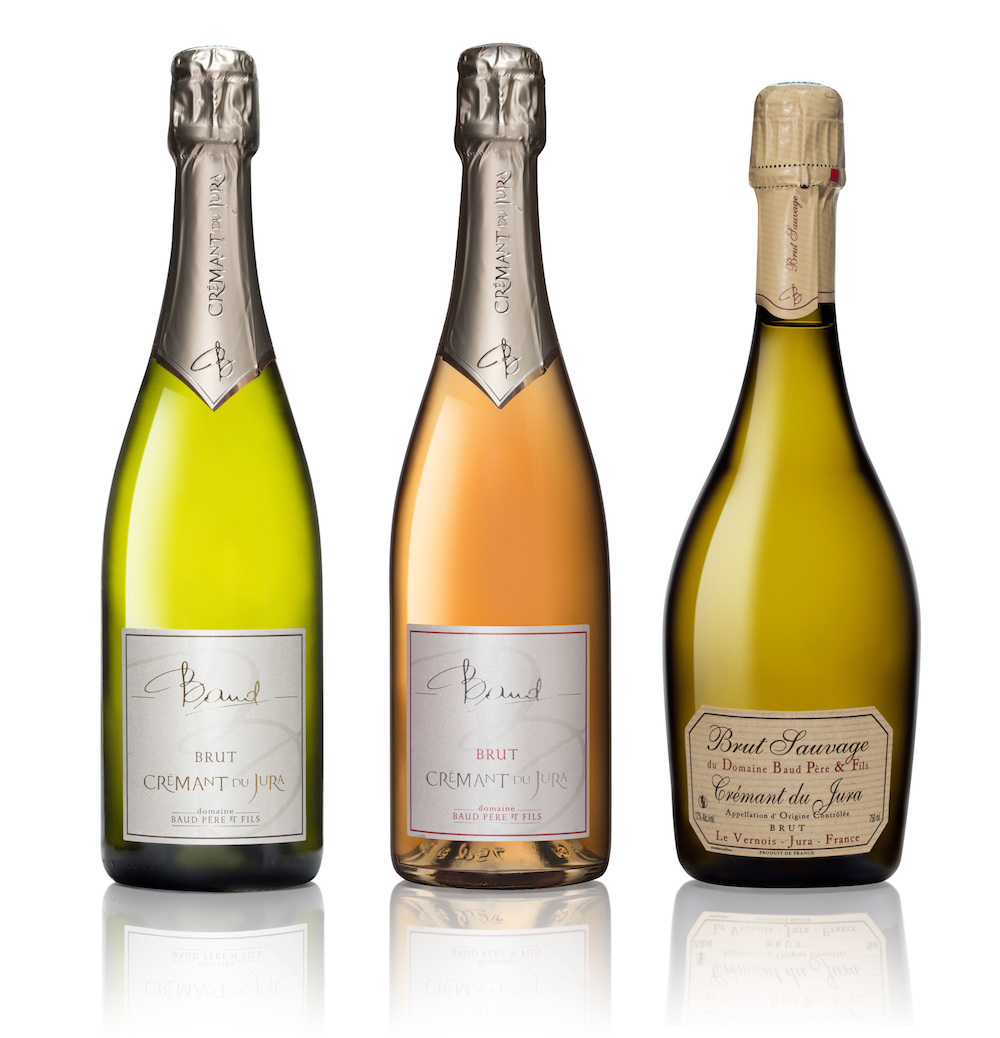 NV ‘Brut Sauvage’ Cremant de Jura (Pinot Noir/Chardonnay) $32.95 12x750mL
Composed of Chardonnay (70%) and Pinot Noir and dosed at barely 3.5 grams per liter. The creaminess and fatness of this wine is rather attributable to a long aging on latte (24 months). A full-bodied wine, with flavours of bliss apple, marzipan and roasted hazelnut.

2015 Chardonnay ‘Les Prémices’ AOC Côtes de Jura Blanc $27.95 12x750mL
Silky and full bodied, this oak-aged Chardonnay exhibits classics notes of apples, white flowers and citrus. Grown on marl-limestone soils from the Triassic period. On the palate, this is a balanced and complex wine that ends on a tangy note.

2015 Cuvée Tradition ‘Deux Grains de Paradis’ AOC Côtes de Jura Blanc $29.95 12x750mL
This is a blend of Savagnin and Chardonnay aged in barrel for 3 years. The Savagnin is traditionally left to oxidize where the chardonnay is topped up and kept fresh. Roasted apples, baked nuts, candied lemons with a sherry like nose but full and fresh Chardonnay/Savagnin palate. Long, beautiful and delicious.

2018 Poulsard AOC Côtes de Jura Rouge $23.95 12x750mL – BOTTLING END OF MARCH
This wine has to be served at a temperature of 11 to 14°C. On the nose, the wine releases powerful aromas of fruits, namely blackcurrant and strawberry and also oaky aromas, mushrooms and straw.

2016 Trousseau AOC Côtes de Jura Rouge $28.95 12x750mL
Typical grape variety from this region, the Trousseau grows on the red marl and rich gravel soils. Demanding, by virtue of its nature, the trousseau is the rarest grape variety of the Jura region. The nose is characterized by red fruits, humus, mushrooms and leather. The bouquet is franc without being aggressive and the tannins are discreet. It has flavours of Morello cherry and blackberry. It is well-balanced and harmonious.

2017 Rosé d’Été L’Insoumise $23.95 12x750mL
This direct press rosé is made from Poulsard and Pinot Noir. Very aromatic and fresh, this is meant for summer nights.

NV Frais Nesie Sparkling $28.95 12x750mL
Vinified in the traditional Champenoise method, this wine has an addition of Vedrenne Elderberry syrup. Something fun and unique to enjoy!

NV Macvin du Jura AOC Côtes de Jura $43.95 6x750mL
This old traditional product has been known since the XIVth century. Its AOC Macvin du Jura was created in 1991. This is a liquor wine which is made of grape must blended with Vieux Marc of Jura. Thanks to its smoothness on the palate, this wine was nicknamed « le galant » (the gallant) by the Duke Philip the Bold’s wife, Marguerite de Flandres.

2010 Vin Jaune AOC Côtes de Jura $66.95 6x750mL
This is a powerful wine developing flavours such as green nuts, hazelnuts, almond, truffle and even curry. The main particularity comes from its blue marly soils which provide delicacy and mineral elegance. 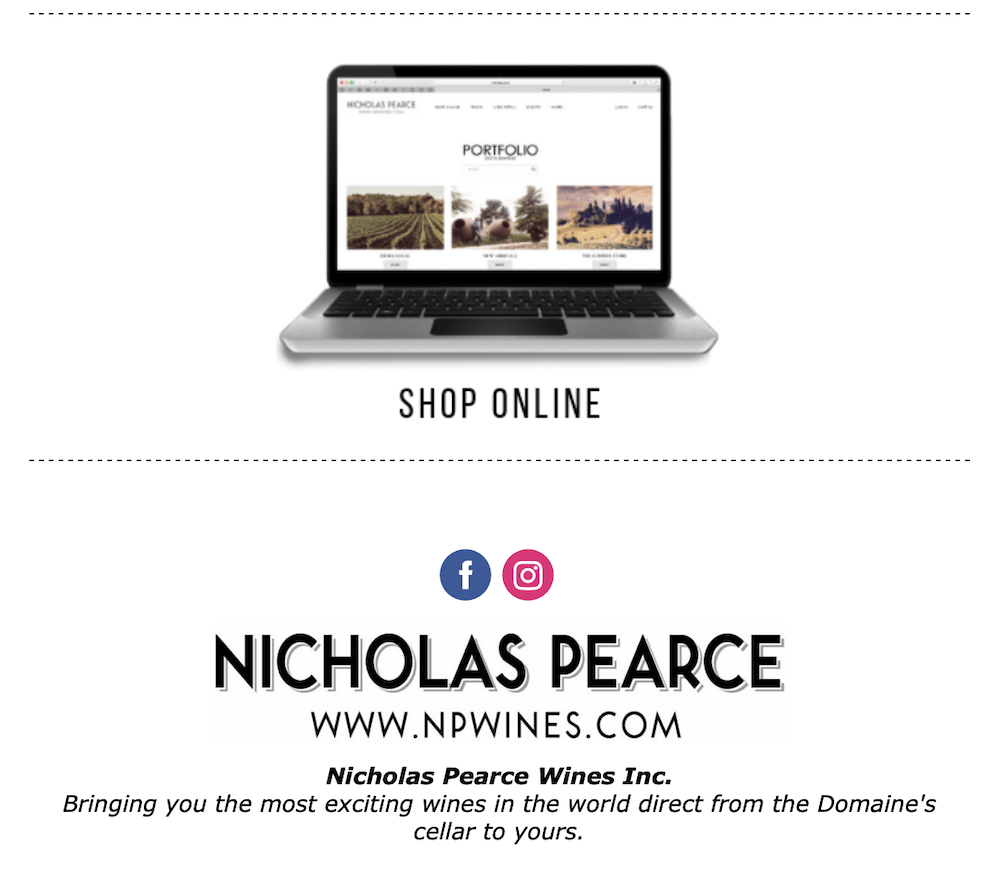