At The Brit Drinks Show 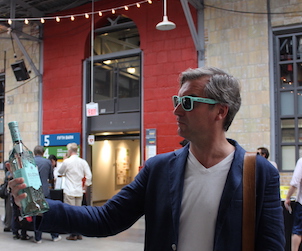 Malcolm Jolley does a shot of toffey vodka and swills gin at the Wychwood Barns. 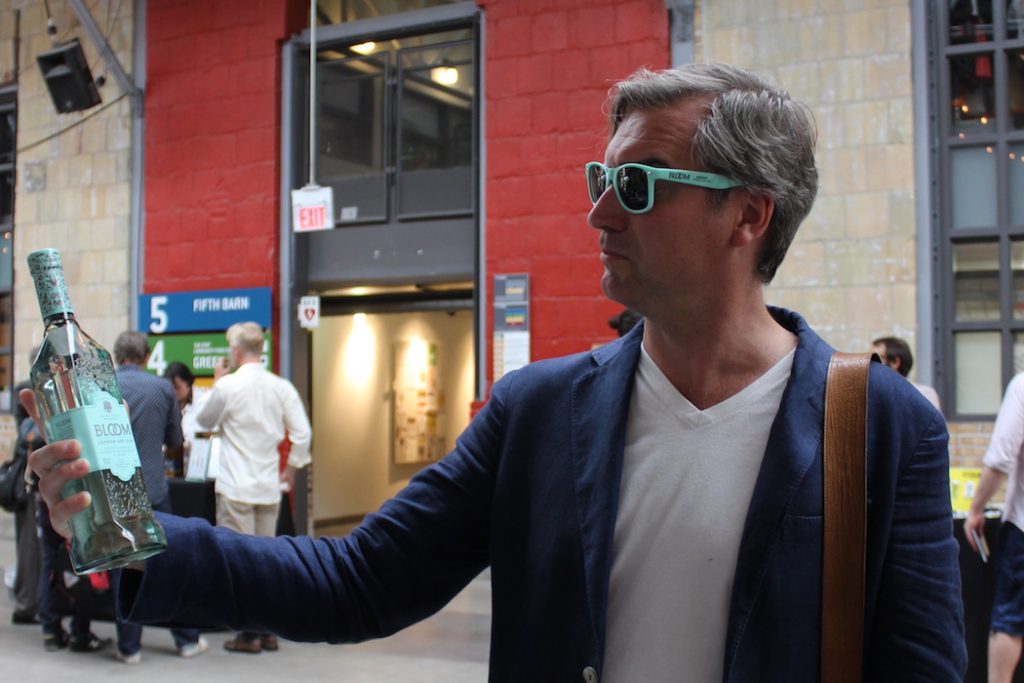 The British are coming! Or at least their drinks, which was the theme of the British Beverage Showcase, held last week at the Wychwood Barns. It seems the British government’s mind has been focused by recent and pending developments in their trade policy, and are taking a keener interest in selling things to their former colonials. I don’t recall being invited, much less attending a food or drinks event featuring things from Her Majesty’s Sceptred Isle. How could I refuse the chance to taste the exotic flavours of the home of my ancestors? Here’s who and what I found there. 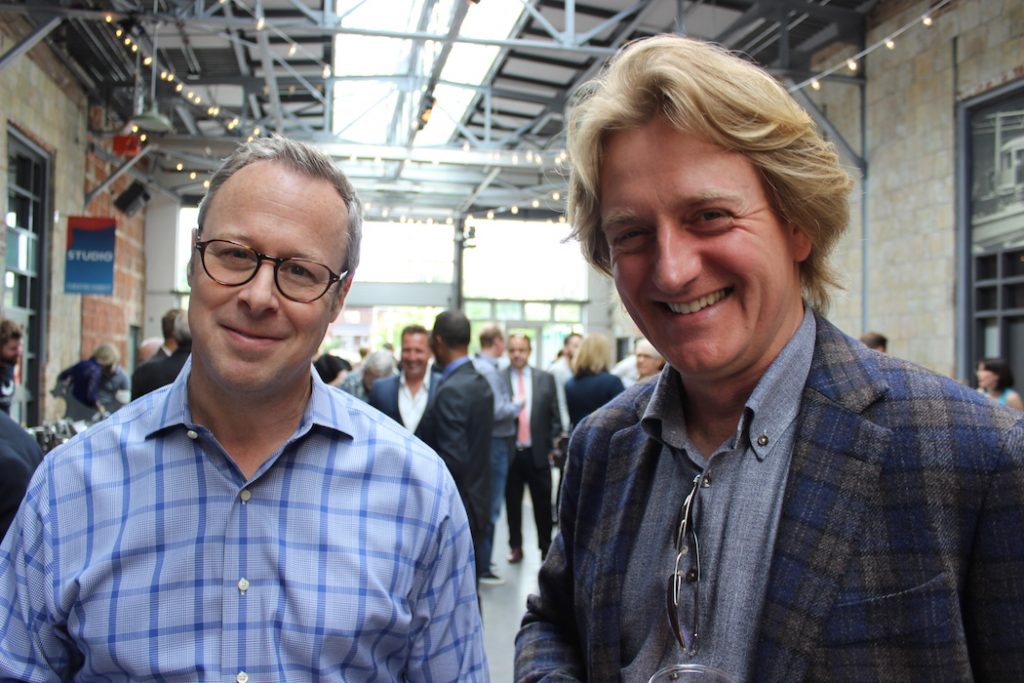 It’s a good sign if members of the local ethnic community native to the host country show-up, as Jameson Kerr and Chef Andrew Carter of Broadcloth Hospitality did. The pair have done well at The Queen and Beaver, The Oxley and The Wickson Social by attracting ex-pats and anglophiles alike with their version of Canadian Brit cool and they were on the hunt for interesting products and old favourites. 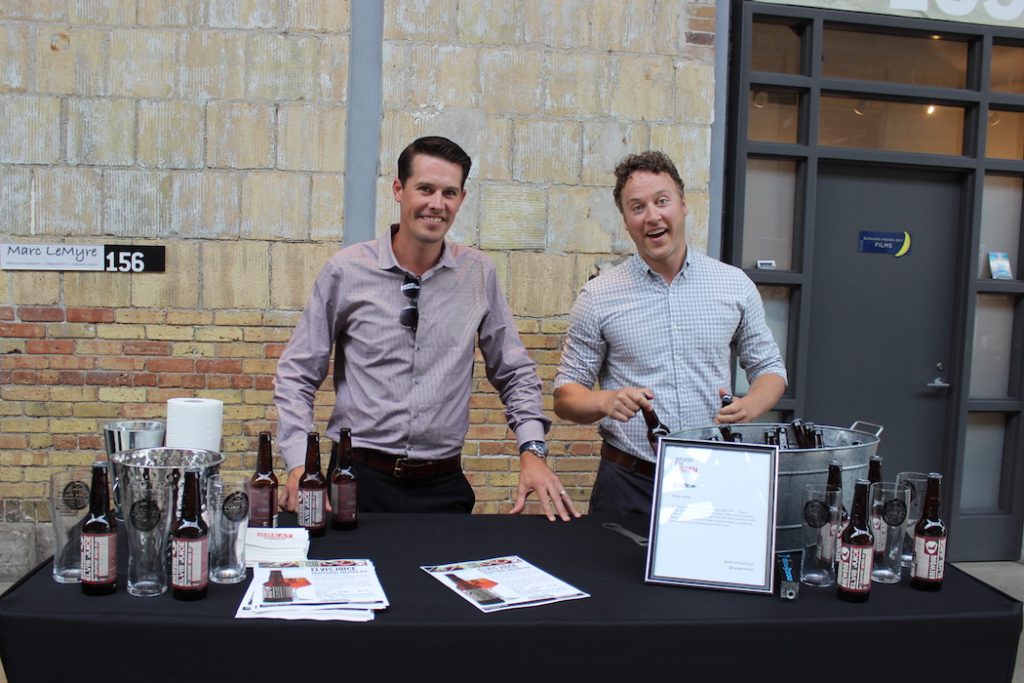 Jared Wells of Premier Brands, pictured here with a colleague, specializes in imported beers and ciders, including products from Scottish punk brewers Brewdog. Wells was pouring the Brewdog Elvis Juice, currently available at the LCBO (click here). This is a delicious IPA that’s “grapefruit infused”: grapefruit hunks are actually added to the mash before and during fermentation. It’s remarkably light and crisp, and certainly in no shortage of grapefruit flavour. Confounding expectations, it is not nearly as crazily bitter as some modern IPA’s can be, and I bet a crowd pleaser. Perfect for a hot summer’s afternoon. 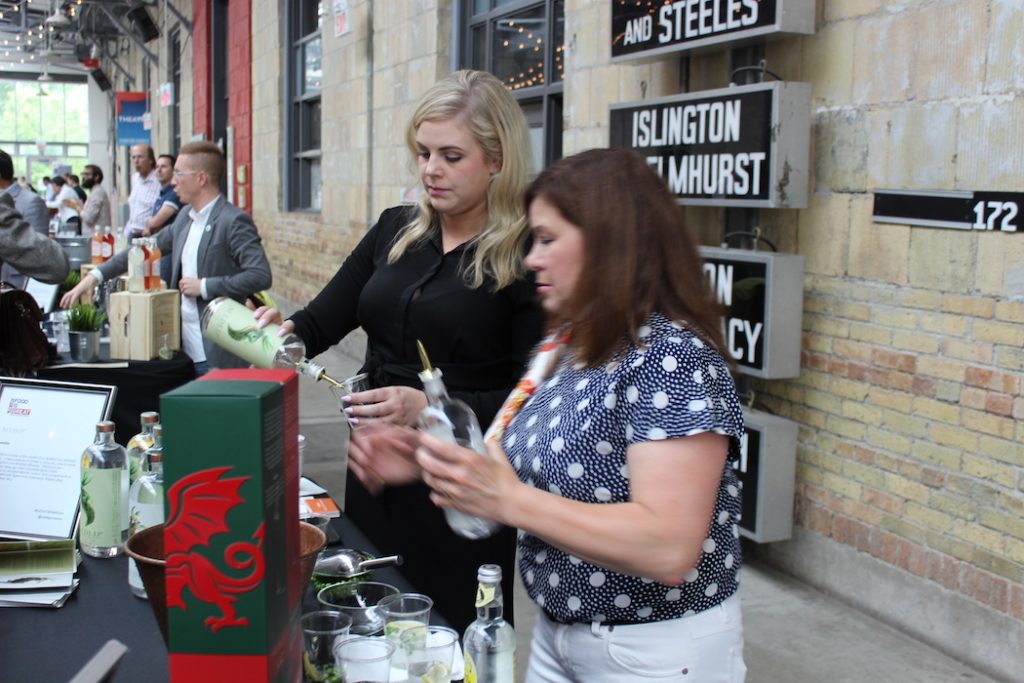 As I am enamoured by all things Welsh, I headed over to the Penderyn whisky stall, and had a lovely taste of their ‘Legend’ single malt, that’s aged in Madeira barrels. It has a lovely fruity note, and I think, ought to be in any collector’s library. Also poured at this stall, by agent Emma Herily of Bold Works, were two non-alcoholic “distillates” made by Seedlip. I tried one made with peas and other garden greens that was refreshingly cool. Finally a craft soft drink without sugar. Great idea. 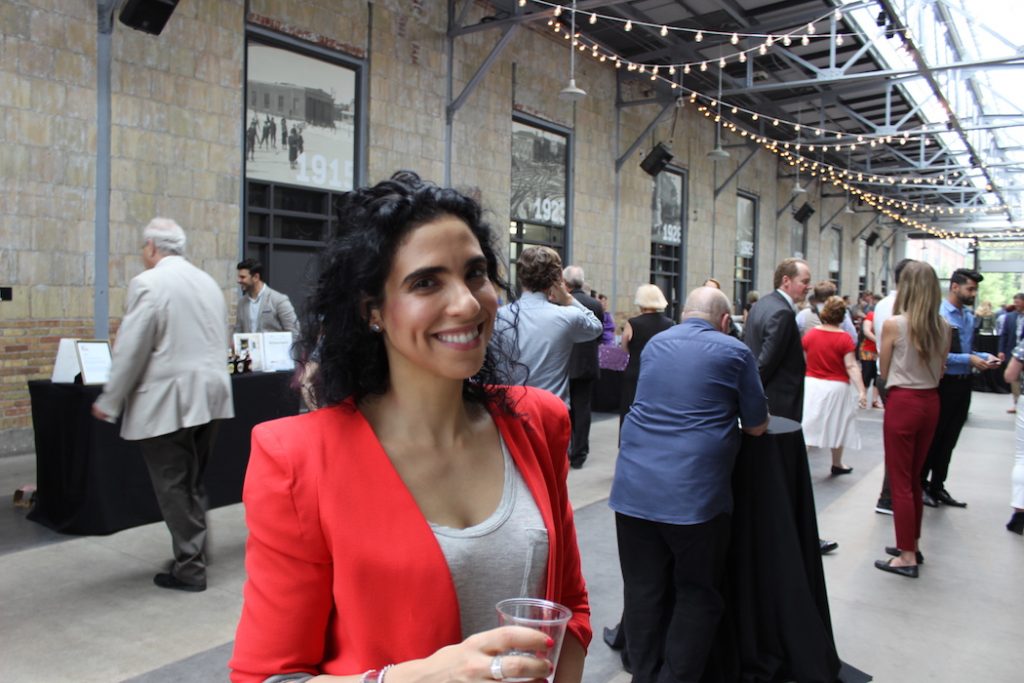 Aha: if spirits PR maven Lauren Wolff is around, then there will be a bottle or two of craft liquor not far away…

Sure enough, Wolff was at the barns to help support her client Greenall’s London Dry Gin, which is actually made in, or around, Manchester, and has as classic an English gin profile as you can imagine. What really caught my eye and palate at their table though (and not just because the nice young gentlemen above gave me a free pair of sunglasses) was the boutique project by their distiller Joanne Moore: Bloom London Dry Gin. Bloom, like it’s name suggests, has a particularly floral bouquet and citrussy palate. It’s a lovely sipper all on its own.

One of the big stars of the show was the Black Cow Vodka from Dorset. It was appropriately paired with the cheese that’s made at the same dairy. It’s celebrity endorsed (see this Globe and Mail review by Beppi Crosariol) and is supposed to have a creamy finish, which was lost on me (maybe I had had too much whisky and gin). It did strike me a perfectly smooth premium vodka with a hint of sweetness on the finish, as is often the case. 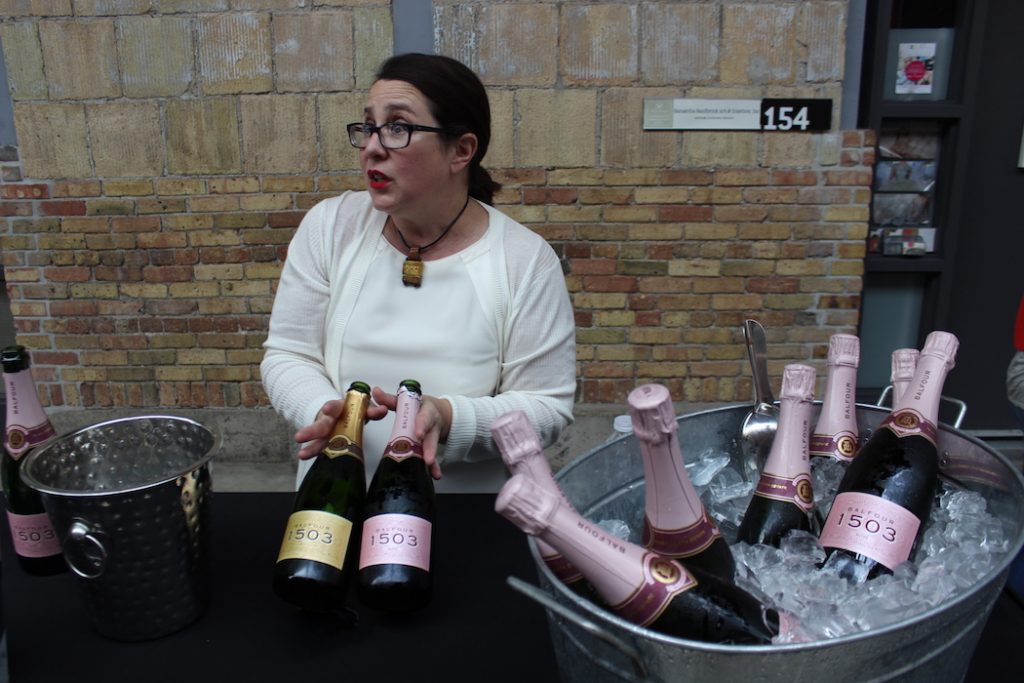 Finally, some wine! The English wine industry is maturing quickly and achieving all sorts of new benchmarks, but as Toronto drinks most of Niagara and Vancouver most of the Okanagan, London and it’s dynamic restaurant scene drinks most of what comes from the vineyards of Southern England. The 1503 Balfour Brut and Rosé sparklers from Kentish winery Hush Heath are a welcome exception to this rule. The Rosé is due to make it to the LCBO in the next few months. 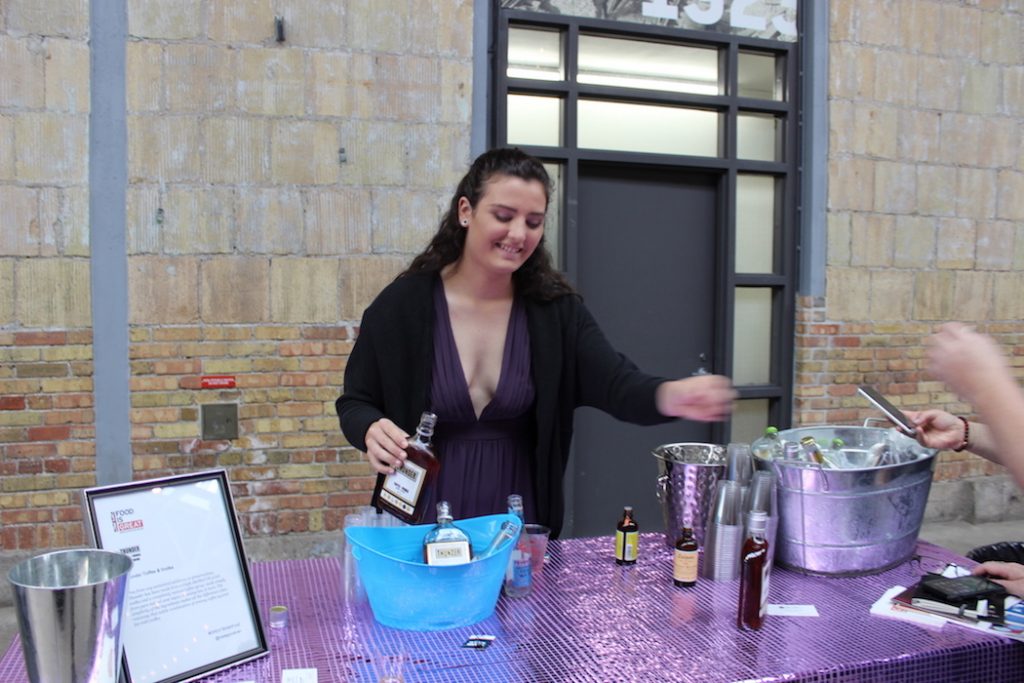 It would be easy, way too easy, to deride what the LCBO website calls Thunder English Toffee & Vodka Spirit Drink. So, I am going to praise it and say that this drink is not just a perfect way to simultaneously increase alcoholism and type II diabetes among the youth of the Anglosphere, but it’s also pretty much exactly like drinking a toffee – no small feat, were one to desire the experience. The poor young lady who was serving it, and received more than a few snickers from jaded food and wine journalists (or at least one), told me that it was made with 100% British butter. So there’s that, too. 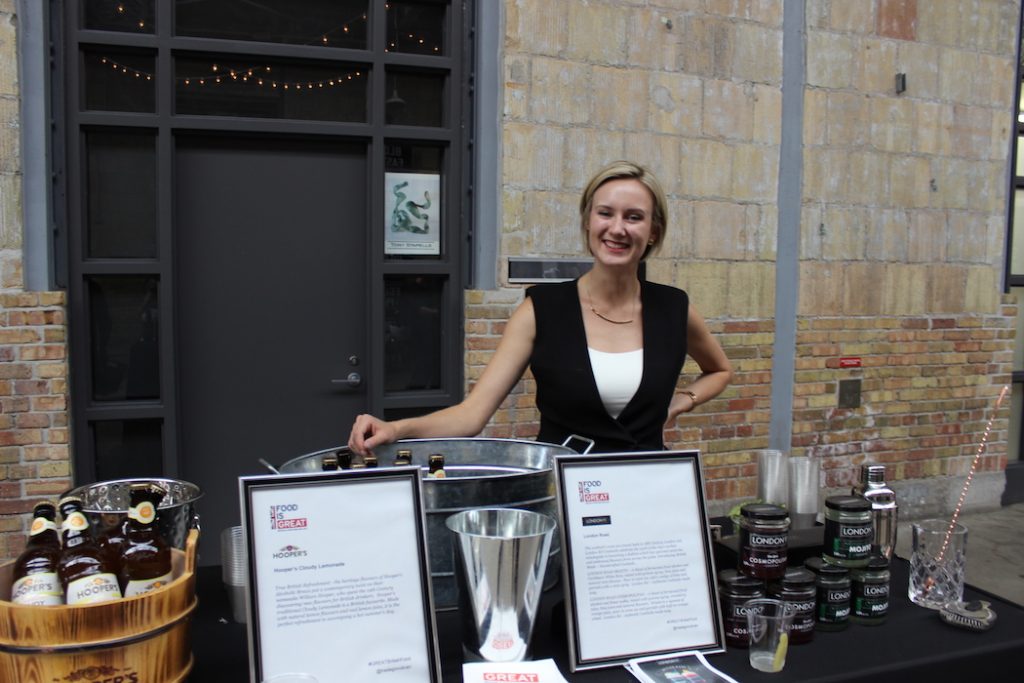 Desperate to wash the taste of butter toffee from my mouth and ease up on my sugar head rush, I found myself in front of Alyson Douglas from Colio Estate Wines, which I learned is also an importer. She poured me a glass of Hooper’s Cloudy Lemonade, which did help. Although… it was also quite sweet, and I wished there was more cloudy lemon juice and less cane sugar. This too with the drinks in a jar by London Road Cocktails: a Cosmopolitan and a Mojito. These tasted true to form and like they had been made with decent fresh ingredients, it’s just that the main ingredient appeared again to be sugar. I was beginning to get dizzy and wondered if I’d be liable for an ASBO if my blood sugar and alcohol levels kept pace. 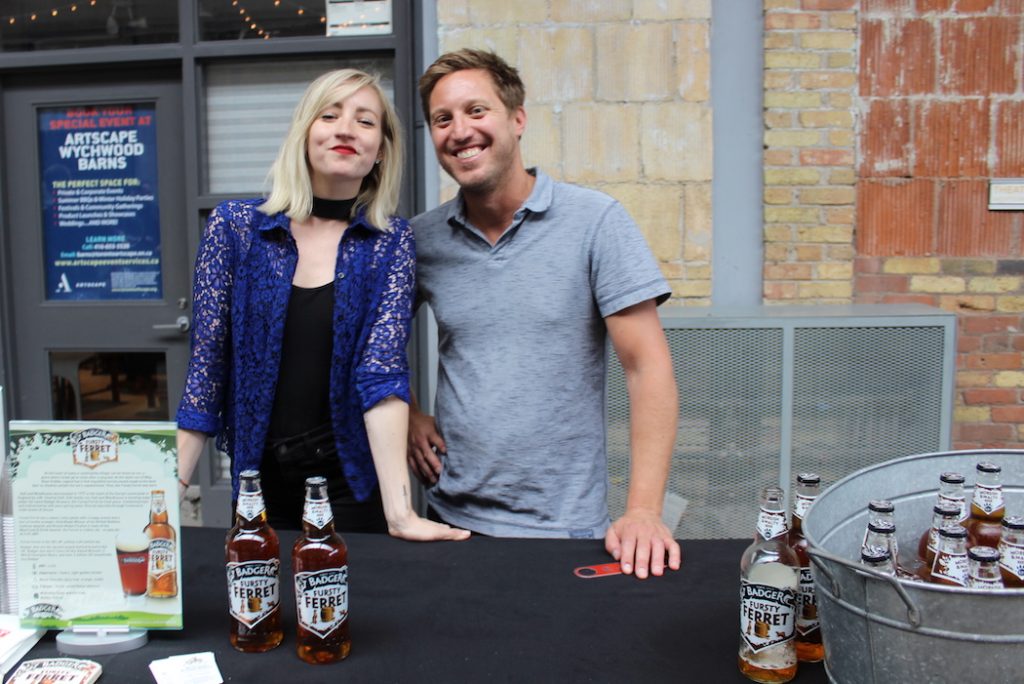 Relief! Andrew Groskorth of McClelland Premium Imports, an agency that specializes in beer, (pictured above with a colleague) saved me with a glass of the Fursty Ferret made by Badger in Dorset. Now, if I was offered randomly a “fursty ferret” without knowing what it was, I might say “no fanks”, but this turned out to be the perfect antidote to all that sugar. Although it describes itself on the label as “moreish and malty”, the Ferret turned out to have a pleasant hoppy bitterness on the finish, which makes for an altogether balanced drink. Look for it in The Beer Store. 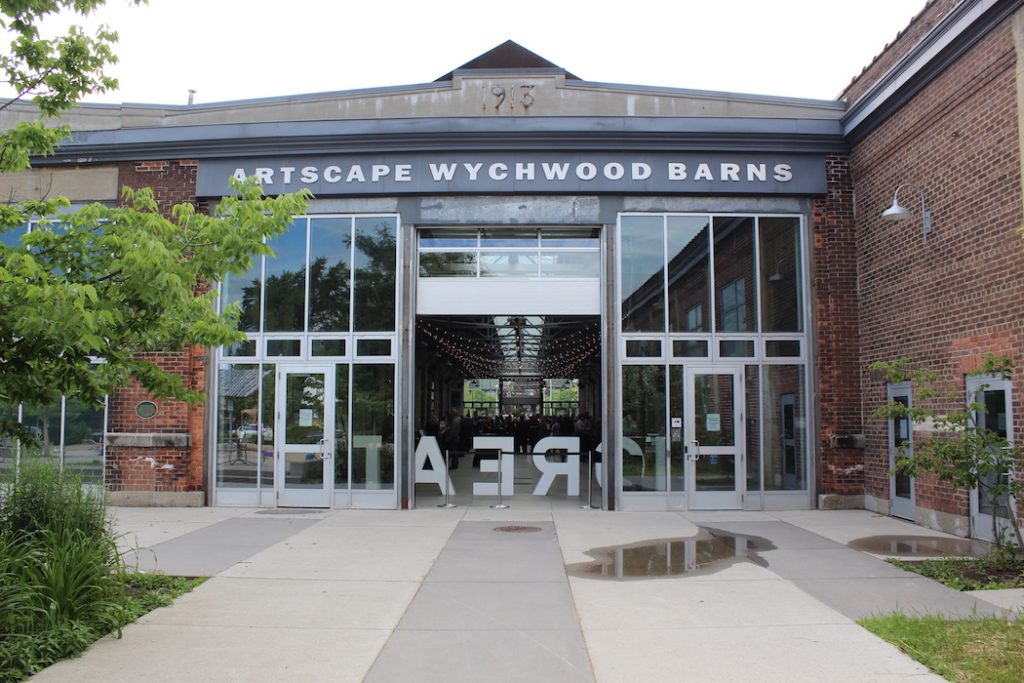 Time had elapsed, and I had to leave the British Beverage Showcase before tasting anything else, including the premium mixes from Fever-Tree and Fentiman’s, which have arguably elevated the art of the gin and tonic as mush as any distiller in the last 20 years. Nor did I get a chance to taste The Benromach single malt from Speyside, which I have enjoyed in the past. As I left, surging with insulin, I determined that although toffee vodka and cosmopolitans in a jam jar aren’t exactly my cup of tea, they surely would be for many others, and at least they were honest products that delivered on their sugary promise. I hope the British keep coming and keep bringing us interesting things at all price levels for all palates. 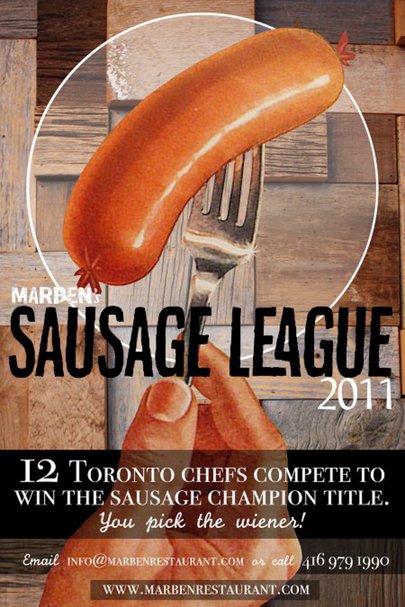