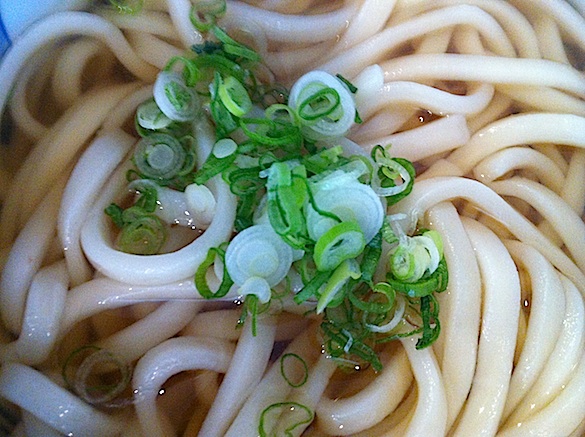 Udon seems so often to be an afterthought on a sushi menu, bundled with teryaki and tempura as consolations for those who’d rather not eat raw fish. So, it’s nice to discover Bushi Udon Kappo, on Yonge south of St. Clair, which gives their homemade wheat noodles in dashi broth top billing, and presents the sushi as an appetizer on their lunch combo. Udon is part of the great Japanese bowl of noodles trio, which also includes Soba and Ramen. About a decade ago, Soba enjoyed a heightened currency among the Toronto fooderati when chef Hiro Yoshisa hosted a regualr ‘Sobu Sunday’ brunch at Hiro Sushi. Then, about three years ago Joanne Kates wrote up the first Kenzo Ramen in the Globe and Mail, and before you knew it, it seemed like Toronto Life was featuring a new Ramen joint every month and David Chang started slinging his alkaline and pork fat for the cream of the hipster crop. Surely, it’s udon’s turn for Toronto’s gastronomic attention.

The restaurant gets its name from ‘katsuobushi’, the dried flakes of skipjack tuna shavings, considered superior to bonito. Bushi Udon uses  katsuobushi along with dried anchovy and mackerel to make their broth. As big and bold as the flavours of Ramen concotions may be, the Bushi Udon broth is light and subtle. And, with the natural umami taste of its base ingredients, it’s considerably less salty. (There is also no evidence of MSG in the broth.) The effect of the katsuobushi-based soup is, in other words, hydrating. So, it’s perfect for Toronto’s hot summer days.

A plain bowl of udon noodles at Bushi, starts at $6.50. The great mass of chewy, thick noodles, crowned in thinly sliced scallions, and swimming in broth is more than enough to make full and nourishing meal under $10. But, it’s worth springing for the under $20 option to get a combo. In this case, more ingredients are added to the bowl or served on the side, like perfectly crispy tempura. And preceding the main event, three small bowls of amuse-like appetizers and three maki each of three sushis. The maki are tightly and perfectly rolled, revealing Japanese chef Koki Oguchi’s formal training.

There’s much more to the menu(s) at Bushi Udon, than the noodles in broth, including cold udon noodles, with dipping sauce, and an extremely rich Japanese curry udon, better suited to colder weather. During the week, it’s full of nearby office workers, and on weekends a mix of Japanese-Canadians and locals, many of whom (like me), bring their kids, who get rewarded for eating their noodles with a wonderfully weird and beautifully presented Bushi Sundae dessert.

Click here to browse the entire Lunch Under $10 series at GFR.

One Response to Bushi Udon