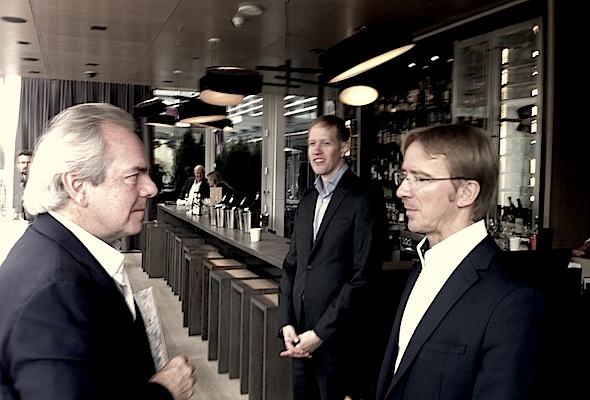 Remember this name: Henriot. Remember it because the Champagne House, one of the few left of any size that are family owned, intends to challenge those big selling corporate brands that dominate the Canadian market. “Why should two brands dominate the Ontario market?” asked Jason Woodman to group of wine writers and sommeliers at Momofuko Daishö. Woodman, who hosted a tasting and lunch on behalf of his family’s importing agency, Woodman Wines and Spirits, wouldn’t name those big brands, preferring instead to make the case that he’s offering Henriot, whose non-vintage ‘Souverain Brut’ Champagne comes many dollars cheaper than the leading brands at $59.99 (LCBO# 959643) as competition. He believes if he can get Ontarians to try a bottle of the Henriot, they’ll switch over.

To plead his case, Woodman brought in Henriot’s winemaker and cave master since 1996 Laurent Fresnet, who led the group through a tasting of the house’s standard NV, Rosé, Blanc de Blancs and three vintage Champagnes: the Millésimé 2005, Enchataleurs (made only from grapes from Grand Cru vineyards) from 1998 and 1990. All the wines can be purchased through arrangements with Woodman, and it was a great treat to taste the two older vintages, which had transformed into toasty, rich and nutty elixirs – very different things from their crisp younger cousins. The 2005, by contrast, was still very fresh and lemony. The Rosé sported distinct copper colour, and Fresnet explained that he blends it “blind” and only to taste, so that its hue doesn’t affect his judgement. It had ntes of strawberry, and perhaps a touch saltwater taffy. The Blanc de Blancs had lovely lemony fruit and caramel undertones. All the wines were tasty and well balanced, but I think the star of the show, and the wine that took us through a spicy Momofuku lunch, was the Brut Souverain.

At least one of those big brand Champagnes, which will remain nameless, has a very distinct flavour profile, which (to my blunt palate, anyway) registers way over to the side of yeastiness. I bet most of us actually prefer a bit more lemon, fruit and crispiness to excite our senses. As Jason Woodman said at the tasting, “Champagne is brand driven,” and I think a lot of consumer choices are made by playing it safe, opting for a familiar label. Too bad for them, because while the Henriot Brut Souverain certainly has  those bready and toasty qualities it balances it with good fruit (apples and lemons) and acidity, bringing a little water to the mouth. Here is a wine to be served with appetizers before a dinner party – or perhaps after dinner to clean the palate and revive the spirit.

To keep the house style, 50% of the wine in Henriot’s non-vintage Champagne is from older vintages. The half that’s from the “new” vintage in bottles of the Henriot Brut Souverain that’s in stores now is from 2008. For this, and many other reasons, making Champagne has much more to do with what happens in the cellar than the field. For the quick video below, I asked Fresnet about those differences and what led him to make bubbles.