Marissa Landrigan has written The Vegetarian’s Guide to Eating Meat. 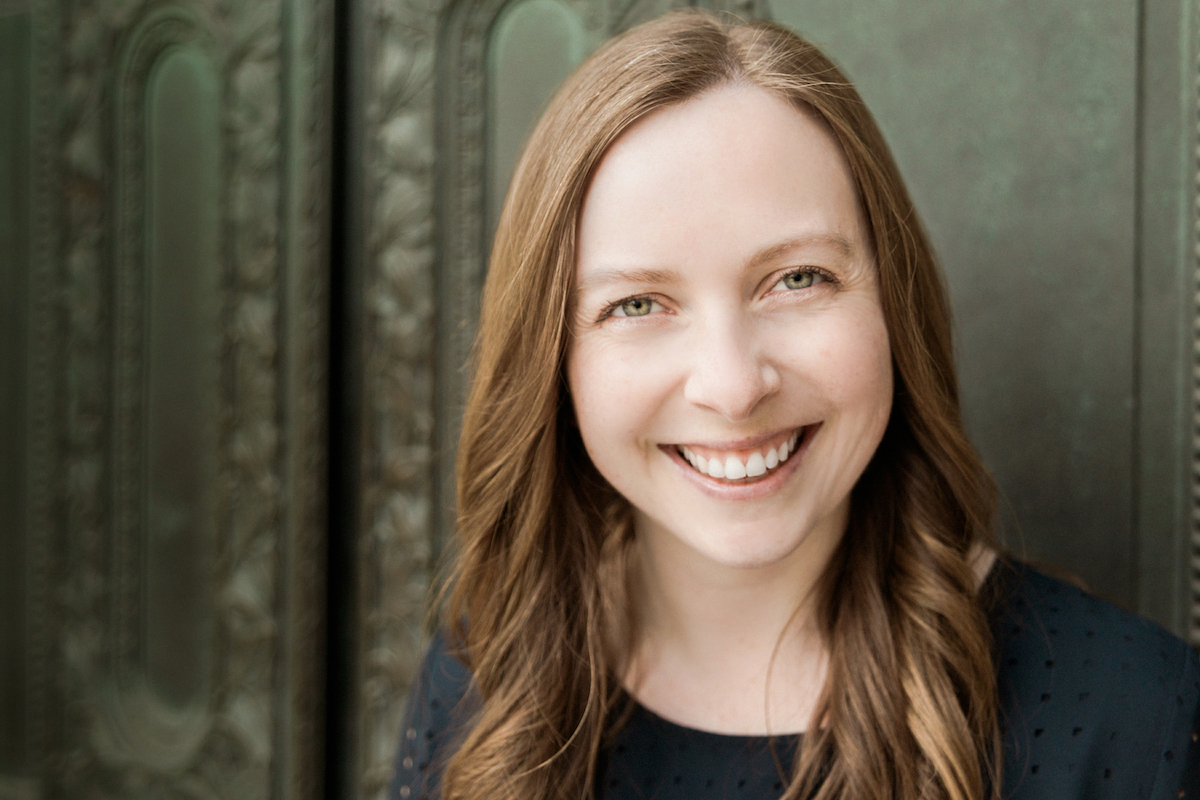 One of the chapters of Marissa Landrigan’s new book, A Vegetarian’s Guide to Eating Meat, is called ‘Cheese Whiz is Vegetarian’. It’s a pretty good four word summary of the futility Landrigan began to sense as she changed her mind about eating meat, which she describes in witty, charming and personal style. What was seeming to be futile for the young American woman was her ablity to reconcile her deep desire to live an ethical life and her strict adherence to eschewing meat. In the interview below, conducted this week by phone from her home in Pittsburgh, the writer and academic explained to me how she came to believe a diet based on ethics that included meat was better than one that didn’t.

Good Food Revolution: Can you tell me about your conversion? 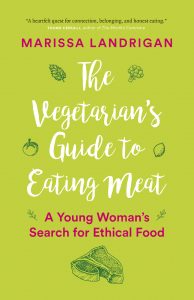 Marissa Landrigan: I became a vegetarian in college mainly to boycott factory farmed meat. I grew up in the suburbs, so until I was in college, I had no idea what modern farming actually looked like and how animals were actually raised on most farms. Once I learned what that was, I was pretty horrified and gave up any and all kinds of meat. I was a vegetarian for seven years, and over the course of that time, through a variety of different experiences, I discovered that life wasn’t as simple as that and cutting out meat didn’t solve all of the ethical issues I had with the way that food is produced. So, after seven years of being a vegetarian, I went back to eating meat. I did this because, instead of boycotting the system I had a problem with, I wanted to actually support the new and emerging systems of sustainable, small scale agriculture that were really impressive and worth supporting.

GFR: Presumably, when you became a vegetarian it required a commitment, an investment. Was it difficult to divest?

ML: Yeah, it really was. I didn’t necessarily want to abandon any of the ethical principles that made me become a vegetarian in the first place. I didn’t want to support industrially produced agriculture. I didn’t want to support factory farming and the environmental destruction and pollution that came along with that. So, what I really had to do was think about how I could continue enacting those ethical principles while eating meat. It was really a matter of picking and choosing where and how I bought all of my food, not just meat but also the produce that I was eating , to ensure I was continuing that ethical investment.

GFR: What were the things that you discovered about the vegetarian diet that made you change the way you eat?

ML: I discovered a couple of things. The first was that it’s remarkably easy in modern America to eat a vegetarian diet that doesn’t actually include that much produce. That, of course, is very unhealthy. There’s so much out there, like substitute meat products, that is processed or pre-packaged. Those products allowed me to just eliminate meat without thinking about re-framing my diet around produce. Part of that was that I wasn’t much of a cook when I became a vegetarian. And I was a relatively picky eater, I was not very adventurous and didn’t want to try a lot of new things. So that was something that I particularly struggled with. But then, on a broader scale, I also discovered that there were ways that produce was grown in the food system that were just as unethical as the way factory farms treated livestock animals. For example, I discovered the incredibly high rates of cancer among modern American farm workers, who are constantly exposed to dangerous chemicals in the form of pesticides and herbicides. The fact that most of those workers are undocumented migrant workers, without legal rights or recourse in the United States, made them all the more vulnerable. I had a real issue with the labour conditions that many vegetables were grown in. And finally, I discovered the connections that a lot of multinational food corporations have in the organic market. There is such a thing as large scale, industrially produced organic agricultural production. So, for example, buying a Morningstar Veggie Burger meant that I was ultimately supporting the Kraft Heinz corporation, which also produces Oscar Meyer products. So, I was spending my food dollars in essentially the same way that I would have been if I was buying industrially produced meat.

GFR: OK, I understand why you want to avoid industrially made food, but how do you get to the place where there is a piece of meat on your plate?

ML: Right. Really for me, that happened when I was living in Iowa for a couple of years for graduate school. Iowa is the belly of the beast, when it comes to industrial agriculture. There were literally Smithfield and Tyson plants in the immediate surrounding area of where I lived. But I started shopping at the local food source. There was a co-op, and I started going to the farmers markets. I met a lot of really innovative and environmentally conscious local farmers doing small scale, bio-dynamic models of farming that included livestock production. For instance, they were raising pigs in order to produce fertilizer to grow their organic vegetables. They were using chickens as a natural pest control, and a natural way of tilling the soil, allowing it to turn over more quickly. So I thought, wow these farms are raising meat in a way that really feels right. They’re respectful of the land and they’re respectful of the animals that are part of their farming system. I thought, it doesn’t make sense to me that I am supporting a major industrial food corporation when I am buying Morningstar instead of supporting these small, local farmers just because they’re raising pigs and chickens and cattle. So I thought it made more sense for me to buy into a system that was really integrative and really sustainable. This was closer to the model that I wanted to be supporting when I stopped eating meat seven years prior.

GFR: Of course. When you were describing the farms, I thought, oh yeah: bio-dynamic farms need animals for all the natural inputs. But back to you: as a convert, do you get much blow-back from the vegetarian movement?

ML: You know, it’s really interesting. In some ways I do. In other ways I don’t. I find that most of the blow-back I get comes from the movement at large, from random internet commenters; people I don’t actually know or have conversations with. But in all seriousness, because I know this sounds like a joke, some of my best friends are vegetarians!  I have close friends who are vegan, and when we have conversations about food and our dietary choices we find we have much more in common than we have in difference. We all care about what we want to put on our forks.

GFR: Right, because your kind of omnivorism, or carnivorism, is very specific and comes with a pretty well defined baseline. Do you have a formal criteria, or is it more like you know it when you see it?

ML: It really is a know it when you see it thing. I’ve found that trying to define criteria can seem to be part of the problem. There was research study from the magazine Vegetarian Times that focused on people that stopped being vegan or vegetarian and asked them for the reasons why. I think 43% of them said that they found it too difficult to be pure all the time. I take the same attitude when I try and be an ethical omnivore. I know the kinds of things that I care the most about supporting. For me that’s generally local farms with sustainable farming practices: the ones that are the least damaging to the environment and have the most fully bio-dynamic practices, the ones that don’t use hormones or antibiotics that are unnecessary, and ones that are organic, because I really do believe that’s better for the long-term health of our bodies. I also think it’s really important to care about the human face of food labour, the people who are growing, harvesting and packaging the food as well. So, I try and hit as many of those check marks as I can. I usually can’t hit all of them at the same time. And, in the modern food system all of these things are still rare, so this kind of food is often more expensive, so you have to make some trade-offs. I’ve found that making the perfect the enemy of the good is problematic; you don’t want to get overwhelmed and end up at Burger King or whatever! [Laughs.]

GFR: Indeed! Hey, there’s something else I want to bring up. GFR is a food and wine website, so while we are certainly focused on artisan production and interested in innovation and sustainability in the food system, we always want to know about flavour and taste. We want to know about the enjoyment of food. I hope that improved for you too since you changed your diet. Do you enjoy what you eat more than you did?

ML: So, so much more. It’s really a win-win. As I am sure you and your readers know, food that’s grown locally and seasonally is so much better than food that is out of season or had had to travel great distances to get to your plate. It’s the difference between a watery grocery store tomato and a ripe backyard, in season tomato. The difference is incredible. One of the things I discovered when I started participating in community supported agriculture programs was that I actually liked a lot more vegetables than I thought I did. I just hadn’t been getting them from the right places. I also found that I developed more of a connection with my food. Previously, my relationship with food was all about restricting what I could eat and what was off limits. Now, it feels like I am being much more mindful about the choices I make and I am seeking out the food that I really want and I really do enjoy it. And, throughout this process I’ve learned to really love cooking. That’s something I never thought I was any good at and that I struggled with a lot when I was younger. I absolutely love it, it’s one of my favourite things to do. I love trying a new recipe, or buying completely unfamiliar ingredients and figuring out what to do with them. That kind of investment in your food, and that kind of connection to it, always makes it taste better and makes it so much more enjoyable.

Find out more about Marissa Landrigan and her writing at marissalandrigan.com.