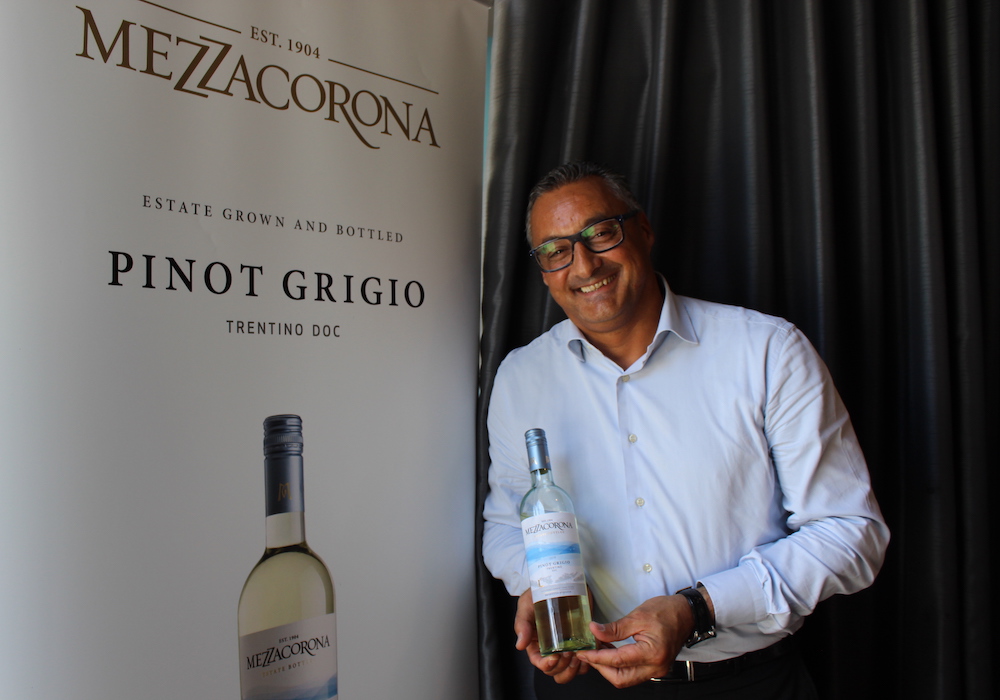 Lucio Matricardi is a winemaker and ambassador for Mezzacorona, a wine making cooperative based in the Northeastern Italian town of Trento with wineries in Sicily. I met him recently in Toronto at a lunch hosted by Mezzacorona’s Ontario agents Woodman Wines & Spirits. Matricardi, who holds a PhD in oenology, is a gregarious man who is proud of Mezzacorona’s history and the wines he and his colleagues make. He led me and a handful of wine journalists through a tasting of seven wines from Trentino and Southwestern Sicily while he told the story of this unique company. Mezzacorona was begun in 1904 by 13 farmers, he explained, and now is owned by 1,600 farming families, making it the biggest cooperative in Italy, although the region of Trentino DOC is, by contrast, the country’s smallest appellation. The began to invest in Sicily in the 1990’s, he said, and have reinvested their profits from them into more production on the island. Here are the eight wines we tasted…

Rotari Brut 2014, Trento DOC
The Trento DOC is a kind of sub-appelation of Trentino in that it is reserved for the production of sparkling wine. It is the second sparkling wine appelation to have been formed, and like the first, Champagne, its wines must be made from only Chardonnay, Pinot Noir, Pinot Meunier and Pinot Blanc, and undergoes secondary fermentation in the bottle. The 2014 Rotari was crisp and bright with fruit notes running from apple to peach with a pleasantly firm mousse. Incredibly, it is being sold on consignment through Woodman for $19.95 a bottle.

Mezzacorona Pinot Grigio 2018, Trentino DOC
The DOC Pinot Grigio is the workhorse of the Mezzacorona line. It’s $14.95 and widely available at the LCBO (SKU# 302380). The 2018 was well made: balanced, stone fruit forward and round to counter its acidity. I don’t taste a lot of $20 Pinot Grigio and I approached it with no small amount of  wine snobbery, which it immediately dissipated. I would recommend it to anyone looking for a well priced patio sipper.

Mezzacorona Chardonnay 2018, Trentino DOC
Lucio Matricardi joked at the table, “The French stole our Mona Lisa, so we stole Chardonnay”. Chardonnay has been grown in the Trentino section of the Adige Valley, for use in the Trento sparkling wines, for a long time, and Lucio argued that it was ideally suited to the soils. The Mezzacorona Chardonnay certainly expressed the crisp and mineral side of the grape, as well as a rich stone fruit flavour. I thought it was a kind of fatter cousin to the Pinot Grigio and I hope some gets to our market, assuming it’s priced comparatively to the Pinot Grigio, it would be a good bargain.

Mezzacorona Riserva Pinot Grigio 2017, Trentino DOC
The Riserva is a fancy Pinot Grigio which will be sold at $17.95 when it is released into the LCBO’s Vintages program in January 2020. It’s sourced from a particular sub-region and is aged in oak, which can be clearly discerned with vanilla notes over it’s bright fruit, which tends toward the tropicals.

The Castel Firmian Pinot Grigio was the last white, so we moved from peninsular Italy to insular Italy and the Sicilian red wines from Stemmari.

Stemmari Nero d’Avola 2017, Sicilia DOC
This Nero d’Avolo is grown and made near Menfi, and is as solidly made as it is typical. Also slated for release at Vintages in January of 2020, at $14.95 it’s has an excellent quality to price ratio and shows good dark red to blue (plums) fruit and a line of earthiness typical of the grape.

Stemmari Cabernet Sauvignon 2016, Sicilia DOC
There is good baseline of Cabernet cassis  in this wine that’s set for the October 19, 2019 Vintages release, and it’s part of a whole package of fully ripe, big fruit. There is also a pronounced vanilla and oak flavour to this wine, which will appeal to those who like that taste profile. At $15.95 I would recommend this wine to my friends who regularly spend $10 more for less well made wine from warm climates made in this style.

Stemmari Hedonis Riserva 2015, Sicilia DOC
This is a weird wine that I was prepared not to like. It’s an experiment: a blend of 50% regularly ‘fresh’ harvested Nero d’Avola and 50% grapes that have been dried out in the appassimento style of Amarone. It also includes, in the blend, some wine aged in both French and American new oak. Both of these techniques are red flags to my palate… And yet it works. It more than works, its delicious. Super concentration of purple and black fruit is more than enough to offset the oak, which integrates well and gives structure to what might otherwise be overly jammy. It’s available through Woodman’s consignment program for $36.95.