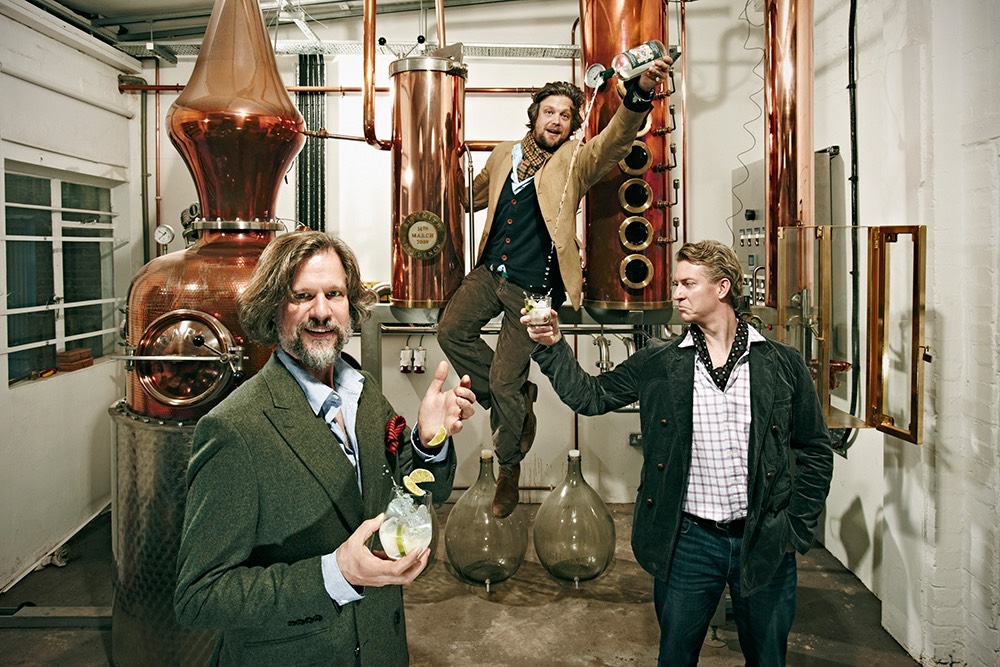 Sam Galsworthy worked for the London brewery Fuller’s for many years before he and his friend Fairfax Hall decided to channel the energy of the craft food and drinks movement into their favourite drink gin. Once they’d recruited Master Distiller Jared Brown, they created the first London Dry Gin to actually be made in London in 200 years, Sipsmith in 2009. Sipsmith became a quick favourite among London’s top bartending crowd and quickly gained the attention of gin drinkers and cocktail enthusiasts. As the brand grew in reputation and in sales, Sipsmith also gained the attention of industry giants like Suntory Beam, which bought a controlling interest in the company two years ago and has opened up its distribution network so that the gin can be found in many more places. Galsworthy, Hall and Brown remain embedded and active in the company, and one of Glasworthy’s duties is to travel the world and tell the Sipsmith story. It was in this capacity that I spoke to him on the phone recently, when he was in Toronto to host an event.

Good Food Revolution: I read about you before I tried your Gin. About two years ago a young English woman called Olivia Williams wrote a great book called Gin Glorious Gin, and I interviewed her for it.

Good Food Revolution: I remember you were featured in the chapter about the renaissance and new wave of gin making in the UK. Is it true that the authorities wouldn’t give you a license to distilll alcohol because you weren’t going to make enough of it?

Sam Galsworthy: That’s exactly right. There were a number of problems that we had to get over. One of them was when we went to the government and said, ‘We want a license to distilll gin and bring gin back to London again, and what do we have to do to do it?’ They explained that you couldn’t own a pot still under 80 hectolitres. It was a law that dated back to the Gin Act of the 1700’s. It was thought that if you had a pot still under 80 hectolitres, you could hide it from a government officer!

Good Food Revolution: You would be a bootlegger, avoiding the taxman!

Sam Galsworthy: [Laughs.] Exactly. We had seen the craft movement in North America, and we really believed people wanted to know more about what they were drinking: who was making it, where it was made, how it was made, and with what it was made. We believed the mindset of the consumer in London would react similarly if there was the right opportunity. So we convinced the government that there was a need for this and that there was a demand to know more. It’s not just about organic food, it’s also about authenticity, although that’s a cliché word and now overused, and it’s about transparency. The last gin maker in London was Beefeater, set up in 1820 and there had been nothing else since. All the gin companies, the Gordon’s, the Tanqueray’s, the Booth’s – for different reasons, but principally to seek lower ground rent – left London, the capital, the city where London Dry Gin was invented. They didn’t think being in London was important, but we did and we convinced the government that it was, and in the long run our little still would be good for the government because we believed it would open up a new category of craft distillling. They changed the law and it has been very good for revenue, because for the first time in history, Gin revenue is higher than beer last year!

Good Food Revolution: Wow. And you really were the first…

Sam Galsworthy: The first gin distillery in London in 200 years! But the most important thing about us is that by getting the law changed, it’s enabled many more gin stills to open up. There are new brands, methodologies, and even gin making philosophies brought back to London. That’s really the best part of all of this. I know that will sound trite to some people but when we started there were 12 gins in all of the United Kingdom and now there are over 220. That’s just in nine years. I think that’s a really exciting legacy.

Sam Galsworthy: No! We adore gin! I have been enjoying gin from an inappropriately young age. I grew up outside of Plymouth and I knew all about gin. My best friend [Sipsmith co-founder Fairfax Hall], who’s been with me all the way, and I used to drink gin when everybody else was drinking beer. We’re passionate about it! Being pioneers of the movement, as recorded by Olivia, is very humbling, though we’re very pleased to be recognized because we made a lot of sacrifices to get there. So, our journey just continues with gin.

Good Food Revolution: Then, let’s talk about your gin. Sipsmith is a classic London Dry Gin. I mean there’s nothing weird or particularly strange about the way it tastes. It’s certainly aromatic, and smells and tastes of juniper, as a gin should. Was that a conscious decision not to go too crazy with the botanicals?

Sam Galsworthy: I am so pleased you picked up on that. I truly am, and this brings back an important point, which is that Sipsmith is where it is because when we started we were lucky enough to meet a man called Jared Brown, our master distiller. We had quite a background in cocktails, spirits, brewing and distillling. When we invited him to be our master distiller he said, ‘Look, I’ll only do it if you commit to making a very classic style gin, the way gin used to be made, the way gin should be made.’ And that’s the most important thing of all about Sipsmith: we’ve inherited 200 years of gin distillling history and we have a duty to follow that philosophy of making gin. You’ve picked out exactly what Jared wants. It’s a classic gin, humble in profile, not dominated by one specific botanical, not one thing that’s making more noise than the other, not loud and aggressive but balanced and understated. The beauty of gin is the versatility of it, which you don’t get with these sort of left-field gins made with exotic ingredients. While there will always be a place that in the gin world, our feeling is that bartenders are leaning for more towards something that gives them far more options. And if you have a really great story behind a really great liquid, then you’re actually already half way there, because the best bartenders actually want to talk to consumers about Sipsmith and get behind it and believe in it. So, Jared gave us our True North, which was ‘gin the way it should be’.

Good Food Revolution: Which is what exactly?

Sam Galsworthy: What he meant by that was the old way of making gin, where you take your classic recipe of botanicals and rack them onto a spirit, macerate them, distill it, get rid of the head and tails (so you only use 60% of the spirit) and then cut it with water to get it to bottle strength. Our methodology is ‘one shot’ distilllation. You have one shot to get it right, and it’s more of an art form than industrial distillling, and it was lost until Jared brought it back, because that’s not how gin was being made. There’s a short cut way where you add more botanicals, leave them in for a day, distilll it and take your hard cut. What you’ve got then is a concentrate. It’s not your finished gin, so you can’t add just water to it. You need to add a neutral spirit to that hard cut, which dilutes it and stretches it, and then you add water. And the important thing there is that the neutral spirit has not gone through copper. Copper is such an important part of a gin’s quality. If you use copper to distill something, there’s a chemical reaction that takes place and extracts sulphurs and fatty acids out of the alcohol. It’s as though the skin of the copper is a living thing and it plays such an important role. So, that’s why our gin is a one shot gin, even though concentrate will make you more gin out of one batch, we’ll never compromise. We’ve got three pot stills at Sipsmith with five distillers. It’s an inverted ratio. If you’re making a concentrate, then you might need only one pot still and maybe only two distillers. But we have made a commitment for life to make gin the way it used to be made and the way is should be made. If that means keeping an inverted ratio of distillers to pot stills, and growing the population of our pot stills, then we’ll do it. It’s an expensive commitment, but I love that commitment because it’s the right one. We are single minded about being around in 200 years time. We want this brand to be a reference for generations to come. Not just because we changed the law, or that we made a really good gin, there’s got to be an internal ambition and that, to me, feels much more powerful.