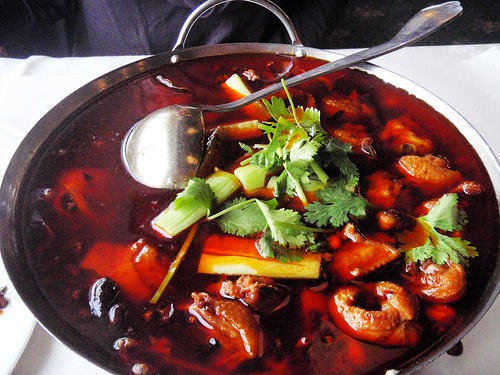 It’s Jamie Oliver’s fault. Used to be I’d have a splash of Tobasco once and a while on a burger, or try a spicy curry for take-out Indian, but my addiction to chili peppers didn’t really begin until someone gave me Oliver’s first cookbook, The Naked Chef in the late-90s. I started cooking with the fresh long red ones he loves. I fell hard, and pretty soon everything from breakfast to midnight snacks would incorporate chilis in one way or another. Now, with little kids at my table, I cook less with chili and rely on things like homemade chili oil and hot sauce to maintain my fix.

While Mexico, Southeast Asia and India are natural pilgrimages for the chili addict, the equivalent to Mecca must be China’s Sichuan province. There, or so I’ve read, the numbing effect of the native Sichuan pepper allows the local population of spicy lovers to truly overload on capsaicinoid-driven heat, and the chili high we addicts adore. This sounds like the culinary equivalent of a speedball, and my curiosity was peaked when I read a passage written about a Chengdu meal by Anthony Bourdain, who claimed to have reached a sort of elated state of gastronomic consciousness over a Sichuan chicken hot pot. While I’ve yearned to go to Sichuan since I read about it in Fuschia Dunlop’s 2008 memoir, Shark’s Fin and Sichaun Pepper, it looks like it will be a while until I get there, so  I decided to see what I could find closer to home in and around Toronto.

A quick Google exercise led me to a review of Ba Shu Ren Jia on the Scarborough-Markham border by Joanne Kates. This Steeles Avenue strip mall joint was good enough to be included in her 2010 top 100 restaurants in Toronto list for The Village Post and in her original 2009 Globe review, despite the glowing recommendation, Kates had complained some dishes were obscenely hot. Perfect! 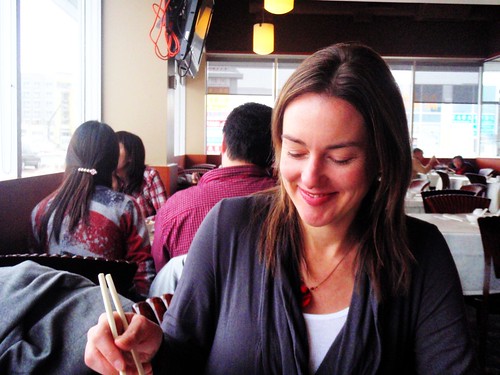 Laura Calder has become a friend since I met at an interview for Gremolata years ago. Before Laura became a TV host and celeberity she was (and still very much is) an accomplished cookbook author, and before that she worked for Anne Willan at Burgundy’s famous Ecole de Cuisine La Varenne. In other words she is both a dedicated teacher and student of good food. I wanted a partner in discovery and as ever, she was up for an adventure. I figured I could count on her rather refined palate to help me figure out what we might be served, and talk about it while we digested. For reasons that become apparent below, I abandoned note taking, so I am recklessly asserting that my account of what followed is a reflection of a consensual view…

Ba Shu Ren Jia may or may not translate to ‘Red Chili Pepper Restaurant’, but a sign in the window read the latter. (Again, this was really encouraging.) It’s a big room, with big windows looking over a deep suburban landscapse of strip mall parking lots and Steeles Avenue. The inside is clean and simple – I would happily bring my mother. The centre of the room is full of big round tables that seat eight, while the perimeter has square tables for four. The menu, which is laminated with pictures of some dishes and English translations to most, is big – too big for the two of us order comprehensively. (Better to come in a party of eight.) We order pea shoots and a dish of kale for greens, and then something called “Twice Cooked Pork”, a Chicken hot pot (at my insistence, in hopes of Bourdainesque Scoville scale ecstasy) and Gung Bao Chicken. The latter feels wimpy, Kung Pao chicken is surely white devil’s Chinese food? But, all reviews say it’s really good and were not sure about what we’re getting otherwise, so we order it for fun. 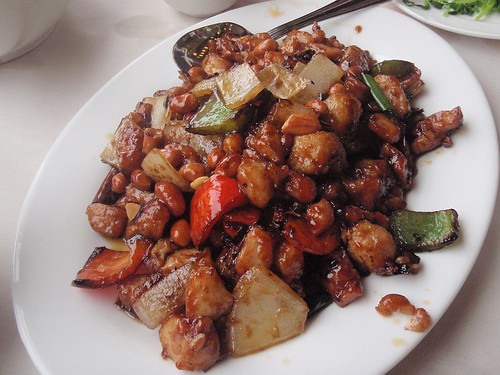 The kale turns out to be gai lan, or Chinese broccoli, done as one would find on Spadina: sauteed with garlic and soy – not revelatory, but good enough. The pea shoots are delicious. They’re the fine, baby ones that popped up on nouveau, nouveau plates about a decade ago. They are are cooked perfectly al dente with just a touch of garlic.

The twice-cooked pork was belly, cut in rashers like bacon. It was good, and had a nice soft burn from the chili oil it was lathered in with scallions. But the dish was really salty and, really, how much oniony bacon do want for lunch? One or two strips from a big plateful was enough.

The hot pot (pictured at the beginning of this piece) looked beautiful, but it absolutely confounded us. There were small bits of boney chicken swimming in oil, that was heated by a sterno lamp. At first we thought it was soup and we poured it into our little bowls, but slurping cooking oil from a spoon turned out to be pretty gross. (It should be noted that the pot came with a ladle, so maybe we had it right and just didn’t like it, or maybe there’s a technique to ladling we didn’t know.) Then, we tried to pick the chicken bits out, but you have to be rather adept at chopsticks to hold a quarter of a chicken wing doused in oil and nibble around the bone. Our table cloth soon had great Jackson Pollock spattles of red oil all about as we grapled with the little bits of fowl on the bone. One of mine was sent flying more than once.

In the end, Laura retained her lady like poise and gave up, while I used my fingers to gnaw on a few of the bony bits. I definitely got the chili, which I enjoyed, and also a lot Sichuan pepper, which has a kind of pine flavour and does sort of numb the mouth. But it just wasn’t working – we were missing a crucial piece of information on how to eat it or had simply misordered. (There was a whole section of the menu that appeared to be about hot-pots, but it was all in Chinese script – maybe we missed out?) 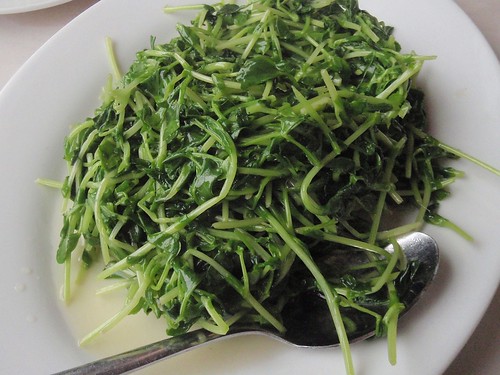 Still, all was not lost. As it turned, out the Gung Bao chicken was sublime… if fiery hot chili and pine-numbing Sichuan pepper matched with sweet chicken, bell peppers, onion and peanuts can be said to be sublime. It can certainly be said to be really delicious. It hits every flavour note and texture: spicy, salty, sweet, umami, crunchy onion, bell pepper and peanut against soft chicken meat. That dish, washed down with a cold Chinese Yanjing beer, was worth the drive itself… it’s one thing we’ll order again when we return.

And so the Odyssey continues…

One Response to Lunch with Laura Calder: Sichuan Adventure