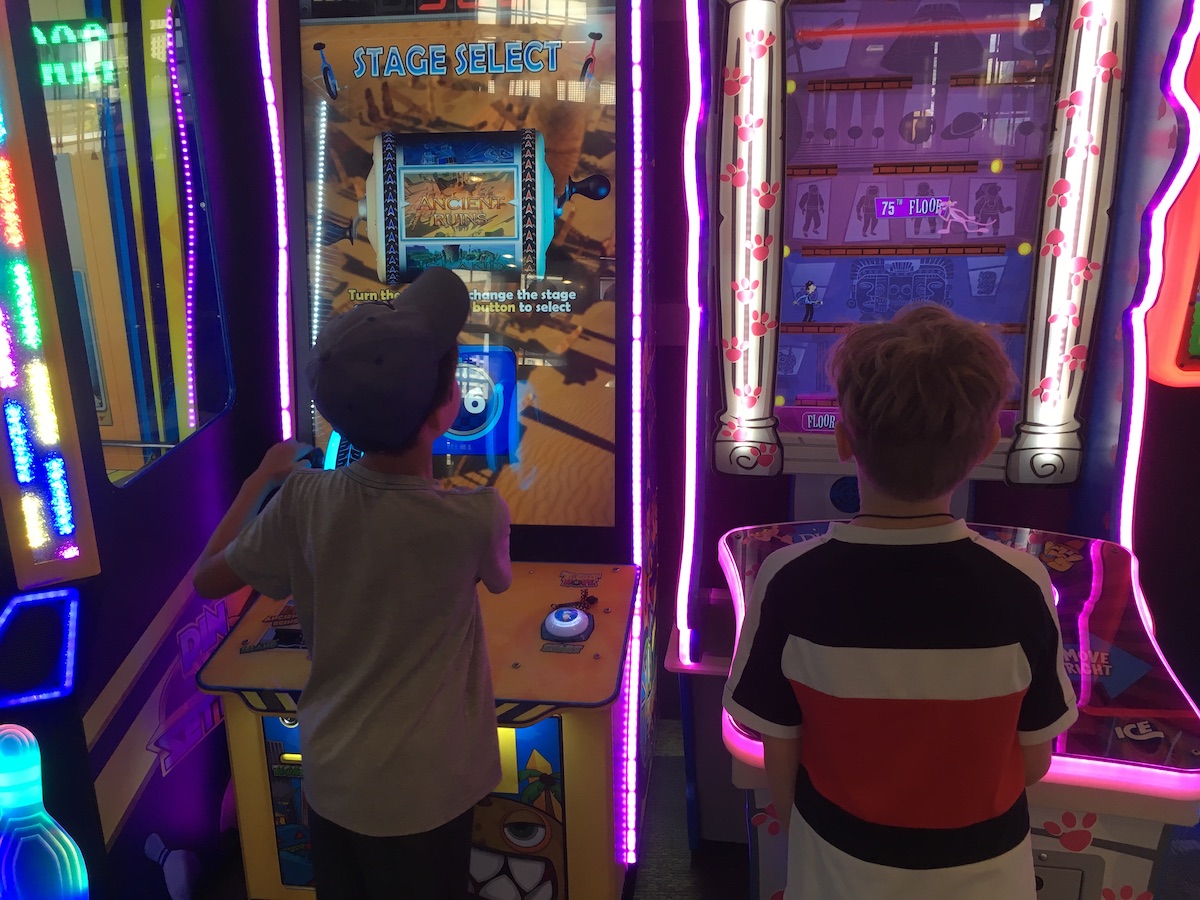 I hadn’t heard of The Rec Room until my son suggested we hold his 10th birthday party there. He said something like it was a pub with games, and I agreed based on the misapprehension that it would entail a pint of craft beer and a club sandwich for me and some board games and chicken fingers for the kids. A pleasant Sunday lunch on a quiet backyard patio. I was wrong.

The Rec Room is not a cozy pub, it’s a sprawling, noisy bombardment of the senses housed in part of the Roundhouse complex at the base of the CN Tower near the SkyDome. Or, the one we went to is, because there are several located across the country, mostly in malls. It’s owned by Cineplex. Before we had kids, Netflix and a giant television, my wife and I would regularly go out for dinner and a movie. I guess Cineplex figured they might as well make money from the dinner part. As one might expect from a restaurant owned and operated by a company whose core activity is showing motion pictures, there are a lot of screens at the Rec Room. Not just the screens on the many aisles of video games in the arcade at the front for the main room, but also all around the tables in the main dining room at the back. There is also music piped in, and of course the sounds of video games and, on a Sunday at lunchtime, a din of excited kids, and not too few adults, hopping from game to game. It’s a little frenetic.

I should make it clear that I was in no way tricked into going to the Rec Room with five 10 year old boys. I volunteered knowingly after visiting its website, which promises “40,000 SQ. FEET OF EATS, GAMES AND ENTERTAINMENT IN THE HEART OF TORONTO!” I was curious. When I was growing up, the concepts of fine dining and movie theatres were more or less mutually exclusive. There were jokes about the hotdog carousels at cinema concession stands, and speculation about what might actually constitute “buttery topping”. Also, when I was growing up, I loved the high-concept restaurants of Toronto, especially when I was the same age as my five dining companions. Mr. Greenjeans and The Organ Grinder were especially fun, the latter at least was certainly noisy and full of video entertainment. I imagined the Rec Room might be a sort of modern version of these two old early 80s standbys.

What I hoped The Rec Room would not be was a modern version of Chuck E. Cheese. I took my 10 year olds older brothers to Chuck E. Cheese a few years ago, and wrote about it here. Expecting a little ironic mirth, I was genuinely horrified by the atrocious factory made food, super sugary drinks and addictive and expensive mechanical games of chance (masquerading as skill) off of which small children had to be pried. From the looks of the Rec Room website, it appeared more sophisticated. For one thing, the website advertised a wine tasting event, and a regular Sunday drag brunch*. Also, all the dads of my son’s friends had been there; I gathered as part of some kind of corporate or client team building event, or as a precursor to catching a ball game. They all thought it was great idea for a 10 year old’s birthday, although I did note that none of them took me up on an invitation to join the party. In any event, when the six of us left from Summerhill station bound for Union, I had an open mind and was optimistic about the next few hours, as long as I didn’t lose a kid on the subway.

I am both an only child and a child of divorce, so I spent a good deal of my tweens and early teens as one of my parent’s dining date until they both remarried. If you can think of hot restaurant in Toronto between 1981 and 1986, I probably went there and knocked back a few ginger ales and orange juices with my carpaccio and penne alla vodka. So, I have understood since childhood that there is a confluence between dining out and entertainment. But I am not so sure they should be so closely linked. If I had only one more restaurant meal to have, it would be at St. John, Smithfield in London. Part of the many things that make it one of the world’s best restaurants is the quiet tranquility of its dining. Its proprietors, Trevor Gulliver and Chef Fergus Henderson, have since its founding 25 years ago kept a strict no music policy, and a great deal of its charm is auditory. There is a low murmur of conversation, and the clinking of plates, cutlery and glasses. The effect is soothing and calming and allows its patrons to open up for the excitement of the food. This is not the policy of The Rec Room. The policy of The Rec Room is to subject their patrons with a constant bombardment of the senses. This must be deliberate, and I guess, in this age of smart phones, when we all carry the capacity to hold an arcade’s amount of video games in our pockets, and any and all TV shows or movies ever made, that Cineplex had to go big to get us out of our homes. It may also be deliberate in the sense that it has the opposite effect of the tranquility of St. John and distracts from the determined mediocrity of the food.

I suppose the MBAs that run Cineplex decided since their competency was more entertainment than eats, then they may as well outsource the latter. I don’t know, but I am pretty sure, everything on the big glossy menu came out of a large food service truck. There is an open kitchen at The Rec Room, and outside of the many baskets being plunged into a bank of deep fryers, I didn’t see so much cooking as assembling. I made the classic mistake of going off piste, and instead of my corporate restaurant standby, chicken wings, I thought I’d be adventurous and get the falafel wrap. The falafel at The Rec Room is not the sort of thing Suresh Doss raves about on the radio. The wrap is spongy and doesn’t have any signs of having ever been baked in a oven. Apart from the falafels which lacked both warmth and crispiness, the filling was vaguely middle eastern, but mostly dill pickles, radish slices and shredded iceberg. On the side there was a white sauce which may have meant to be aioli but tasted more like English salad cream. It came, like all dishes that I could see, with one of those tin mesh baskets full of thick cut fries. The fries were actually pretty good, not least because they were well done and loaded with kosher salt. The boys ordered off of the kids menu, and divided between chicken fingers and the burger. The burger kids ate all of theirs and reported they were “good”. The chicken finger kids did not finish all of theirs, so I sampled them and they were not bad at all. The boys drank standard soda fountain pops, while I sought succour in a pint of Steam Whistle Pilsner, since the brewery is next door. We skipped dessert because there was a birthday cake waiting for us back at home. In summation, The Rec Room is not likely to make it on the San Pellegrino list, but it’s not terrible. It’s fine, and it’s not particularly expensive for a downtown Toronto restaurant. If I went back, which I don’t plan on, I would stick to standard corporate pub fare and eat a big salad the next day to make up for it.

If you are at all familiar with ten year old boys, it will not surprise you to learn that my dining companions did not wish to linger over an espresso at the end of the meal. Our waitress helpfully asked us if we wanted the bill and the contraptions that stores the credits that let you play the games. There is a deep discount, she explained, if you buy the thingys as part of your restaurant bill. I’m not sure why; surely the margins on video games are better than burgers? But it was true. Once they had the means to play the games, the five boys scattered quickly from the table and began amusing themselves in the warren of aisles of dozens of bright flashing, noise making games. I didn’t play, I just observed and made sure I didn’t lose a kid. And I topped up their game cards when they inevitably ran out. The games seem to work on a system where you win and lose credits, which are in turn transferable between games. I guess that’s good if you’re good or lucky enough keep a streak going. Some of the kids were, and some weren’t, so some kids cos more to keep playing and some less. It struck me that this a perfect training ground for future casino goers. Actually, quite a few of the people playing the games looked like they were already casino goers. A lot of the players at The Rec Room were adults. Some were clearly parents with their kids, but some were clearly not and ranged in age from the 20’s right into late middle age. In the dining room, too, there were quite a few tables of adults only. A group of friends in their early 30’s sat next to us at a long table and sipped mimosas during their brunch.

I was curious about The Rec Room, but I was also realistic about how much of my day I wanted to spend there, whatever pleasures it revealed. So, I built in a backstop and a deadline: we had to get back to our house in time for the cake before the agreed to pick-up hour. The kids had about 45 minutes of game play, which was also about as much as I was willing to subsidize. When the deadline passed, and all the credits had been spent I readied myself to escort the young men back uptown. But we did not leave just yet. There was one more thing to do, which I had not counted on. I had noticed, next to the arcade section of The Rec Room what I assumed was a store full of the kind of crappy curios tourists might buy, and little kids love. I was sort of right, but also very wrong. My companions patiently explained to me that the games didn’t just reward successful players, they also awarded points depending on what level the player reached.  These points could then be redeemed at the “store”, where the price of each item was denominated in points rather than dollars. I imagine it will not shock you to learn that the line-up to redeem points for merchandise was very long and formed in front of a solitary cashier, whereas there were several, line-up free, cashiers that only sold credits. So parents be warned, just when you think you’ve left The Rec Room, they suck you back in.

*On the Sunday we went to the Rec Room, I was disappointed to discover that the drag brunch was held in a different, out of sight room, than the main dining area, so we missed its participants. I’m not sure whose benefit the segregation was intended; maybe you had to buy a ticket.

» Good Food Culture » What Happens at The Rec Room