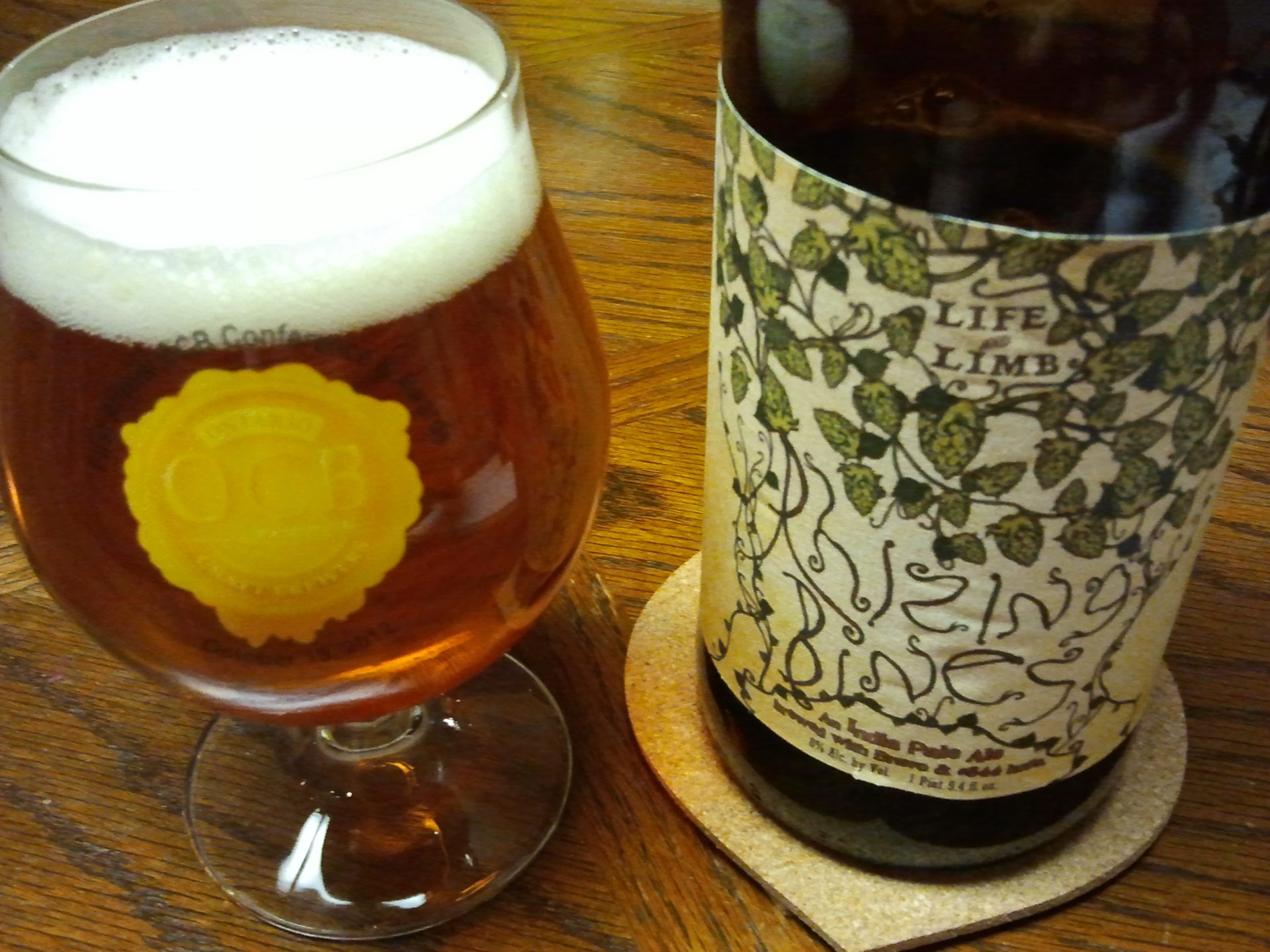 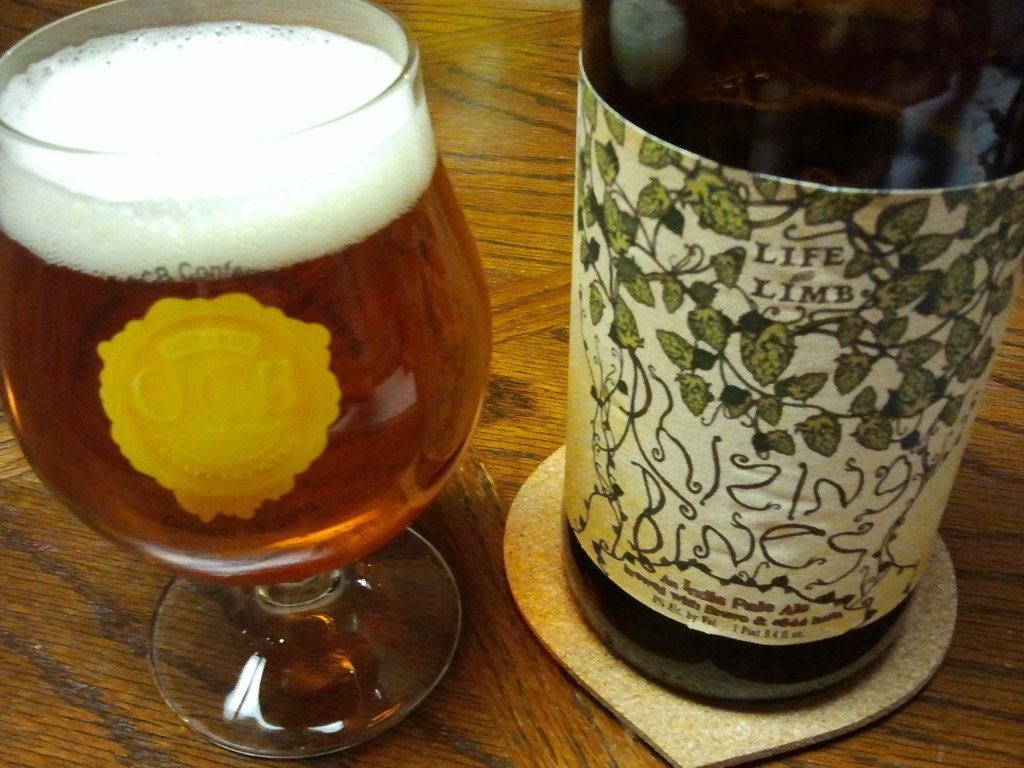 Collaborations are happening with an increasing frequency it seems.  This adheres to Canada, as well as the United States.  There really is no surprise to it though, it is a fun way for brewers and breweries to come together to make a beer (and ideally ferment a fervor for that beer from their fans and thus make some easy cash).  This beer is actually the second in the series of “Life & Limb”, as the first was a rather amazing imperial stout.  I honestly did not expect to see a new Life & Limb that was not simply a repeat of the first one, so I was of course rather surprised when I saw that this had been released using that name.  Before I get into my feelings concerning this beer, let’s move right on to the experience.

A tiny bit of background for the beer – it uses Bravo hops, described as floral and citrusy, and a little known experimental hop 644, which from what I can determine has citrus and passion fruit characters.

To start, this beer pours an honest and straight forward bronze, that is as clear as day.  Oh, but the bubbles.  It is quite lively in that respect.

As one may expect, the nose of this beer assaults you with a sticky-icky hoppy sweetness.  Floral and citrus notes, and has a very big malty sweet component, followed with an end of breads and sugars.

The first flavors to come out of the beer is a large blast of lemon zest/peel intermingled with that same sticky-icky hoppy sweetness.  Following up after this, there is a vibrant yet subtle current of those hop derived florals and refreshing herbs.  Malty and bready flavors come through, bringing along with it some nuttiness, here specifically hazelnuts.  Finally take aways are a brief smattering of black pepper, and a tinge of a metallic note on the tongue, that while in thought sounds awkward, but in practice works out surprisingly well enough.

Overall, the beer has a nice dry mouthfeel, that is light and not very mouth coating.  There is also a light astringent quality to the beer, derived from the hops and water, I would assume.  The bitterness of this beer is mostly noticeable after the swallow and is fairly strong.

Final thoughts on Dogfish Head/Sierra Nevada Life & Limb Rhizing Bines:  While a lot of this sounds good in writing, the total combination of these qualities does not equal the quality one should expect from either of these breweries.  It’s a little too much in some qualities, and lacking a lot of interesting complexity that I feel could be there.  As such, I will give this beer a 3.5 out of 5 apples 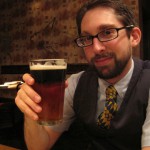 Jared Lewinski is obsessed with beer.  As such, he has uprooted his life in New Jersey to attend the Brewmastery and Brewery Operations Management program at Niagara College, a program that has, for the past three years, been producing top-tier brewers for Canada and beyond.  As a child of the American Craft Movement, Jared has big opinions and a love for big beers.  His hope is to bring an outsider’s perspective to a fascinating and tumultuous time for Canadian and Ontario made craft beer, and the culture that it represents…and is thinking about Summer beers right now. 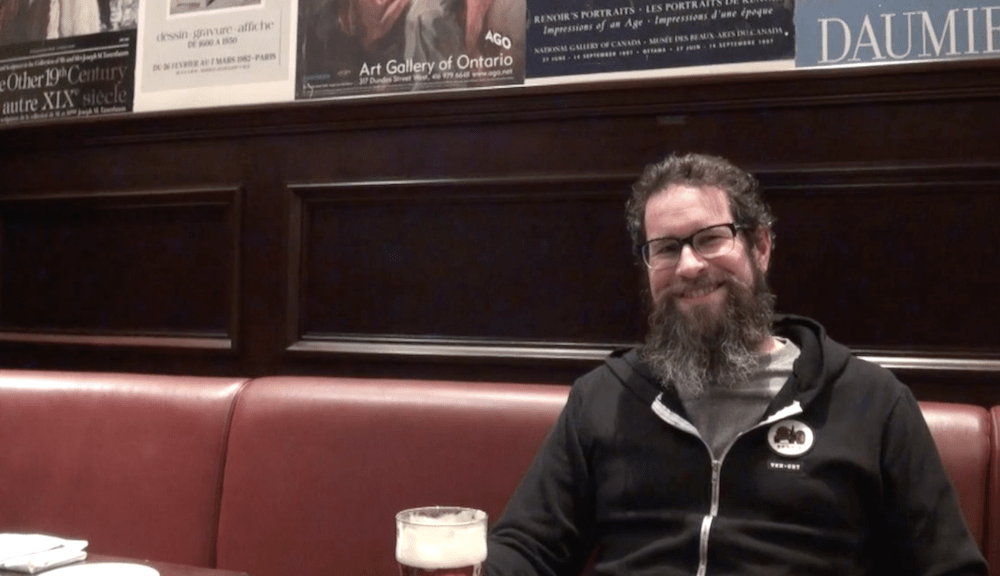 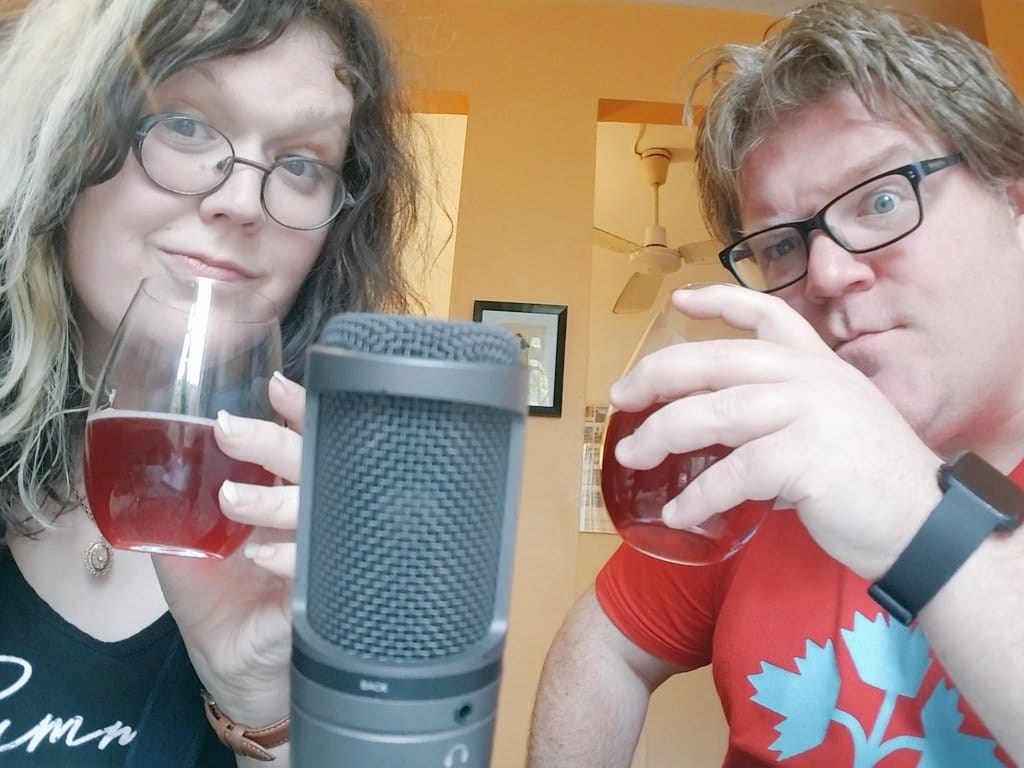 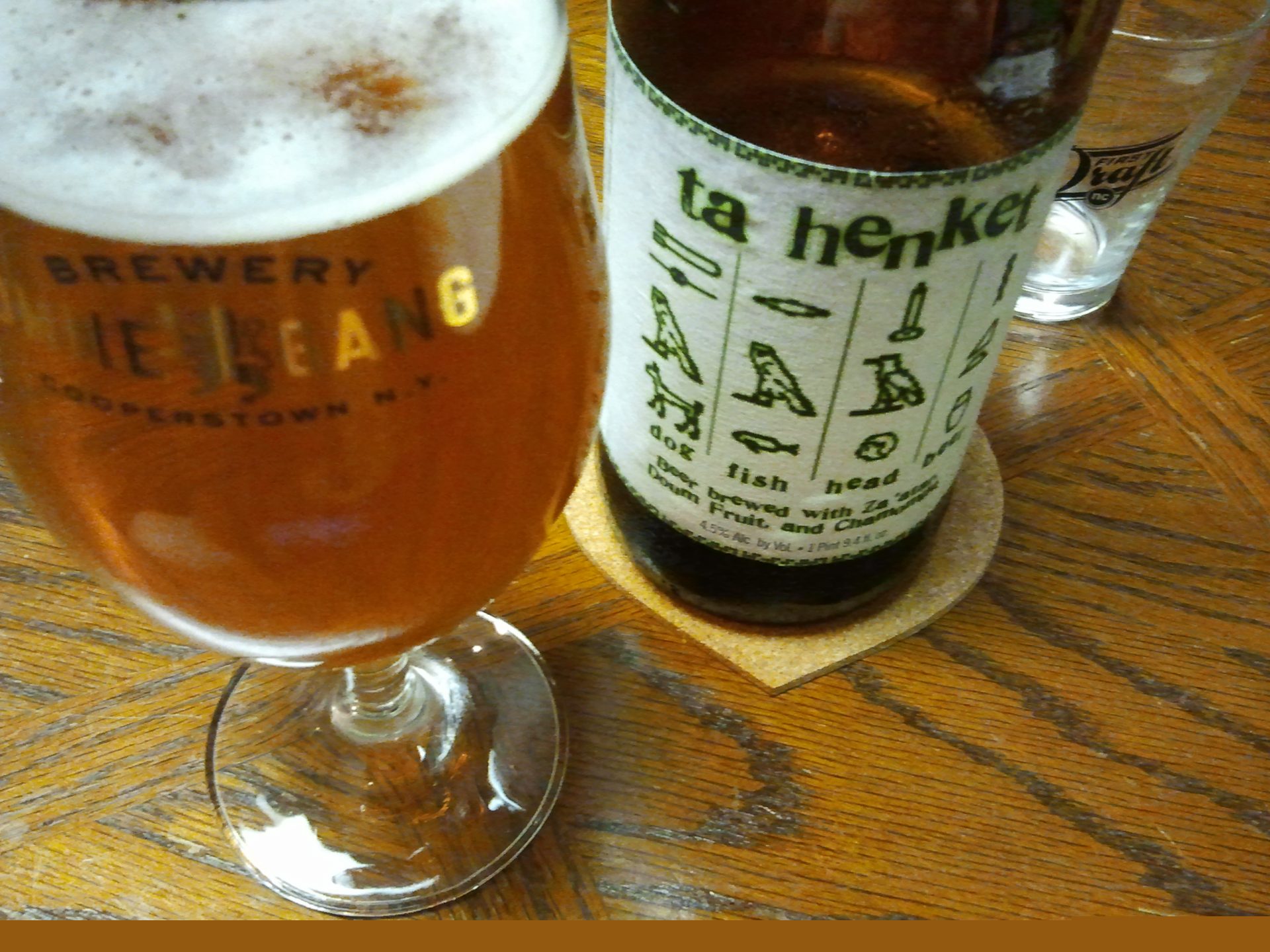 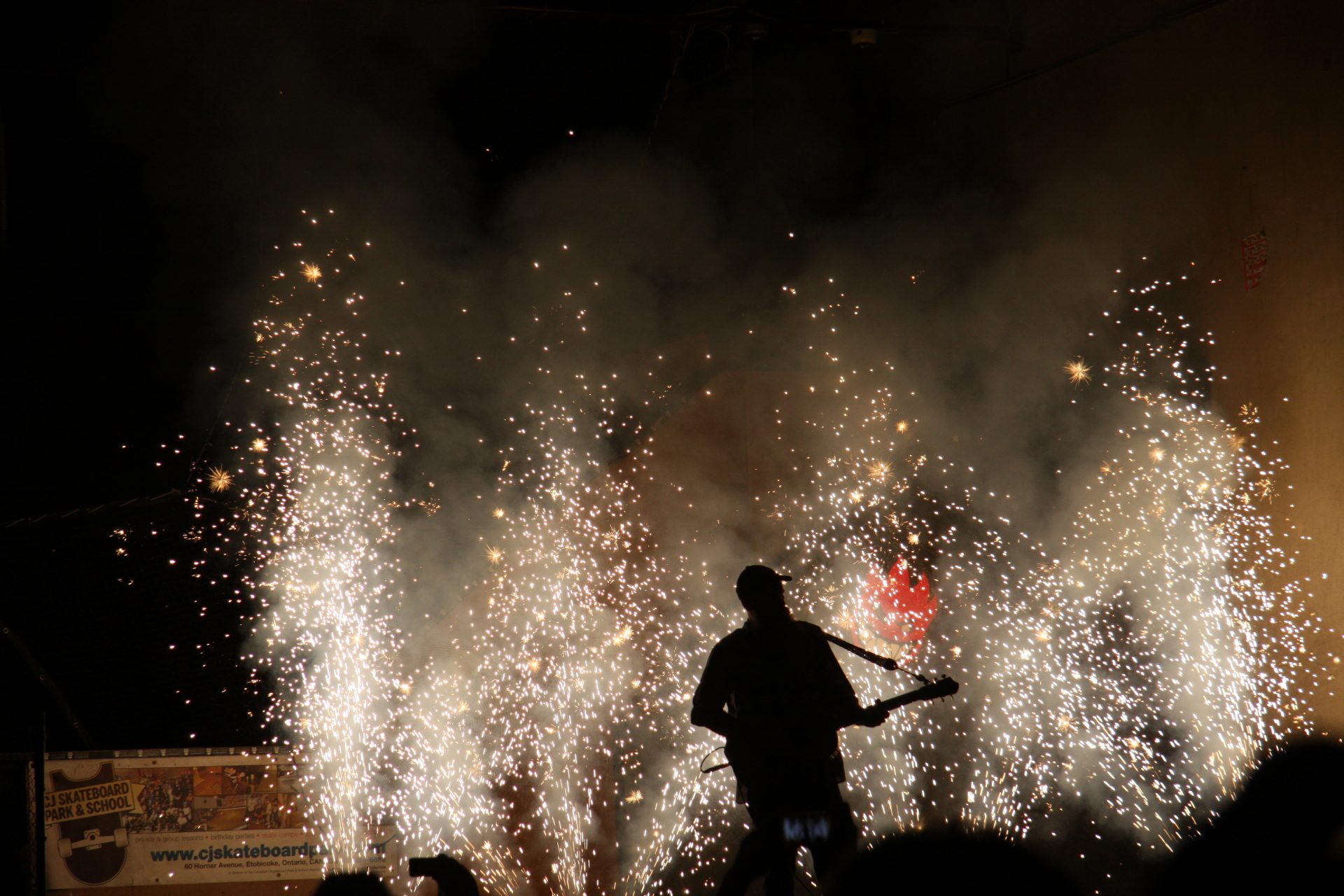