A Vineyard in View: Rosomel Vineyard 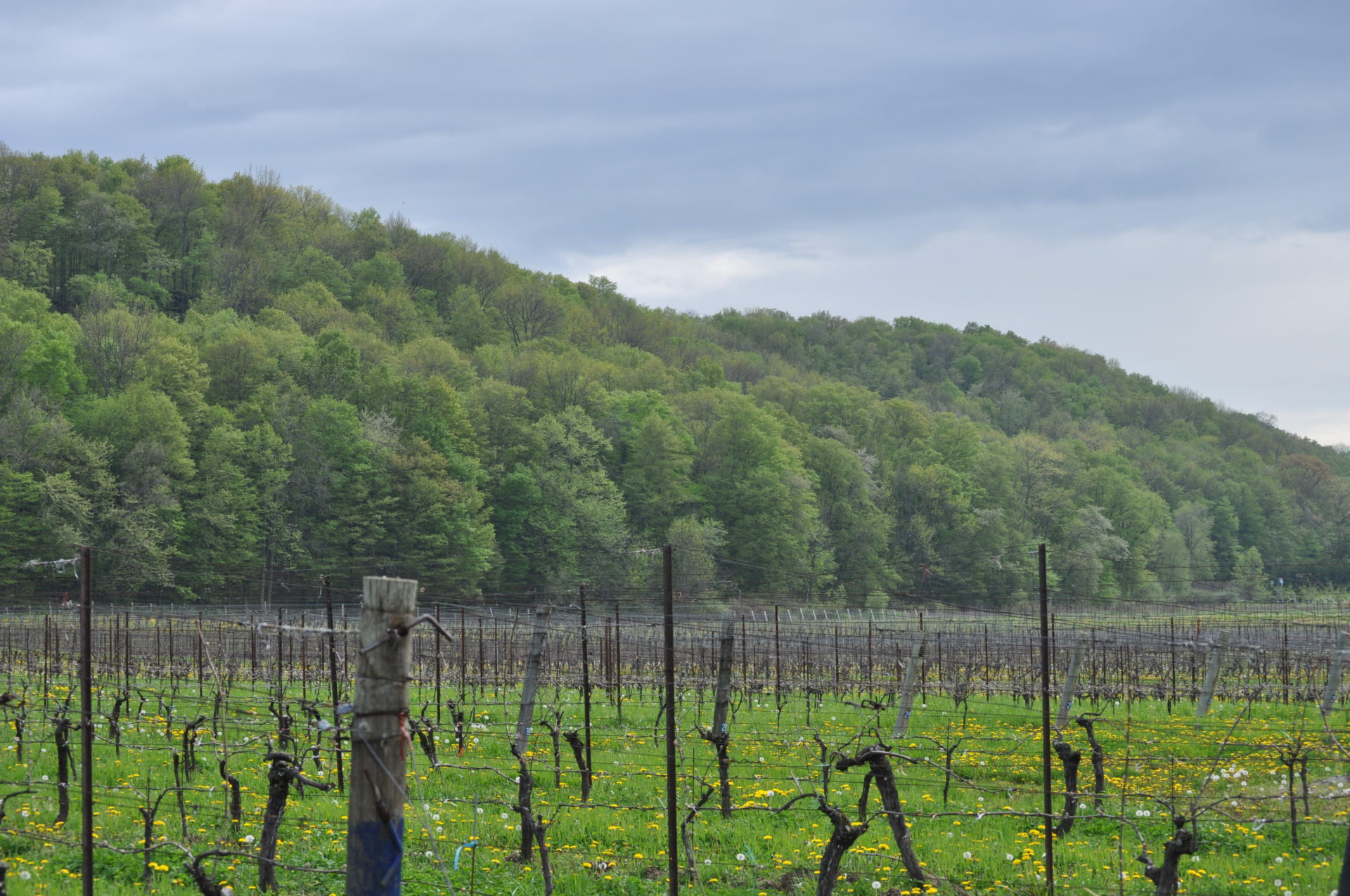 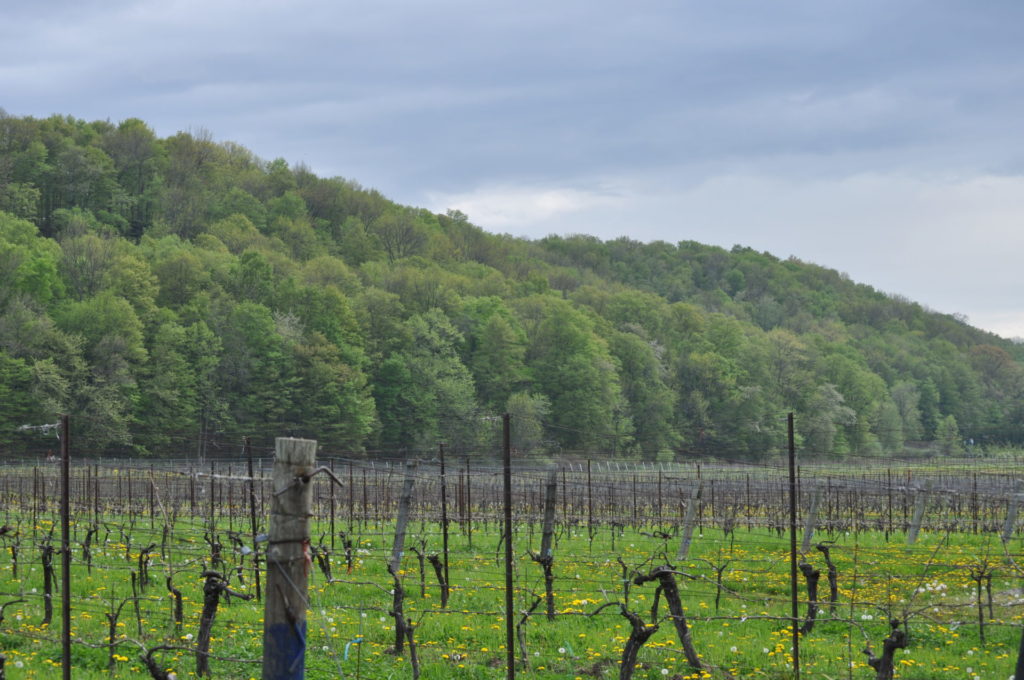 Springtime in the Rosomel Vineyard.

Many of the best vineyards in Niagara are located on the stepwise formations on the escarpment known as benches. The benches are the primary source for elevation, slope, and wind protection in the broader Niagara wine region. According to the VQA appellation system, there are four subzones of Niagara that feature bench formations, Beamsville Bench, St. Davids Bench, Twenty Mile Bench, and Short Hills Bench. I’m honing in on the Beamsville Bench area to look at the Rosomel Vineyard, currently owned and stewarded by Harald Thiel and his team at Hidden Bench.

Rosomel Vineyard is set on a broad terrace where the escarpment forms a double bench. It slopes gently northward toward the lake. The vineyard edges drape lightly towards the wooded thickets that bracket the vineyard on just about three sides. The Bruce Trail runs along the upper bench directly behind the vineyard. Being positioned between the two benches protects the vineyard from harsher winds, while the gentle slopes and proximity to the lake ensure air circulates thoroughly through the vineyard. It would be rare for cold air to settle and threaten frost or Botrytis’ sticky fingers to grab a hold during a humid fall.

Vineyards are typically planted with one or two varieties, and in rare cases a third. Rosomel has a more unique assemblage. Roman Prydatkewycz planted Rosomel Vineyard to a mix of noble varieties; four white and three red. There are prized old vine blocks of Riesling, Chardonnay, and Merlot dating to the vineyard’s inception in 1976. This site is distinctive not only for its particular location or mix of plantings but also because such a remarkable range of varieties seems to do well here.

The Hidden Bench team is led by proprietor Harald Thiel, winemaker Jay Johnston, and vineyard manager Joel Williams. The vineyard has been organically managed since 2010; certified by Procert since 2013. The three work closely to guide the vineyard through a successful harvest and in the cellar to finished form. They tailor viticultural decisions block by block, fine-tuning according to the needs of different varieties and the age of the vines. Practices like pruning are done with a long view of the vineyard’s life cycle. Joel prunes with both the current and following vintages in mind. This helps avoid yoyo-like cycles of bumper harvests followed by low yields in the year after.

Yields are kept very low, around two tons per hectare. They accept the old vines for what they are, doling out micro yields of stellar fruit. The ever-declining production of old vines often becomes a sticky point in a commercial winery. Fortunately, Harald and his team are committed to keeping the old vines for as long a tenure as possible.

The guiding ethos for winemaking can be summed up as high tech in service of traditional methods. The cellar is outfitted with the latest oenology gadgets and an array of ageing vessels, including temperature-controlled concrete. Fermentation starts naturally, and settling happens on its own time. The wines are bottled unfined and unfiltered whenever possible, requiring just a dash of sulphur at bottling. 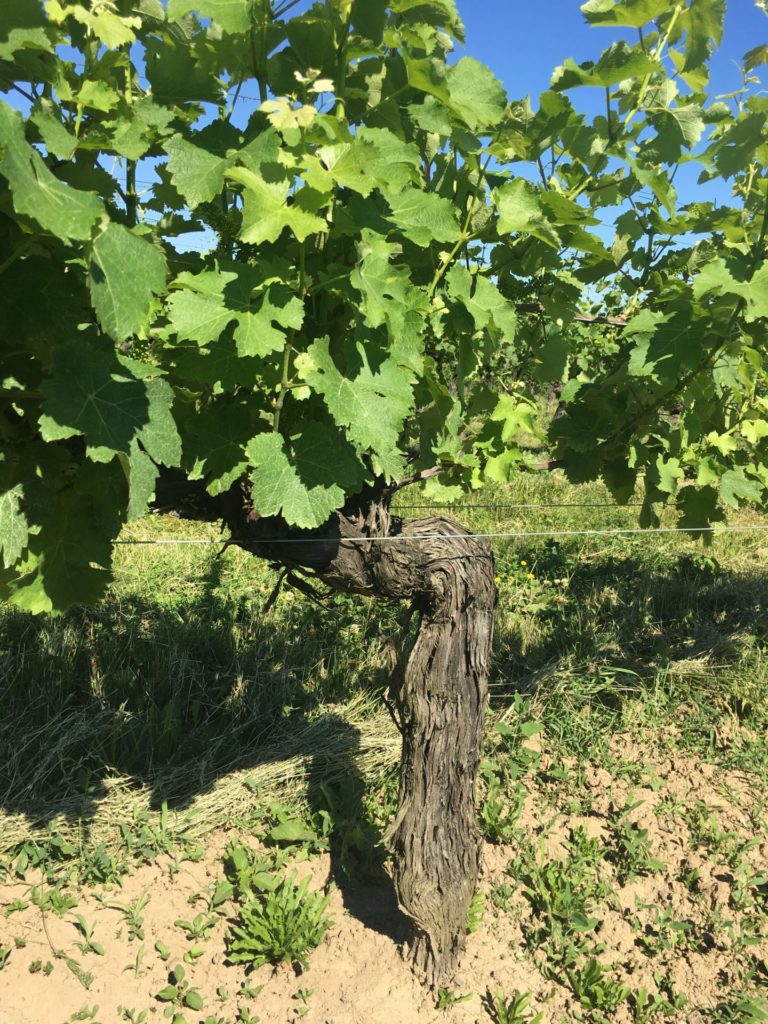 TERROIR IN THE GLASS

The wines from Rosomel consistently strike an enviable balance, according to Harald. I tend to agree. There is a happy tension between the generosity of fruit and mineral drive. Each of these varieties seems to find its sweet spot in the vineyard. A grab bag of soil types would be a convenient explanation, except the soils are broadly consistent across the entire vineyard. Oneida and Chinguacousy clay loam are layered over calcareous rich layers that start about 55cm down.
What then facilitates each of these varieties to thrive so well?

Terroir can get tunnel-visioned on soil. We still talk about wine showing a chalky or granitic minerality despite knowing that soil particles don’t physically transfer to the wine at all. However, I think another aspect of soil as terroir warrants mild obsession.
The emerging realm of microbial terroir is especially relevant in an organic vineyard. If you’ve heard the term before, it’s likely been about native yeasts’ effects on a wine’s aromatics. Microbial terroir also, and more interestingly, refers to the entire subterranean ecosystem that affects grapevines’ growth and development.

Beneficial fungi and bacteria settle in and physically link up with the root system of grapevines. Their filamentous networks are dense and trailing, reaching deeper soil layers beyond the grapevine’s reach. Functionally they serve as an extension of a grapevine’s root system. They physically break up the clay, which can otherwise become extremely compacted and inhospitable to plant life. Additionally, this microbial tangle actively buffers the vines against extreme fluctuations in water availability, soaking up the excess and releasing it back during drought conditions. You can imagine how important that can be for a region like Niagara that sees intense rain bursts during the growing season.

Microbial nets connect up and form extensive networks between individual grapevines and across to cover crops and adjacent natural forested habitats. These microbes unlock critical nutrients from the soil and exchange them for sugar and carbs from grapevines. There is a constant exchange of nutrients and minerals happening across this soil stock exchange that all mediate berry development and the overall health of the vines.

A countless number of these microbial species exist, and they come together in communities that are distinct to particular rootstocks, soil types, and even the age of grapevine. When terroir is understood to extend to the living subterranean ecosystem instead of just the physical properties of rock, then you begin to see that organic viticulture is a crucial pre-condition to defining terroir.

This re-imagining of terroir makes me think that wine is a reflection of the cosmos beneath our feet. Sent up the grapevine as through a telescope that we might notice how small we are in the face of so much life happening beyond our sight. 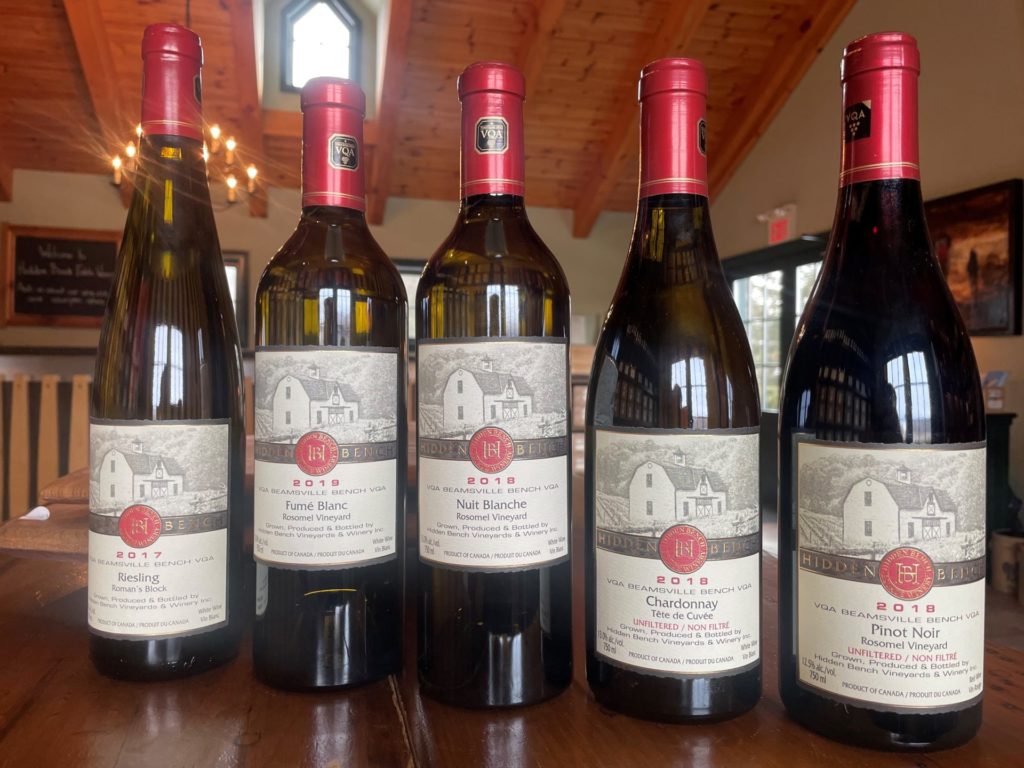 Wines from the Rosomel Vineyard 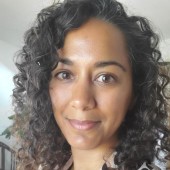 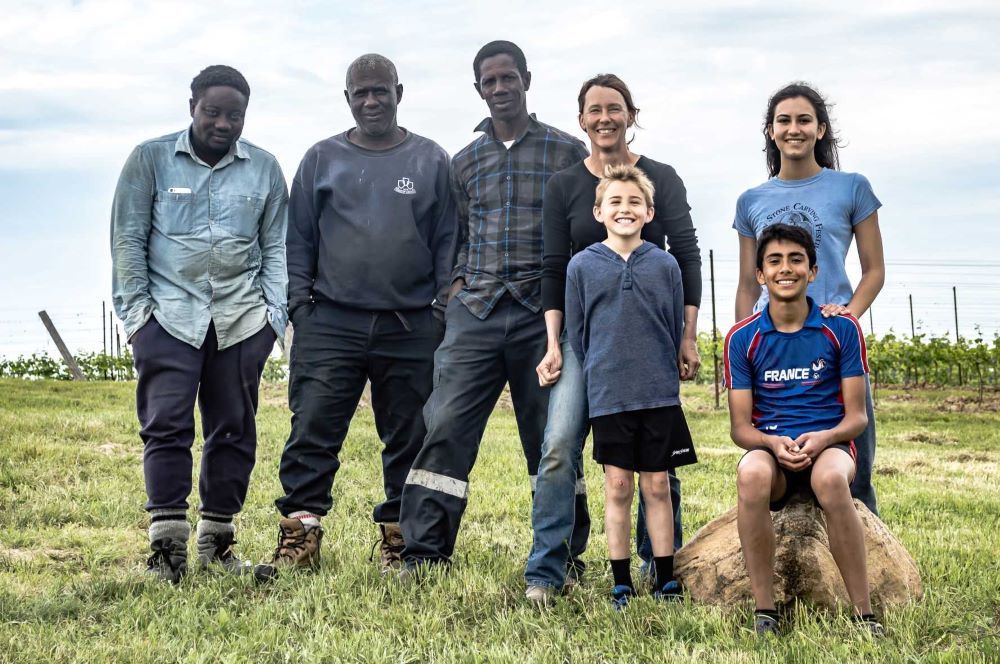 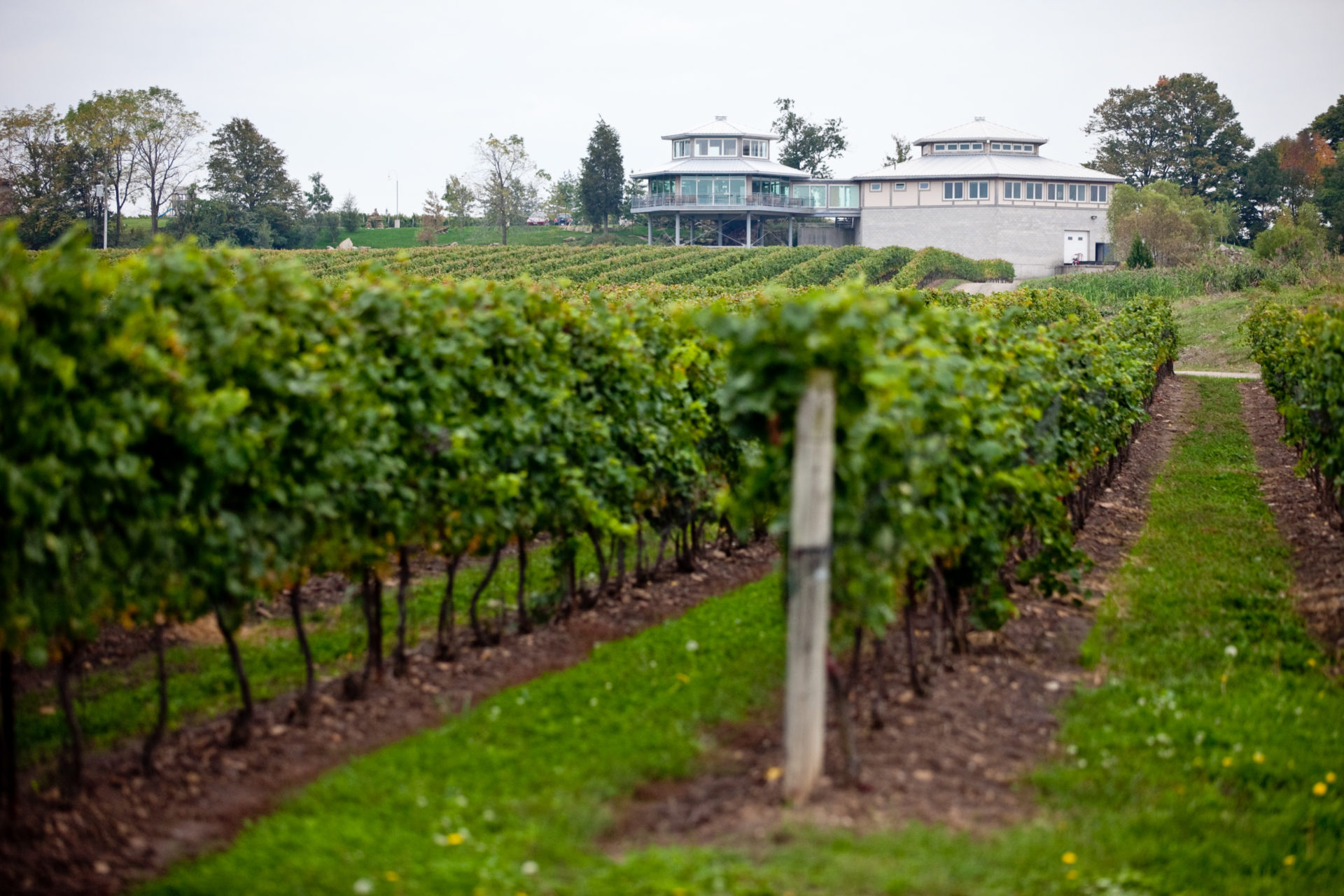 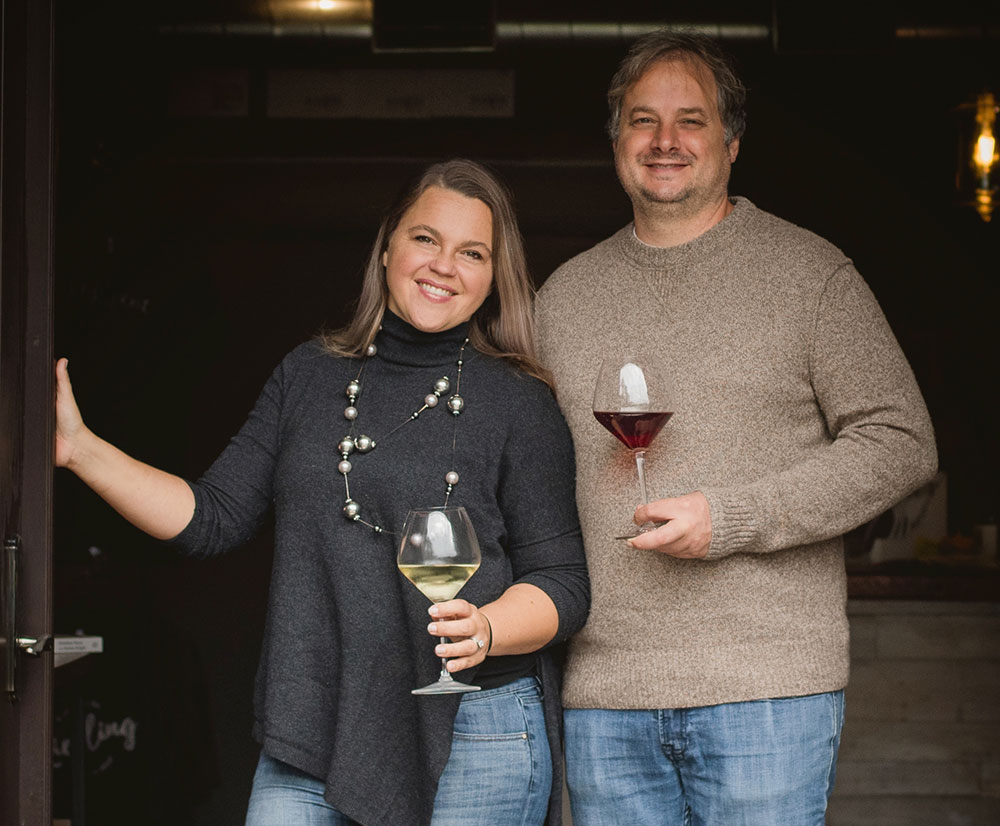 Find A Time And Place And Put It In A Bottle: Leaning Post 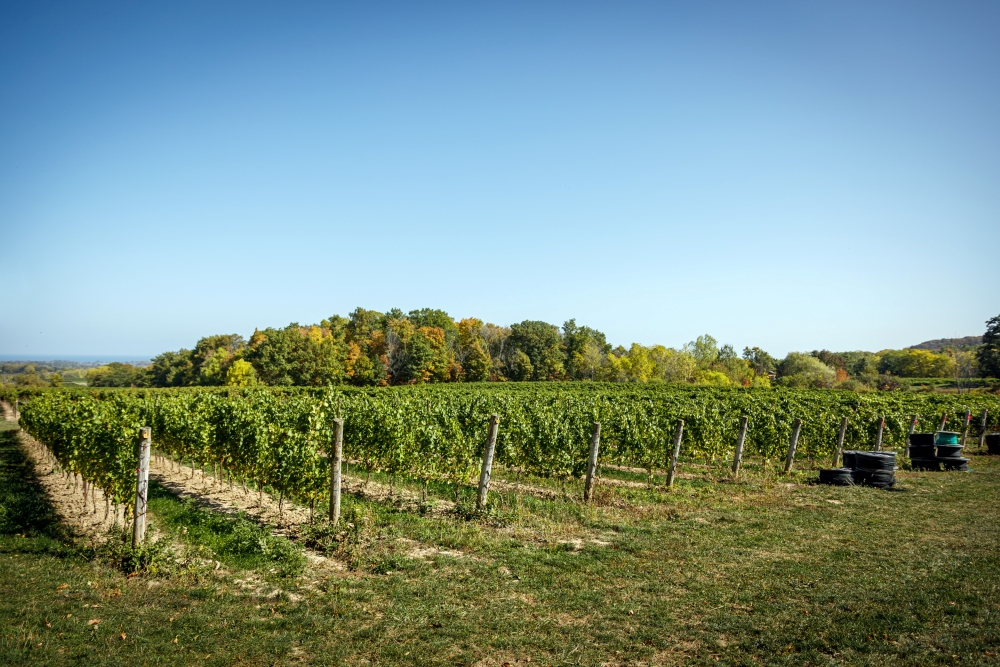