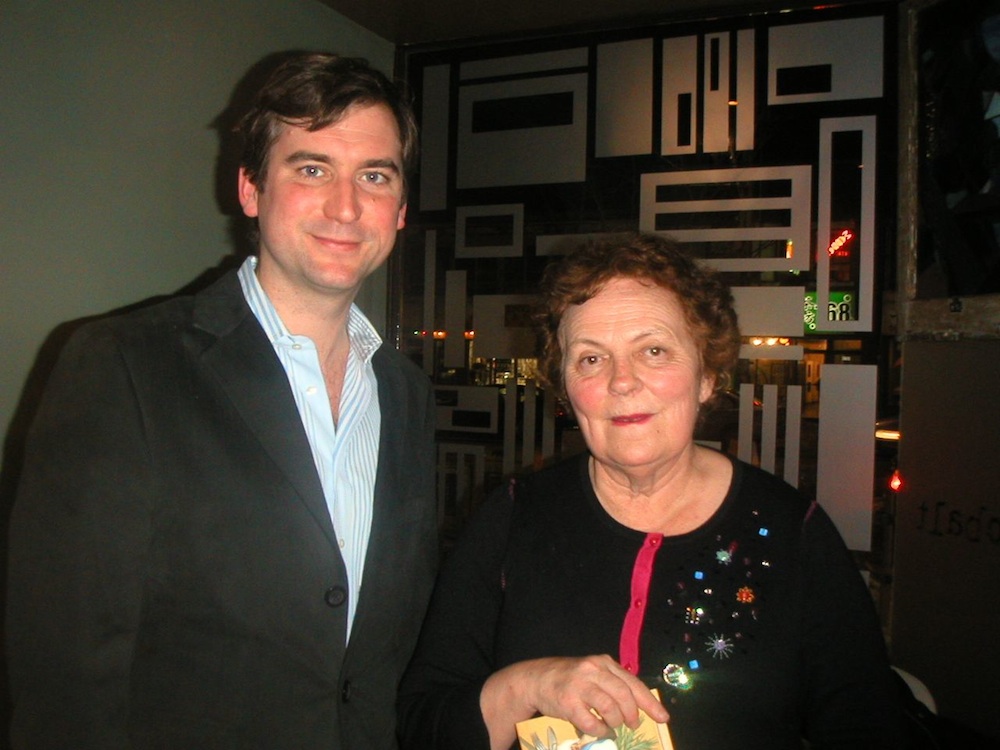 Gina Mallet and I at a Gremolata party at Cobalt Cocktail Bar, February 2005.

Gina Mallet has died. The James Beard Award winning author and newspaper critic passed away from cancer at The Kensington Hospice in downtown Toronto, on July 18. Two of the newspapers Gina regularly wrote for in Toronto have written obituairies: The National Post’s is here and The Toronto Star’s is here. Two of her Star colleagues from her theater critic days have written personal blog posts in her memory: Ron Base’s is here and Jim Bawden’s is here. What follows below is my attempt at the same.

I met Gina Mallet in the fall of 2004, which was when Last Chance to Eat: The Fate of Taste in a Fast Food World was first published. I had just quit my job in web marketing to start Gremolata, which might well have been the first online magazine on food and wine in Canada. I had a friend who was an editor at Gina’s publishing house who took an interest in what I was trying to do, and she suggested I talk to the author and connected me with their publicity department.

Either the publicists or I ended up sending her a request for an interview by email, and instead of a yes or no, Gina sent back a veritable essay of a 2,000 word email. It explained why she wrote the book and why our readers might be interested in reading it. She more or less interviewed herself and I knew that a) I was unlikely to do a better job, and b) if Gina Mallet writes you a piece (especially if you are still a very low circulation, combination email newsletter and hand coded html website), then you’d be a fool not to publish it immediately before she changed her mind.

Gina’s self interview eliminated the opportunity to meet her, but I was curious, so I asked her to lunch and we had a really good time. We gossiped about the food and food writing world, as well as the world of newspapers (which I know a little bit about because my father had worked in it). This was heady stuff for me, as I considered myself to be very much an outsider looking in. I was grateful then, and I remain grateful now, that I had a such rich introduction to food writing so quickly into it.

Before I describe my lunches with Gina, and why they blossomed and then abruptly ended, I want to make it clear that in my opinion Last Chance To Eat deserves its place high in the new food writing cannon. First, it was a big deal and made a big impact on the chattering classes. It was written three, and published two, years ahead of Michael Pollan’s Omnivore’s Dilemma. Her message that modern food didn’t taste very good, resonated and she deservedly got a lot of attention from the English-speaking world’s media. Second, if you read her carefully (which I’m not sure all her reviewers and profilers did), she made a new argument for flavour that was completely aesthetic and totally divorced from the environmental movement or any politics from the left. In fact, I don’t think Gina would mind if I described her politics as more than less Thatcherite. Her book was about how things tasted and nothing else, and she was happy to defend genetically modified vegetables or the menu at McDonald’s, if she thought something had been done for the sake of improving flavour. Food and flavour, the book reminded us, were important.

“The first one is always the best, isn’t it?” Gina would proclaim this as she took the first sip, from the first glass, from the first bottle of Chardonnay. Lunch with Gina was fun enough to become semi-regular occurrence, something we did every few months. Not soon after our first or second (always) white-wine fueled meals, and around the time that Gina won the James Beard Award for Last Chance To Eat, Donna Dooher (another accomplished and established lady to whom I am grateful for helping me greatly when I was just getting started) joined us. A little less gossip now, and a little more conspiring: how could we move Canadian food culture forward? If New Zealand has several glossy food magazines, why couldn’t Canada have one? These were the sort of plans that get made well into the bottle of Viogner, which followed the bottle of Chenin Blanc, which followed the Riesling that was opened at 11:45.

The lunches continued for a few years, and were supplemented by two memorable dinners at her Park Road apartment, and then they stopped. As Gremolata and I became more established (to the point where I had a column in the National Post, sometimes placed next to hers). I was building up a network of colleagues and mentors who I liked and respected, as well as selling advertising to businesses I thought were honourable and I wanted on my site. At lunch I found myself defending these new contacts and clients from Gina’s attacks. The gossip seemed a little more malicious now. Anyone who knew Gina knows that she wasn’t much for giving quarter on an argument, especially after a few drinks. Not much fun if the thesis of that position is a slander against a friend, or an argument that Canada’s best days are behind it and sensible youth would do well to move to the United States. That last one became a regular theme in the last meeting, and I remember politely but firmly reminding Gina that I sat on the board of an organization that promoted Canadian history and civics, which changed the subject.

The last straw was in late 2008 or early 2009, in the wake of the financial crisis. At a dinner hosted by one of the city’s top restaurants and attended by most of the city’s top food and wine bylines (and a few upstarts like me) I sat next to Gina. She, as the British satirical magazine Private Eye would say, looked tired and emotional. Perhaps our lunch routine was more than occasional. Maybe she sensed that I worried that she was drinking because she told me she had a fool proof system where she could drink as much as she liked one day, as long as she didn’t take a single drink the next day. It was clear we were on the positive side of her binary system, which wouldn’t have been so bad, except that many of the usual targets of her diatribes (i.e. writers for competing newspapers and magazines) were there, sitting around us. Gina began to give them her treatment, delivered close to my ear in a sort of stage whisper while I cringed. At the first opportunity, I pivoted my torso and neck to face the colleague on my right and kept in that position for most of the rest of the meal.

I hope that Gina had some comfort in her last days, and some joy in the last years of her life. I stopped seeing her regularly after that dinner, but without any announcement or declaration of estrangement. I employed a cowardly but effective tactic of always being too busy to make it for lunch (which was half true, anyway). I would run into her sometimes on Yonge Street, or at a food event, and she seemed ok most of the time. Other times a little shaky. I am not very proud of how I behaved at that dinner or afterwards.

I am very sorry that Canada has lost one of its more innovative food writers and champions of epicurean pleasure. I am even more sorry I won’t have another lunch with Gina. I think I always hoped I would.