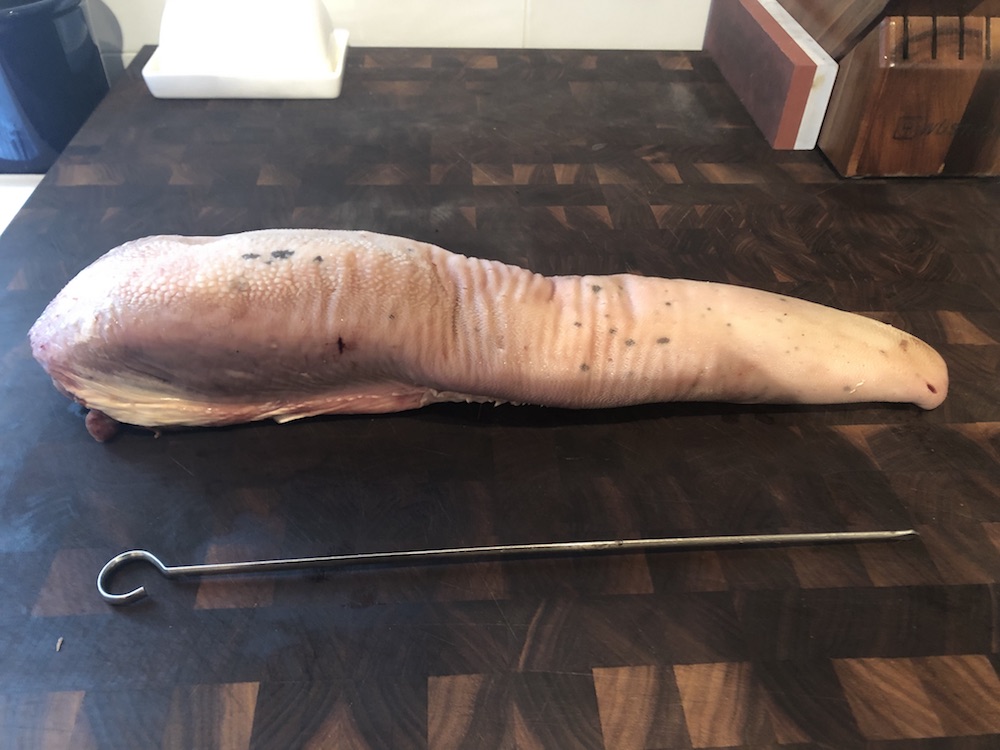 Not for the squeamish, a raw Ox tongue is a fearsome looking thing. I usually puncture the tongue around 100 times with a skewer before it goes into the brine. I have found this to be a worryingly satisfying exercise.

Growing up just outside of Edinburgh and having a rather excellent local Butcher (sadly no longer in operation), I’m pretty sure that we ate sliced tongue at least once a month. Not that my Mother would ever have considered cooking it herself, no, this was purchased pre-cooked from Scott The Butcher in a form akin to that of a cold cut. It was always served in sandwiches and, if my memory serves me well, was always a slightly disconcerting muddy brown colour. Despite this, I don’t remember my sister or myself having any issues eating it, although we weren’t ever afforded the luxury of being picky eaters; it was either eat what Mum gave us or go hungry, something that I must remember to thank her for as it certainly shaped the gourmand I am to this day.

Scott The Butcher in Juniper Green was apparently the only Butcher that my Mum trusted at the time. I’m not quite sure why she had (and still has) such a general mistrust of the profession, but I guess it may have to do with her upbringing in rural Lanarkshire or perhaps watching Sweeney Todd a few too many times? To this very day my Mother has an innate suspicion of anything meat-related wrapped in any kind of sausage skin or pastry, with this conjecture extending all the way up to the almighty Haggis. 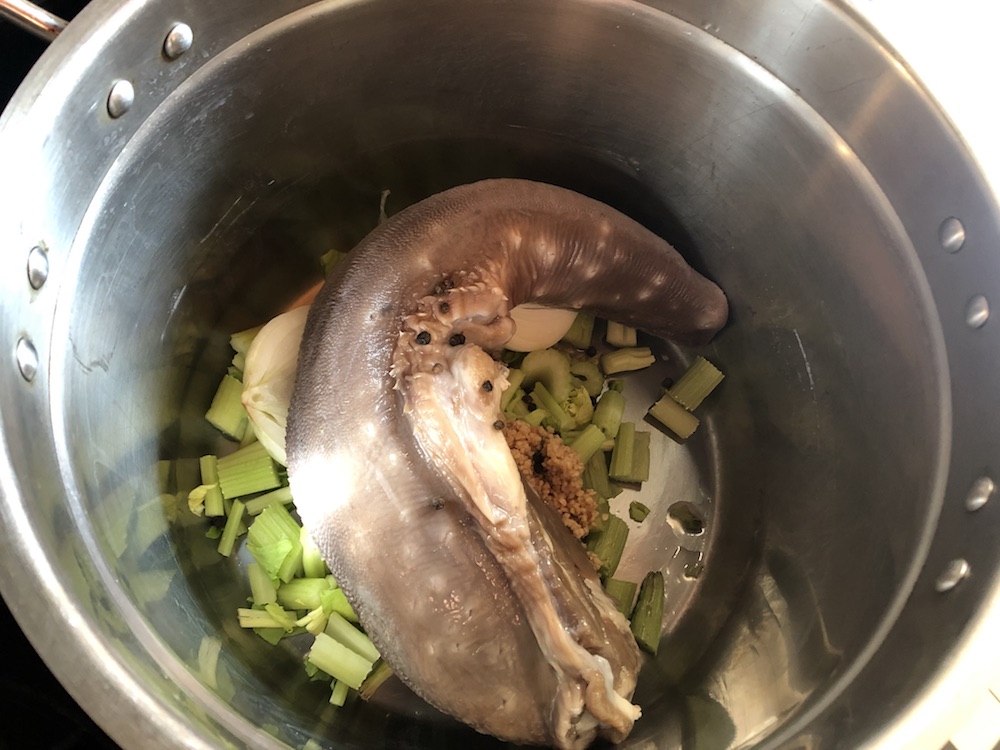 I change my tongue recipe up every time I cook it, but this year was the best ever. Here the brined tongue is about to be boiled up with celery, a shedload of garlic, onion, black peppercorns, carrots, and as many fresh herbs I could rustle up from the back yard. I’ve discovered that just over 3 hours is the sweet spot here, especially with the extended brine.

My Mum’s most vocal adoration of Scott The Butcher obviously went a little too far for my Father, as family lore has it that at some village social my possibly-inebriated Dad went up to aforementioned Scott and told him that his mince (read: minced beef) was rubbish, much to my Mum’s chagrin. I believe that my parents separated soon after this notorious incident at Blinkbonny’s Glenburn Hotel.

She must have really put her faith in Scott The Butcher though, as we were regularly served his “Potted Meat” (AKA Potted Hough) and told how it would make us grow big and strong; even as a child I was incredibly curious as to what exactly went into this mysterious gelatinous brown compound. And then of course there was the Tongue. 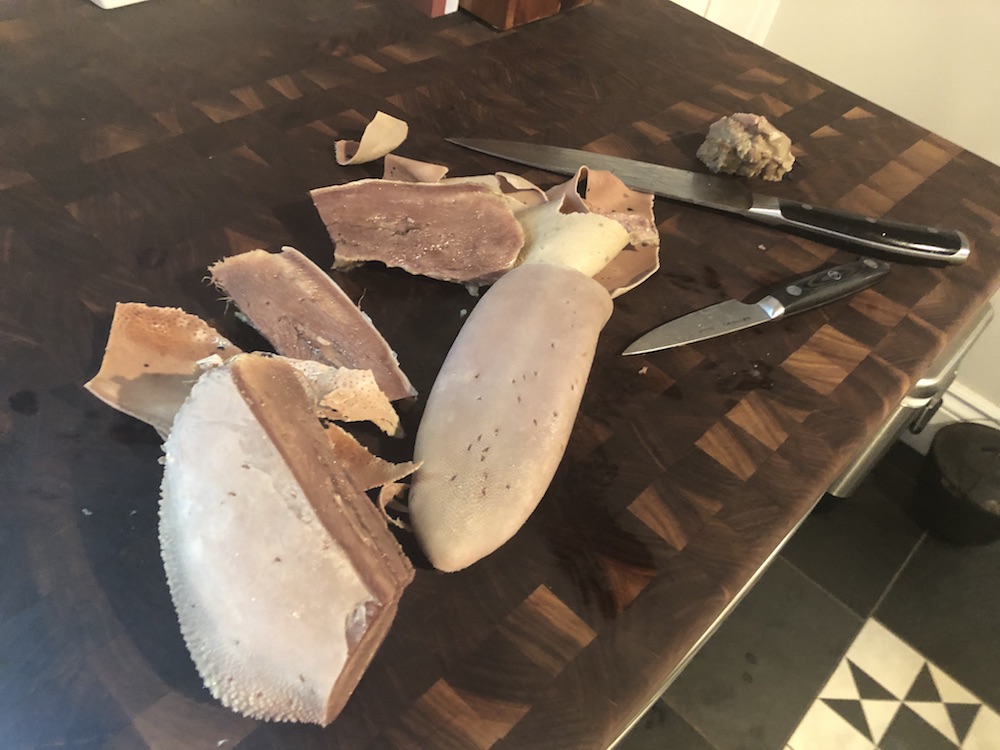 A very sharp knife is required to remove the outer skin of the tongue.

When preparing tongue at home I’ve chosen to approach it in a number of different manners, but the most satisfying of these was certainly working from the recipe contained within Chef Chris McDonald’s truly excellent Sous Vide book. This year I chose to stick to Chef Fergus Henderson’s boiled method, but experimented a little, extending the brining time for a extra week, for a grand total of 14 days.

To be honest with our readership, this was not actually planned, as I forgot about the brining tongue sitting in our fridge and was then out of town for a week, however the results were most satisfactory, and flavour-wise it was perhaps the best tongue I have cooked thus far. I’ll most probably make this extended brining a regular part of the process in the future as it really made all the difference to the end result, although I’d recommend probably adding extra 33% of the salt into the brine just to be on the safe side. 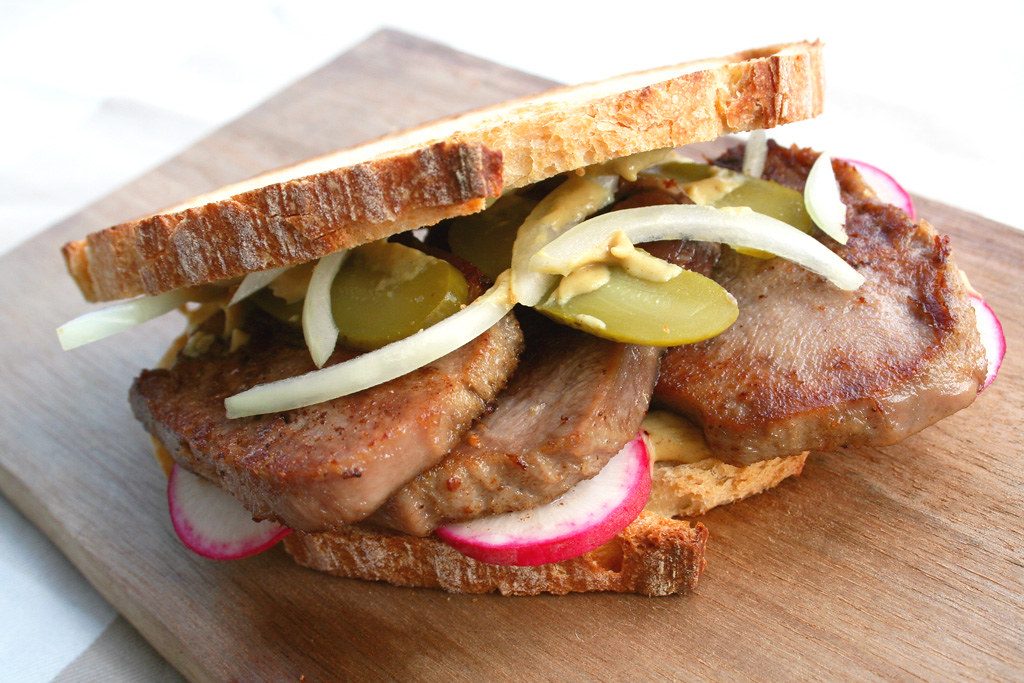 Probably one of my favourite ways to serve tongue is giving it a quick grill and shoving it inside some decent bread for a delicious sandwich. This gorgeous pic is courtesy of www.thegluttonlife.com, a site well worth checking out for not only the lovely photography but the great recipes. I forgot to take a pic of my sandwich, and mine are woefully unexciting, hence the borrowed pic!

Chef McDonald’s brine has always given me the best result with his combination of beer, ginger, garlic, bacon fat, bay leaves, salt, brown sugar, coriander seeds, mustard seeds, black peppercorns, and liquid smoke. Now you may turn up your nose at the thought of Liquid Smoke, but the Woodland brand is all natural and really does give the end product a almost Pastrami-like character.

I now have a large plastic “food-grade” 5 gallon bucket with a lid that I use for the sole purpose of brining, be it tongue, turkey, chicken, shrimp, or pork chops. One can pick these up at Canadian Tire for a very modest price, and I’d certainly recommend you pick one up if you want to get into this brining lark. And I’d definitely get the separately-sold lid, as without one you may find your mother-in-law’s dog getting extremely curious… I learned this the hard way.

During the winter I use our mud room at the back of the house for brining, but in the warmer months this bucket takes up most of our fridge space when in use. 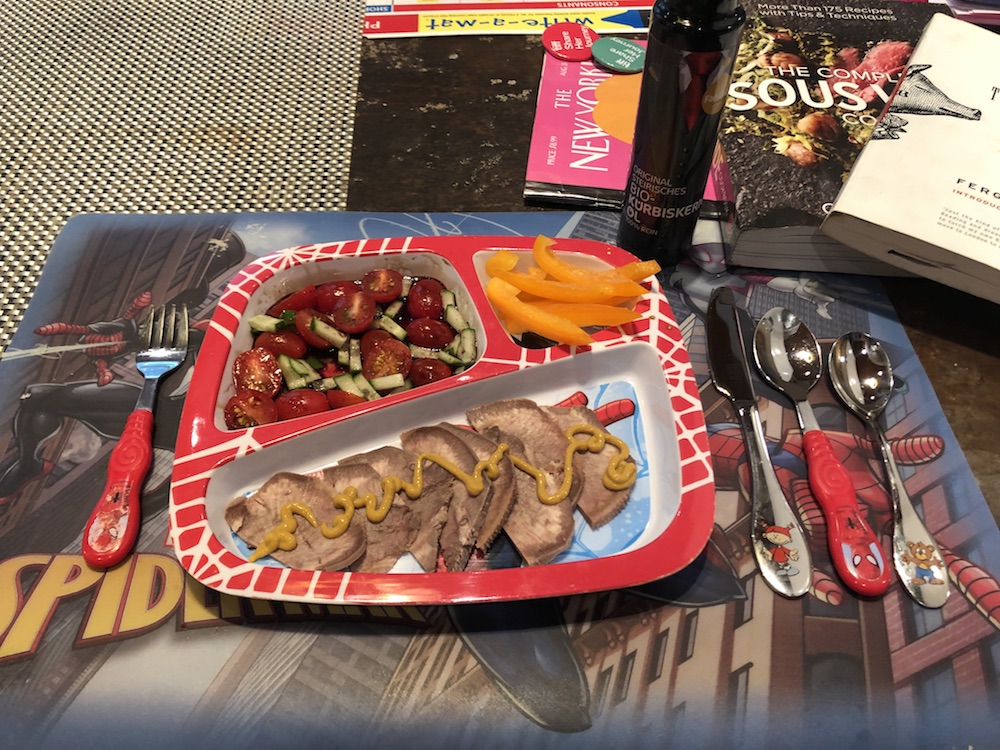 Thankfully our five-year-old son is extremely open-minded when it comes to food, so a dinner of sliced tongue with mustard and a simple tomato and cucumber salad is most welcomed.

Although thought of as offal, the ox tongue is technically muscle meat, and so it comes with the nutritional profile of such cuts, being a good source of iron, zinc, choline, vitamin B12, other B vitamins, and trace minerals. It’s also really, really fatty, meaning that it has the potential to the the juiciest, most tender cut of beef that you could possibly imagine, even when grilled off before serving.

Many people are wary of consuming something as visceral as ox tongue, but I have found that in most cases I can convince even the most apprehensive to sample a little, with the great majority finding it to be utterly delectable.

The tongue I cook today is a million miles removed from the sliced tongue from Scott The Butcher that we were raised upon as children, and has become a firm favourite in our household even if I only get to cook it around once a year.

Why not give it a shot, but be sure to procure a “happy” tongue from a reputable Butcher.

Edinburgh-born/Toronto-based Sommelier, consultant, writer, judge, and educator Jamie Drummond is the Director of Programs/Editor of Good Food Revolution… And he’s sure that this isn’t good for his gout.