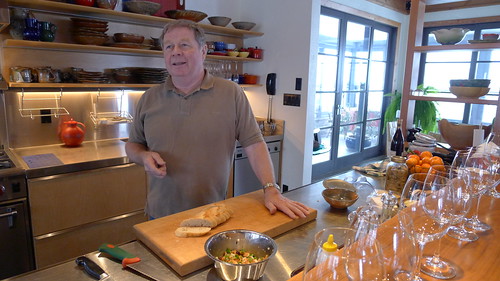 Martin Malivoire in the kitchen of his vineyard home.

It was supposed to be a sun-spackled welcome to spring. Jamie and I had planned to head down to the Beamsville Bench for a comprehensive tasting at Malivoire when word had come that none other than founder and owner Martin Malivoire would host us at his house and cook us a lunch as part of the tasting. This was clearly an offer we couldn’t refuse. Then, as the weather began to warm up and the first days of spring saw sunshine, we heard through Malivoire’s multi-talented marketing man, Stephen Gash, that the affair would be held at Mr. Malivoire’s residence, built smack-dab in the middle of his (original) Moira vineyard, whereupon we would be served pizzas made in his custom-built wood-fired oven. What vision of spring-time bliss! 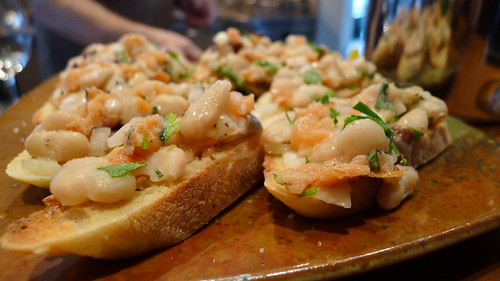 A starter of white bean and smoked trout crostini

It didn’t quite work out that way, since March 23 saw the biggest, most furious blizzard of the year descend onto the Golden Horsehoe. Jamie and I managed to crawl our way through horizontal sheets of snow around the QEII to make it to the Bench. There was no view of Toronto across the lake (actually, you couldn’t even see the lake) when Martin Malivoire welcomed us into his home and treated us to a fantastic indoor lunch while Stephen poured an extensive range of their organic (“it’s organic because I actually live in the vineyard”, Martin explained), Niagara-grown and made wines (see Jamie’s notes below). 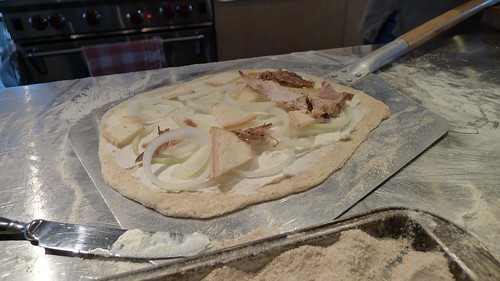 Flammekueche gets ready for its pizza stone and oven moment

To start, we had a white bean and smoked trout crostini seasoned with a drizzle of truffle oil and fresh oregano and parsley, inspired by Chef Dave Pasternak at New York City’s Esca. A perfect match to lighter and aromatic whites and just the thing to get our appetites going, since the rest of the lunch was to be devoted to flammekueche! 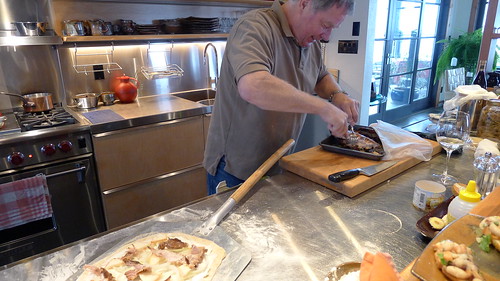 Flammekueche is, of course, “flame cake” in the Alsatian German dialect. The classic flammekueche is dressed with ham, onions and some sort of creamy bechamel. Martin put a distinctive Niagara spin on his. The dough was made with “hard red” wheat milled artisanally a few miles away. In lieu of bechamel, he had made an “improvised creme fraiche” by straining goat’s yoghurt in cheese cloth overnight, giving the base sauce a lovely tang and zing, as well as the requisite creaminess. While the flammekueches had to be cooked in his oven inside, he had been heating a pizza stone for some time, to ensure a crust which came out simultaneously crispy and chewy (thanks to that glutenous “hard” wheat). 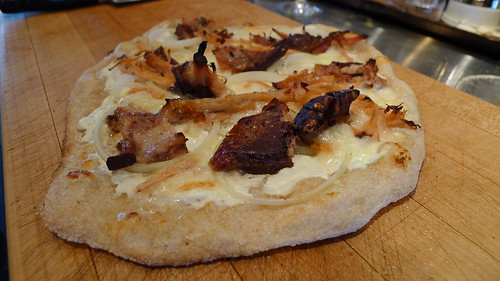 The end result… and it was delicious!

The first flammekueche married Alsatian tradition with New World innovation: white onion rings, Pied de Vent cheese from the Isle de Madeleine and pork belly that had been braised for hours in Coca-Cola. Did it ever work, as we climbed up to more solid-bodied whites. There was a triple-sweet-earthy hit of caramelised alluvium, salty and barnyardy cheese with sweet and spicy umami-rich beef, all lifted by the yoghurty sauce and crispy/chewy dough. Life was good. 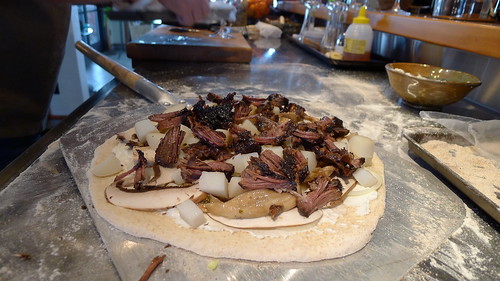 Time to try out a different recipe…

The second flammekeuche featured white onion again, portobello mushroom, somebody called Joey’s mother’s homemade pickled eggplant (for a touch of acid), cubed potatoes (that had been par boiled) and beef short-ribs that had been braised with the pork belly in Coke. To ensure moisture in the hot dry oven, Martin drizzled the pizza with a touch of beef stock before adding generous shreds of Parmesan. When it came out it received a final benediction: a light drizzle of extra virgin olive oil. Wow, it was good – the perfect foil for the crappy weather outside. So good, he made another like it (but with some black beans he’d cooked for fun) and we transtioned from rosé to red with happy bellies. 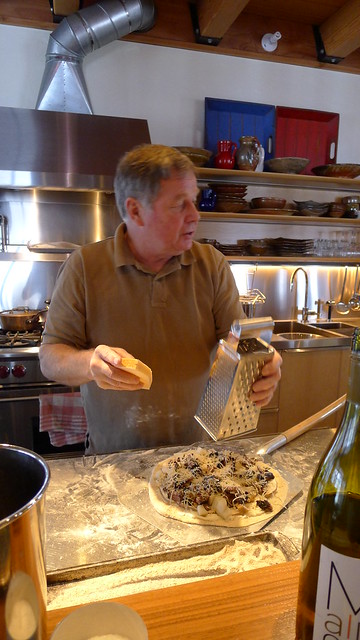 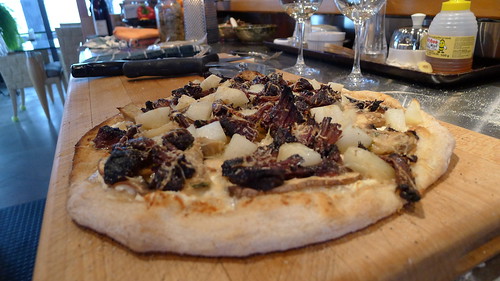 2010 Malivore Pinot Gris “Alive” Niagara Peninsula VQA
Tonnes of stonefruit on the nose. Plate is crisp, refreshing and exhibiting a surprising minerality. Neither Alto Adige nor Alsace. There is a weight and richness that is reminiscent of Alsace, but also a briskness on palate that gives a nod to NE Italy. Fruit comes from growers following best practices, hence the moniker “alive” 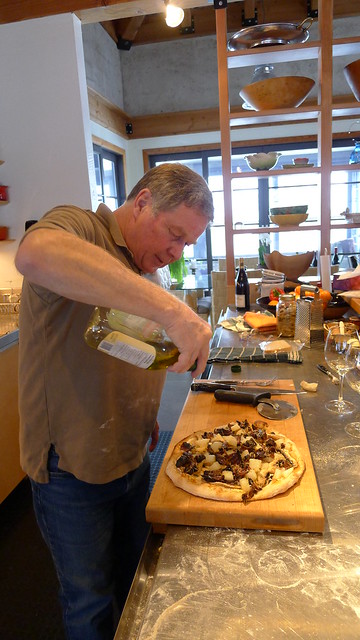 DO try this at home… 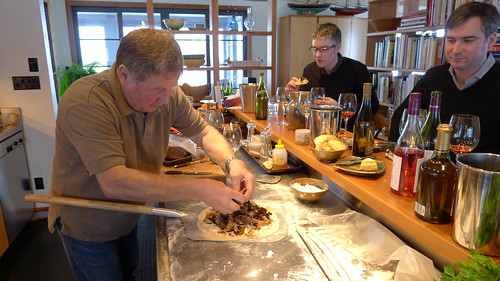 The tasting panel are most impressed

2009 Malivoire Chardonnay “Mottiar Vineyard” Beamsville Bench VQA
From Winemaker Shiraz Mottiar’s own vineyard, positioned a little higher than most on the Beamsville Bench. The vines were only planted on this old gravelly peach orchard in 2005, so are still fairly young, but showing incredibly capable of producing some stellar fruit. The wine, despite going though a full malolactic ferment, still has considerable acidity and hence the wine is quite austere, complex, and beautifully structured. Needs a year or so, but one of my favourites in the lineup. 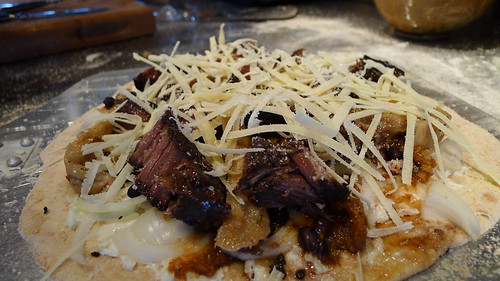 Certainly not your standard pizzeria fare

2010 Malivoire Pinot Noir “Alive” Niagara Peninsula VQA
Using fruit sourced from Malivoire’s estate, augmented with that from Moira, Mottiar, and from Grower Ed Hughes. An attractive red/dark cherry nose with an complex and almost creamy texture. Spice and cranberry on plate. Oak has been handled very carefully and sits well with the calibre of fruit. A pleasant 12.5% alcohol. Quite impressive. 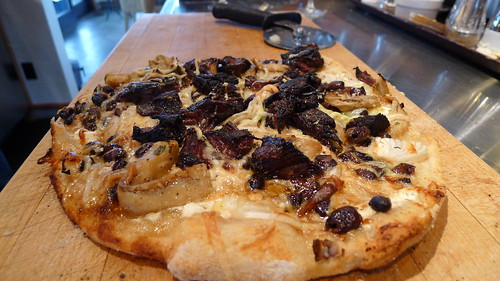 No, I couldn’t possibly have another slice… Oh… Go on then…

2009 Malivoire Pinot Noir Beamsville Bench VQA
This wine shows a seriously intense perfumed nose of violets and an almond nuttiness. The palate follows through but with lots of delightful red cherry. Good structure and weight but needs a while to come into its own. Did I mention that crazily seductive nose?… 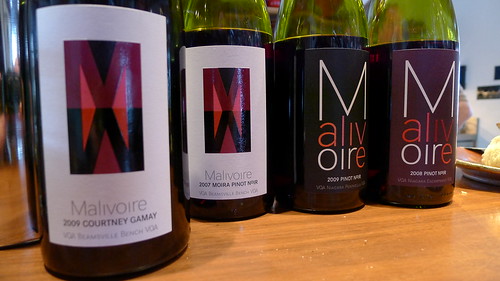 A fine line-up of wines to accompany

2009 Malivoire Gamay “Courtney” Beamsville Bench VQA
Gamay performs so well in this part of the world I am constantly surprised that the wine-drinking public haven’t embraced it more. I have always been an enormous fan of this wine, made with fruit from the Northern part of the Malivoire estate, closer to the brow of the Beamsville Bench, with a soil of silt over underlying clay. The Courtney is always elegant, exhibiting extraordinary finesse, and reminds me of a good Cru Beaujolais. A extremely complex and feminine wine that is always so versatile when it comes to food pairing.

2007 Malivoire Pinot Noir “Moira” Beamsville Bench VQA
Leave this wine to develop in your glass for around five minutes and then return to find an evolving and enticing bowl of vinous complexities. There is so much going on in there. An underlying and alluring smokiness, some candied fruits, a touch of spice, barrels of intense dark berries, perhaps a little stemminess. The Moira is always such a giving wine, and this is no exception. The palate is as multi-layered as the nose. An extended, persistent, delicious finish. A really great bottle of Niagara Pinot Noir.

2007 Malivoire Pinot Noir “Cat On The Bench” Beamsville Bench VQA
Perhaps I’m just a sucker for a Pinot Noir with a cat on the label, but this is some of the finest juice I have tasted from Niagara in some time. Theoretically a Passe-Tout-Grains, this wines is a blend of two of Malivoire’s best red fruit vineyards, comprising mainly Pinot Noir from the famed Moira vineyard, but adding a splash of Gamay from the aforementioned Courtney block. This cuvee brings together the very best of both spots and produces of wine of surprising power, depth, and definition. An extremely limited edition… only 24 cases.

» In The Kitchen With » Martin Malivoire