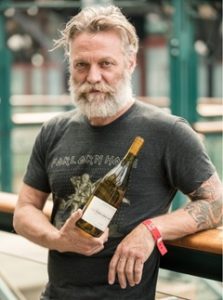 Is Matthew Rorick the most interesting man we know?

His past careers include navy seal, professional skateboarder and custom guitar maker before embarking on Forlorn Hope. His wine story began with a degree at UC Davis before making wine around the world, buying a beautiful property and quickly becoming one of California’s most exciting wine makers and grape growers, his Rorick Family Vineyards supplying many of the state’s most exciting small projects. He started Forlorn Hope to celebrate California’s boundless viticulatural potential and diverse history. His wines come from his stunning Calaveras County estate in the Sierra Foothills where Matthew organically farms 75 hectares of diverse grapes on limestone soils. He also works with a handful of growers across the north of the state whose plantings might otherwise by misfits: the uncommon sites and varieties that pay tribute to California’s eclectic and often unexpected viticultural heritage.

Fresh, precise and interesting, Forlorn Hope has quickly become a star of our portfolio. While the Queen of Sierra line will remain in consignment, his rare bottlings will be available twice a year through private order. Find them below.  First come, first served! Email NicoleC@lifford.com to ensure allocation.

Grown in the heart of the Napa Valley, just north of the town of Yountville, by the Hoxsey family. Planted in the 1950s by Andy Hoxsey and his father; the soils are a mix of alluvial loam, river cobble, and volcanic. The vines are organically tended and dry farmed.

The fruit for our 2013 Nacré was hand-picked and pressed whole cluster, and underwent spontaneous/native fermentation in stainless steel. Racked off lees at the completion of ferment, the wine was bottled in June of 2014 in order to allow the significant portion of the wine’s aging and development to occur under cork. To this end, it was aged five years in bottle prior to its release in the winter of 2019.

The Nacré is produced in the same fashion as the Sémillons of Australia’s Hunter Valley and is capable of decades of aging. The wine bears the name Nacré — meaning mother-of-pearl — as a testament to its affinity for pairing with oysters.

Done in the style of the great Semillons from Australia’s Hunter Valley. Crisp, racy and focused, with layer upon layer of flavor that opens up with decantation.

Grown on the Rorick estate vineyard in Calaveras County, on soils comprised of a layer of schist over dolomite-rich limestone. Elevation of the vineyard is 2000’. The combination of limestone, elevation, and the cold nights of the Sierras produce fruit with depth, texture, and brilliant natural acidity; minimal handling in the winery allows for an honest and pure expression of site and variety to shine through.

Our estate Chardonnay was hand-picked and given pigeage before pressing. Fermentation was carried out by native yeast, and occurred in neutral 500 liter puncheons. The wine was racked off of its lees after 4 months and saw a total of 22 months elevage. Bottled unfined and unfiltered. As with all Forlorn Hope wines, no new oak is utilized, and nothing was added to the must or wine (no cultured yeast, ML bacteria, water, tartaric acid, enzymes, nutrients, etc) with the exception of minimal effective SO2.

Alvarelhão: exotically aromatic red; native to north-western Iberia and of late taken root in Alta Mesa. The Moor continues to weave his spell, guiding us through alternate histories and elliptical futures. Alvarelhão? There is no other. Fermented with 100% stem inclusion in open top fermenters and pressed off the skins and stems after 20 days. Elevage in stainless steel; bottled unfined and unfiltered. Absolutely unique rich and meaty treat.

St. Laurent: a dark-skinned, aromatic enigma. Grown by Dale Ricci in his Carneros vineyard, the 2016 Ost-Intrigen is filled with the swirling sights and sounds of a Medieval trading post on the frontier between old Europe and the Orient: strange beasts, exotic incense, wrought metal, redolent spices. It carries the soul of Burgenland, but at its heart is distinctly Californian. St.

The Poor Ranch lies just outside of Hopland in Mendocino County, on an east-facing hillside made up of volcanic stones and sandy clay soil. The wine’s name is a nod to what many of California’s old-time growers still call Carignan; on this bottle it is a piece of viticultural linguistic heritage preserved along with the produce of the Poor Ranch’s 65 year old vines. Pure, sinuous, and bracingly fresh, with a firm backbone to carry its bright and true fruit core well into the next decade.

The fruit was hand-picked and is one of the only red wines which we destemmed for fermentation in 2016. The must received no sulfur at reception and underwent pigeage and/or punchdowns twice daily; fermentation lasted 14 days at which time the wine was pressed down to neutral 227L barriques. The wine was racked off of its lees at 10 months and saw a total of 14 months elevage. Bottled unfined and unfiltered. As with all Forlorn Hope wines, no new oak is utilized, and nothing was added to the must or wine (no cultured yeast, ML bacteria, water, tartaric acid, enzymes, nutrients, etc) with the exception of minimal effective SO2.

Grown on the Rorick estate vineyard in Calaveras County, on soils comprised of a layer of schist over dolomite-rich limestone. Elevation of the vineyard is 2000’.

Our 2018 San Roriz was hand harvested and placed whole cluster into a one ton fermenter, where it rested for ten days undisturbed under a blanket of carbon dioxide. After these ten days of repose the fruit received a vigorous pigeage, and the next day the ferment smelled so compellingly savory we decided to press it immediately. The wine was put down to neutral 227L barrique, where saw seven months of elevage before being bottled unfined and unfiltered on April 30, 2019, this wine received no additions of any kind, and no sulfur was added.

Grown on the Rorick estate vineyard in Calaveras County, on soils comprised of a layer of schist over dolomite-rich limestone. Elevation of the vineyard is 2000’. The Mondeuse vines in our vineyard are a mix of clones taken from both the Lagier-Meredith vineyard on Napa’s Mt. Veeder as well as from Bien Nacido Vineyards in Santa Maria Valley.

The fruit was hand-picked and fermented in a single open-top vessel with 100% stem inclusion; vigorous pigeage was undertaken to break up the clusters upon reception. The must received pigeage and/or punchdowns twice daily; fermentation lasted 14 days at which time the wine was pressed down to a single 500L puncheon of neutral oak. The wine was racked off of its lees at 8 months and saw a total of 13 months elevage. Bottled unfined and unfiltered. As with all Forlorn Hope wines, no new oak is utilized, and nothing was added to the must or wine (no cultured yeast, ML bacteria, water, tartaric acid, enzymes, nutrients, etc) with the exception of minimal effective SO2.

About the Author: Lifford Wines and Spirits

In 1995 Steven Campbell purchased Lifford Wine Agency. As a seasoned restaurateur of twenty years, Steve was passionate about wine and jumped at the opportunity to acquire a small but excellent portfolio of Californian, Australian and Italian wines. Eager to expand the portfolio, Steven travelled the international wine roads to find regional superstars whose families owned the land, tilled the soil and breathed life and vitality into their wines. Today, with two recent, exceptional acquisitions - Saverio Schiralli Agencies and Prevedello and Mathews, the company sells from coast to coast in all ten provinces, and represents several hundred meticulously chosen producers, a truly international collection of the world's finest wines and spirits. Driven by Steven's passion and expertise, the dynamic Lifford team of wine professionals has forged a unique national identity.