The LCBO Destination Collection (and its thoroughly hidden gems) 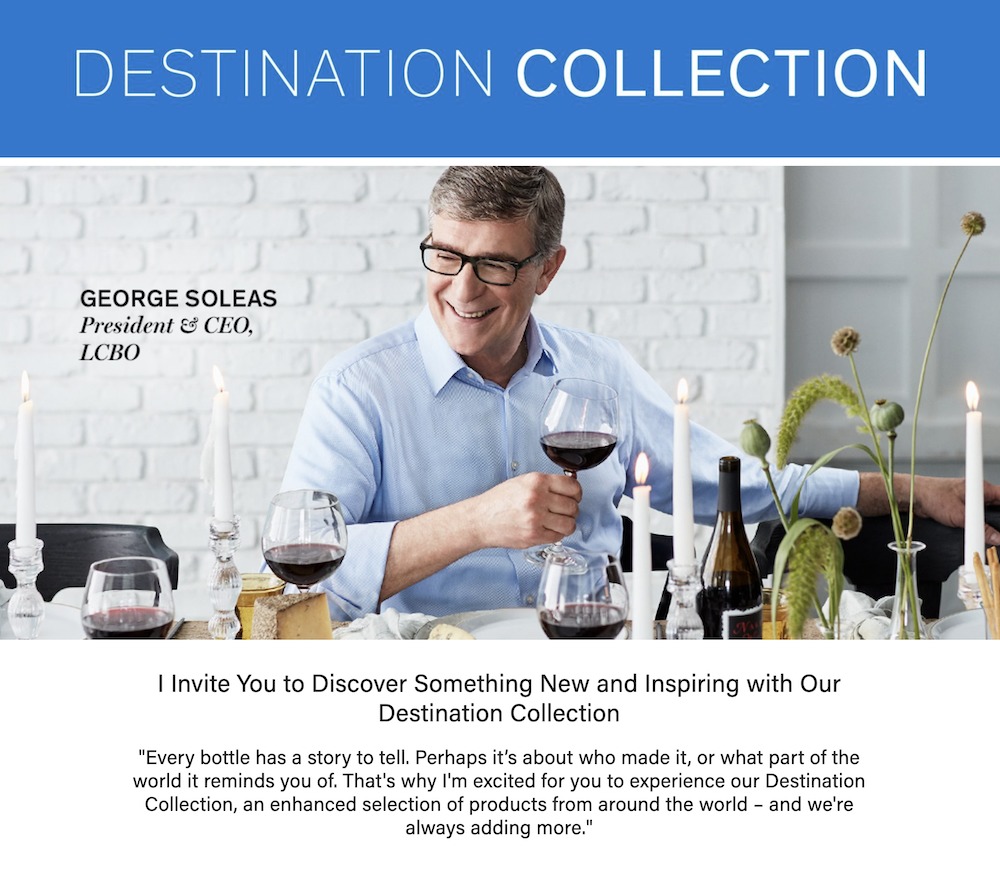 Just the other week I asked a couple of wine-loving friends (one wine industry, one not) how familiar they were with the LCBO’s Destination Collection.

“Nope, never heard of it” stated one, “Not at all” said the second.

And then only today, I mentioned the term Destination Collection to a restaurant industry veteran, a fellow with a serious background in wines. Did he know what it was?

“No idea. What is it? Is it, like, winery tours or something?”

And these are three rather well-informed consumers who all spend a fair bit of their disposable income (and in the case of the third, his restaurant’s) on wine, so surely they would be the target demographic?

Through my inquiries over the past few months, it would appear that very few know that this LCBO program even exists; since its inception I’ve always felt that the LCBO’s Destination Collection program deserves to be better known amongst those Ontarians who enjoy wine.

Over the past few months it appears that the LCBO have finally started to market this channel for getting some really interesting wines into the mouths of the people open to trying bottles that are bit more off the well-beaten path of the General List/Vintages/Vintages Essentials triumvirate, and finally there’s a process in place that allows for the online selection and ordering of these wines. Spoiler Alert: It still requires some serious work.

Previously referred to as Products Of The World, the Destination Collection offers a much enhanced collection of wines, usually from lesser-known regions and producers, often made from less-familiar grape varieties. If the truth be told, and I’m certainly dating myself here, I find the selection rather closely resembles the way Vintages used to be back in the halcyon days of the late Claudius Fehr and Lloyd Evans, a couple of gentlemen who were, at their very cores, wine lovers. Back then, and I’m talking two decades back, each monthly Vintages release was an adventure, stacked with all manner of exciting bottles, many in the sub-$20 category.

The brainchild of George Soleas, The LCBO’s visionary President and CEO, the program was an integral part of his goal of the LCBO being viewed as best liquor retailer in the world. To that end, the Destination Collection (née Products of the World program) was designed to increase the selection of wines and spirits offered throughout the LCBO system to Ontario consumers.

Originally the Destination Collection provided customers a wider selection of products from a specific country or region, with each country/region collection being featured in one LCBO retail location (with 3 stores for Kosher, 2 for East Asia, and a surprising 20 for Ontario!). Many of these store locations made complete sense and turned out to be the most successful as they were in the correct neighbourhoods and hence also benefited from a licensee draw: the Greek Boutique , being situated on the Danforth in Toronto’s east end, and the Portuguese Boutique north of Little Portugal on St. Clair West.

Others make a lot less sense, like the South African store in Pickering, the Californian store at 401 and Weston Road, and the Argentinian store in… errr, Aurora. Unless I’m completely ignorant as to the dispersal of certain diaspora within southwestern Ontario, seriously, I scratch my head as to why these locations were ever selected. More recently, just the other month actually, the LCBO opened a new store specialising in wines from Croatia, Slovenia, Hungary and Austria at the Dundas St. and Mavis Rd. location, Mississauga. 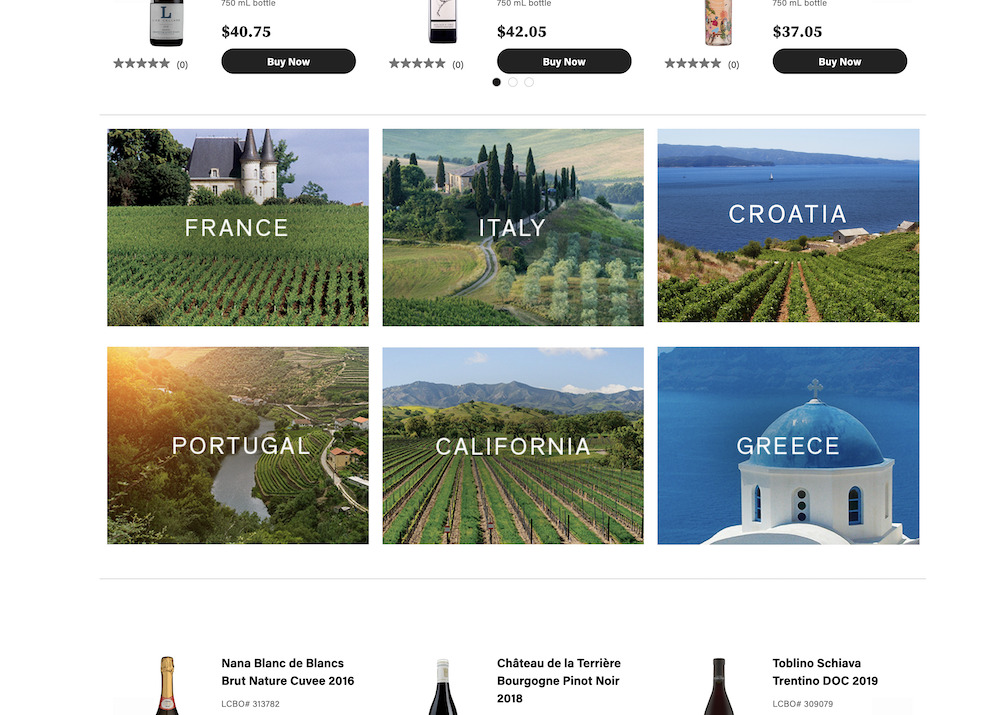 On a related note, things begin to get a little interesting when one looks into what happened around eight years back. One of the suggestions contained within the Provincial report by Ed Clark, the Chair of the Premier’s Advisory Council on Government Assets was that Ontario should have “Specialty Boutiques” to focus upon one particular region/country of products. At this point I feel it would be prudent to clarify that this was the exact same report that went on to allow for the sale of beer and wine in Grocery stores.

To quote directly from his presentation of October, 2014:

“We already have private specialty wine stores – I will get into this topic a little later – but they carry only the products of the winery that owns them. The LCBO already gives lots of shelf space to domestic wines. So the real issue is whether we need more access points. Probably not. But would the system be better if we had some private sector competitors innovating in the retail space? Perhaps, but we are cautious about how far to go.”

So privately-owned Specialty Wine Shops were most certainly discussed and contemplated by Ed Clark at this point.

Predictably, many in the industry feel that the LCBO saw the potential for “Private Boutique Specialty stores” as an existential threat, and so opened the aforementioned Greek Boutique in May of 2015 with a selection of Greek wines that were in the Consignment program in an effort to show that they could do Specialty Shops. The Greek Boutique was opened with quite a fanfare, and in doing so, some, to this day, feel that Products Of The World was in many ways successful in stymieing the progressive move towards independent private wine shops.

Of course, COVID really mixed things up re: private wine shops. The advent of laws ostensibly allowing everyone with a licence to open their own bottle shop changed the wine retail landscape for good, as that genie certainly isn’t going back in the bottle; but that’s a story for another day…

In speaking with a number of wine agencies about Destination Collection, there seem to be quite mixed opinions about the overall effectiveness of the program. Whilst they all welcome the opportunity to increase the volumes of product they bring in from their international winery partners, many initially used the Destination Collection to augment their consignment program case numbers (particularly important for smaller, newer agents); this practice of drawing from consignment wines ended almost a year ago. Many of them identify issues that not only make the entire process less viable for them, but also fetter the consumer access to these unique wines.

One of the biggest challenges for start-up wine agencies is actually having access to wines to sell. The barriers to entry into the LCBO Consignment Program have recently been lowered, but before that happened the POTW/DC program was seen as a terrific way for small agencies to get the wines of their partners some exposure in the Ontario market.

Many agents and suppliers (read: producers) see the Rules and Guidelines for getting a product into Destination Collection as onerous at best. Importers are charged LCBO lab analysis fees for every vintage of every wine sold in Ontario; for large volume suppliers (i.e. those in the General List, Vintages Essentials, or even Vintages), the marginal cost of these fees is relatively small, however Destination Collection order volumes are typically 20 – 30 cases, so these charges add materially to the final cost of the wine (or limit the margin of these small, independent wineries). These rules are very difficult for wines imported in smaller volumes, supposedly the types of wines that the program was designed for.

However, the LCBO is still working on improving the marketing and merchandizing of these wines, and as I observed at the opening of this piece, many Ontario consumers have no idea they are available, how they can find them, or how to purchase them, so the sales and promotion fall, almost exclusively, to the importing agent, meaning that they are wholly responsible for the wines’ sell-though or, more importantly, failure to sell-through.

With both Destination Collection and Vintages, the LCBO will discount the price to clear out remaining inventory, something that at first looks great for the consumer, as who doesn’t like discounted wine, right? For Vintages a wine must sell 75% or more of the order quantity otherwise they will be held responsible for 30% of the quote price for any cases discounted, meaning that payment to the winery is discounted by 30% on all remaining stock. For Destination Collection a wine must sell 100% in 12 weeks from date of availability otherwise the producer will be held responsible to fund the discounted pricing to the consumer, so with this program the agent and supplier have a more difficult sales target to avoid this rebate charge.

Although the LCBO controls the success of sales here, the supplier is constantly on the hook for this rebate, so, as one can imagine, this makes things rather challenging for the agent, as they have to ensure the product sells through or a quality producer will never submit a wine for this program. 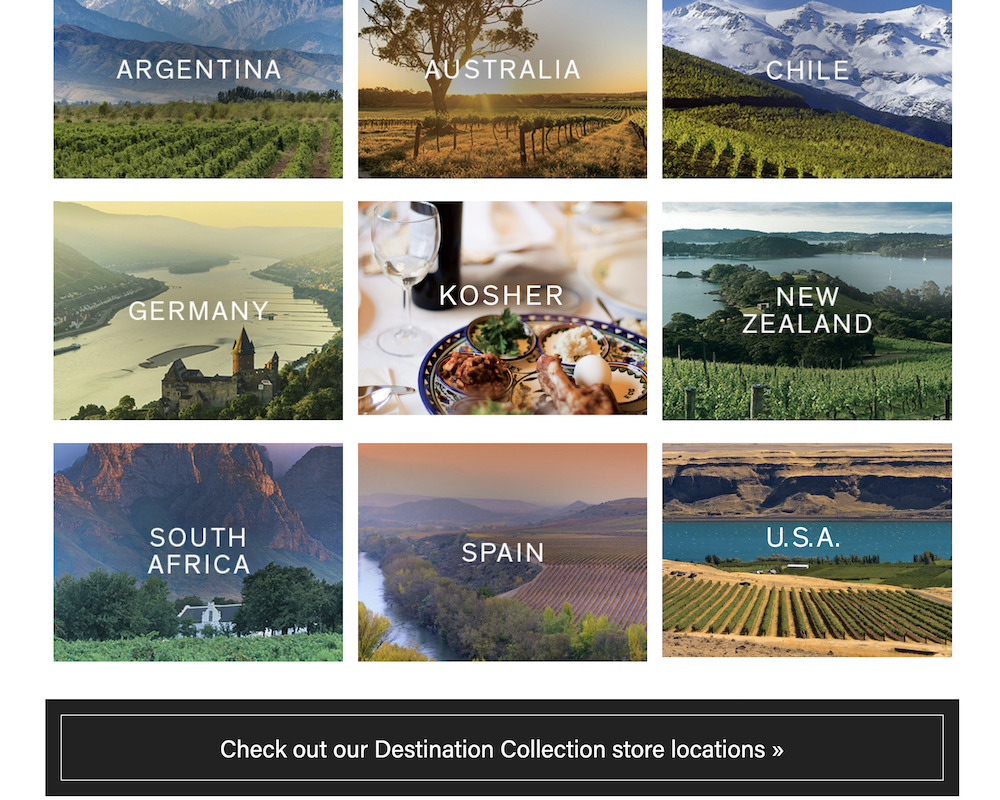 Another area where many agencies (and licensees) see failings is the fact that said licensees (i.e. Ontario restaurants and wine bars etc.) would be ideal candidates for many of the wines offered through the Destination Collection, however they cannot purchase online at lcbo.com, which, in my mind, is a major shortcoming of the program.

This functionality that would allow them to purchase stock from LCBO.com under their license number has yet to be enabled, however, in a rather peculiar workaround, if an online exclusive product were to end up in a retail store (as the result of a customer return etc.), this particular inventory could actually be purchased by a licensee. The mind boggles…

It appears that many “online exclusives” are having a hell of a time selling through as so few people are actually aware of them, perhaps partly due to the LCBO.com online portal not being the easiest to navigate and hence so many online releases fly under the radar… well under the radar.

Just try searching for wines from the rather excellent New York “online exclusive” wine release from earlier this year. Can you find them? It takes some work, but there are still loads of those great wines hidden in the online system, lost in the shiny silver box that is the LCBO’s online sales portal.

So how best to get the word out there about all these great vinous buried treasures?

Well… a stronger promotional and merchandizing plan by the LCBO for one, perhaps including a full-page ad in every Vintages release magazine (and emailer) about the program and recent releases; that would be a good start?

The simplification of what is a confusingly complicated online retail website?

And then opening up the online ordering system to licensees, as surely that’s a no-brainer?

I felt that it was important to share my observations with the GFR readership and remain hopeful that this drives some meaningful discussions regarding improvements to the program; the Destination Collection concept is a fantastic opportunity for all involved if it works to everyone’s advantage.

Operational challenges aside, I’m sure such relatively small changes wouldn’t be so hard for an organization like the LCBO. 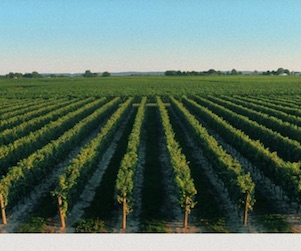 Canada 150 Prelude at My Kitchen Table 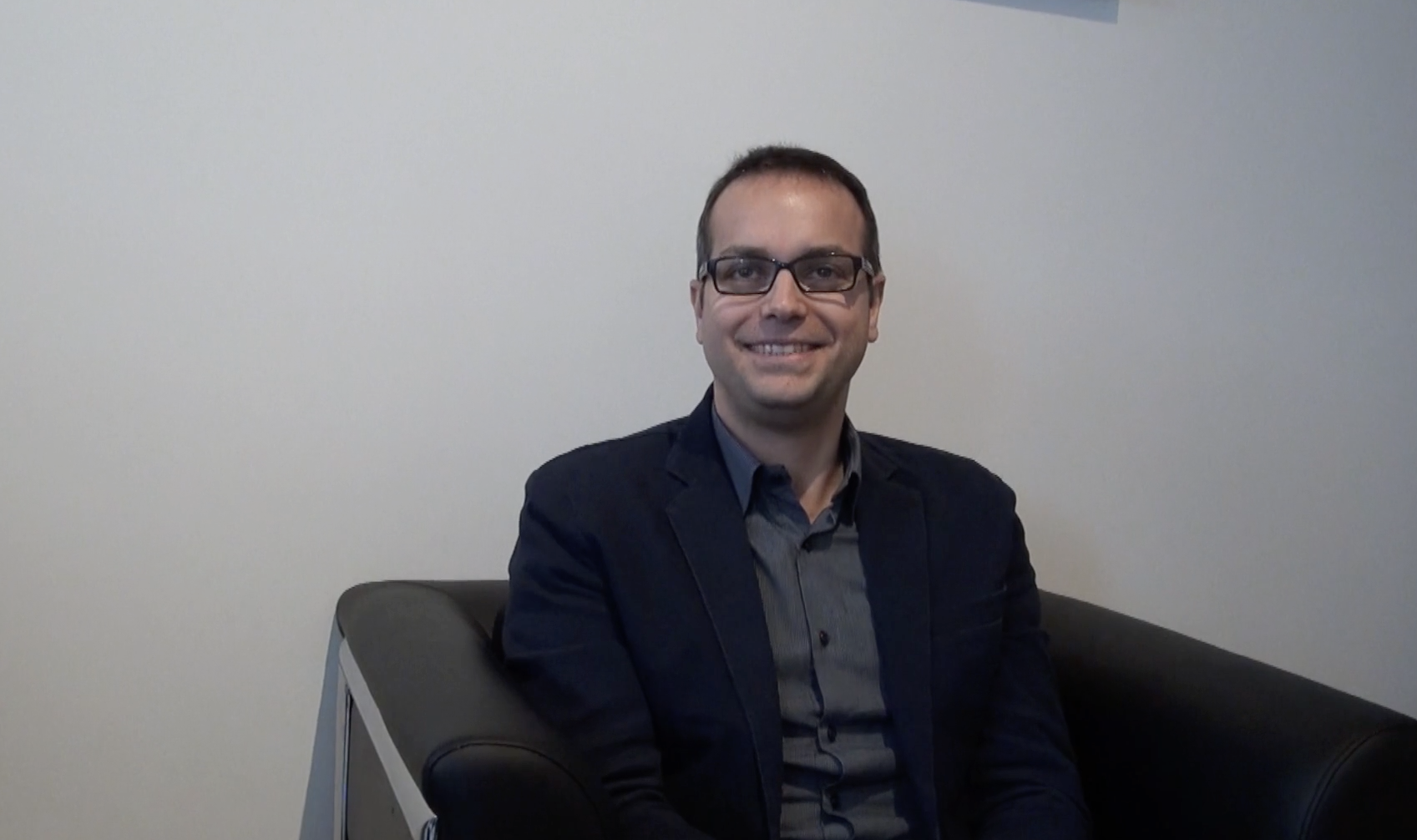 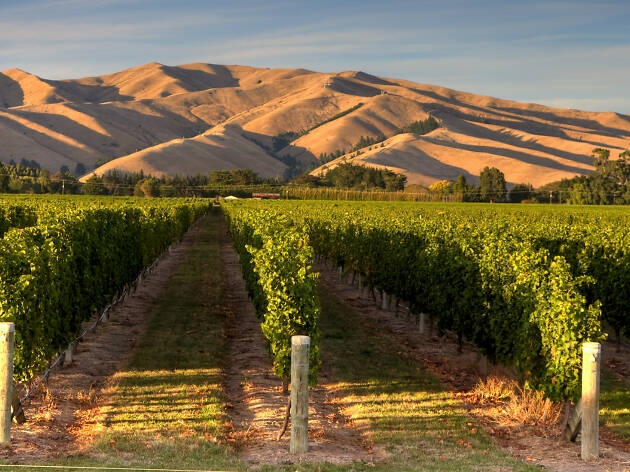 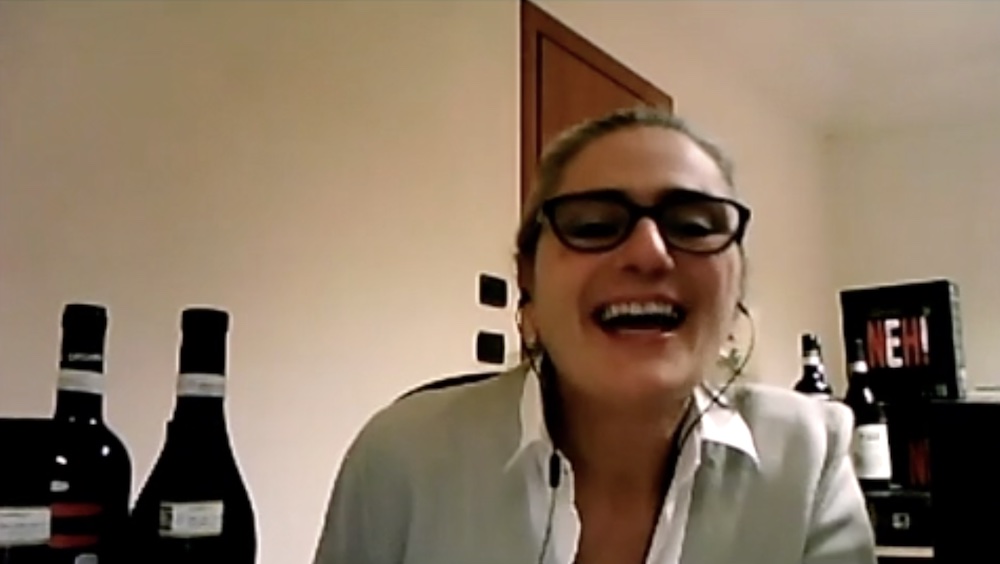