Volcanic wines of the Canary Islands

We were very honoured and excited this week to have visiting Mr. Alec Dorsaint – Pierre of Bodegas Viñátigo in the Canary Islands.  He was able to provide us an overview of the terroir and viticulture of this remote region.  Here is an recap of what we learned about this unique and fascinating region.

The Canary Islands: An Overview

Located just off the coast of Morocco this Spanish wine region has been producing wine since the 15th Century.  This collection of Islands located in the Atlantic ocean offer 10 distinct regions and a multitude of growing conditions.  In fact the Canaries hold the record for highest mountain in Spain and third highest volcano in the world, on the Island of Tenerife with the active volcano El Teide.  The collection of islands are so remote that phylloxera has not reached them allowing vines to grow on their own rootstock.   While the Canaries can boast spring like weather all year round each island has various microclimates but what they all share is the presence of mineral rich, volcanic soils resulting in very unique and fascinating flavour profiles. 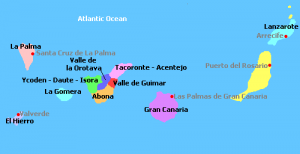 The Islands lying to the West are influenced by the Golf Stream which brings a cold sea current providing a cooling effect to the area.  The tradewinds have the most impact travelling around 25km/hr and operate on two levels, the lower trade winds arriving from the NE are cold and humid.  The second level arriving from the south are hot and when these two winds meet they produce a collection of clouds above the Islands know as the sea of clouds.  As for the more eastern Islands, they are more dry and considered to have semi- to desert like conditions.  The sand storms from the Sahara reach these islands blanketing them in red sand.  The most extreme climate is located on the most eastern island of Lanzarote with it’s harsh volcanic landscape.

Grape cultivation on the Islands is in many ways traditional, while some producers are using more modern training systems many producers are growing grapes the way they have for most likely centuries.  These techniques are often quite unique to the area adapted for their unique land composition and climatic conditions.
Lanzarote carries the youngest volcanic soils due to it’s intense history of eruptions as such much of the top soil is covered in volcanic rock.  In order to grow vegetation, including grapes,  farmers must dig a small crater in order for the vines to access the nutrient rich soil below the rock (pictured below).  That’s not their only challenge, small stone walls must be built around these holes, known as a hoyo, to protect the vines from the high speed winds.  Hundreds of these little pockets make up a “vineyard” with camels and mule doing most of the heavy lifting during harvest.  The most important island in terms of wine production is Tenerife with a total of 5 DO’s on the single island and boasting vineyards up to 1700m above sea level.   Bodega Viñátigo is located here in the south western DO of Ycoden Daute Isora.

You can also find unique vine training vines on the other islands.  Creeping vines grown along the groud until June when they are lifted by a wooden fork and elevated to approximately 70 cm from the ground.  Historically the elevated vines freed up valuable land space allowing for the production of other  products such as potatoes, wheat and other vegetables.  The traditional training system for Malvasia was braided vines still utilized today in the mountainous regions, this system fruits only at the end of the canes. “Some of these ancient multi-stranded vine tendrils stretch a total of 10 metres both up and down the hillside from the main trunk.”(http://www.jancisrobinson.com/articles/the-canaries-where-vines-and-wines-creep-up-on-you) 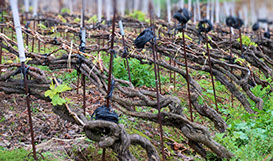 We are very excited to be bringing these very special wines from Bodegas Viñátigo into Ontario.  If you are interested in ordering any of these wines you can find the offer here.

“The wines really are very varied – not just stylistically but qualitatively. One of the best producers is Viñátigo which makes extremely stylish dry whites, including one from the local Marmajuelo grape, as well as a light, sweet but spine-tingling pale Malvasia Clásico. Wines like this must have been made since the Middle Ages when merchant fleets brought the Malvasia grape from the Aegean to these islands and, fatefully, Madeira to the south.”
Jancis Robinson:  http://www.jancisrobinson.com/learn/wine-regions/spain/canary-islands