Beau’s Oktoberfest happens every year on the fairgrounds of the brewery’s hometown of Vankleek Hill. In a few short years it’s grown from a few hundred local enthusiasts, to a big event attended by thousands of hopheads that pulls crowds young and old from Ottawa and Montreal, which are each about an hour away.

I went to my third Oktoberfest last weekend, and had the great privilege of appearing at the Beau’s All Natural Brewing’s festival’s ‘School of Bock’ with cheese and beer expert Andrew Laliberte (see below). On Saturday, after our seminar, I walked around the fairgrounds with my camera and took the shots below. 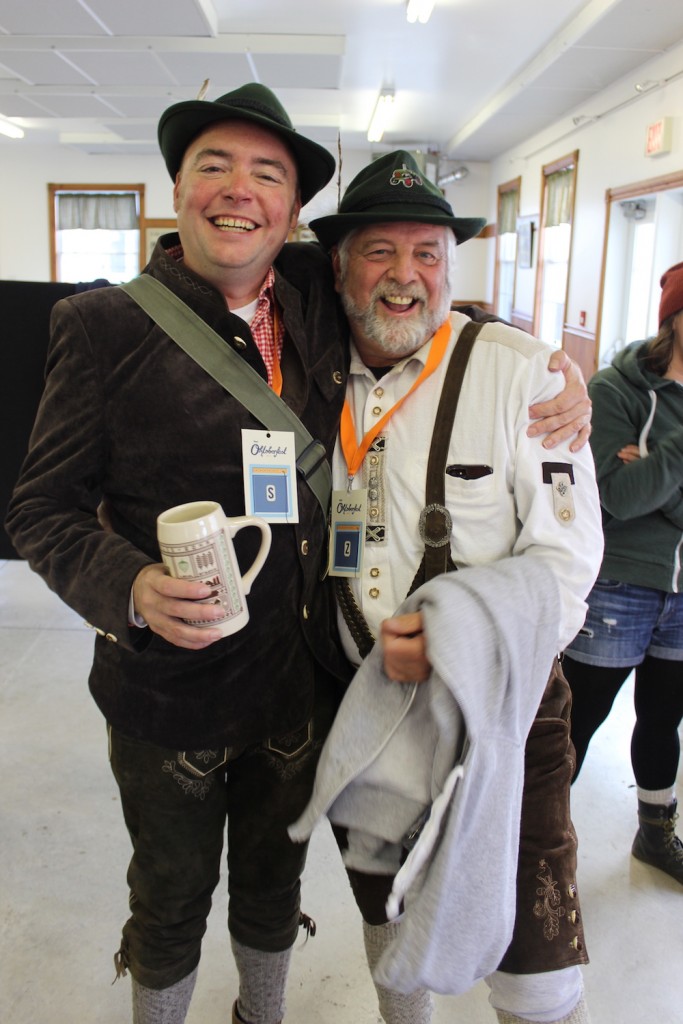 Brewmaster Matt O’Hara and Co-founder Tim Beauchesne
Beau’s really is a family business, with many members of the Beauchesne family working together to make all natural beer, including pater familias Tim, hanging out here with brewmaster Matt O’Hara. It’s also a family business in the sense that all involved really do seem to feel like a family, which is a sentiment that spreads around the event. 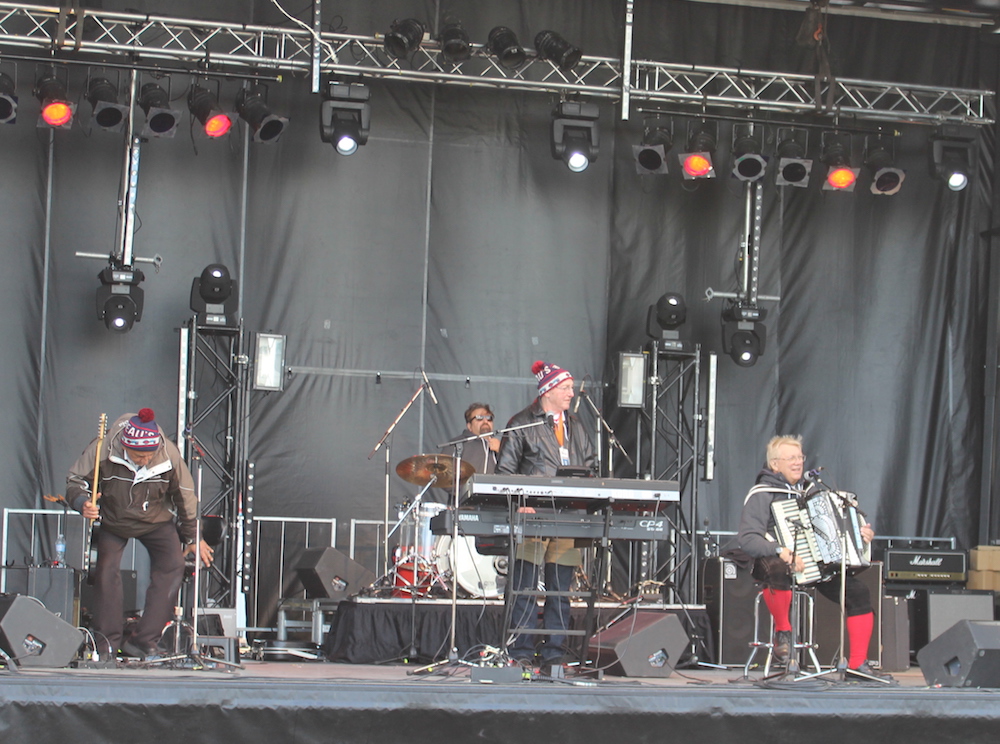 The Walter Ostanek Band on the MainStage
How could it be Oktoberfest in Canada without Walter Ostanek (seated at right) and his legendary band? It couldn’t. Multi-grammy winning, accordion-wielding Master of Polka played a marathon set of beer drinking songs all day Saturday, warming up the crowd for the rock bands that night. The Mainstage was one of three: a smaller punk stage was set up (with its own beer tent of course) by the skateboard park area, and another stage was set up near the horse ring of the fair for competitions, like keg tossing or stein holding. 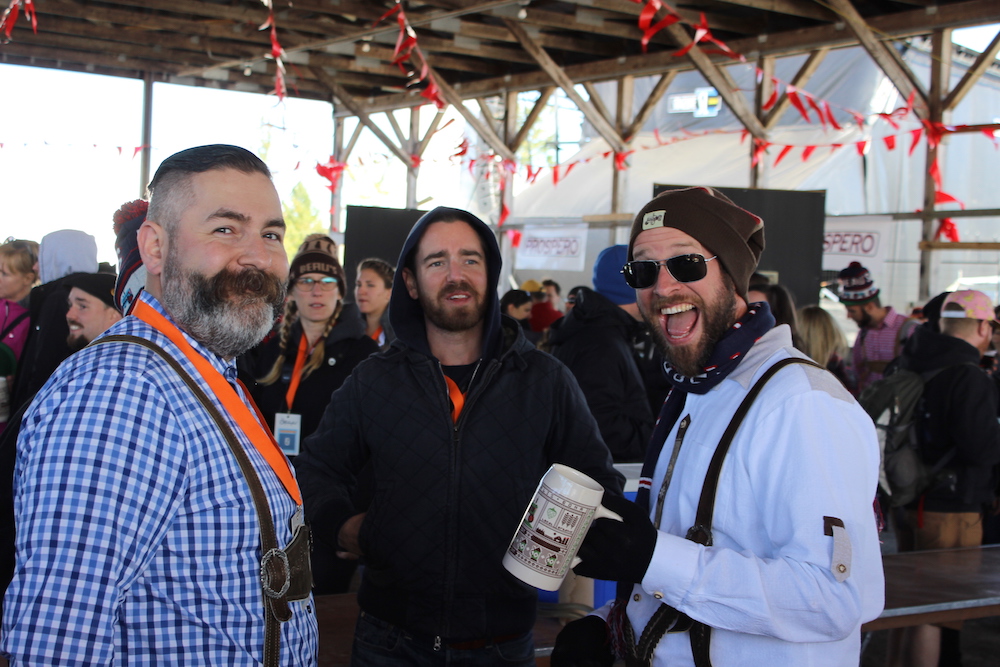 Rob ‘Stuntman’ Morra, friend and Steve Beauchesne
Rob Morra’s Oktoberfest domain was the craft beer tent, where Beau’s features all of its Oktoberfest brewed beers in caskes, and a whole array of rare Beau’s beers, beers made by other ‘guest’ breweries from Ontario, Quebec and The States, as well as Beau’s ‘B-Side’ collaboration beers made with other brewmasters but in Vankleek Hill. By about 2pm on Saturday, most of the kegs had run dry. 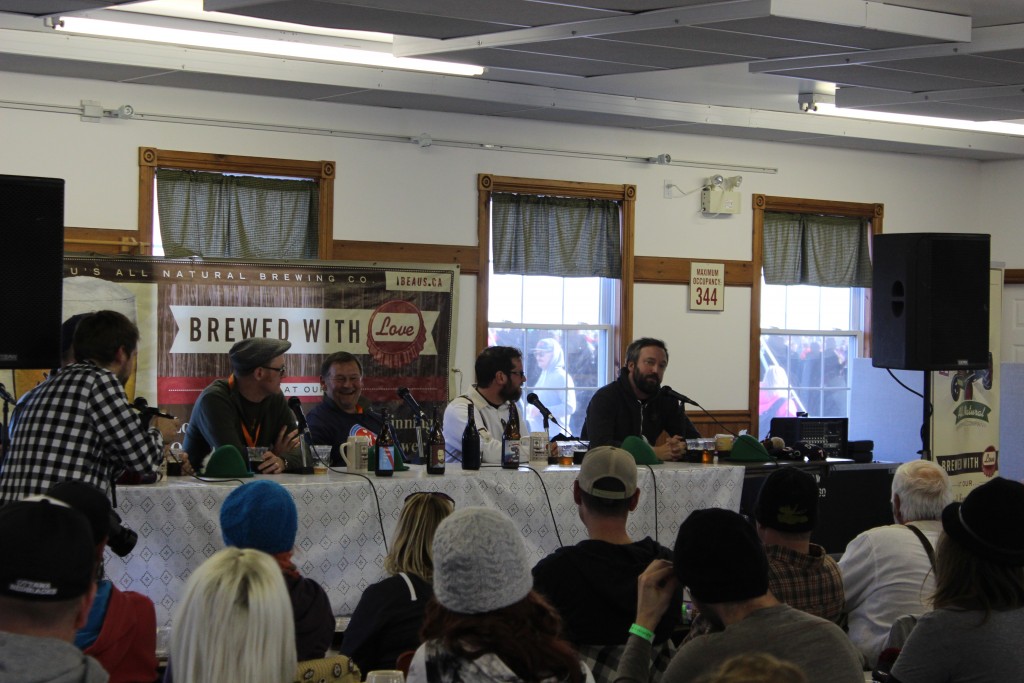 Collaboration Panel at the School of Bock
Beau’s president Steve Beauchesne sat on a panel at the School of Bock called: ‘Collaboration without Limitation: Meet The People Crazy Enough to Work with Beau’s’. MC’d by The Bar Towel’s editor Cass Enright, Steve invited Tom Green (of television and internet fame), Danish brewing legend Anders Kissmeyer, and brewmaster Ben Love (obscured in the shot) and master brewer Van Havig from Portland, Oregon’s Gigantic Brewing Company. War stories did abound, but Steve made the key point that the Beau’s B-Side collaborations were as much about getting beer made by his favourite brewers available for sale in Ontario, without much red tape, than anything else. 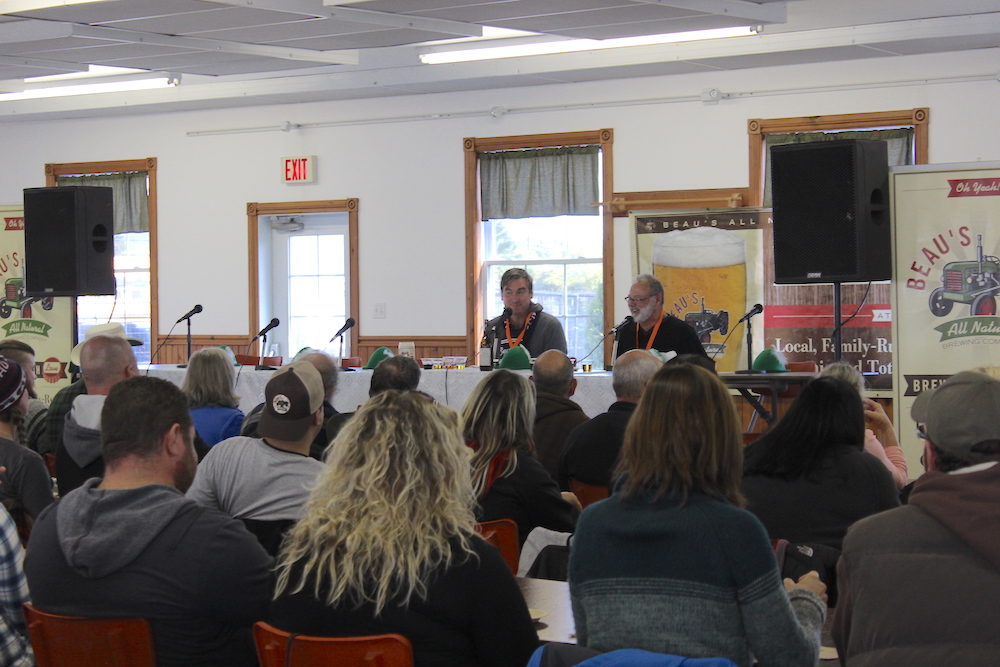 Andrew Laliberte and Beer Pairing 101
There is no question I had the easiest job at Oktoberfest 2015, which was sit down at a table with a couple of microphones and listen to Andrew Laliberte talk about beer, cheese and how pair them together. Andrew, of Glen Echo Fine Foods, is one of the country’s foremost experts on fermented curds and, as a former sommelier, knows a thing or two about matching them with beverages. Andrew has also had a long professional association with Beau’s, including being part of the team that developed the brewery’s own cheese along with Gunn’s Hill dairy, so he’s super familiar with all their beers. It was great fun and sold out. [Photo: Alec Jolley.] 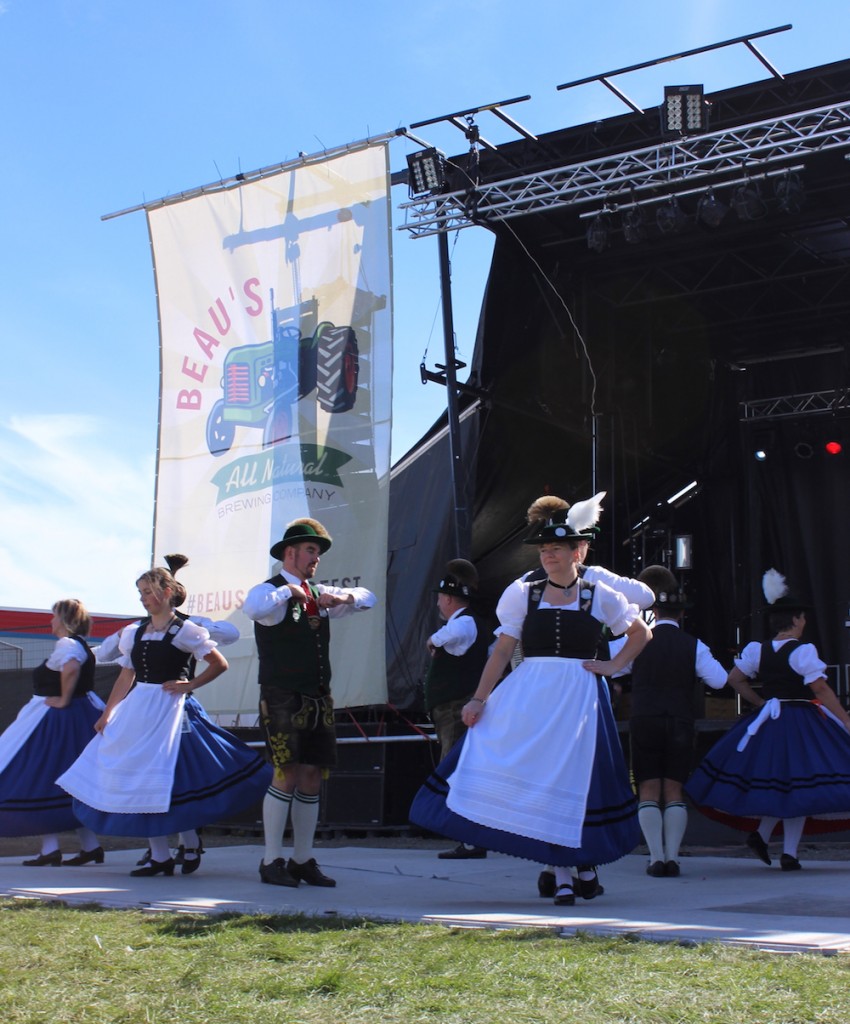 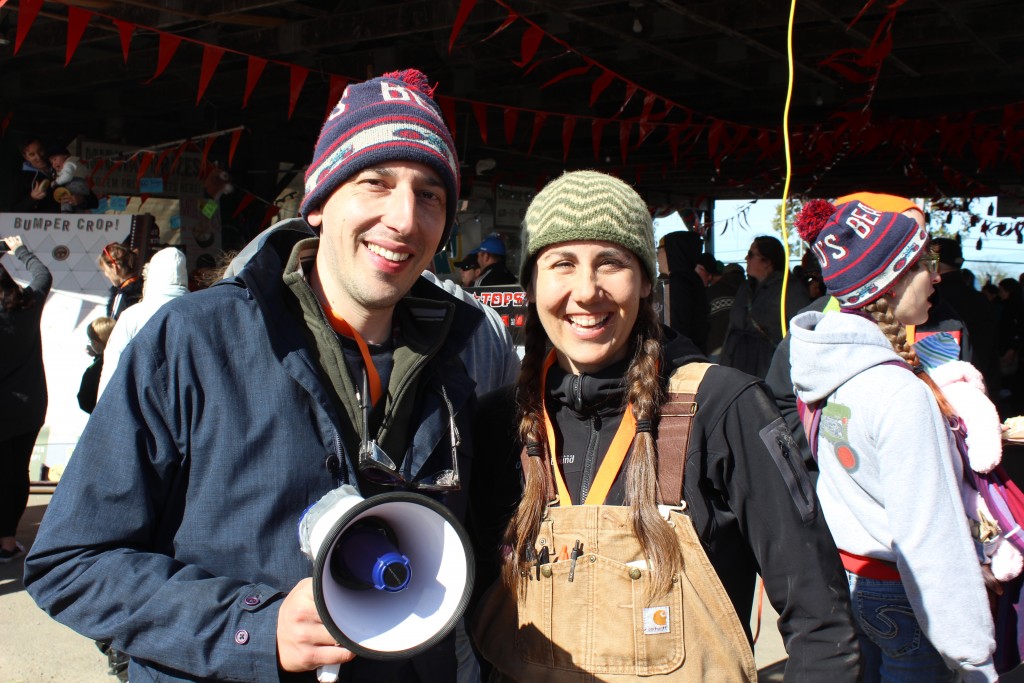 Hidden Harvest Midway
This year, instead of Jamie, I brought my 12 year old son Alec. Remember what I wrote about Beau’s being a family brewery? Well, they also put on a family Oktoberfest. There’s lots to do there besides drinking beer, including the fine array of non-electronic games of chance and skill at the midway. This year the funds raised by the games went to Ottawa’s Hidden Harvest. Founders Jay Garlough and Katrina Siks (pictured above), explained to me how their project to collect urban tree fruits and nuts, which would otherwise rot or be thrown out, and share it with food banks is both similar and significantly different from Toronto’s Not Far From The Tree. Watch out for more on them in GFR. 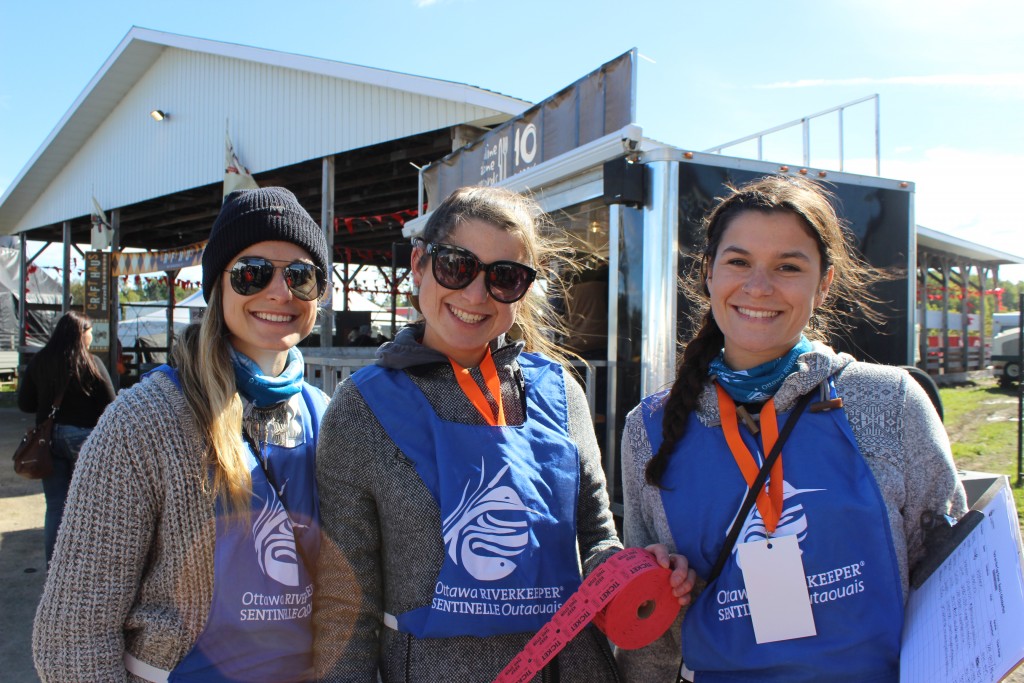 Ottawa Riverkeepers
These cheerful and environmentally conscientious volunteers sold me the opportunity to have my picture on the top of 100,000 Beau’s All Natural Brewery bottle caps, if I won their raffle. The Ottawa Riverkeepers is just one of many charities that Oktoberfest supported this year, others being The United Way and the Hawkesbury hospital. Oktoberfest is a fundraising event, and the proceeds support the causes that Beau’s, a register ‘B Corporation’ chooses each year. 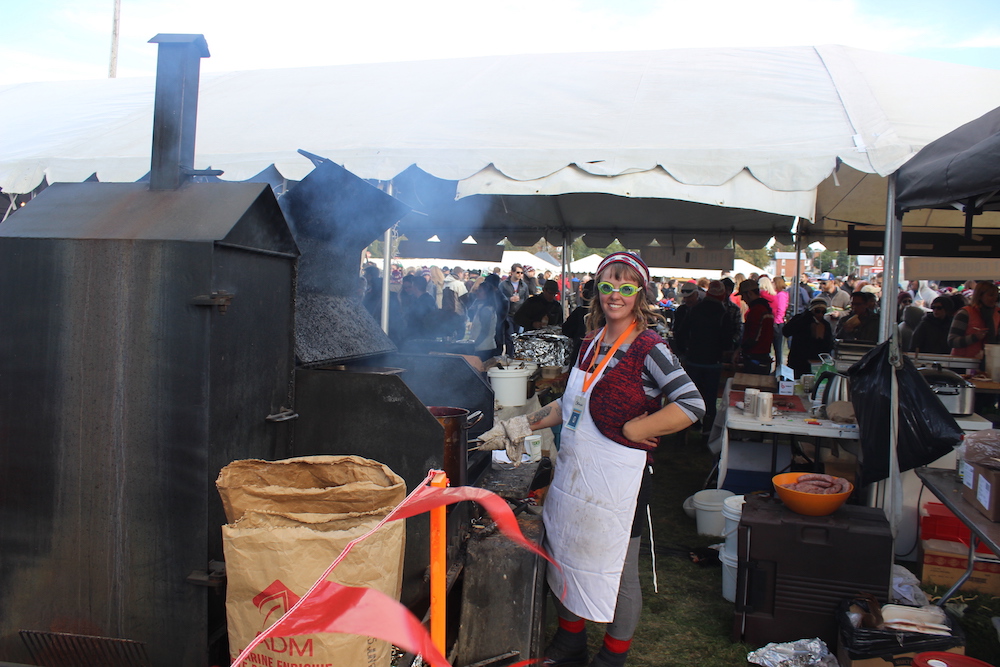 The Smoking Goggle Lady
Did mention that there’s food at Beau’s Oktoberfest? There is, and it’s all really good! Beau’s now has its own kitchen and chef, Bruce Woods, who cooks to pair with Beau’s beers and often with Beau’s beers. And, at Oktoberfest, that spirit of hospitality is extended dozen’s of Ottawa, Montreal and local restaurants, who each do a take on German food, and all manage to sneak some Beau’s beer into their schnitzels, wursts, or in the case of the lady above, smoked meats. Update, October 14: Pictured above (we know know thanks to Korina at Beau’s) is Amanda Giles from The Branch Restaurant and Texas Grill in Kemptville. 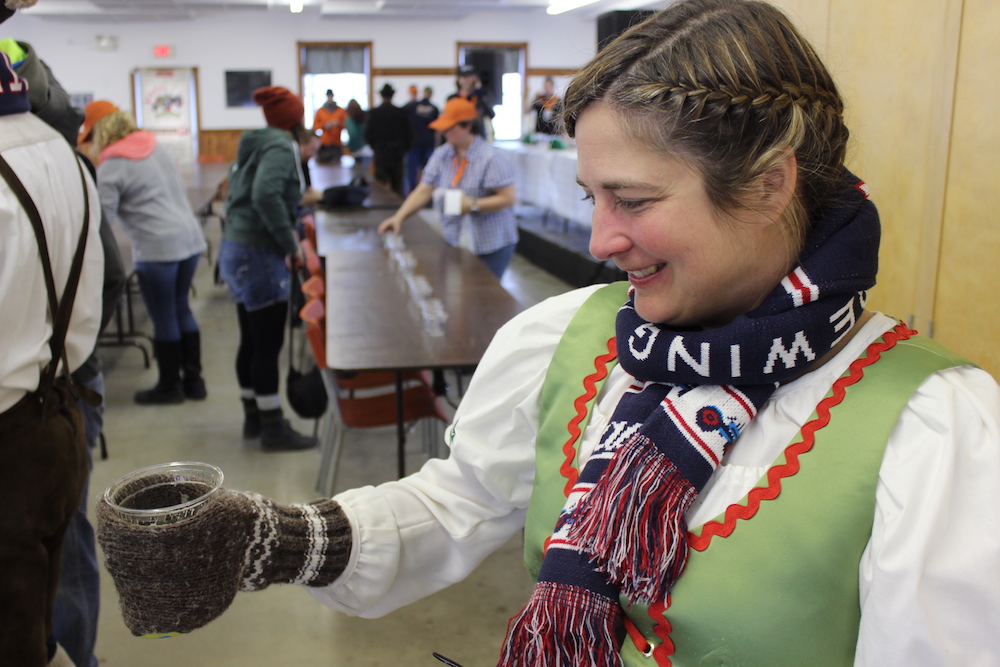 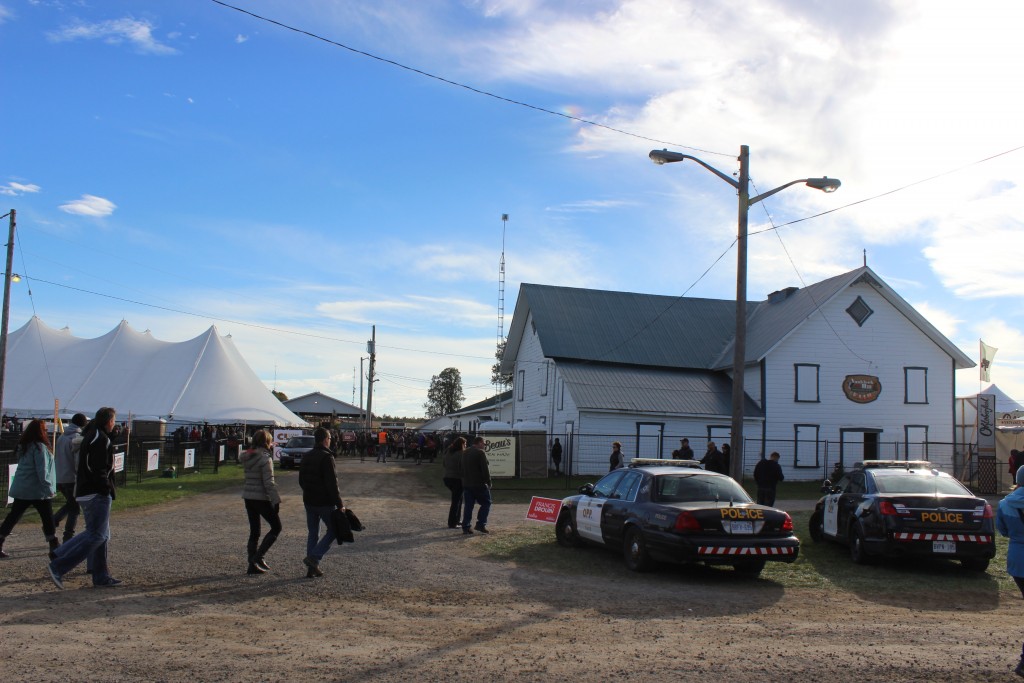 Police Presence
There were a smattering of police at Oktoberfest (like enough to maybe fill up two OPP cruisers), but what’s amazed me at each one I have attended is how peaceful and laid-back the event is. To host thousands of people, including busloads of university students, and provide them with more or less an unlimited supply of beer, without a fight, or an arrest, or any noticeable trouble is pretty amazing. 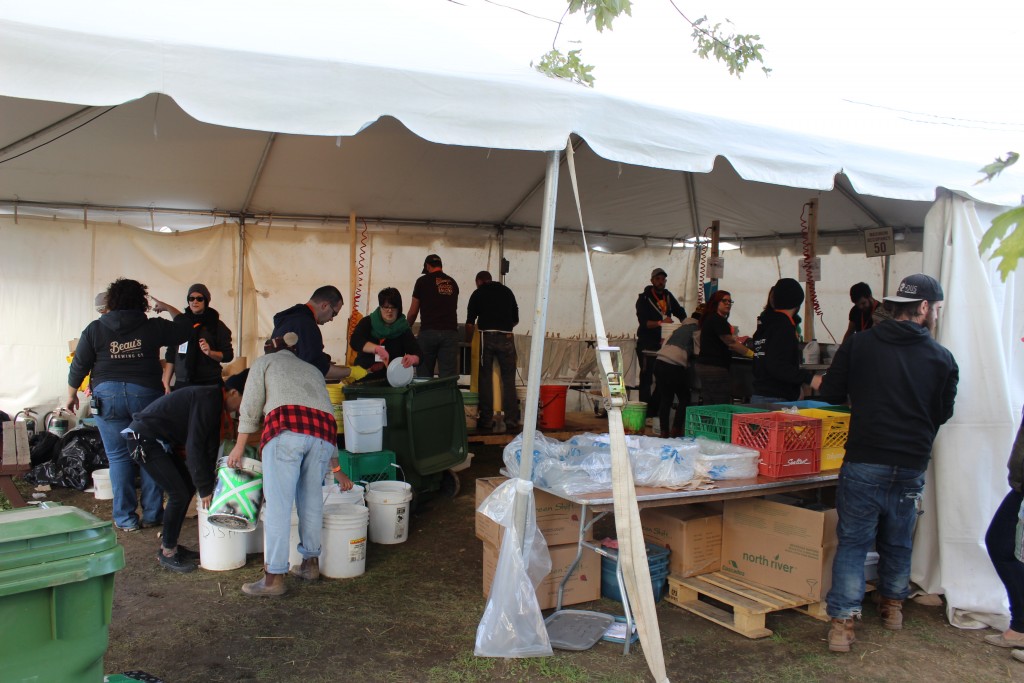 Clean-Up Crew
Beau’s is all natural and organic, so they’d hardly throw a party without considering the environmental impact. All disposable items, like cups or plates, were compostable. And cutlery was the real thing: collected at special recycling centres, and then collected to be washed and redistributed to the food vendors.

One Response to Beau’s Oktoberfest 2015