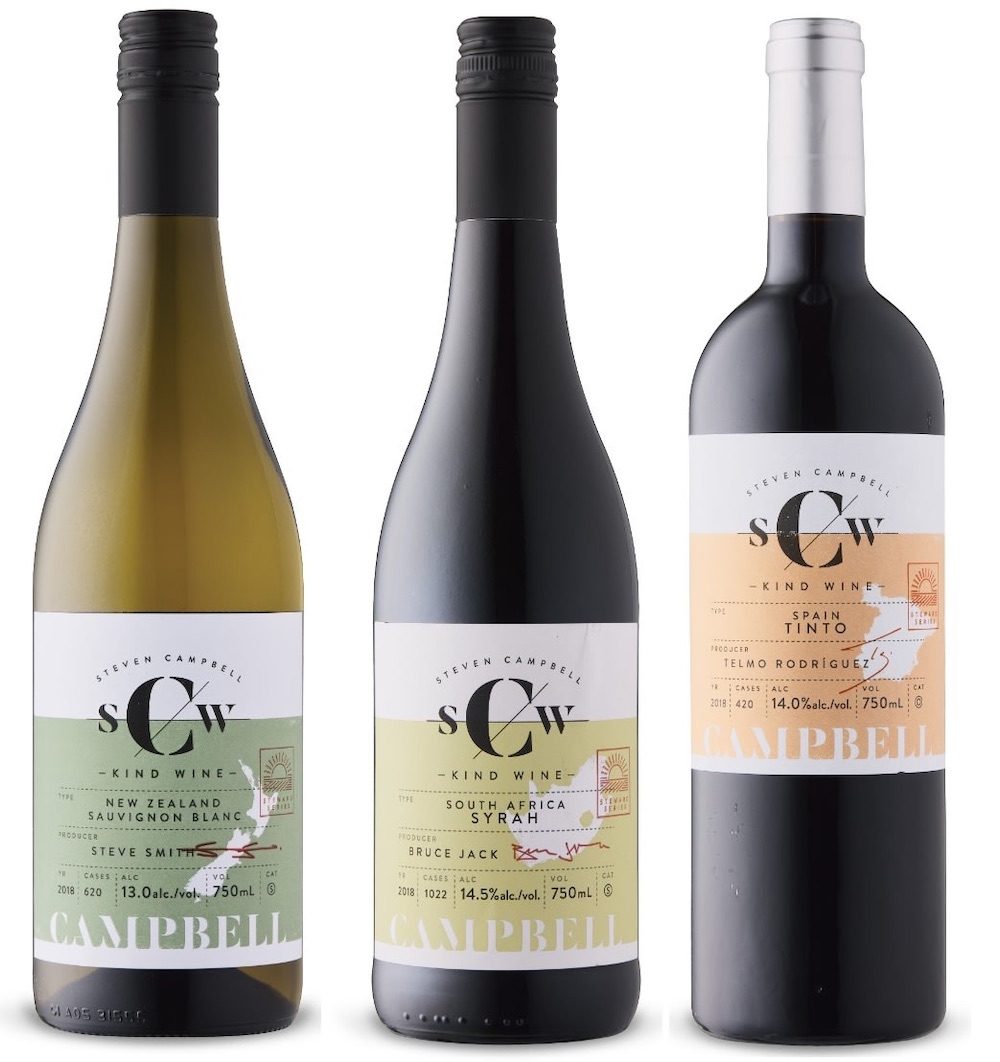 On Saturday, October 26, the LCBO Vintages program will release three Campbell Kind Wines: the 2018 Campbell Kind Wine New Zealand Sauvignon Blanc ($19.95 – LCBO# 10556), the 2018 Campbell Kind Wine Ribera del Douro Tinto ($19.95 – LCBO# 10705), and the 2018 Campbell Kind Wine Western Cape Syrah ($14.95 – LCBO# 10522). I tried all of them, and more, at a private tasting last week. The Sauvignon Blanc is from Marlborough and made by Steve Smith MW, who Jamie inteviewed for GFR earlier this year here. It’s a classic fresh Kiwi Sauvignon with passion fruit notes and grassy aromatics that sits pleasantly with weight in the mouth and punches well above its price point. The Ribera del Douro is a Tempranillo blend made by the new wave traditionalist Spaish winemaker Telmo Rodriguez, who Jamie also interviewed a few years ago here. It’s a deep rich Spanish red with black and blue fruit notes balanced off with a refreshing acidity that wants food, maybe a steak. And the South African Syrah is made by industry legend Bruce Jack, who I very recently interviewed here in connection to last week’s Wines of South Africa event in Toronto. If the first two Campbell Kind Wines to be released in Ontario are excellent value (and they are), this third is astounding. This spicy Syrah shows tremendous scarlet fruit and a vibrant acidity that brings water tot he mouth and makes the hand reach for another sip. In addition to all three wines being delicious and well priced, they share a few other common traits as well. Each one is certified as some kind sustainable product (organic, Ecocert, etc.), depending on where they were made. Each one is certified carbon neutral by Carbonzero, which has audited their production from vineyard to store shelf. Once Carbonzero determines the carbon footprint of each wine, Campbell Kind Wines offsets it, chiefly by planting trees. In this way each one is not only kind to your palate, kind to your wallet, but also kind to Mother Earth. Finally, each one exists because of the vision of one man, Steven Campbell of Lifford Wine and Spirits.

Full disclosure: Lifford is a paying sponsor, a.k.a. Good Food Fighter, of Good Food Revolution. And Steven Campbell is a friend of mine and of Jamie’s, so I’m biased. The Campbell Kind Wines line of wines he has created, with winemakers he’s worked with for many years is priced reasonably enough that GFR readers can try one, two, or three at low risk and decide if they like them themselves. What I think is beyond subjective opinion or the partiality GFR has for Lifford, is the fact that the project is a pretty interesting idea. I asked Steven about it while we tasted the wines, and he explained that after 25 years in the wine trade he realized that “you can’t preach to consumers”, and if he wanted to combine his passion for the environmentalism with his metier in wine he would have to give consumers what he believes they want: “a great wine at a great price, that also happens to be carbon neutral.”

The three wines coming to market in Ontario this fall, are part of a larger series (of eleven so far), that also include wines on their way from well known and respected producers in Australia, California, Northern and Central Italy, British Columbia and Niagara. Not all wines are for the Ontario market at this point, reflecting Lifford’s national reach as an agency. I asked Steven if it was difficult to get winemakers to get on board. He replied, “Not one said ‘no’, and they all said ‘yes’ the moment I asked”. Was it odd, I wondered, to have his own name on the labels, after building a career selling other people’s wines? He explained he hadn’t planned on calling the project by his name, but Steve Smith MW insisted he must. “Steve said,” said Steven, “If you don’t put your name on the label, no one will buy it, they have to know you stand behind it.” So he did. I put it to Steven Campbell that his kind wines seemed like a pretty good idea. Was he worried that other wine producers would copy it? “That’s the idea!” he said emphatically, “The best thing to happen would be if every winery made carbon neutral wine. We’re just proving you can.”