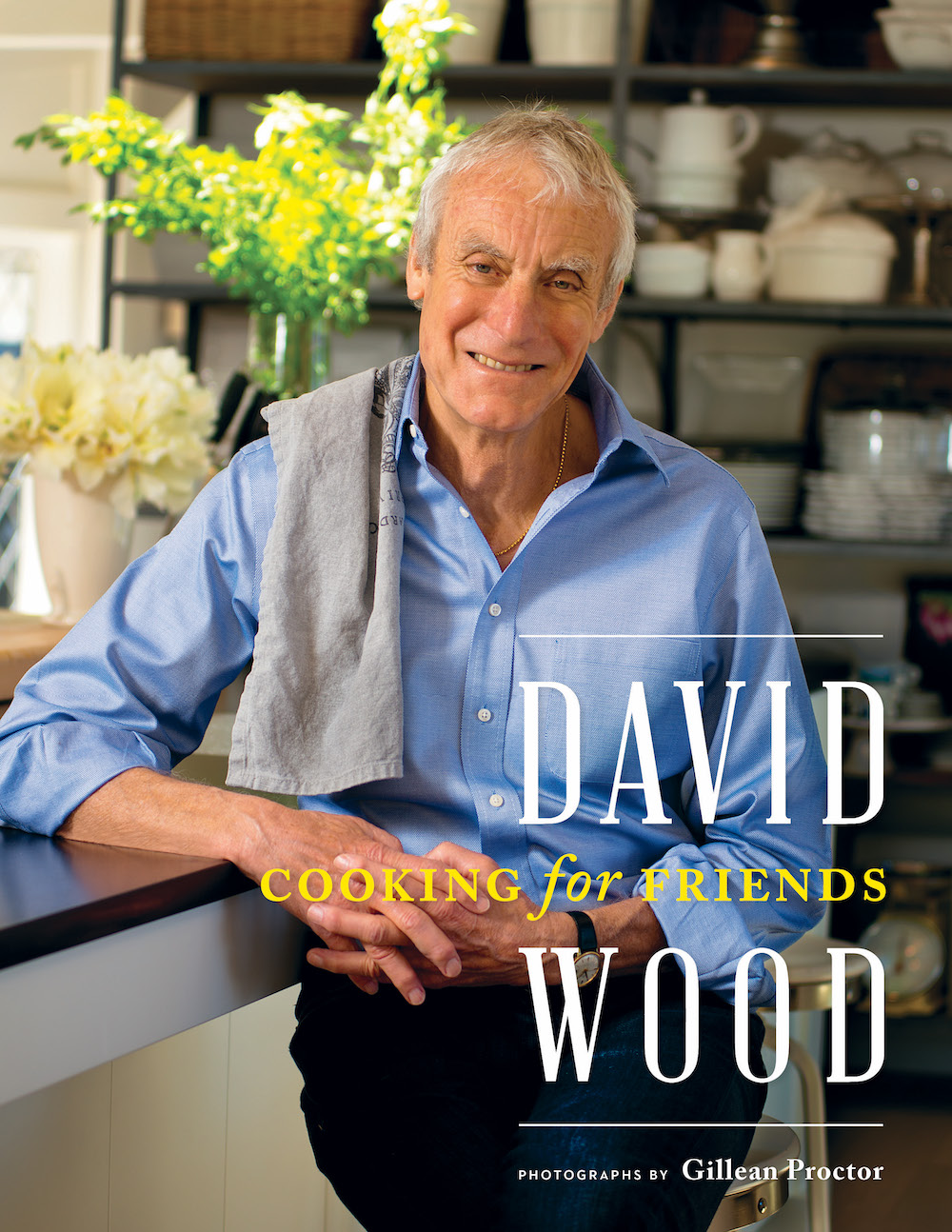 More than 30 years ago David Wood was the powerhouse of gourmet retailing in Toronto, with his stylish shops selling things that might have otherwise only be found in Manhattan or Berkeley. His success spawned a book deal and two classic Canadian cookbooks of the 1980’s: The David Wood Food Book (1988) and the The David Wood Dessert Book (1989, with co-author credit to master baker Daphna Rabinovitch, no less). Then, things went bad and suddenly the shops were shuttered and Wood was gone. He resurfaced in B.C., in the Gulf Islands where he started the Salt Spring Island Cheese Company, known for the sheep and goats cheeses adorned with a flower on top, and slowly got back into the gourmet retail business, only this time as a supplier. Now, Wood has re-emerged as a cookbook author with the recently published David Wood Cooking For Friends.Wood, who grew up in an English home in Scotland and retains his accent despite emigrating to Canada in the early 1970’s. Cooking For Friends is a beautifully shot and charmingly though practically written cookbook, and a culmination of his life’s work. It draws on his youthful devotion to Elizabeth David, his hustling times in Toronto and evolution as a mainstay of the Canadian artisan food scene on the West Coast. I met with David Wood recently to talk about Cooking For Friends and what led him to write it for the interview below. 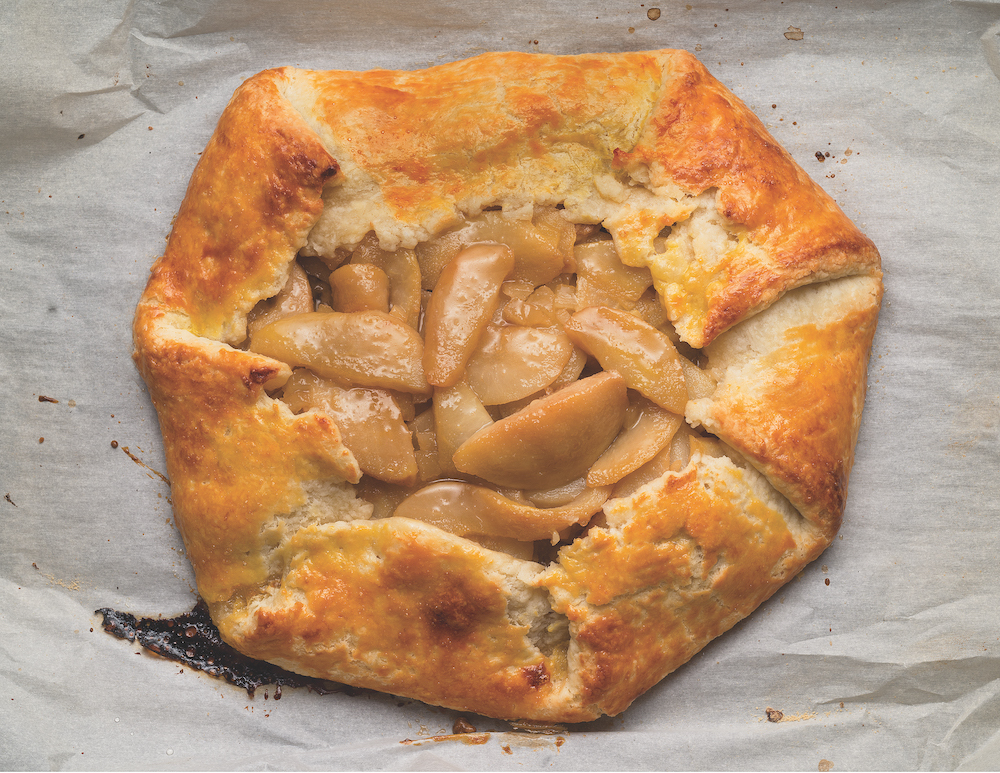 Good Food Revolution: You’ve had a long hiatus since publishing your first two cookbooks, The David Wood Food Book in 1988 and The David Wood Dessert Book in 1989, when you were known for your gourmet shop in Toronto. What got you write Cooking For Friends?

David Wood: At first it was going to be a sort of combination and revamp revamp of the first two books. So, I got to work going through both of the original books, figuring out what was worth keeping and what was not. After not very long, I realized that the world of food has changed so much in 30 years that there’s no way that I can revamp the food philosophy of 1987 to fit how we think about food today. So, I had to go right back to square one. It’s not that there aren’t some recipes from the other books in Cooking For Friends, because there are. But I really had to rethink where I stand on food and what’s important to me about and it’s clearly very different than it was 30 years ago.

David Wood: Thirty years ago, it was all about what was new. Things that today we take absolutely for granted, like triple cream Brie or smoked trout or the California style of cooking à la Chez Panisse. That was all brand new 30 years ago, but today it’s either old hat or just taken for granted. Food, then, was something people were just discovering. The word ‘foodie’ didn’t exist. The food trends came from elsewhere. They certainly didn’t come from Canada. It was like opening a cupboard that was previously full of – I don’t know – Hamburger Helper and suddenly finding avocado pears and triple cream brie and artisan pasta and stuff like that. We certainly weren’t responsible. We were jumping on the band wagon, for sure. We were inspired by the food shops in New York City. It was the leading place in those days with The Silver Palate, Dean & Deluca, the DDL Foodshow by Dino Delaurentiis, and Balducci’s. Those kind of places were even then just sort of peeking their heads above the parapet in New York. We said, well if they can do it in New York, why can’t we do it in Toronto? And the answer, if you want to know, was ‘density’. [Chuckles.] 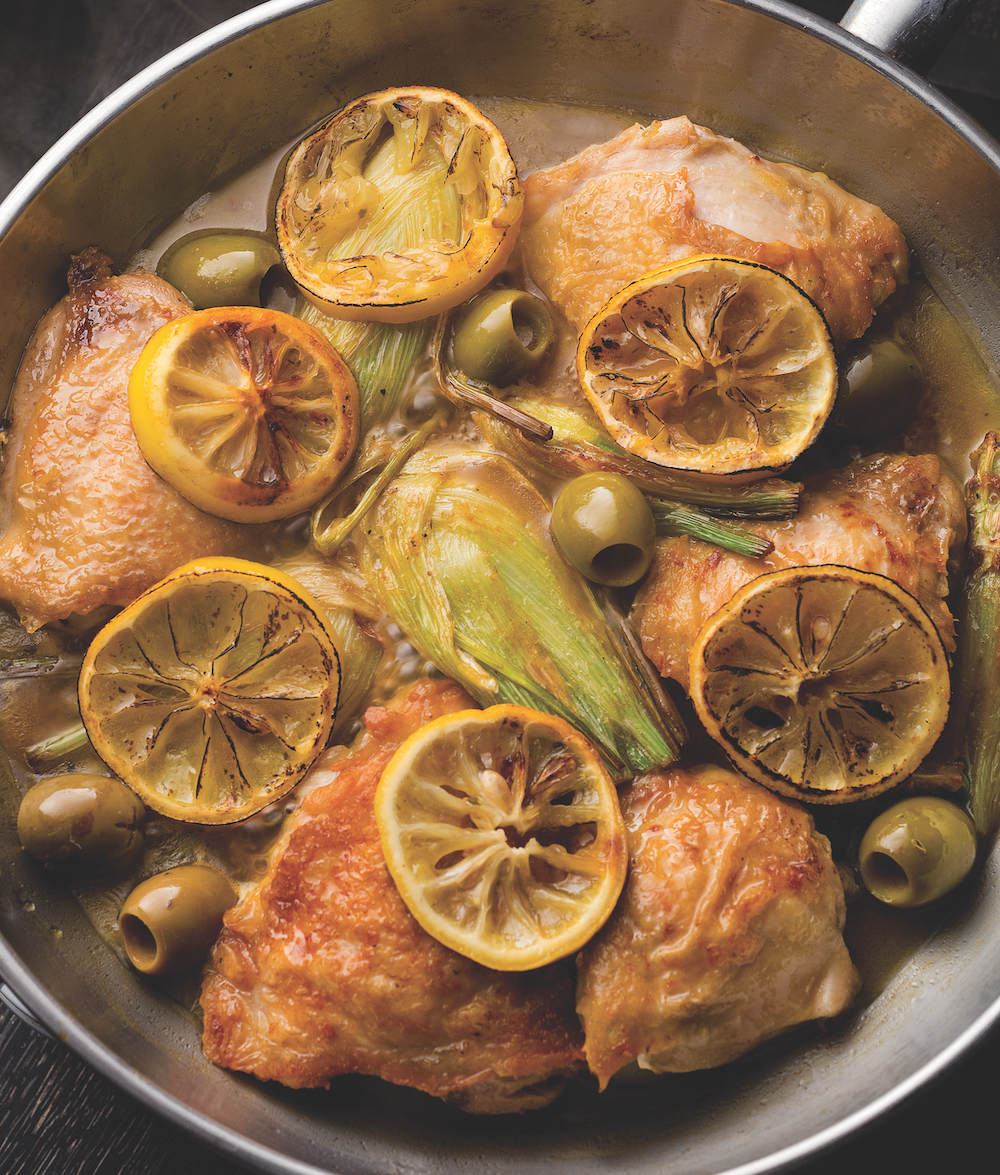 Good Food Revolution: What do you mean?

David Wood: In New York, if you just sold to the people living on top of your shop, you could make a fine living. Here, you needed access and parking. Parking almost killed us at the Summerhill store and it absolutely killed us at the north Yonge store… Back to the food: what we did then was just make good food that wasn’t revolutionary, but to have it available at a counter, where you could come in and buy it at the end of your work day was a new concept. It’s not that deli counters didn’t exit at supermarkets, but the stuff they served was very different from what we were doing. There wasn’t any pure or clean food, and ‘local’ didn’t exist back then either. We just produced good food at what we thought were fair prices. Everybody else thought they were completely outrageous. [Chuckles.] It turns out, of course, that they weren’t nearly outrageous enough!

David Wood: Yes, well that wasn’t entirely the reason we didn’t stay in business. We expanded far too fast, and put our trust in a partner who talked a good line on the business side but actually was not able to deliver. But, that’s all water under the bridge. Anyway, the thrust of the first two books was good food is not that difficult, you can do it and you’ll feel good for discovering the world of food from Europe or California. And, actually, those books have stood the test of time. Not to say they’re still in print, because they are definitely not. But it’s remarkable how many people I come across (usually at the market on Salt Spring Island, where we go and sell cheese every Saturday) who come and say, I’ve got your book and I still use it. For some people The David Wood Food Book has become one of their stand by’s. That’s great. They don’t say that about the dessert book, but… [shrugs and smiles].

Good Food Revolution: OK, but we still need to know about Cooking For Friends. 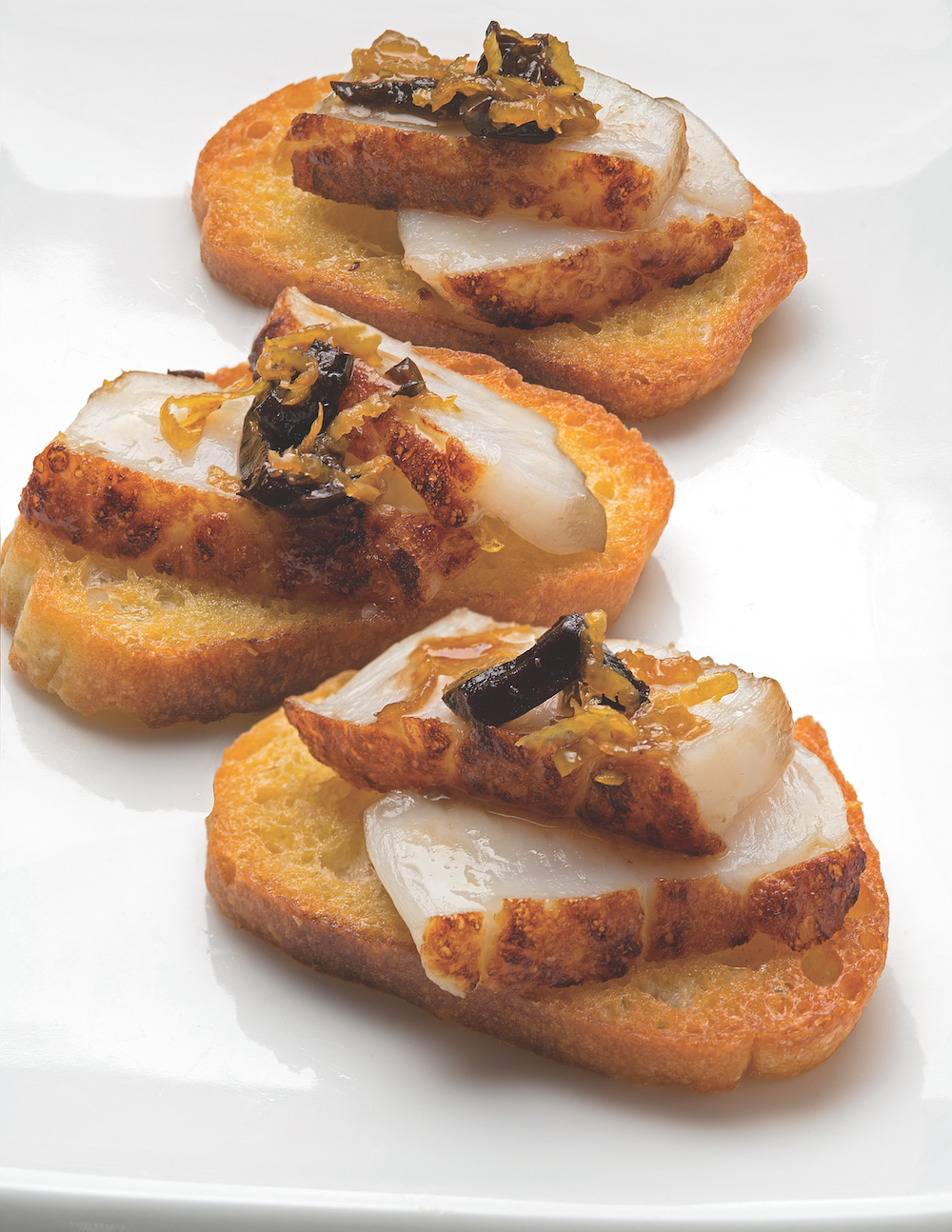 David Wood: With this one, when I realized that combining and revamping the first two was not going to work out because although my thinking isn’t all that different, I have no pretensions of being new, or different, or cutting-edge. It’s not that kind of book. The message of this book is that food is pleasurable both in the making and the eating, and particularly in the eating for most people. It can be simple and doesn’t need to stress you out. The food in Cooking For Friends is probably not what you’ll find in a fine dining restaurant, it’s very much home cooking as opposed to restaurant cooking. You know, it seems to me that we go through stages where restaurant cooking and home cooking are fairly closely aligned, and go through stages where they’re really at opposite ends of the spectrum. Like in the last fifteen years, I think. The cutting edge of food has really gone off on a tangent from most people’s daily experience. That’s not my thing. I know that it’s lots of people’s thing, but not when they cook at home: I’m pretty sure they don’t do all that stuff like foams and essences, immersion and all that at home. And some people don’t home cook at all, they just buy take out and open the containers in their $50,000 kitchens. But most people cook at home and, believe it or not, people still buy cookbooks, apparently. And they tend to use them, so I’m told, when they have friends coming over. They don’t use them for weeknight cooking. They can go online and find whatever they’re looking for; look up chicken and tomatoes and all these recipes will come up.

Good Food Revolution: It think you’re right, and I’m not sure I’ve heard that articulated by any other author. And, of course: if you’re going to have a half a dozen people over on a Saturday night, then you’ll want to put a little bit more effort into what you serve.

David Wood: But really, what you want when you’re having six people over dinner is to have a good time. You want great conversation. You want to have people laughing. You want to have fun. And you want to have good food. But if you think about it, at the end of a good evening, a memorable evening, the food is not the only thing you remember. It may not even be the first thing you remember; it’s probably not. So, what you need is food that will fit into that atmosphere and environment that you want to create. So, that’s what Cooking For Friends is about. The food in it doesn’t stand out. It’s good. It’s not splashy and it’s not knock your socks off. There’s a place for knock your socks off food at home, particularly if you’ve got a bunch of foodie friends and you want to try something new, or different, or you just want to impress them with your skills. And that’s great. But most of the time you just want people to sit down, taste the food and say ‘this is really great’ and go on enjoying it without having to talk about it.

David Wood: Equally important, I think, is the flow of the courses. That has to work and it has to be harmonious and not jarring. You can’t do things that individually would be great but don’t go together. So, although Cooking For Friends is not about entertaining, it’s about food the works for entertaining. That’s what we do when we cook for friends. I do a lot of cooking for myself, and I really enjoy that, but there is a greater pleasure when you’re cooking for other people, particularly if they get what you’re trying to do. You’re trying to put together something that works together as a whole.

Good Food Revolution: Did you choose the recipes from your existing repertoire, or were you developing new ones? 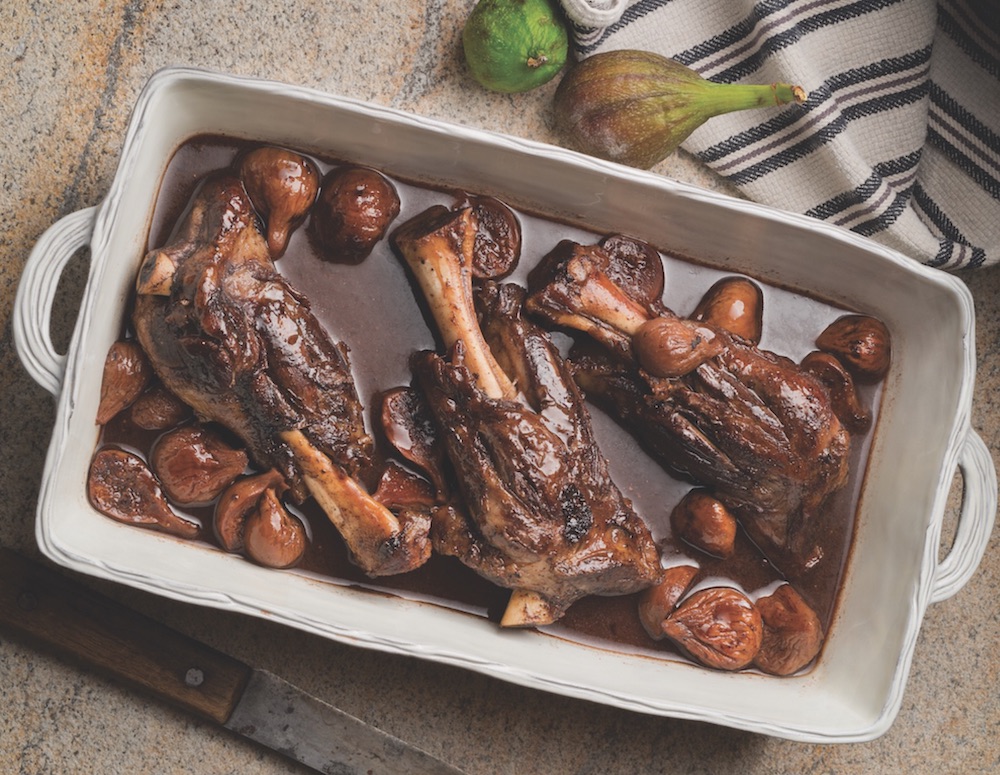 David Wood: Honestly, there’s nothing ‘created’, or very little. They are recipes that taste good, that look good and are simple to do. All of which probably existed in some form or another. For instance, lamb shanks. Every book’s got a lamb shank recipe. Maybe not exactly this combination of things, which is figs, red wine and quince. So, it’s not a revolutionary way to serve lamb shanks. It’s here is a way to serve lamb shanks when you’ve got people coming over for dinner that’s guaranteed to taste good, easy to make, and your friends will enjoy it.

David Wood: It’s a little different. [Picks up book and opens it to random page.] Ah, here: pissaladière. Any French cookbook will have a recipe for pissaladière. So, what I’m trying to do is pull together things from different traditions that work, taste good and look [points to the picture] it’s really pretty.

Good Food Revolution: It is! Who did the photography?

David Wood: I did the styling and my friend Gillean Proctor, who live on Salt Spring Island, did the photography. [Leafs through the book.] Ah, look here: you’ve got pears poached in red wine. I will never do a book without pears poached in red wine. Or here: tarte Tatin. I have made more tartes Tatin than Madame Tatin herself! [Laughs.] So, as I say, I don’t think you’ll find anything in Cooking For Friends that you’ve never heard of before. But you’ll find lots of things that you’ve heard of before and liked, all put together in one place.

Good Food Revolution: And be reminded of them, even,

David Wood: Yes, that’s an interesting point because people look through books for inspiration, don’t they? We need reminding of what’s good and simple out there.