Malcolm Jolley talks to Emma Knight and Hana James about the Greenhouse Cookbook. 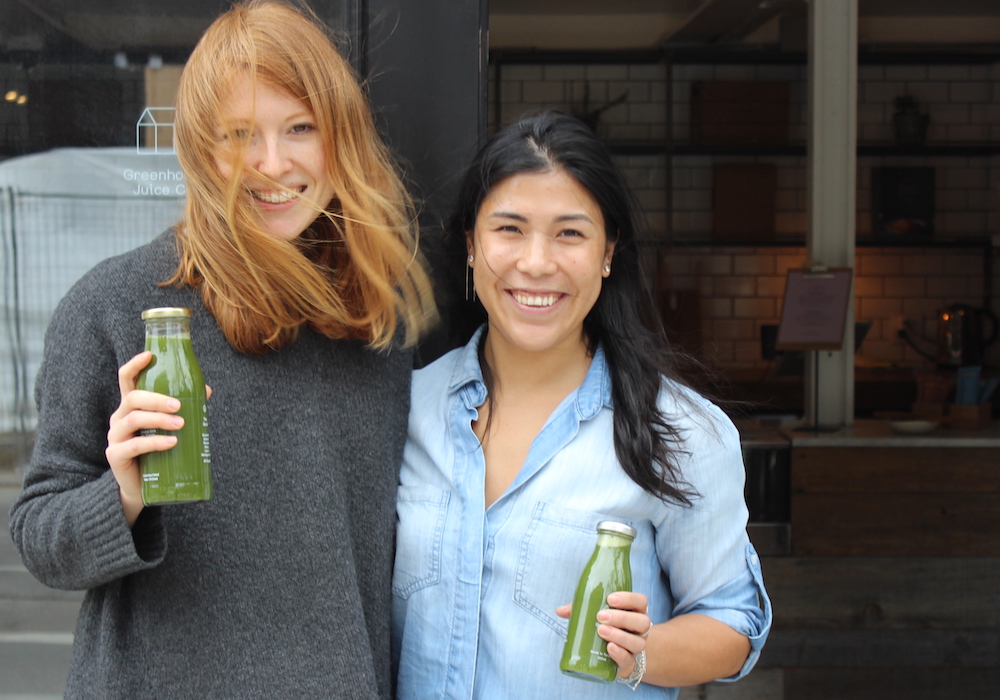 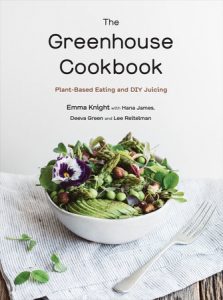 Hana James and Emma Knight are walking advertisements for their very successful food business, Greenhouse Juice Co. When I met them this week on the occasion of the publication of their first cookbook, each lady was glowing with energy and bright-eyed enthusiasm. I was enthusiastic too, I wanted to find out more how this collective of James, Knight, Knight’s life partner Anthony Green, his sister and her partner Deeva Green and Lee Reitelman grew their juice dispensary from the little house we were in on Macpherson Avenue in Summerhill* into 13 locations across Toronto with more, I presume, to come.

Knight claims principal authorship of The Greenhouse Cookbook, which is subtitled ‘Plant-Based Eating and DIY Juicing’, but she is insistent I understand the book, like the company is a group effort. She explains, “We’re a community: nothing at Greenhouse is done by just one person.” She went on to credit in-house nutritionists at Greenhouse, Emily Kreeft and Brooke Lundmark with contributing to the recipes, as well James, her Green-Reitelman family, and her friend the nutritionist and chef Tara Tomulka, founder of Rawcology.

After a few shots of juice and an almond milk based latte, to put me right (I think they did), I sat down with Hana James and Emma Knight and recorded the conversation below.

Good Food Revolution: When I started covering cookbooks ten or more years ago, the big thing was meat: charcuterie, offal and nose to tail butchery, roasts and braises. Now it seems like it’s all vegetables, whether it’s Ottolenghi or diet-based. Where does your plant-and-juice-based book fit into all of this?

Hana James: One thing that I think is different about our book is that it is a plant-based book, for sure, but the recipes are playful and the room for non-vegan additions like cheese or bread. It’s not strict.

Emma Knight: We’re omnivores, and in the same way I don’t think a meat book would be accusatory of vegetables, we’re not saying not to eat meat. We’re like the meat book of vegetable books in that way. This is what we do best, and we like eating more vegetables because it’s good for our health and good for the planet, so this is just about really loving the vegetable. It’s about seeing how creative we can be on the vegetable front. But we say in the book that a recipe would be really good with some pecorino cheese, for example, or grilled haloumi, or we say that a dish would go really well with your favourite grilled fish. Everything is open for embellishment.

GFR: The book is also, of course about juice and juicing. Emma you write in the introduction that you came to juicing relatively late. But Hana, before getting involved in Greenhouse you had a juice business going? 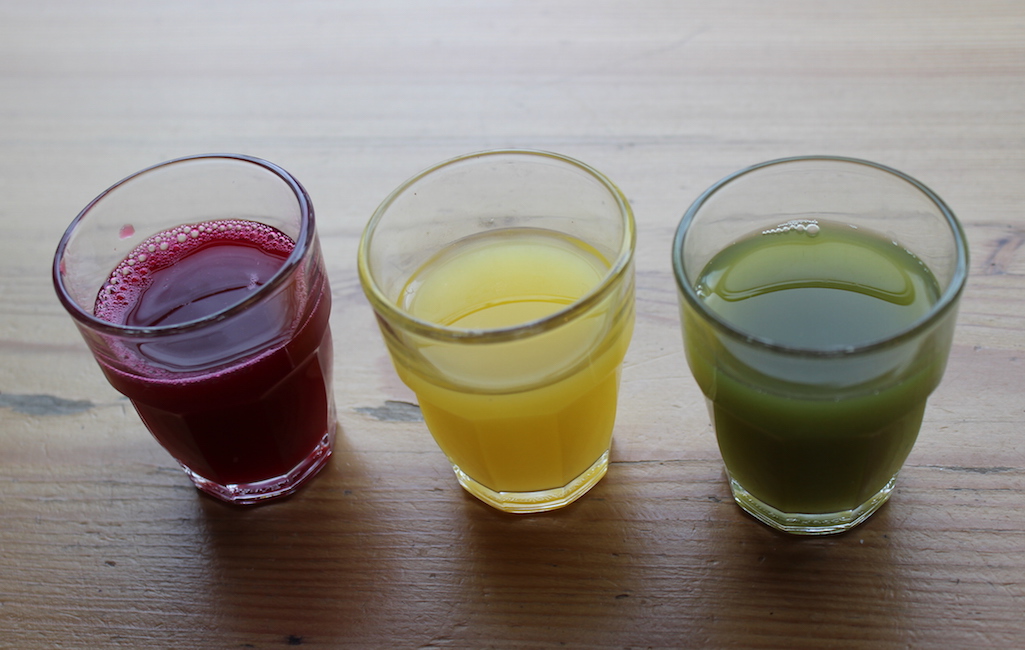 HJ: Yes, but it wasn’t even cold press. But being in that world showed me that Toronto was really ready for juice. Toronto was late to the juice party also, in the grand scheme of the world. But that Toronto really enthusiastic about juice and this quick and easy way to get all your nutrients, enzymes and all those good plant-based things. When we opened Greenhouse people were just so excited.

EK: But we never thought that three years in we’d have 13 stores. Not in a million years. We thought we were going to open the cutest, highest quality, most welcoming, and nutrient dense juice shop in the world, in our hometown of Toronto, in this location in a little house that inspired our name and our logo. We thought it was going to be a one-off.

EK: Yes, and fun! We were all in, and we were all about the quality: this was going to be the best juice you ever tried. But we really thought it would be one shop.

GFR: So, why did you grow so quickly?

EK: The reason we’ve scaled like this is that the demand was there. It was the last thing we expected.  We thought, it’s a cold country and we’re opening in January. Nobody’s going to come except friends and family. We thought that ideally there would be a niche market for our juice because anything done with a huge amount of love will find a niche market, if you’re lucky and have good timing. But we weren’t expecting to see more than that. So we were pleasantly surprised!

GFR: So, what happened?

EK: We quickly realized two things: 1) we weren’t meeting the demand, and 2) we needed to make a lot more juice and keep the standards high, which meant buying a lot more organic produce and doing things a lot more efficiently. And our goal has always been to reduce the price point, which we’ve done in a few cases already. Our almond milk has come down and our most intense green juice has come down. But we want to bring all of our prices down.

GFR: Wait a minute. You’ve actually lowered your prices since your success? What? Why would you do that?

EK: For the same reason we’ve given away all of our recipes. We want people to be able to access our juice as often as possible. We want it to be something that is in reach to the majority of Canadians, not just a small handful of them. 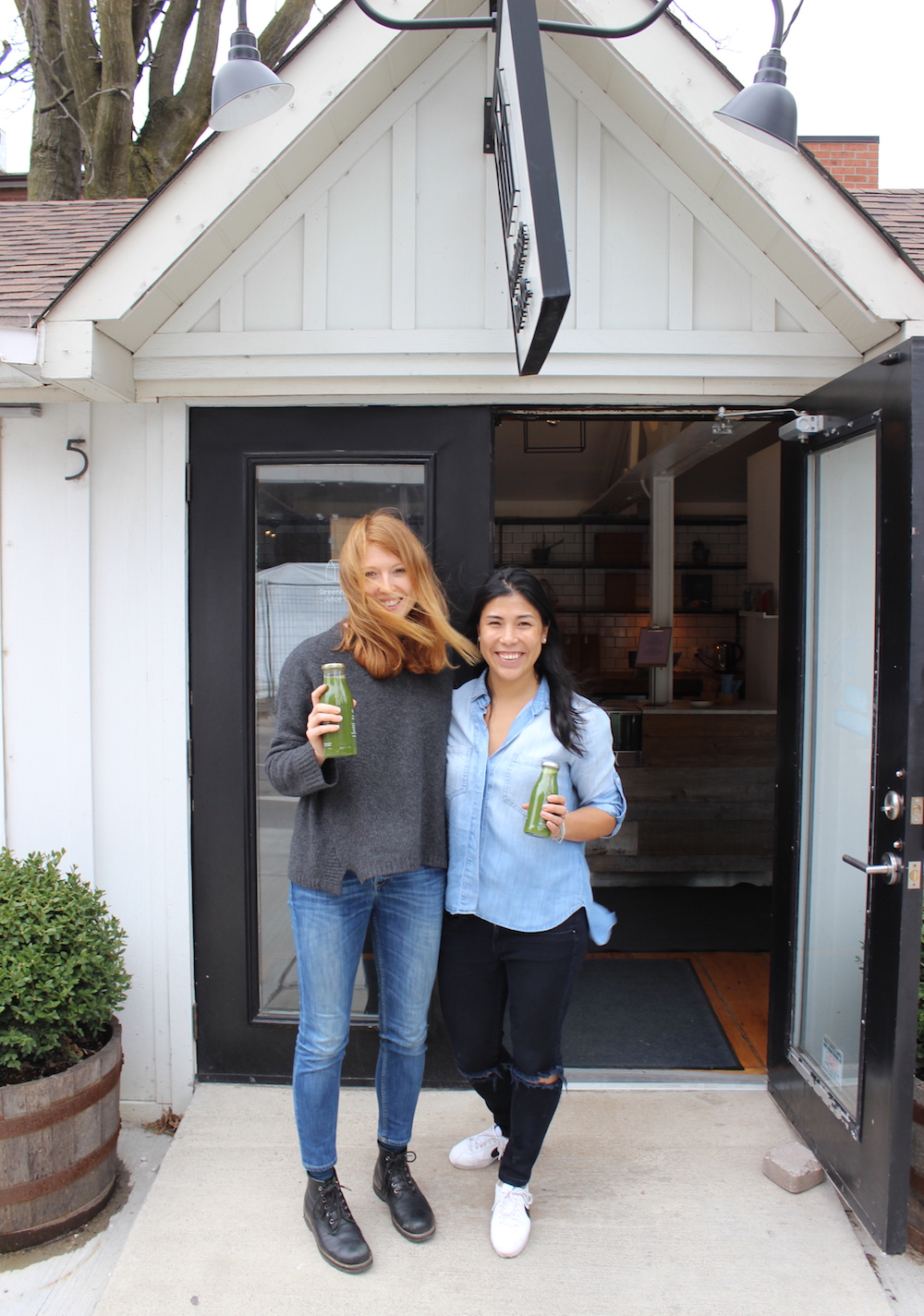 HJ: The reason we fell in love with juice was because we drank it and it felt so good. It had this incredible impact on our lives. So, anything we can do to spread that juice love, and have everybody experience, it ultimately what we want to do. It’s so amazing to see the difference in people.

EK: I hope you can see that the store is about being welcoming and not about being snobbish or smug about nutrients. I know I have experienced the smug health food vibe, where you walk into a shop an wonder, am I healthy enough for this place? We’ve always wanted Greenhouse to be the opposite of that. There’s a market that’s already being catered to with juice and home juicing. So, Greenhouse is not just about reaching people who are already super aware. It’s more about making it fun and engaging, unintimidating, approachable for people think that it’s not for them, but who stand to gain a lot.

GFR: So, you’re creating a market, as well as servicing an existing one?

EK: I hope so! There’s a lot of curiosity, or a lot of people who are willing to dip their toe in, anyway.

HJ: In the first year, we opened our doors and started to attract people from Parkdale, Ajax, Aurora. This was purely from our social media, it was all grass roots and word of mouth. We had people visiting from everywhere, which was very encouraging and exciting for us. We would explain abut the cold press process, and why it was different from making juice at home, and we would see people’s eyes light up. So, it’s really about the tasting and the experience. Once you see these beautiful vibrant colours and taste it in your mouth, you’re kind of already sold.

GFR: There doesn’t seem to be anything really weird about your juices.

EK: No, and that’s kind of surprising for a lot of people. Try before you buy is a big part of what we do. That’s part of our claim of being, hopefully, a little more approachable than other health food places. We don’t want to swindle you into buying an $11 bottle of juice that’s not going to be for you because you hate kale, or ginger is not your thing. Our hope is that everyone will try as many of the juices as they can and that they’ll be really aware of what they’re taking home taste-wise. And, of course Hana or any of our staff can take you through all the nutritional benefits.

GFR: So is ‘cold press’ like with olive oil, where you don’t want to heat up what you’re juicing?

HJ: Exactly. You’re preserving the integrity of the nutrients, so the juice is alive. You can really see the difference in the colours and taste the vibrancy of flavours.

GFR: Then I guess the product doesn’t last as long as supermarket juice?

HJ: People think you have to drink your juice as soon as it comes out of the machine. That is definitely the case with at-home centrifuge, masticating or blending types of juicers. But with cold press juice, because it minimizes heat and oxidization, you get a little bit of a shelf life. Nothing crazy, but it will last a bit longer.

GFR: What is the press? Is it like a giant screw press that slowly bears down on the fruit?

GFR: It sounds like James Bond torture machine that slowly comes together?

HJ: Totally. Never get you hand caught in there!

EK: SMERSH has asked to borrow it when they need to.

GFR: Nice. How did you collect the recipes in the book? 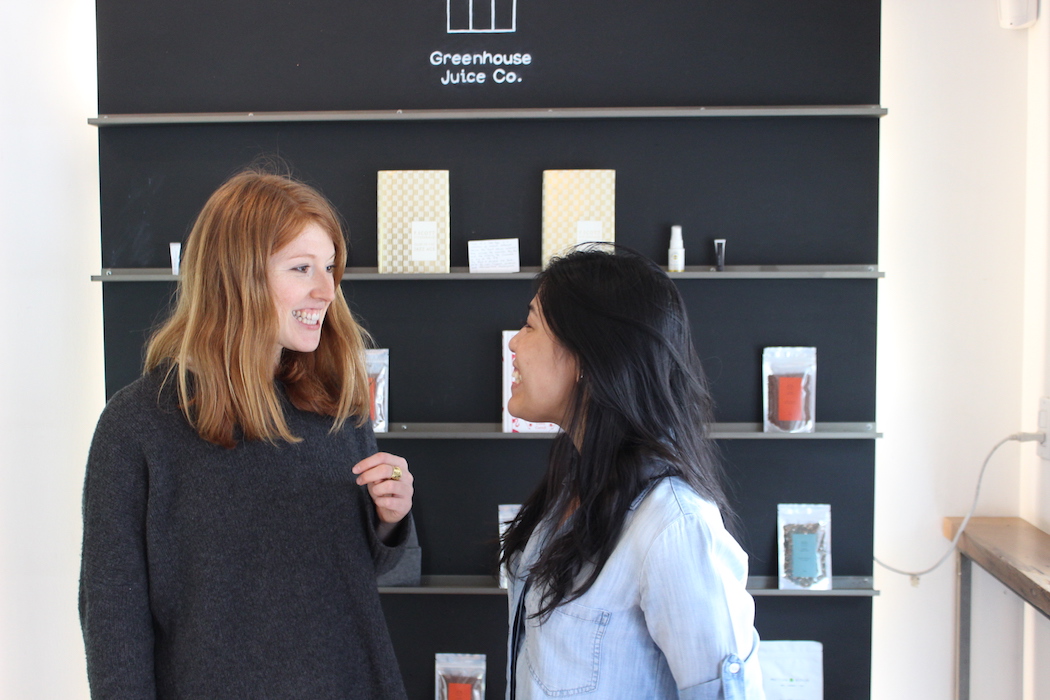 EK: The recipes came from our blog. Or, I should say the idea of a book that contained recipes came from our blog. We never paid for any kind of advertising since our launch in 2014. Frankly, we haven’t had the budget. But also, we’ve been lucky that there’s been a word of mouth thing. My background is in journalism and Hana’s is in making amazing food as well as juice and we have other team members who love to cook. So, we think the most valuable kind of marketing, if you can call it that, is writing: content. We hope we can create useful information that we can put out on the internet for free that people can apply at home, like recipes that use our almond milk, for example, in baking or in smoothies. Or, salads that use one of our juices in a vinaigrette. Or, a dish that uses a ginger shot to give it some extra spice. All of that’s been part of our social media and blog content for a really long time. Although for the book, we didn’t end up using any of the recipes that have been on the blog already because we wanted to provide fresh content.

GFR: So, don’t try going to the blog instead of buying the book!

EK: [Laughs.] No: do go to the blog! I will see you there. Hang out with me on the blog! It’s ok, the book and the blog are different.

HJ: We’re a juice company, but we’ve always been about being beyond the juice and being about the lifestyle that comes with the juice. So, it’s about having a green juice this afternoon and then going to have a steak for dinner and not having to choose between salad and fries. I’m going with the fries! Everyone who’s involved in Greenhouse has a lifestyle where they’re eating and enjoying life, enjoying themselves.

EK: Food is social. At the beginning pole would come into this place and ask if the juice was meant to replace a meal. We’d say, ‘No, please eat lunch!’. For some people it’s totally satiating, and you’re definitely getting a lot of nourishment from it. But it’s not a replacement. No! Food rocks. So, having food in our book is about saying let’s eat together. If we could have a restaurant, we certainly would, but we just have our hands full with juice right now.

*Macpherson Avenue is not in ‘Rosedale’ as is often erroneously (and for me annoyingly) reported. Anything west of Yonge Street is not Rosedale, it’s Summerhill until after the park when it becomes Yorkville.