In Fact, don’t even TOUCH mushrooms that you aren’t 100% sure of.

All edible fungi MUST be cooked before ingestion.

For over a decade or so I have observed that with each passing day as a culture we are becoming less and less attached to the earth that supports us, and indeed it was co-founder Malcolm Jolley’s and my own mutual concerns about this that led to the founding of Good Food Revolution way back in 2009.

Running in parallel to my new found interest (read: midlife crisis) came a related passion for self-sufficiency that upon occasion flirted with the concept of survivalism. Being a voracious information sponge, I gorged upon mountains of books and websites, and in my deep-dives I read over and over again that if the world did really fall apart and one had to live off the land, it wouldn’t be big game that one would be surviving upon, it would be the smaller critters: rabbit, hare, squirrel… and in the case of one piece, the lowly frog.

Last year we looked at my first foray into the world of foraging for wild mushrooms with the Chicken Of The Woods, how I seriously poisoned myself touching the Destroying Angel/Death Angel/Fool’s Mushroom (Amanita bisporigera), and how I had some success harvesting and cooking the more commonly spotted Dryad’s Saddle.

All of these experiences were really a revelation for me, so much so that I had ordered some Chicken Of The Woods spore plugs to insert into fallen trees around our property, looking to spend the next few years with a reliable harvest. They were a complete bust, and didn’t produce anything. 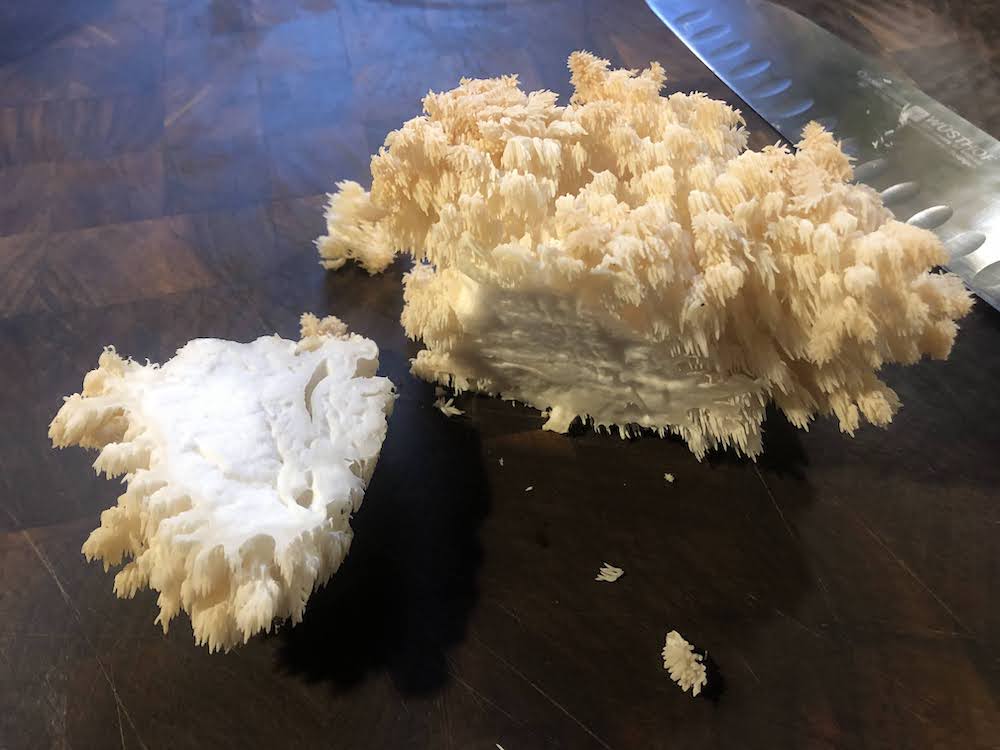 I was hiking along the Bruce Trail, just west of Kimberley, when we can across one of the most astonishingly beautiful mushrooms I have ever seen. I used my mushroom identification app and texted a pic to my old friend (and mushroom expert) Mr. Anton Potvin, and the results came back in an extremely positive fashion.

Although it’s certainly a lesser-spotted fungi, it is highly sought-after and regarded up there with the best of the so-called “gourmet” mushrooms. Excellent!

The example that we came across was actually a Hericium coralloides or Coral Tooth mushroom, but basically the same rules apply to all members of the Hericium family, and they all look reasonably similar, Lion’s Mane/Santa’s Beard,  Bear’s Head Tooth, and the like.

All of the Hericium family mushrooms are saprophytic fungi that rot dead wood on living and dead trees (oaks, maples, beeches, sycamores, and occasionally conifers). Normally spotted late summer/early fall, they are often found up a little higher up on trees, so you may require a ladder to harvest them, but occasionally you’ll discover them on fallen trees or cut logs closer to ground level. Personally, I’m not sure if I’m really dedicated enough to go carrying a ladder around on my foraging adventures; luckily our find the other day was located on a felled tree. 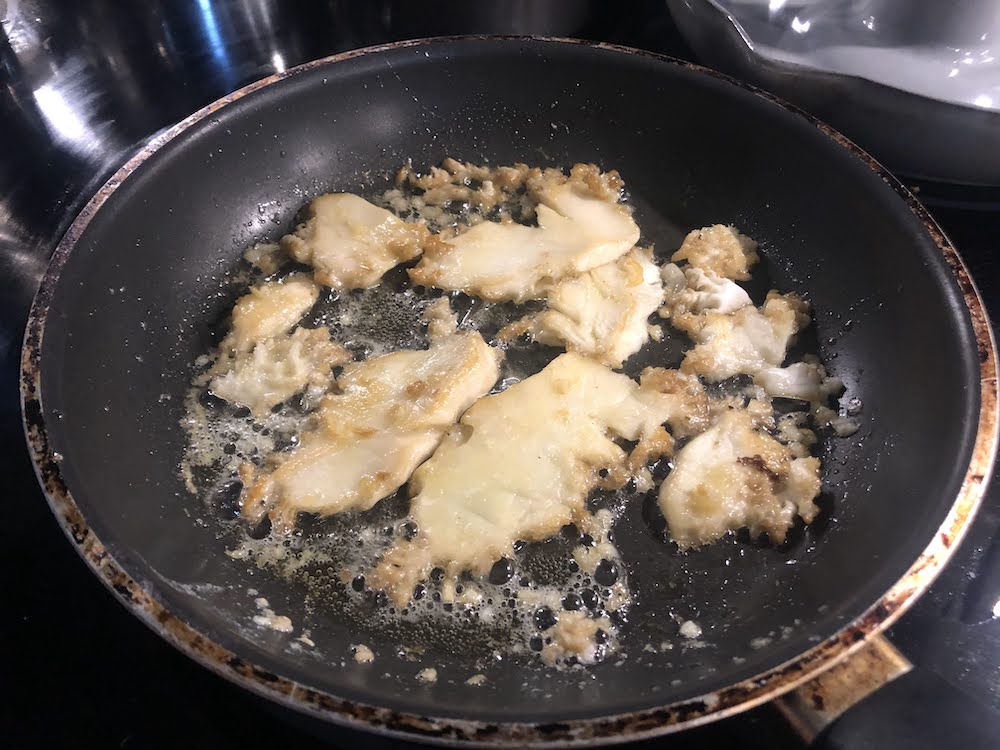 The fruiting body, sized from as small as a fist to as big as “a small sheep”, can be 8 – 20 cm across, consisting of branches arising from a more or less central core that is attached to the wood. The branches are usually 0.5 – 1 cm thick, smooth, and adorned with fleshy spines. The spines are 0.5 – 1 cm long, and up to 1 mm wide, appearing white when fresh, becoming faintly yellowish to brownish (or pinkish) in older age.

As for inedible/poisonous lookalikes, you are reasonably safe here. There are a number of coral mushrooms that it would be best not to eat, but the edible ones are pretty easy to identify as the spines always hang downwards from the branching structure, even more so in the related  Hericium americanum or Bear’s Head Tooth and the Hericium erinaceus or Lion’s Mane/Santa’s Beard, which, in a way, look more like furry icicles than coral.

When one cuts into the flesh it remains white, not changing when sliced.

Something I found quite interesting about these mushrooms is that one can wring water out of them in the same fashion that one would a wet towel, and then the Coral Tooth springs back into almost the same form it was in before this action. Quite remarkable, and I found this to be a helpful step in the identification process as it’s something you should really do before cooking anyway if you’d like a bit of crispiness on your cooked mushrooms..

Regarding the adaptogenic qualities (Chinese medicine has prized them for centuries), I always take such claims with a seriously generous pinch of salt, but according to fôrij.co, these mushrooms have the following health benefits:

As is par for the course in our household, my wife won’t let me feed anybody anything I find whilst foraging unless I try a little the night before; if I don’t suffer from some ghastly poisoning or the dreaded “gastric distress” over the following 24 hours, then I have carte blanche to serve it up the following evening. Thankfully it caused me no harm whatsoever, and the family heartily devoured a plate of these woodland treasures with considerable gusto.

Perhaps one of the most fascinating aspects of this wild mushroom is the way in which it both looks and tastes like seafood, namely white crab and/or lobster. Both visually and texturally it does a superb job standing in for both of these.

As for preparation, I tend to stick with the tried and tested for such things: a good sauté with butter/olive oil, a bit of garlic, then salt and pepper with a little parsley.

Apparently many foragers hand shred it and then use it as a replacement for crab meat, in crab cakes and the like (with some remoulade on the side, please). 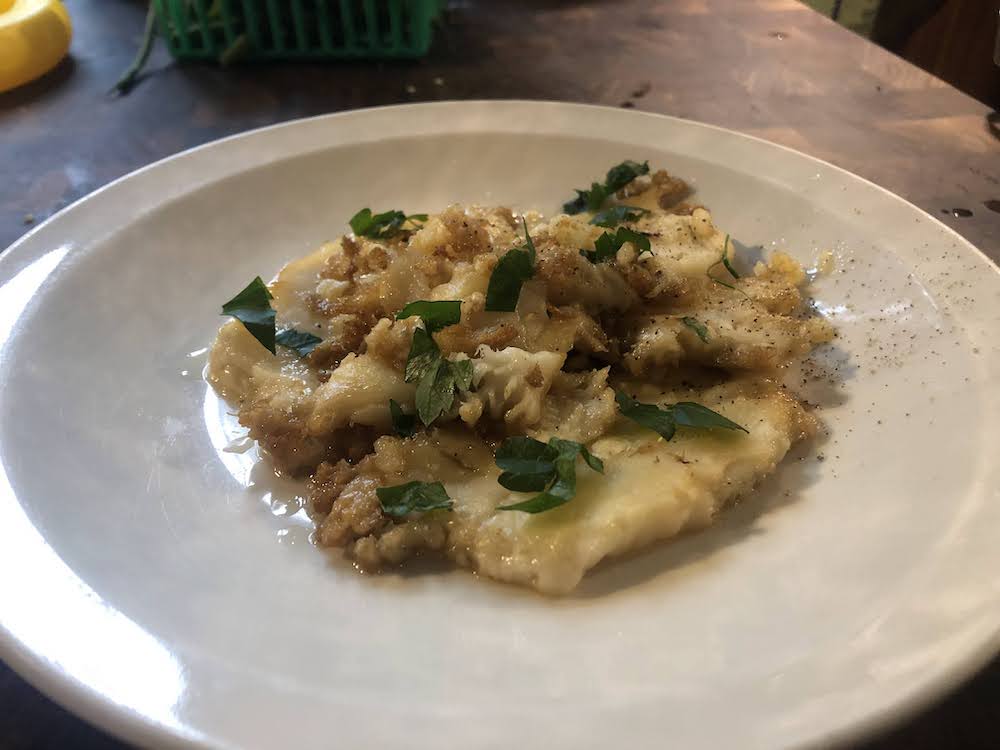 It appears that I have found my new favourite wild mushroom, and sticking to the old forager’s adage of only learning about one new mushroom every 12 months, I think I’m going to apply all of my fungi study to this absolutely gorgeous looking (not to mention tasting) thing for the next year.

Also, on a similar note, I highly recommend Frank Hyman’s How To Forage For Mushrooms Without Dying (Storey), probably the most amusing (but also deadly serious) read upon the topic of wild mushrooms. 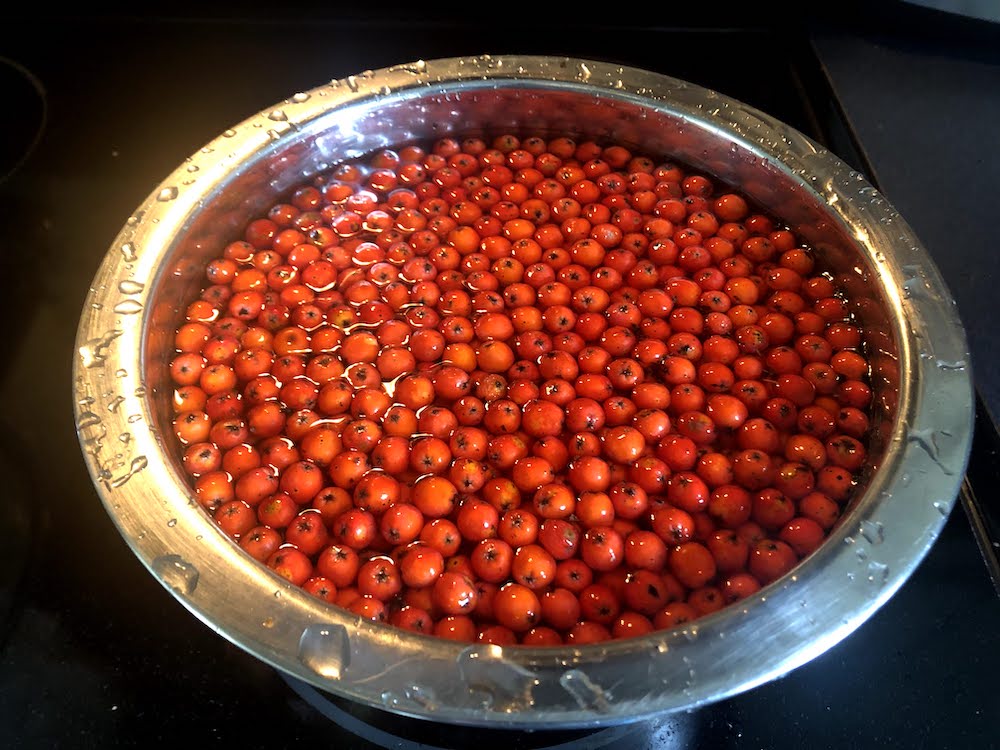 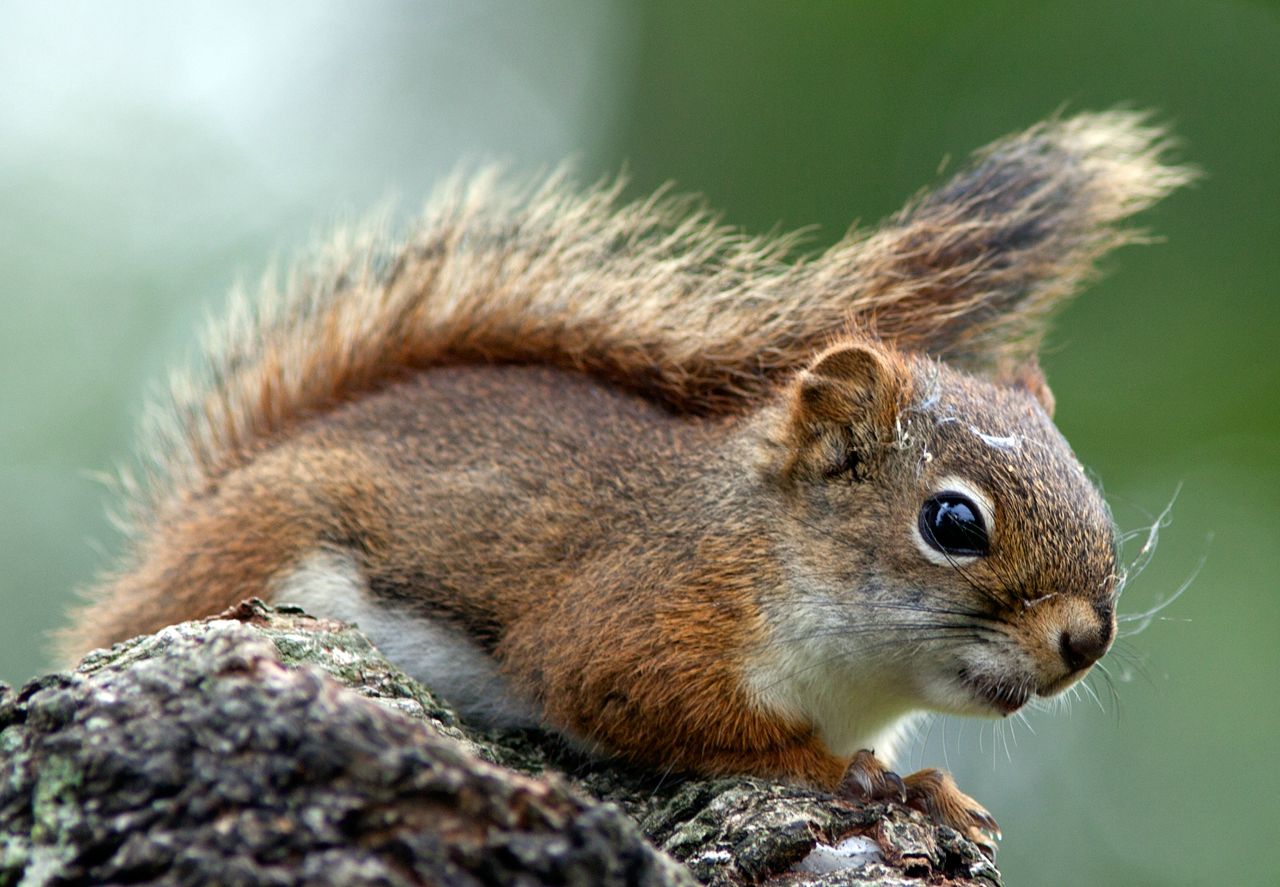 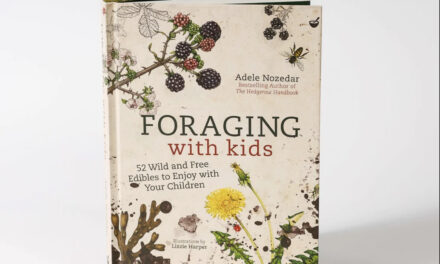 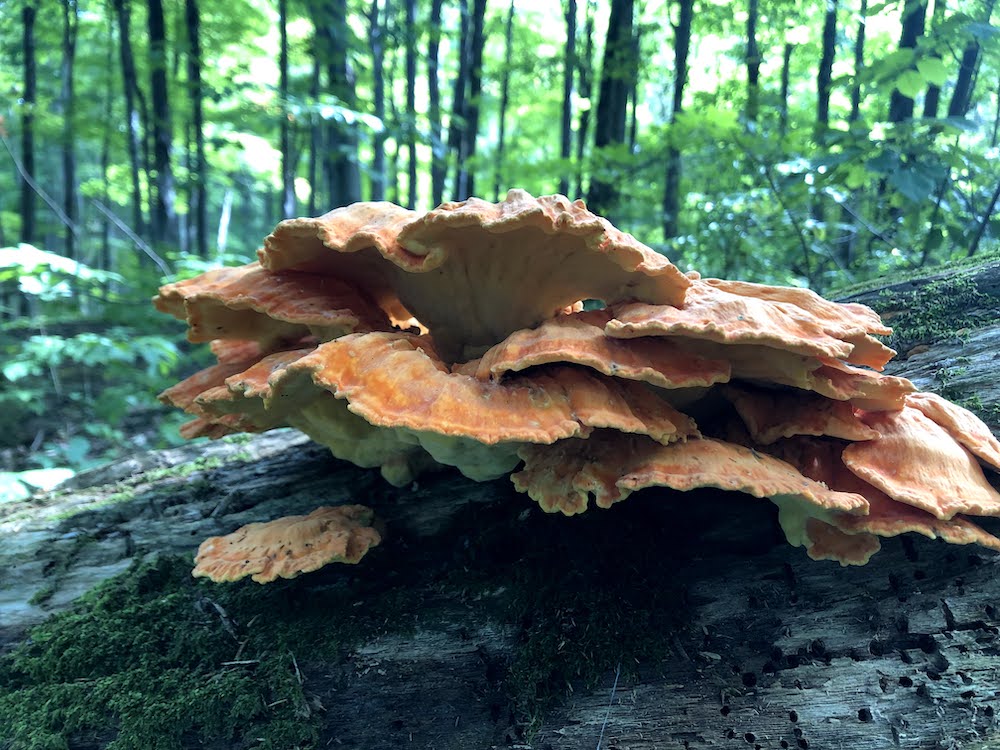 How To Eat In The Wild Part 4 : Chicken Of The Woods Mushrooms