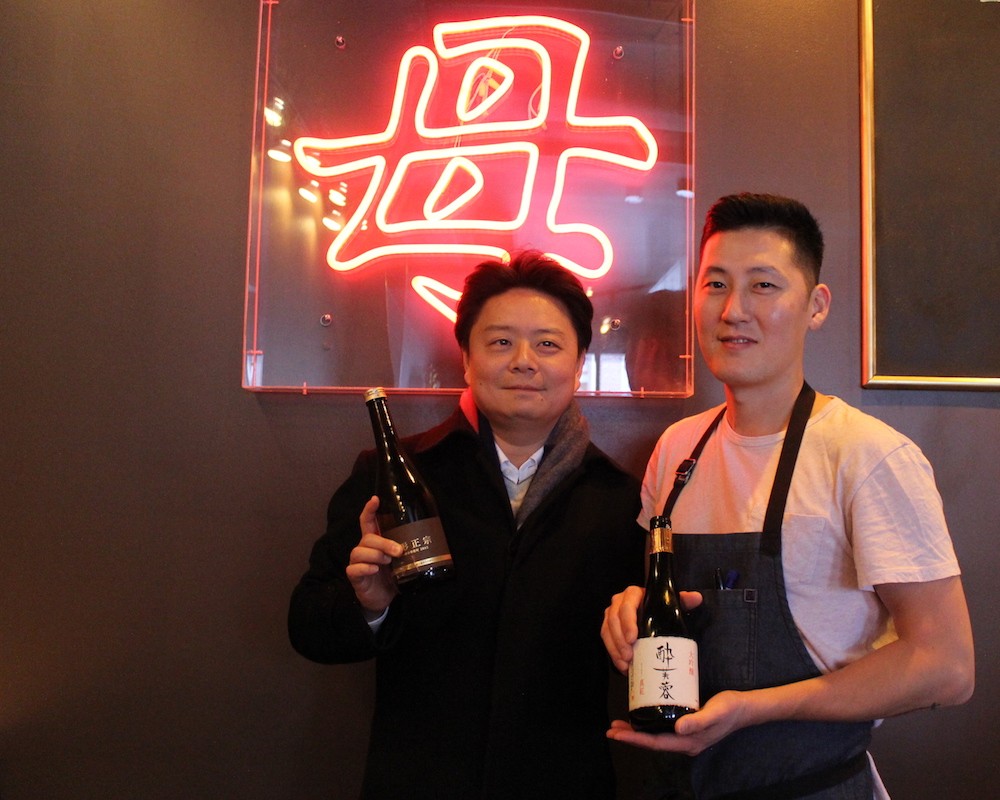 Mariko Tajiri is a sommelier and the National Brand Manager for That’s Life, a drinks company that business in several provinces that she calls a “boutique sake and wine agency”.  She is as charming as she is knowledgeable (very) of sake and wine (see Jamie’s Young Blood Sommelier profile of her here). Mariko sells fancy sake, and as such has her ear to the ground on the Asian restaurant scene in Vancouver and Toronto, so when I get an invitation from her for lunch at a new restaurant with a visiting sake maker, I will do everything in my power to make sure that I can accept. I know that lunch is going to be good, in good company, and I am going to learn a lot.

A confession: in a sense it’s not hard for me to learn a lot about sake at lunch, because I know very little and my learning curve is steep. While a fifteen year career covering the wine trade has given me a fairly solid foundation in the ways of the grape, my understanding of the ways of grain of rice remains very basic. Maybe worse than basic. It’s really just a question of exposure, so even though Mariko has introduced me to a number of great sake brewmasters, like Tomonubo Mitobe, who heads his family’s more than century old brewery in the Yamagata prefecture, north of Tokyo. The knowledge hasn’t stuck and my brain still struggles to process what’s on my palate. This does not, thankfully, keep me from enjoying what’s in my glass… although that might also be an impairment to learning more about sake too.

Mr. Mitobe and two of his artisan crafted sakes were the stars of one of Mariko’s lunches, held in the middle of the crazy holiday season, late last year. We dined and conversed with chef and co-owner Edward Bang at the relatively newly opened Omai. Bang worked his way through Toronto kitchens, including Patria and Canoe, before embarking to New York to work at Eleven Madison Park. On his return to Toronto, Bang and Jason Ching (who was behind the phonemon known as WonderPho) opened Omai in a small store front at the beginning of the Baldwin restaurant strip west of McCaul. The focus of Omai is the bar, where Bang makes innovative and delicious hand rolls and small plates of tasty Japanesy things like a tamago with truffles, or fingerling potatoes with house bacon and cod roe mayo.

As we furiously passed bowls of plates of Mr. Bang’s food, Mr. Mitobe told me a bit about himself, his family’s brewery and the way they do things at it. Mitobe sake is made, to use a wine term, in a relatively non-interventionist way using local using rice, in much the same was way as it it did when it was founded in 1898. One of the greatest improvements Mr. Mitobe thinks he has made in the decade in a half since taking over the family firm is to convince the top growers in the area to sell to him. He took their willingness to sell to him, after 14 years of trying, as a high compliment. He explained, “It’s like how only the best sushi restaurants can get the best fish.” One ingredient in the Mitobe sake line, which has never, nor will ever change, Mitobe also explained was the water, which is famous in Yamagata Prefecture for being particularly hard and full of minerals.

Tomonobu Mitobe introduced two of his family’s brewery’s labels that afternoon. The first was the Mitobe Junmai Ginjo Akaiwa Omachi ($88.92 for a 720ml bottle). Jumai means there is no alcohol added, and this sake, ‘The Sword of Yamagata’ is made with polished down to 50% of the original rice grain to give it a silky smoothness. Sake is not dated by vintage, but by when it was put in the bottle, as brewers may blend from different harvests. The Sword I tasted was from 2012. I am struggling with interpreting what I taste when I taste sake, and feel like there is often a pleasant bitter note to balance some fruitier and creamy notes, the way acidity will do in wine. That’s what happened here, with a very pleasant green melon note with maybe a citrus pith finish. We tasted it first and Chef Bang sent out some of his pickles to go with it, that worked really well.

The second sake we tried was the ‘Junmai Daiginjo Suifuyo Shinku‘ ($119.56 for a 720ml bottle). The sake’s name is translated, Mr. Mitobe told me, to mean ‘drunken lotus’, and refers to a local water flower that goes red in the afternoon, as though it had been drinking. I believe it’s really meant as an allusion to the flushed cheeks of a young woman who has been drinking fine sake. The rice polish on the Red Lotus is down to just 35%, and it makes for a very gentle and elegant drink. Bottled in 2014, the Red Lotus I tried was made with rice from 2013, which produced a particularly good harvest. Mr. Mitobe was jokingly modest about how fine the sake turned out. He chuckled as he said, “Every ten years I think I am a genius, and 2014 was one of those years.” Made with an old fashioned ‘boat press’, the Red Lotus was complex. It began with an aromatic, almost coniferous quality that rounded out into soft fruits and lingered long on the palate. A characteristic of both sakes, that I noted, after trying them with several of Edward Bang’s dishes was their ability to kind float on top of what was being served.

So, maybe I retained a few things I learned after all. (Looking forward to the next lesson.)