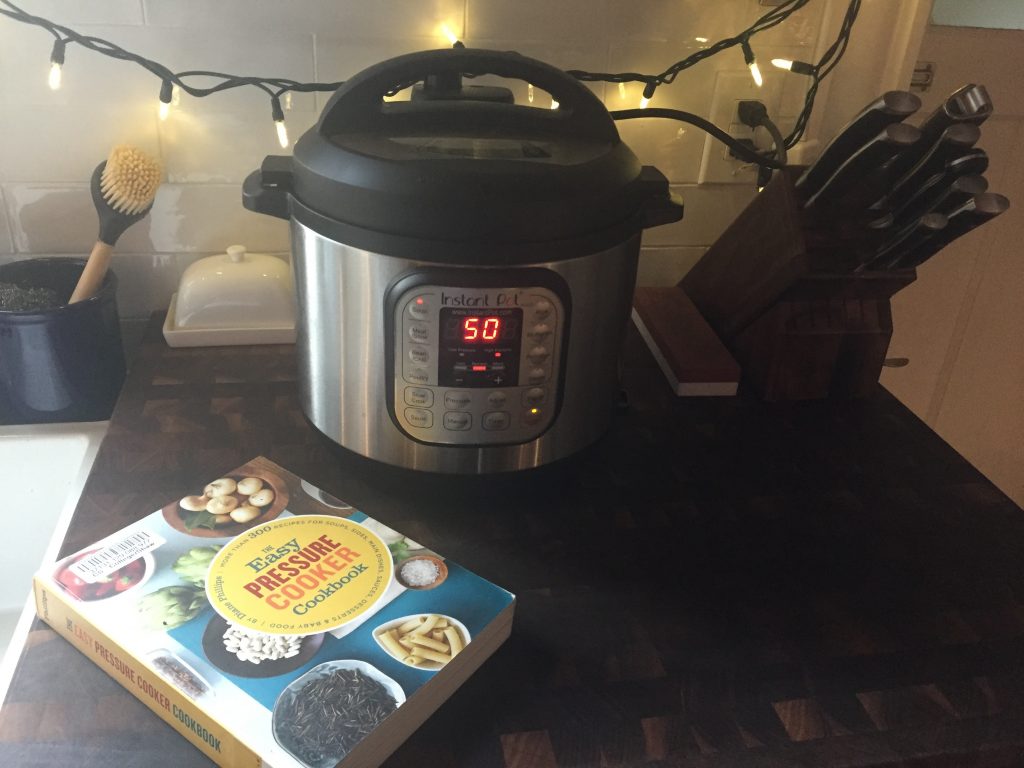 The Instant Pot : Now a permanent fixture in my kitchen.

I had been flip-flopping on purchasing a pressure cooker for much of 2016, but had been driven to extreme procrastination through troubling flashbacks to the almost Lovecraftian culinary horrors that my Mother can utilised hers to summon back in the 70s and early 80s. I also have fuzzy memories of an explosion at some point, and our kitchen being completely covered in molten pea and ham soup. It was Mini Kievs for dinner that night.

Indeed, when I mention the words “pressure” and “cooker” together to my Chef friends, 90% of them reply with words along the lines of “terrified”, “intimidated”, and/or “explosion”. It appears that many a usually fearless Chef is frightened by the prospect of a pressure cooker encounter.

It took an extremely hungover Autumnal morning in a friend’s Edinburgh kitchen in order for me to take the next step towards Instant Pot nirvana.

I was nursing the wounds of the previous night with a nice cup of tea in his kitchen when I spied his Instant Pot.

“What’s this thing here? Is that a pressure cooker?” I asked.

“Ah, that’s my Instant Pot. I use it almost every day. You can make almost anything in it. I use it for soups mostly… and stocks… you can do a stock in around 45 minutes”

And that was it.

Perhaps it was the Caledonian 80 Shilling still pounding through my cardiovascular system, but I immediately opened up my Ebay app and hit the BUY IT NOW button.

Two weeks later when I arrived back in Toronto there was a large package sitting on the dining room table. Having completely forgotten about my impulse purchase, when I open the box I was overjoyed.

And that was me right down the Instant Pot rabbit hole.

Getting used to the Instant Pot and its eccentricities takes a little while, as it’s not entirely intuitive, and despite the fact that it bills itself as an (almost) do-it-all wonder, it certainly does some things better than others.

To be honest, I don’t think that the enclosed recipe book (2nd edition) does the unit any favours. My first foray into pressure cooking was with the Beef Roast with Potatoes and Carrots One Pot Meal from this thin pamphlet, and it was an unmitigated disaster. The beef was nasty, tough and dry, the vegetables absolute mush. The family were most disappointed, and I was worried that I had thrown away a couple of hundred dollars on a useless gadget. But I decided to persevere…

I was directed to the website Hip Pressure Cooking (terrible name, but some great recipes and tips) and went to the library to pick up Diane Phillips’ Easy Pressure Cooker Cookbook. With these two resources at my disposal I was primed to join the cult of the Instant Pot.

After having the Instant Pot for three months, I have say that I am pretty impressed. I use it a couple of times every week to make stews, soups, legumes, eggs, chillies, and stocks. I think that it is in these areas that it really excels. For the record, I’ve still to try out the yogurt and rice functions.

Making stock is one of my favourite things to do in the kitchen, and with the Instant Pot, a few chicken carcasses, and some vegetable scraps one can rattle off a beautifully clear chicken stock in 45 minute. Well, it’s never quite 45 minutes as the unit has to come up to pressure first, and then after the cooking time elapses one has to depressurise the thing (natural or forced release). So let’s say an hour for a delicious chicken stock. And the best thing is that once one has added the ingredients and programmed the Instant Pot, one can bugger off and do other things whilst the cooker does everything independently of human interaction, with none of your usual manual bring-to-boil-then-reduce-to-simmer action required. The same goes for soups, that are made in around the same time.

The sauté function comes in really handy for softening vegetables and browning meats before cooking without the need for another pot. One can also use the sauté function to reduce the liquidity of the contents after cooking is completed.

I’ve always promised to include more beans, lentils, and peas in my family’s diet, and it is in cooking these that the Instant Pot really shines. Castelluccio Lentils in around 15 minutes? Yes please. If you don’t have time to pre-soak dried beans or peas then one can simply double the cooking time at pressure and use the natural pressure release method for superb results.

A friend reminded me of the included steaming rack, and explained that one could make perfectly cooked soft or hard “boiled” eggs in six and 12 minutes respectively. It took me around two weeks to actually find said steaming rack as I had squirrelled it away somewhere “safe” when I first opened the packaging, but after using it to place a half dozen eggs in the Instant Pot the results were tremendous. After a brief cold water bath they peeled like a dream. I’d recommend the steam function over the pressure cooking here though, as with the latter one again has to wait for it to come to pressure before the cooking time begins.

It’s also bloody amazing for tenderising chicken gizzards, but that’s a story for another post.

Where I find the Instant Pot falls a little flat is pressure cooking vegetables. Every time I have cooked vegetables at pressure (outside of soups and stews) the results have been overcooked and mushy. I still enjoy a bit of bite to my vegetables, and so I’ll probably stick to steaming or sautéing on the stovetop.

I did attempt a whole chicken in my Instant Pot but found the results quite disappointing. I happen to have a thing for crispy skin and so in the future I’ll be using the oven for that. In fact don’t ever expect anything crispy to come from your Instant Pot. It’s a texture that it simply doesn’t do.

Now, the question remains… is it safe? And do my tough Chef pals have a right to be scared?

Well, as soon as the unit comes to pressure the lid locks firmly in place, and so theoretically one couldn’t open the thing whilst it was full of superheated molten pea and ham soup. With the internal electronic thermostat monitoring the temperature at all times during operation, unlike the old stovetop versions there appears to be no chance of any explosions happening, and scouring the interwebs I can find no stories pertaining to such an experience with the Instant Pot anywhere.

My only words of advice regarding safety would be:

The Instant Pot is an extremely versatile little gadget that would be particularly useful for someone in a smaller kitchen who could use this small countertop unit to replace their sauté pan, stock pot, slow cooker, microwave, rice maker, steamer, and yogurt maker. Contrary to what I mischievously told Pay Chen, it does not also make cotton candy and “the best espresso I have ever tasted”, but it is mightily impressive nonetheless.

I’m hooked, and I understand the love many are feeling for this Ottawa-based success story.

Edinburgh-born/Toronto-based Sommelier, consultant, writer, judge, and educator Jamie Drummond is the Director of Programs/Editor of Good Food Revolution… And he sure does love that hungover purchase.