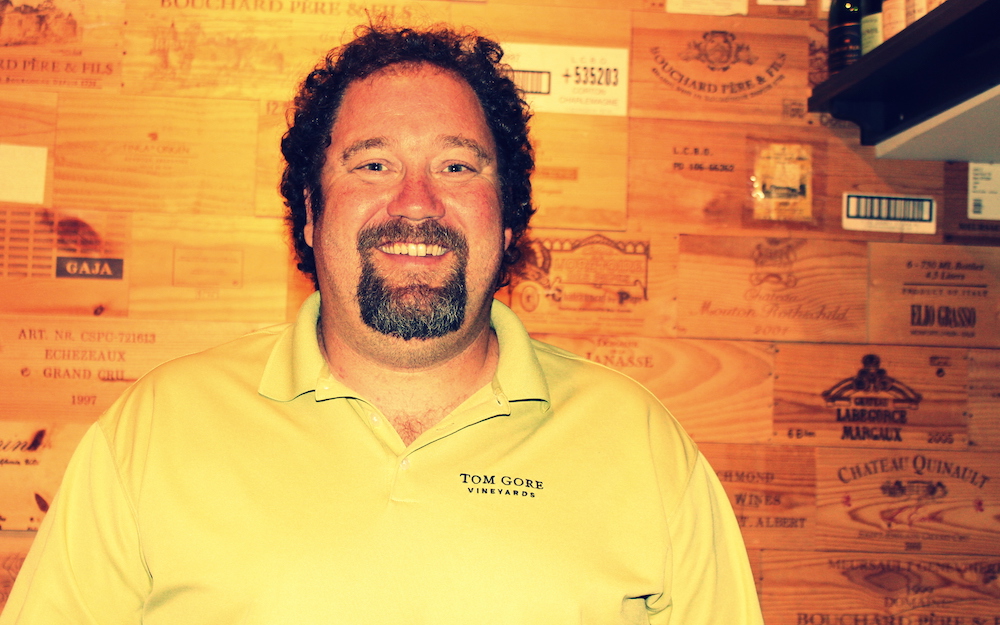 Tom Gore is a second generation Alexander Valley grape grower who got so good at taking care of his, and then others’, vines that Constellation Brands named a wine label after him: Tom Gore Vineyards. Gore was in Toronto last month and, with his Canadian importer Arterra, hosted a small group of wine journalists for a tasting of recent vintages of the Tom Gore Vineyards wines. In the cellar, the Tom Gore wines are made under the ultimate supervision of winemaker Maureen Martin, but in the fields, they are very much made with the literal fruits of Gore’s labour. Viticulture as craft in its own right often gets lost in wine culture. Focus tends to settle on the winemaker in her cellar or simply on the mythical character of terroir, as though the soil and the climate magically grew perfect grapes on their own. What was great fun about meeting and tasting with Tom Gore, other than (of course) the wines themselves, was his focus on talking about his work in the vineyard. It was interesting to hear how he must constantly adapt to different weather conditions and terrestrial variances on the vineyards he manages.

Tom Gore got our attention early in the tasting when he told us he was going to quote Mike Tyson. Certainly a first in my career of talking to vignerons. But the quote made sense coming from a man whose main business partner is Mother Nature: “Everybody has a plan… until they get punched in the mouth.” Gore explained that most of his job is about reacting to what Mother Nature brings him over the course of the Sonoma County growing season, from the weather to hungry animals and birds. He gave us another great quote during the tasting, that he said came from his father, who moved to the Alexander Valley to grow grapes in the early 1970’s: “The best glass of wine you ever had is the one where you want another glass.” This describes the Tom Gore wines well, in the sense that they are eminently approachable and easy to drink.

Here’s what we tasted…

Tom Gore Vineyards Sauvignon Blanc 2017
Between the Loire and New Zealand, I forgot that Sauvignon Blanc is also widely planted in California. It makes sense: Robert Mondavi and the new wave of vintners planted it alongside their other favourite Bordeaux import, Cabernet Sauvignon. The Tom Gore Sauvignon is refreshing and fruit forward, with citrus notes and a pronounced flavour of pineapple. This wine really got and held my attention.

Tom Gore Vineyards Chardonnay 2016
This wine is without doubt a California Chardonnay and reminds me of boozy lunches in the 1990’s. Ten years ago I would have found the oak element, and creaminess of this Chardonnay off-putting, but I am coming around. I’ve decided that it’s OK to discern a little oak in a Chardonnay from a warm(er) climate like California or Australia (to employ a gross generalization), as long as doesn’t dominate the fruit, with it doesn’t in the Tom Gore Chardonnay. This wine wants a table on the patio and poached salmon in a dill cream sauce.

Tom Gore Vineyards Field Blend 2014
I make my wine notes the old fashioned way with a pen in a notebook, and I have developed my own shorthand code for them. One of my shorthand is ‘HITF’, which stands for ‘here is the fruit’ and is written and underlined at the beginning of my note for the Field Blend. Wow. Super purple to blue fruit here, from plum to blueberry and hints of violets. It’s more than half Alexander Valley Petit Verdot, rounded out with a good dose of Malbec, a seasoning of Cabernet Sauvignon and a hint of Tempranillo and Carignan.

Tom Gore Vineyards Cabernet Sauvignon 2017
This wine is currently in the LCBO Vintages program (LCBO# 451336 – $19.95), and is made from Cabernet sourced from the cooler Central and North Coast regions. Like the Field Blend it is fruit driven: black and blue, but like the Chardonnay there is definitely a vanilla oak note framing it, though not overpowering nor lending a sweetness that wines in this category sometimes show. It’s well made for a $20 California Cabernet, and I would put it up blind against others in the $30-$40 range.

Tom Gore Vineyards Reserve Cabernet Sauvignon 2014
The Reserve is made of exclusively Alexander Valley fruit. And at just under five years old, it was still young and grippy with tannin. But the concentration of fruit was amazing, and like the Field Blend, showcased Tom Ford’s talent as a farmer. Big black and blue notes and still a refreshing wave of acidity. This wine would do well with a decanter and a steak, and even better in the cellar for a few more years.