by Malcolm Jolley (with photography, video and note by Zoltan Szabo) I am in the ancient town of Shilda, whose winding old streets climb the foothills of the Northern Caucuses mountains. I am about a 100 miles or so east of Tblisi, not to far from the border with Azerbaijan to the west and just over the mountain range lies the troubled Russian controlled region of Chechnya. A white haired old woman beckons me and a handful of Western guests to come out of the jeeps driven by our Georgian hosts and we walk through the light snowfall to an unheated room to the side of a modest house. One of our hosts confers with an older man (I presume it’s the latter’s house and I believe he is related to our luncheon host – but I’m not sure, as much gets lost in translation). Then, another of our new Georgian friends begins to sweep away the dirt floor from one of several dusty mounds. He reveals a large limestone cap which he digs around with a sort of trowel, then levers open the cap to reveal the lip of a large buried clay vessel and the deep crimson red of the wine made from the Saperavi grape. As our luncheon host fills a cut glass pitcher with the wine, using a ladle-like device with a long (maybe six foot) handle, Zoltan Szabo looks over to me with a full toothed smile and says, “Now, Malcolm, you can go to Heaven because you have witnessed the opening of a qvevri.”

Last November I traveled to the Republic of Georgia to get a firsthand look (and taste) of the ancient country’s wines and, maybe more importantly, their more than 7,000 year old wine culture. I came as the guest of the Georgian Government, which is eager to promote exports to new markets like North America and (like everyone else in the world) China. I was part of a delegation big enough to fill two buses, one with Chinese delegates and the other with a smattering of American, European and Japanese wine journalists or professionals. I was part of a four person Canadian contingent that included Zoltan Szabo, Jennifer Hamilton, Editor of Calgary’s Avenue Magazine and Eva Novicka, the general manager of a large Oakville Banquet Hall. We were lucky enough to have our own special guide, Irakli Nikolashvili, whose family makes organic wine in the Kakheti Region and who has set himself up in Toronto as an importer and promoter of Georgian wine in North America with his company, Georgia Wine Online.

All of this came about in the late summer when Zoltan wrote about some the wines Irakli had managed to get into the Ontario market [see his review here]. His reviews were glowing, and I asked if he thought I could taste some of them, including one wine that was made traditionally in a qvevri, which is a large clay amphora. Georgian still make wine in clay qvevri as the ancient Greeks and Romans once did, before the oak forests of Gaul turned Western winemaking towards the barrel.

I was not a stranger to Georgian wine, since there was a period when my father-in-law traveled to Tibilisi from his home in the UK regularly and he would always bring back a few bottles. He would horde them, waiting to try them when my wife and I would visit. Since his (and our)  knowledge of Georgian wine was limited, and since the written Georgian language is entirely unique and indecipherable to those of us who only know the Latin script, we couldn’t read the labels and it was a blind venture. Still, some of the wines were always really good we just didn’t know how or why. When, eventually, the opportunity came up to find out more about these wines, I jumped on it. In the end, I learned a lot more than I bargained for.

Before my passage to Heaven was assured by the qvevri opening, my wine adventure in Georgia began with a big tasting of wines at a beverages conference in Tbilisi. Zoltan, Jennifer and I stuck together and tasted about 100 wines over the course of a day. Georgia has over 500 (!) unique indigenous vinifera grapes. There is also a smattering of French grapes planted there: Cabernet and Chardonnay mostly. Those vines were introduced more than 150 years ago as a Tsarist “modernisation” experiment, and thankfully they never caught on past a few aristocratic estates, like Tsinandali, which we visited the next day. The Georgian grapes are wonderful, and we tried some amazing wines, from crisp Mtsvane whites to the classic Saperavi reds, including those fermented and aged in clay qvervi.

We tasted some amazing and completely unique wines, including “orange wine”: white wines that are left to macerate and ferment for a year in qvevri on there skins, giving them in Zoltan’s words, “the structure of a Barolo in a white wine!” And we tasted many qvevri reds, mostly Saperavi. Sapervi may be loosely translated as “dye”, and the wines are deep, deep red with major tannic structure.The uniquely Georgian verietal is one of the few redgrapes whose flesh is as crimson as its skin (cork dorks will want to know that the technical term for this is “teinturer”). As a result, traditional Georgian viniculture uses no wood. There is no need: the grapes provide more than ample tannic structure. Modern wineries ferment and age in stainless steel. And the traditional vintners use the alkaline property of the pottery in the qvevri to ferment and age, which seems to instantly mellow the astringency. The next day, when I tasted new wine that was only a few weeks old from the past year’s fall harvest, straight from the unearthed qvevri described above, it was fantastically balanced. Of course some of the wines, weren’t very good at all – this happens everywhere. But in particular, because sealing qvevri is a haphazard business – the ones I saw were sealed only with mud or clay, but some use bees wax – there is a chance for air to leak in and, at the show, we tasted a good number of tragically oxidated wines. Tant pis – the successful ones were well worth the trip. We three Canadians in the Caucasus spent most of the day shaking our heads and smiling at one wine after another that was not strange, but was still not like anything we had tasted before.

Dr. Kosarka and Zoltan avail themselves to the large table of open bottles for tasting at the Benjamin wine bar and shop.

Because Zoltan, Jennifer and I tasted so ferociously that day in Tibilisi, we missed the lunch that had been set out. As the tasting wound down, Irakli decided to take us, as well as the Hungarian diplomat and wine enthusiast Dr. Korarka, into the old city of Tibilisi to the Benjamin wine bar to eat, and taste yet more delicious wines. I will write about Georgia’s fantastic food, which marries Turkish and Persian influences with a Christian love of pork,  in my next post about our trip to Kakheti, but in the taxi as we raced along the river embankments past Ottoman, Tstarist, Soviet and post-1991 architecture, I began to realise why I was in a state of wonder the whole day.

The dominant international wine culture is basically French. In Provence, on the banks of the Rhone, the Romans established their wines and ideas thereof and linked them with their (Western) church. So wine making spread throughout most of Europe based on a model that used wooden barrels to ferment and age. Eventually the Bordelais began to export and market their wines to the English and Dutch, and the Burgundians to the Germans and Russians so from the Thames to the Volga this is how we thought table wine should be. The French made wine culture as we, in the West, know it. Yet, the Georgians have nothing to do with this. They pre-date it all, having been making wines before anyone ever. If, like me, you care about wine and its history and place in culture, the example of Georgia is a complete revelation. There is no way of comprehensively understanding wine without taking in consideration the area that first made it in Neolithic times more than 7,000 years ago, and still enjoys it passionately today.

As we wound our way through the narrow, cobblestone streets of old Tbilisi, It struck me that Georgians were making wine a few thousand years before the Greeks held their symposia and far before any Roman even thought about an orgy. And more recently, for at least a thousand years, under the rule of the Muslim Ottomans, they made their wine more or less on the down low – wine, and wine culture in Georgia is both a question of preserving nationality and the Orthodox Christian faith. There’s a reason beyond viniculture and perfect temperature control that the qvevri are and were buried: a pillaging Saracen or Cossack might well have no idea he was standing on so many litres of great wine when he barged into a Georgian homestead intent on whatever business from plundering to levying taxes. Sign at a vineyard in the Kakheti region of Gerogia

Very soon the taxi stopped and I disembarked to eat what was going to turn out to be a very memorable meal. The next day I was the guest of a winemaker in the Caucaus, who brought me into his ancestral town, to witness the qvevri opening. I was about to see the country and learn how Georgian wine culture truly manifested and integrated itself into the pleasures of the table and learn a thing or two about Caucsus hospitality…

NEXT POST: A VINEYARD LUNCH AT CHELTI IN THE CAUCUSES. HOW GEORGIAN GASTRONOMY AND TOASTING COMPLIMENT THEIR ANCIENT WINES AND PROUD WINE CULTURE…

Read more of sommelier Zoltan Szabo at zoltanszabo.org and follow him at twitter.com/zoltanszabo. Malcolm Jolley is the founding editor of Good Food Revolution and a food and wine writer based in Toronto. Follow him attwitter.com/malcolmjolley. 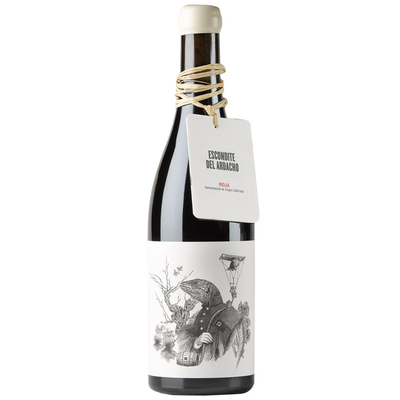 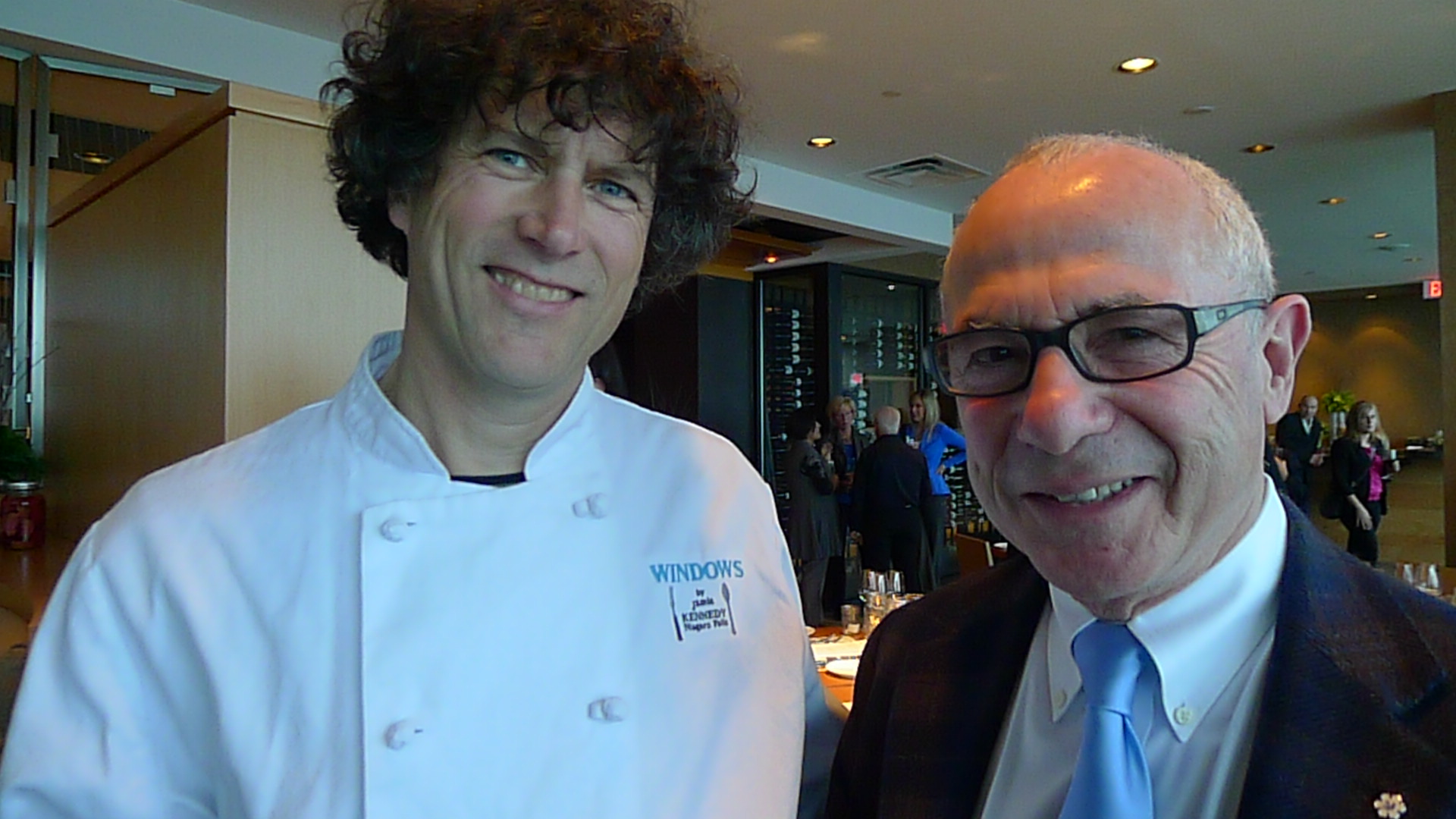 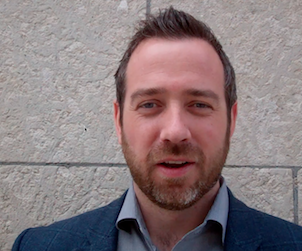 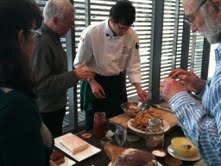