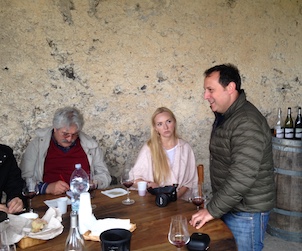 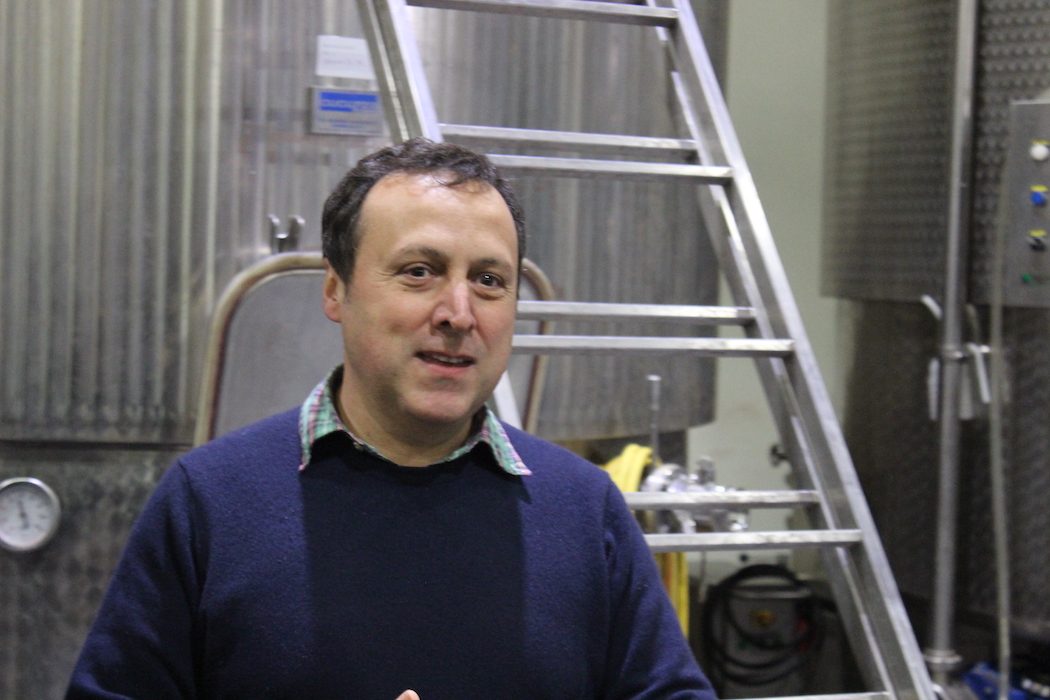 Giuseppe Russo at the Girolamo Russo Winery in Passopisciaro, Sicily.

I was not altogether myself when I met Giuseppe Russo at the gates of his winery in Passopisciaro. In fact I wasn’t sure exactly who he was or where we were. We was a group of a dozen or so wine writers, half Italian, half everything else; all guests of Assovini Sicilia. An hour and a half earlier, I boarded our mini-bus in the sunshine of sea level Catania. The Ionian sea sparkled on the other side of the boulevard and it was warm enough that I took of my light, linen jacket. Because I had just flown over the night before, it took barely a minute or two before I was napping in my bus seat, and now I had woken up in an entirely different land. It was foggy, even misty and grey. It was cold and damp and reminded my more of Wales than anywhere Italian, let alone the cactus dotted hills of Western Sicily. We were assembled outside of an industrial looking building by a narrow gauge railway in a small village. Inside, through an open door I could see fermenting tanks, and we went in to have a look.

Giuseppe Russo was our first winemaker. I mean his winery, named after his father, Girolamo Russo, was the first stop on a three day tour. I had meant to do some homework before the trip, but had been distracted, so I really had no idea where I was, other than a winery in Sicily. The thing is, if you’ve been to a few wineries, they all kind of look the same, and despite the intricacies of vinification, the basic process of making wine from grapes is pretty straight forward. Our guide, fluent as she would prove to be in English, was still getting her sea legs, getting used to translating to a group of English speakers so the communication was a little laboured at first. I gathered that Giuseppe had created an estate winery at this facility that was once a cooperative. This is a familiar story on Italy, France and Spain where most wine production was done by village cooperatives until relatively recently. After ten minutes or so of looking around the winery, we were marshaled to leave, and I thought maybe that was it. As we filed out, I caught glimpse of the wineries labels, by the bottling line. The label looked familiar, but I was too jet lagged, groggy and bewildered to recognize the image of a farm with Mount Etna in the background. 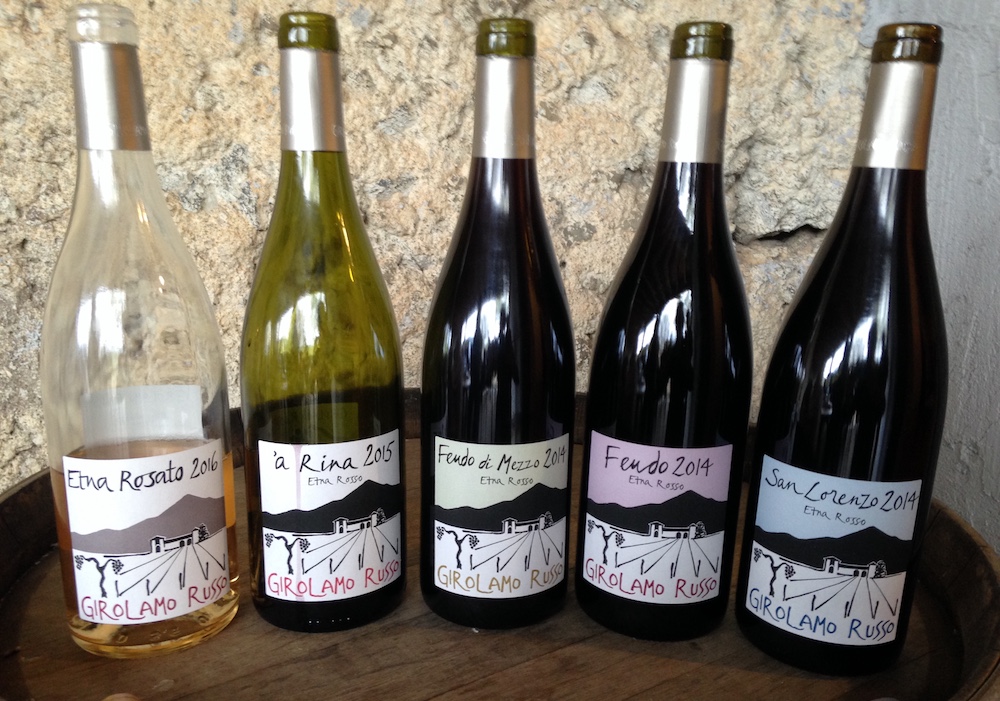 When we got back in the bus, I could see that Giuseppe Russo got into his car and beckoned our driver to follow him. Aha, it looked like we were off to the vineyards. After 15 or 20 minutes, we took a turn onto a tree lined lane towards a house that looked like the one on the wine label. On either side of the lane, and stretching into the craggy hills surrounding us were single bush vines, pruned into a goblet of three canes: Nerello Mascalese and Nerello Capuccio, we were told. This was one of the estates, San Lorenzo, and the old farm house was being converted into a tasting room. There was table set-up in a covered terrace, and despite the cool weather, that’s where we sat to taste the wines of Girolamo Russo.

We started with last fall’s rosato, which like all the Girolamo Russo wines is a blend of Nerello Mascalese and Nerello Capuccio, and which my notes say I enjoyed very much: it was lively and crisp and rounded with generous red fruit. The rosé improved my mood and piqued my interest in this Giuseppe Russo character, but it wasn’t until we started tasting the reds things started to click and my note taking starts to involve a lot of exclamation points. 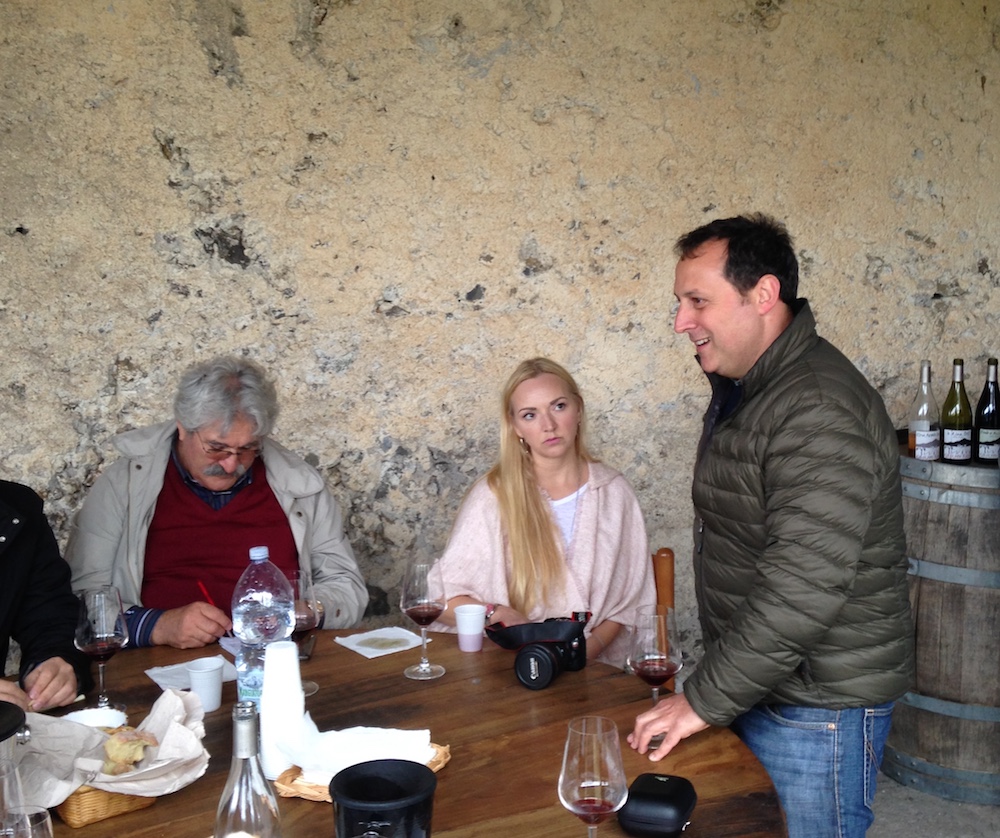 Almost exactly two years earlier I had been on vacation with my wife in Palermo. On our first night in town, we had a recommendation for a good restaurant close to the famous Vucciria market, Gagini. Gagini is a Slow Food recognized restaurant that prides itself on serving locally sourced Sicilian foods and wines, and we ate very well and enjoyed ourselves very much. One of the many ways Gagini served us well was in the form of a young sommelier who we let open whatever he liked at an agreed upon budget. The wine that really stood out, the one that I took a picture of its label, was a red wine from the Etna DOC: The 2012 Girolamo Russo ‘a Rina. This was the same wine, a blend from all of Girolamo Russo’s vineyards, whose 2015 vintage I was tasting with its maker, Giuseppe. This was going to be quite a tasting.

We tasted a few Girolamo Russo wines that cold, grey afternoon: the 2015 ‘a Rina, then single vineyard wines such as the 2014 and 2010 Fuedo di Mezzo and 2014 San Lorenzo and Fuedo, then ended back more or less where we started with a 2011 ‘a Rina. They were all spectacular. The older vintages were fully alive and giving fruit. All these expressions of cool climate, high altitude (between 600m and 1000m) viticulture had that perfect cherry femininity of great Pinot Noir with the most lovely earthy spice of garrigue, or ‘macchia’. Giuseppe Russo told us that he thinks that Nerello Mascalese and Nerello Capuccio are the only grapes that can express Etna’s terroir, and we were not going to argue with him. This was shaping up to be an interesting trip.

Girolamo Russo wines are represented in Ontario by the Brix and Mortar Wine Company, whose website reports they have some in stock. 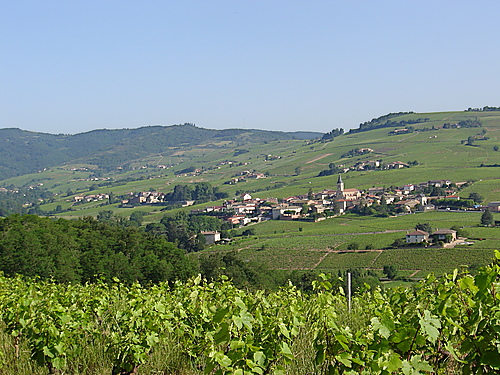 Exploring Beaujolais : A Look At The Fleurie Cru 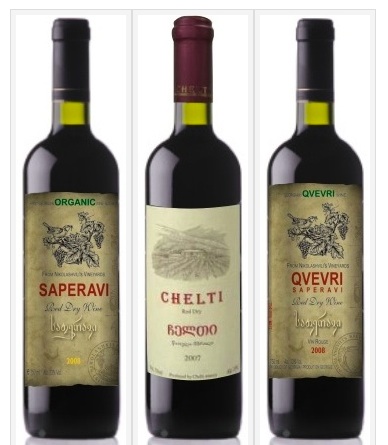 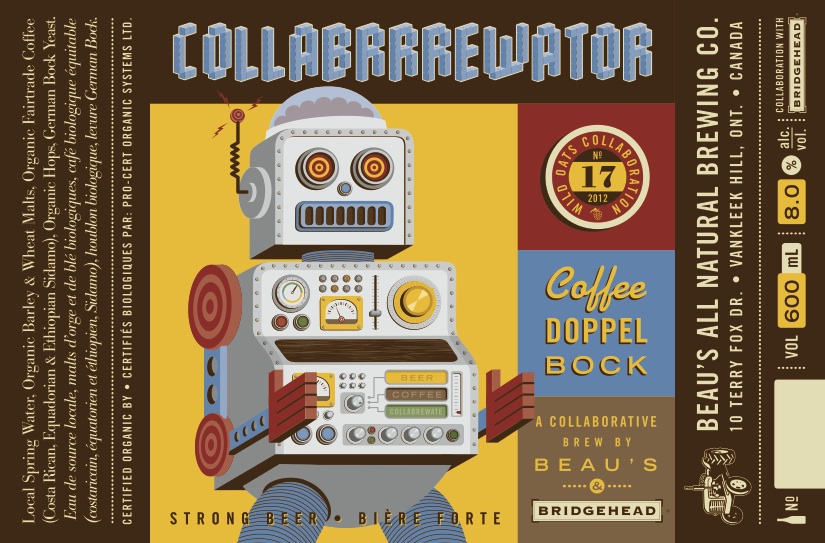