In 2002 Luis Reginato joined forces with Dr. Laura Catena to create the La Posta winery project. Reginato is the Vineyard Manager at Bodega Catena Zapata, and La Posta was conceived as a way to make single estate wines from some of the best sites in Mendoza farmed by Catena’s growers. On a recent Zoom interview Reginato explained the criteria: “The idea with Laura was to work with growers who old vineyards with very old vines. Then, they were over 40 years old.” He expanded to say they looked for vineyards that were as, Luis said, “long rooted” and irrigated with old fashions ditches. In the 1980’s Argentines drank 100 litres of wine per person a year, now it’s 20. In the past, grape growers were rewarded for high yields, but in the present it would be for quality, and for domestic and export markets alike. Catena and Reginato sought the growers with the best potential for that shift and offered them long term contracts at premium prices to lower their yields. The handful of growers they recruited in the early years have stayedvwith them, the quality of the wines continues to improve as the vines get older and every bottle of La Posta acknowledges the name of the farmer who grew the grapes that were used to make the wine inside. “They are the stars,” said Reginato about the growers with whom he works. He also wanted to make a point: “You have to understand that these were very good viticulturists before, just with a different goal; they wanted to produce higher yields.”

I spoke to Luis Reginato this week because two of the La Posta wines have arrived in Ontario as part of the latest LCBO Vintages release: 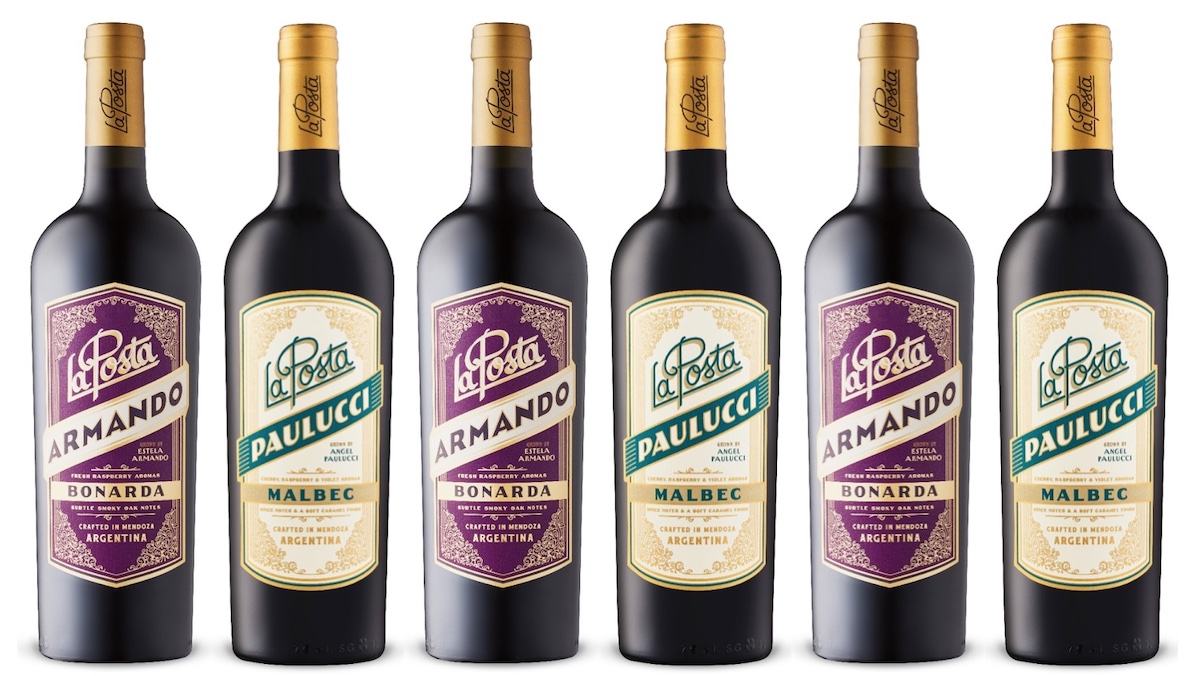 The Bonarda comes from the vineyard Estela Armando, one of the original 2002 growers*. While we don’t see a lot Bonarda exported from Argentina, there it’s the “second red wine” with production only trailing only Malbec. The 2019 La Posta Armando is big on blackberry and plum fruit that finishes on a blueberry note seasoned with a touch of wood spice. It’s lively on the palate with sandy tannin and good acidity. Reginato says it’s his pasta wine, and I can see why.

The Malbec comes from  the vineyard of Angel Paulucci, another 2002 original*. Paulucci is an immigrant who was a mechanic in Italy. When he went to the bank in Mendoza for help getting an auto shop started, they told him they only gave out agricultural loans, so he took one and became a farmer instead. Paulucci planted the Malbec vines about 50 years ago at an elevation of about 1,000 metres, and now works with his son and grandson. The 2018 La Posta Paulucci is also very much alive with bright red cherry fruit that moves into blackberry, and fresh acidity. This wine was a reminder for me that Malbec is actually quite a versatile and the Paulucci is far away from the heavy, super-extracted, hot and sweet black fruit Argentine Malbecs that dominated the export markets. It’s a food wine and it would be hard to resist the temptation to put it in front of a steak, or a few grilled lamb chops.

Both these wines are remarkable examples of what seems to be a bit of a revolution in the wines of Argentina, or at least the ones that get sent to export markets like Canada. They are lighter and more food friendly, with an emphasis on fruit and a light touch on wood. I asked Luis Reginato, who grew up in Mendoza, and has had a front row seat watching Argentine wine evolve, if he thought the La Posta wines were part of a new style and he agreed, saying that he thought this is what consumers in Argentina and around the world wanted.

The other thing about the La Posta wines is that they are rather aggressively priced, each well under $20. It’s fun that the LCBO has allowed both wines to be released at the same time, so they can be compared. Like siblings, each is it own entity with a distinct personality, yet there is a definite family resemblance. Click here to find the 2019 Armando Bonarda at the LCBO, and here for the 2018 Paulucci Malbec.

*There are detailed information sheets on each of the vineyards at lapostavineyards.com/wines.html.