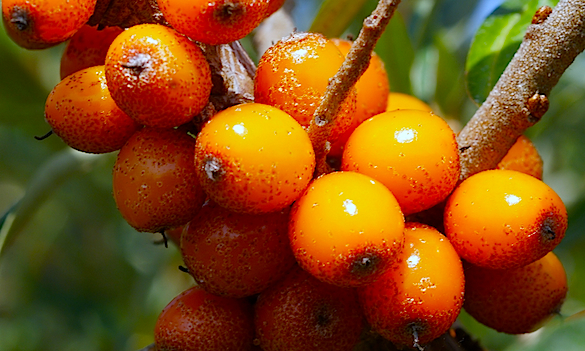 I’ll admit it: I’ve gone two or three years whereupon on the mention of sea buckthorn from a restaurant server I have smiled and nodded and pretended to have a clue about whatever this ingredient might be. I have practiced this fakery at home and in some of the more written about restaurants in New York, London, Chicago and Montreal, each time suppressing my embarrassed blush and vowing to go look it up the minute I had the opportunity to consult my smart phone alone. But I never did, and sea buckthorn remained a mystery to me until I interviewed Chris McDonald a week or two ago on the occasion of his ‘culinary instalment’, The King of Denmark.

I turns out that sea buckthorn is a shrubby bush of a tree that produces clusters of small orange berries. It’s the berries, which are typically procured frozen, that the chefs are using. They are using them, as McDonald explained to me, because they are super, super sour: they add acidity to any dish, whether savoury or sweet.

Sea buckthorn is native to coastlines of Northern Europe and the British Isles. This is important to its recent popularity internationally and here in Canada. We have René Redzepi and his horde of Nordic cuisine Viking-raider-chefs to thank for popularizing sea buckthorn around the world of fine dining. It is, you see, the perfect non-Mediterranean substitute for lemons or lemon juice.

Recommendation from the Prince-Chef of Denmark, would be well enough to get sea buckthorn onto menus from St. John’s to Victoria, but it turns out the sour shrub has a particular Canadian connection. Manitoba has one of the highest concentrations of Canadians of Scandinavian decent, and at some point in the 20th Century, some wily prairie agronomist decided the steppes west of Lake Superior would make the perfect habitat for the sea buckthorn tree. He (or possibly she) was right, and the tree was extensively planted as windbreak and for its trait as a nitrogen fixer. In the last 20 or years, in the wake of the pomegranate and açai crazes, sea buckthorn was rediscovered as a “super fruit” and a booming market for it was established for it in health food stores. If you Google ‘sea buckthorn canada’ you’ll get mostly results for miraculous anti-aging and beauty applications, which is all very encouraging next time one finds one’s self on the business end of a sea buckthorn cocktail.

PS. If I had been paying attention, I could learned a lot more, a lot earlier about sea buckthorn from Canada’s great font of culinary knowledge, Anita Stewart. There is bound to be sea buckthorn galore on her annual Food Day Canada, this August 3rd.