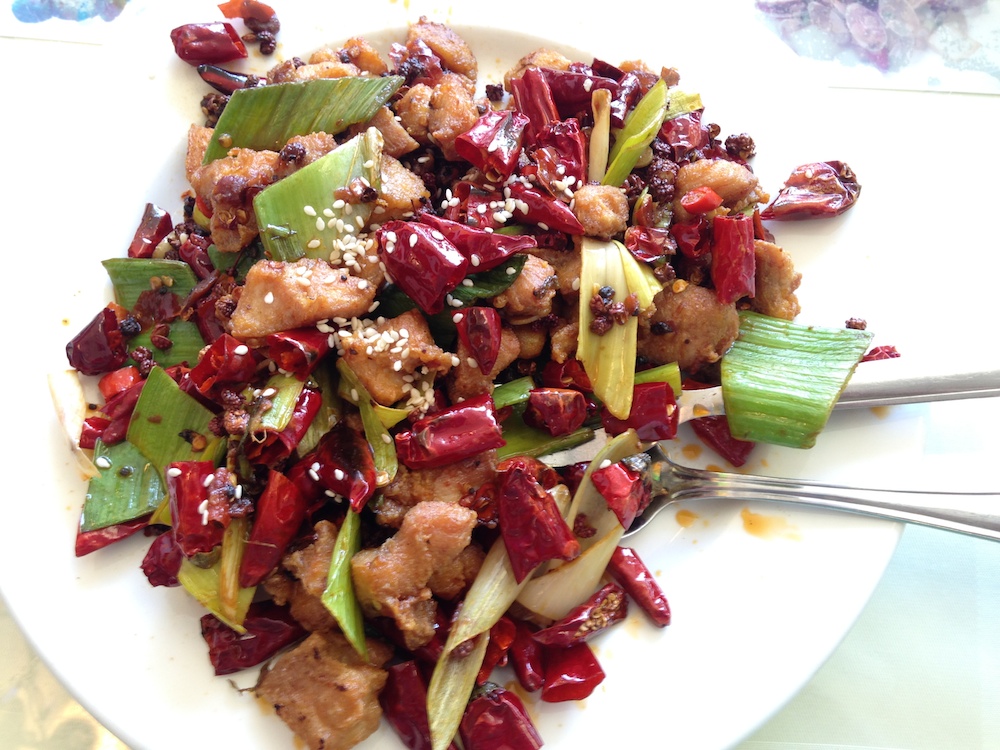 As a practicing capsaicin addict, the cuisine of Sichuan (or Szechuan) province holds special appeal, because of its interplay between hot chilli and its eponymous pepper. Of all the foodways to accept the benefits of the Columbian exchange, Sichuan must of been the most primed, since the Sichuan pepper numbs the mouth such that more chilli may be endured than normally would be the case. If that sounds like fun to you, as it has to me since reading about it from sources like Fuschia Dunlop and Anthony Bourdain, then the $10.99* platter of Fried Diced Chicken with Chilli at Sichuan House will be right up your alley.

What happens with the chilli chicken at Sichuan House, a modestly furnished, bright lights and no-nonsense storefront on Spadina south of College at Nassau, is as follows. A diner is warmed up with a small bowl of mushroomy hot and sour soup, a salad of seaweed and of salted roasted peanuts in their shiny red skins. Once these are dispensed with comes big plate: bite sized morsels of crispy fried chicken off the bone sitting in a stir fry mound of roughly chopped dry red chillies seasoned with sichuan pepper, bits of leek and the odd slice of garlic. That’s about it. If the recipe doesn’t sound terribly complex, it’s just as well: this dish is not about subtle flavours, it’s about getting high on endorphins while satisfying some deep primordial need for umami and texture. Nor is this dish designed to elicit polite conversation. It needs to be eaten in one continuous so the chilli builds up into a crescendo of grunty, red faced, sweaty bliss.

The sichuan pepper is, I have read, referred to in the dialect of its native habitat as the “flower pepper”, and while it’s certainly fragrant, I might be more inclined to call it the “coniferous pepper” for its pine and cedar properties. Whatever notes if gives come through up into the nose in the chili chicken dish at Sichuan House and remain a sort of resonance in the nasal passage over the din of the fiery explosions on the palate. The chicken tastes mostly of salty soy from it’s fried crisp coating. The bird’s main job, I think, is to give texture: hard outside, meltingly soft inside. The leek and garlic meld with the stiff chillies, offering just a hint of alluvial richness: they don’t make a big impression, but I think I’d miss them if they weren’t there. The chillies, while busy doing their physiological job, sort of melt into everything as well. The numbing of the sichuan pepper makes the delirium of the spice sweet and almost transcendental. It’s a really good dish, if you like spicy food.

*Yes, this is technically over the Lunch <$10 threshold (my total bill including a pot of tea and tax was $13.83) , but I’m using Food Writer’s Math™, which dictates that the platter could easily be shared among two people, especially given the included appetizers of salad, peanuts and hot and sour soup. Of course, the likelihood of two people restricting themselves to just one dish at Sichuan House is pretty slim, but it’s enough to get the Sichuan chilli chicken into the category for me.