Try This : A Cheese Advent Calendar 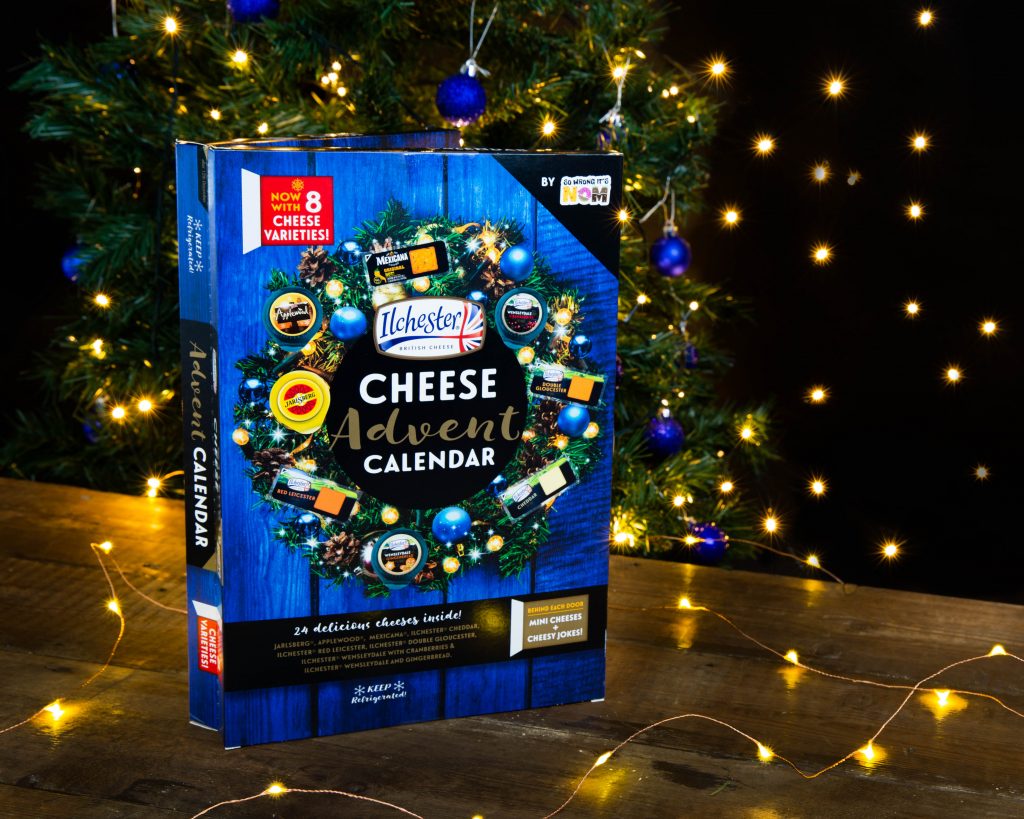 As cheesy as it may sound (pun intended), this Ilchester cheese advent calendar is the perfect antidote to post-Halloween sugar overdose fatigue.

Once again our five-year-old made out like a blooming bandit this Halloween. His enormous sack of crappy candy and cheap chocolate sits in our kitchen, hanging of the back of a chair like some saggy hyperglycemic albatross until the novelty of on-tap sugar rushes wears thin towards the end of November.

I’m not in any manner innocent when it comes to such indulgences, as for the past two weeks I have been surreptitiously poaching decidedly non-fun-size Kit-Kats, Mars Bars, Aeros, and Caramilks by the greedy handful to accompany my morning cups of tea, and then wondering why I was suffering from aching headaches from about noon until 4pm; my body is simply wholly unused to such an intense sugar rush. I’m currently sick to the back teeth of the mere sight of chocolate, and so I wasn’t looking forward to the annual advent calendar extravaganza.

Last year the wee guy must have pulled off an early morning heist whilst we slumbered, as from around the 10th of December onwards all of the advent calendar’s doors appeared to have been had been emptied of their contents. I was about to get angry about this until I remembered committing an almost identical offence as a young lad, although it has to be said that I had attempted to fill the raided spaces with Ice Magic chocolate sauce in an effort to cover up my crime.

When I received an PR email last week concerning the launch of a cheese advent calendar my curiosity was most certainly piqued. When I mentioned to my wife that I had asked for one for review, she suggested that I would probably get more out of it than our son, predicting that his love of chocolate would win over his love of cheese. I thought otherwise…

Opening a few doors of the cheese calendar yesterday (a few weeks early) for review purposes, he was absolutely over the bloody moon. Having never heard of a cheese advent calendar before, the idea of such a thing even existing, let alone him having one in our fridge, filled him with a palpable inner joy!

“Am I the only boy in Canada with a cheese advent calendar, Daddy?”

“I’m going to tell everyone at school.”

He does have a very special relationship with cheese, something that I have nurtured over the years, and it appears to have really paid off.

Interestingly enough, the Norwegian-owned Ilchester don’t actually make any of the cheese themselves, but work like a kind of Cheese Negociant, purchasing and blending a selection of British cheeses and adding additional ingredients such as spices, herbs, and… errr… gingerbread. Well, I guess it’s rather festive!

So how do the cheeses taste? Well, I was told by our budding gastronome/casomorphin addict that the 20g “buttons” of plastic-wrapped cheeses he tried were “really, really yummy… ten thumbs up”.

The little nibbles he allowed me to have were all pretty tasty, obviously not artisanal, but to be honest, if our son is more interested in munching on these little cheeses than the trashy chocolate one normally finds in advent calendars then this cheese advent calendar gets a solid four and a half apples from me too.

UPDATE : The Red Leicester is very interesting indeed… the one we shared this morning tasted decidedly truffled in nature.

And I’d like to make this a new seasonal family tradition… the cheese advent calendar.

Please note that one should keep this advent calendar in the fridge.

Edinburgh-born/Toronto-based Sommelier, consultant, writer, judge, and educator Jamie Drummond is the Director of Programs/Editor of Good Food Revolution… And he’s most happy with this seasonal acquisition.