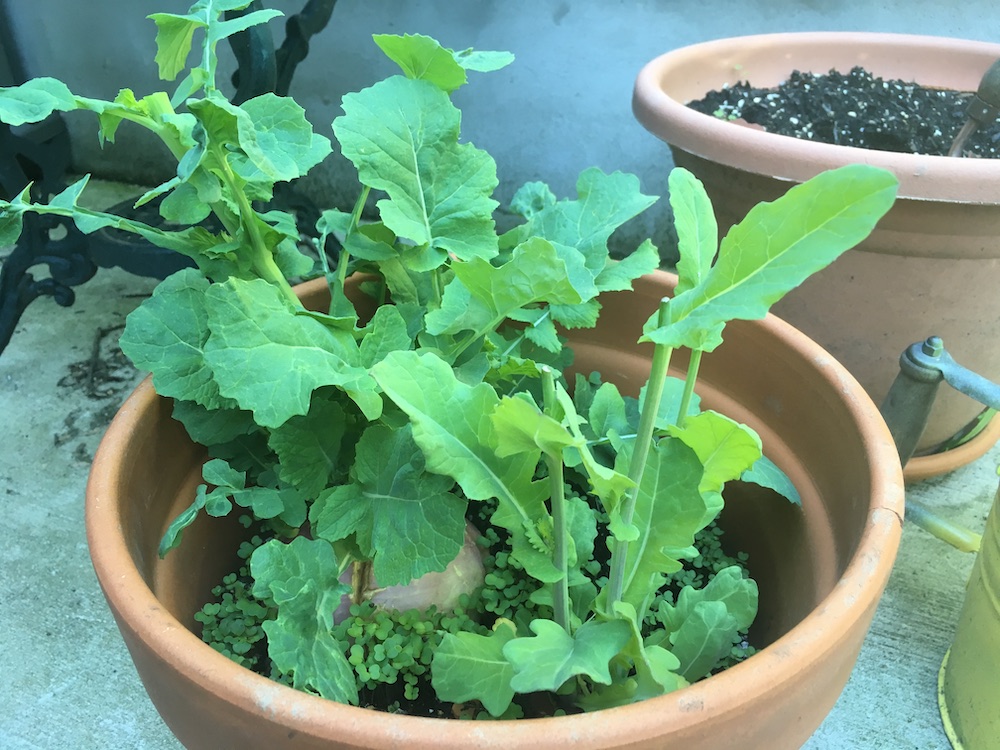 CIME DI RAPA
Turnip tops (greens)
Turnip tops (greens) are a popular vegetable, especially in Tuscany, where they are also known as broccoletti. They are boiled and eaten in salad, or parboiled and then sautéed in oil with garlic and chili, or with tomatoes, as in Tuscany. They can also be cooked in a sauce pan, with only the water attached to their leaves in a slow stewing method, which retains the pronounced flavour of the vegetable. In Puglia, turnip tops are often cooked with pasta and eaten with it, dressed with olive oil and chopped garlic. – Anna Del Conte, The Concise Gastronomy of Italy (London: 2001)

I first came across the mention of cime di rapa about twenty years ago when my wife and I began to acquire and madly cook through the River Café cookbooks by Ruth Rogers and Rose Gray. I assumed what they were referring to what is sold here as rapini, and some sources wrongly give rapini as a synonym for turnip tops. In fact, rapini is another strain of brassica, patented by its consortium of Texas growers, and developed from a wild Sicilian green brought over by immigrants. It was only when I read somewhere that one of the differences between the Italians and the English speaking peoples is that we feed turnip tops to our animals and eat the roots, while they do the opposite. It’s likely closer to the truth that the Italians eat all the parts of the turnip, but the point sunk in. I had been fooled into eating fake cime di rapa and, worse, there didn’t seem to be anyway to get my hands on any.

Luckily, my fake turnip top discovery coincided with a Christmas trip to my in-laws in Wales. There, despite it being deep December, many of the hill pastures surrounding their farmhouse were green with some kind of crop that I didn’t remember seeing or noticed on previous summertime trips. Those fields turned out to be planted with a late crop of turnips, which the local sheep farmers grew to feed their animals (leaf and root) over the winter. Here was the chance to finally try real turnip tops, and I went to a neighbour’s field and poached a plastic bag full of cime di rapa and took them home to sauté with garlic and chili and see if and how they were different from rapini. The main difference, I happily discovered, now seems obvious but then was revelatory: they taste like turnips. If, like me, you like that tangy, slightly earthy taste of turnip root, and would be pleased to sense it over a bass line of bitter green broccoli and mustard brassica, then you too will want a steady supply of cime di rapa. 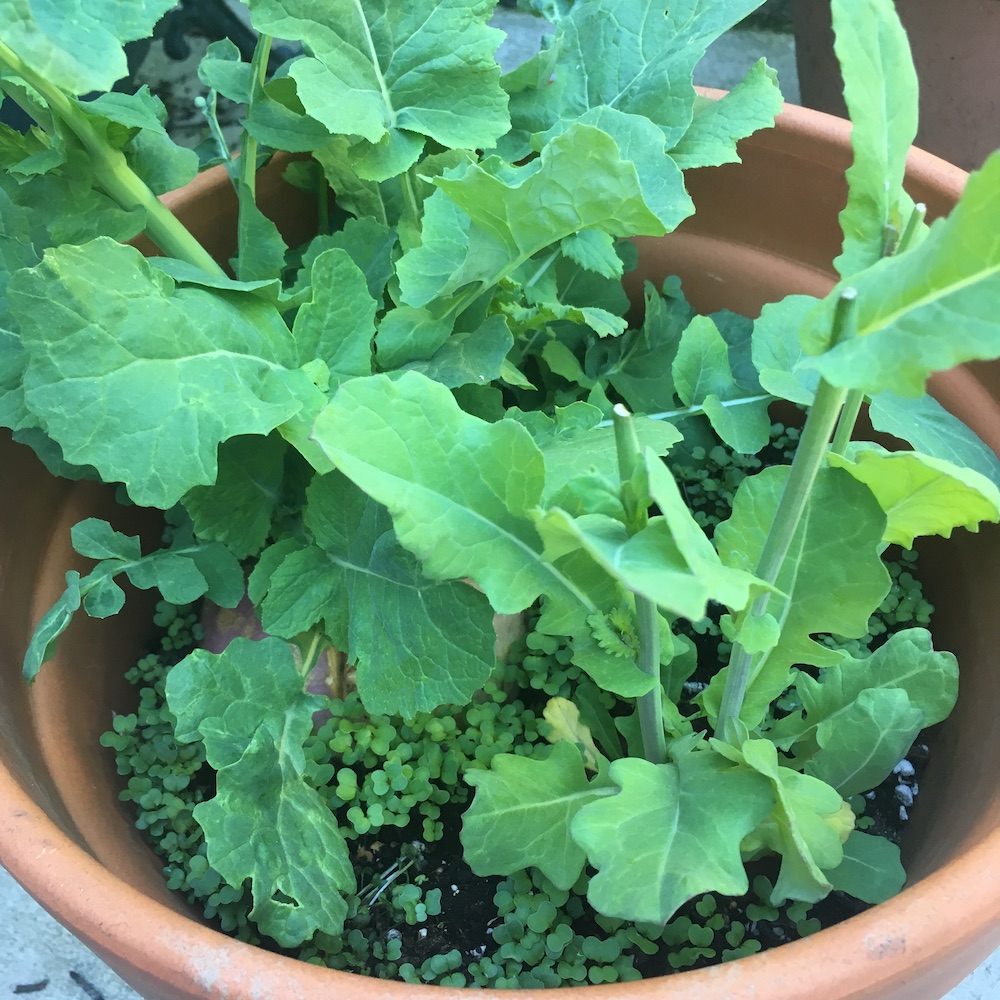 I don’t know why it’s common now to buy beets with their tops on, but not turnips. Maybe the turnips we buy in the shops have traveled so far, or been stored for so long, the greens have long been wilted or were cut off right away to conserve space for transport. There is clearly not overwhelming demand for them, as I have not seen them for sale outside of farmers markets, and then only rarely. Christmas visits to Wales struck me as a welcome but narrow field of opportunity to get my hands on cime di rapa, so a few springs ago, I bought a couple of large organic American turnips from Whole Foods and planted them in a big pot so that only their denuded tops were exposed. In a week I had cimi di rapa, and had to be careful not to let the plants bolt. I have also grown cimi di rapa from turnip seeds, but that’s a much longer excercise: the plant an actual turnip trick delivers quickly. I cook them in the ways Del Conte describes above, and also make bean soup with them if its cool. I have tried to grow them in the winter as well, with middling success that may have had more to do with my neglect: the plants dried out in the house’s hot and dry furnace air. Anyway it’s more fun to take a glass of wine out into my backyard on a summer’s evening and observe this year’s growing crop, and if you want the true cime di rapa now you know what to do.