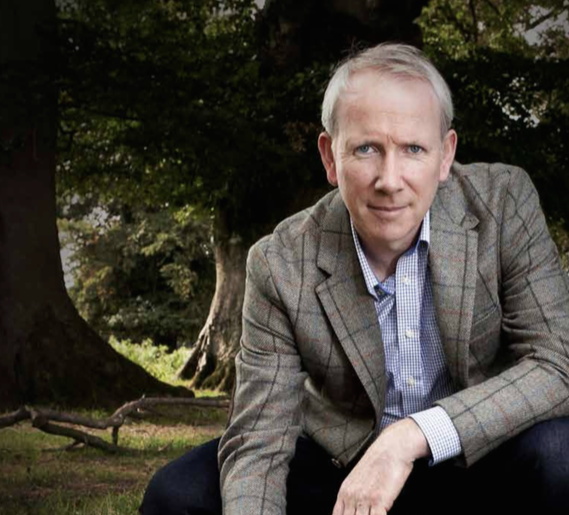 There’s some serious excitement around what’s happening in the world of Irish Whiskey these days. We sat down for lunch with Bernard Walsh of Walsh Whiskey Distillery to discover just what’s going down.

Good Food Revolution: Hello Bernard. I’ve noticed that we appear to be going through a explosion in the growth of smaller, artisanal Irish Whiskey producers. What do you put that down to?

Bernard Walsh: Firstly I would have to point out that this overnight success (or explosion) has been on the cards  for almost 20 years.

Irish Whiskey (IW) has been growing now for more than 20 consecutive years. Of which the last 10 have been spectacular…. IW has grown at a Compound Annual Growth (cagr) of 9% per annum for the past 10 years, making it the fastest growing whiskey category in the world as well as the fastest growing brown Spirit. But don’t worry… we’re not losing the run of ourselves… We are but a drop in the whiskey ocean when we look across the pond to Scotland.

That said the revolution has started. The start has to be put down to one company “Pernod Ricard” who backed one horse “Jameson” and back it not just in words but with dollars. They have built a world class brand, however from this has grown a consumer (millennial) who is looking to trade up and discover what more can IW offer.

GFR: And where does Writers Tears fit into all of these developments?

BW: Through the demise of IW in the 20th century also came a dumbing down of the taste and available expressions. We started business in 1999 and were one of the early renegades trying to broaden out the flavour profile (as it was in the 1800’s) as we arrived with Brands such as Writers Tears and The Irishman.

GFR: Please give us a little bit of the Writers Tears story? What differentiates it from the many other whiskeys out there?

BW: Writers Tears was inspired by the Irish distillers of the 1800’s. This was a time when Ireland dominated the world of whiskey with two styles “Potstill and Malt. The vatting of these styles was a luxury velvety blend. Spicy yet creamy with wonderful bursts of flavours with each breaking wave!

Writers Tears is a recreation of this 1800’s old Irish style. Not only was this a golden era for IW but a golden era for Irish Writing with writers such as George Bernard Shaw, Jonathan Swift, Oscar Wilde, James Joyce, Yeats, Bram Stoker… the list goes on. It was no secret that our literary wardens enjoyed their Irish Whiskey and in particular this blend of Pot and Malt. Stories are told of writers imbibing so much of this amber nectar that when they cried their tears were of whiskey.

GFR: I’ll admit that I’ve felt as if I’ve been in that particular predicament a couple of times… 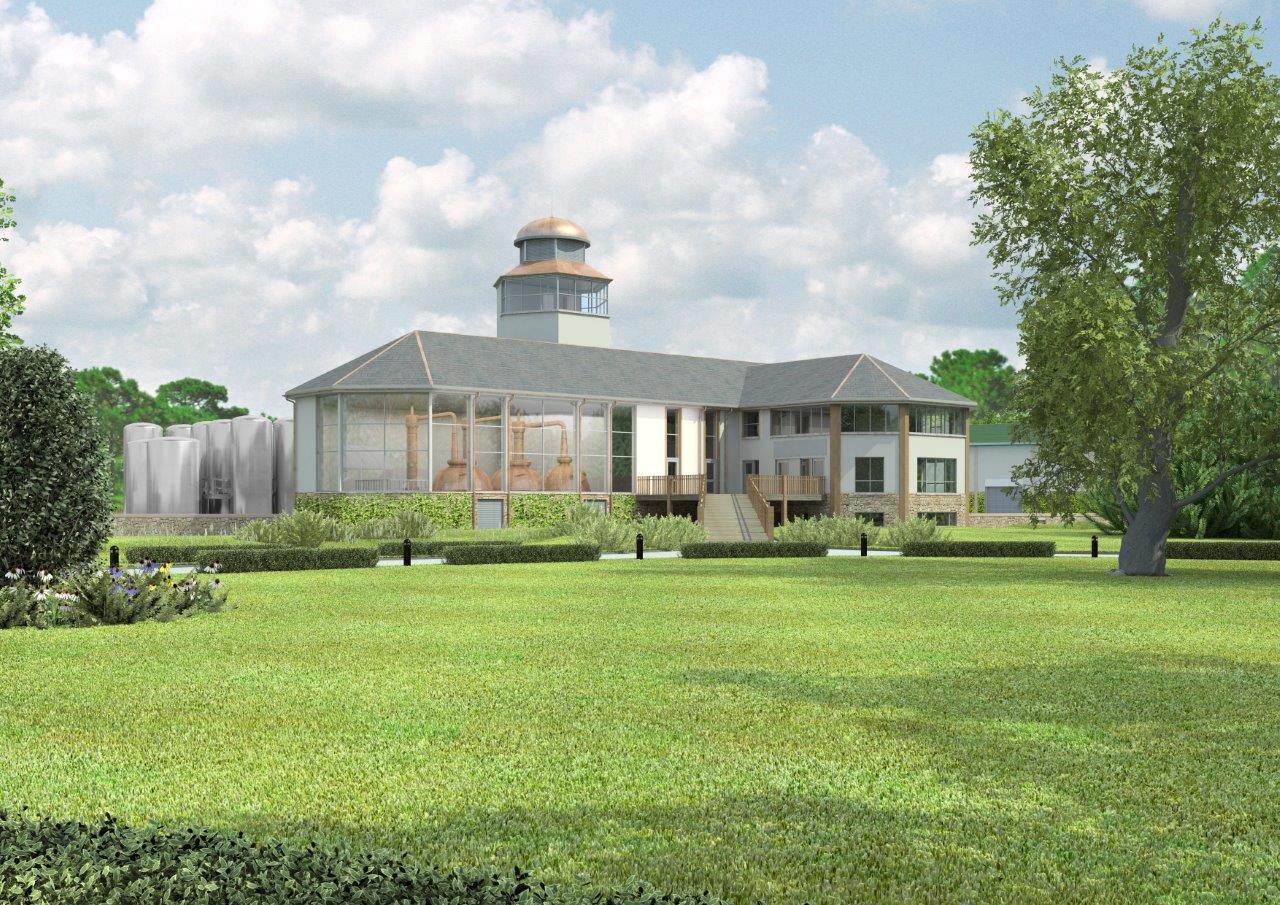 The new distillery at Royal Oak.

And I believe that you have recently finished work on a brand new distillery?

BW: Yes in Royal Oak, County Carlow. The purpose is two fold, firstly to augment our current stocks as there is not enough Irish whiskey stocks, secondly to deliver a whole new taste in Irish Whiskey, a taste of the south east (of Ireland). Scotland have done wonderfully well to develop regional tastes. I would like the same to happen in Ireland.

GFR: How did you find yourself doing what you are today? Was whiskey always a love of yours?

BW: Being one of nine is just a typical Irish Family (well at least when I was growing up). And as part of Irish Life the oldest son remained on to farm while the other 8 sought their way in the world. Having travelled extensively on that journey I felt drawn to the vineyards, wineries and congnac distilleries of France. I loved how they cultivated that delicate fruit The Grape and turn it into the most wonderful wines and  spirits.

In Ireland growing grapes was obviously not an option but growing Barley is something we excel at. I loved the idea of taking barley and turning it into a beautiful aromatic whiskey, in effect my return to the land.

Whiskey was really a drink of my grandfather’s generation. In his later years in life Grandfather went blind. Each day my grandmother would read to him accompanied by a glass of whiskey. Occasionally he would nudge me to sip as he would put it… for quality control reasons. So I started with the good stuff!

GFR: And can you remember your first taste of a good whiskey?

BW: Well, beyond what I said previously, it was not until I reached my mid twenties that I moved outside of the Irish Parish and sampled some of our Scottish cousins whisky (we generally refer to the Scots as our cousins… a term of endearment).

This was an education….the length and breath of whiskies was just amazing…where do you start. The idea of a peated whiskey was very alien and took some getting use to… I suppose its like a Scot trying Guinness for the first time. The Balvenies and Aberlours stood out and I was naturally drawn to the Auchentoshan but I suppose having grown up with a sweet tooth I was always drawn back to Irish Pot.

GFR: Now the term “pot still whiskey” is something singular and very special, is it not?

BW: Pot Still (or Pot) is just a wonderful whiskey… born out of necessity! the necessity to reduce tax in the early 1800’s.

Nobody likes paying tax, not least a tax imposed by a foreign power. This was the attitude taken by the Irish Distilling community as they saw taxes being ratchet up on Irish Whiskey as it became the dominant world whiskey… the authorities saw there was great taxes to be made on this “Malt Barley”. In retaliation the Irish Distillers changed the Mash bill of 100% malt barley by introducing unmalted barley into the mix. The unmalted barley gave a spicy creamy texture to the whiskey which the Irish soon grew to love… the rest, as they say, is history… 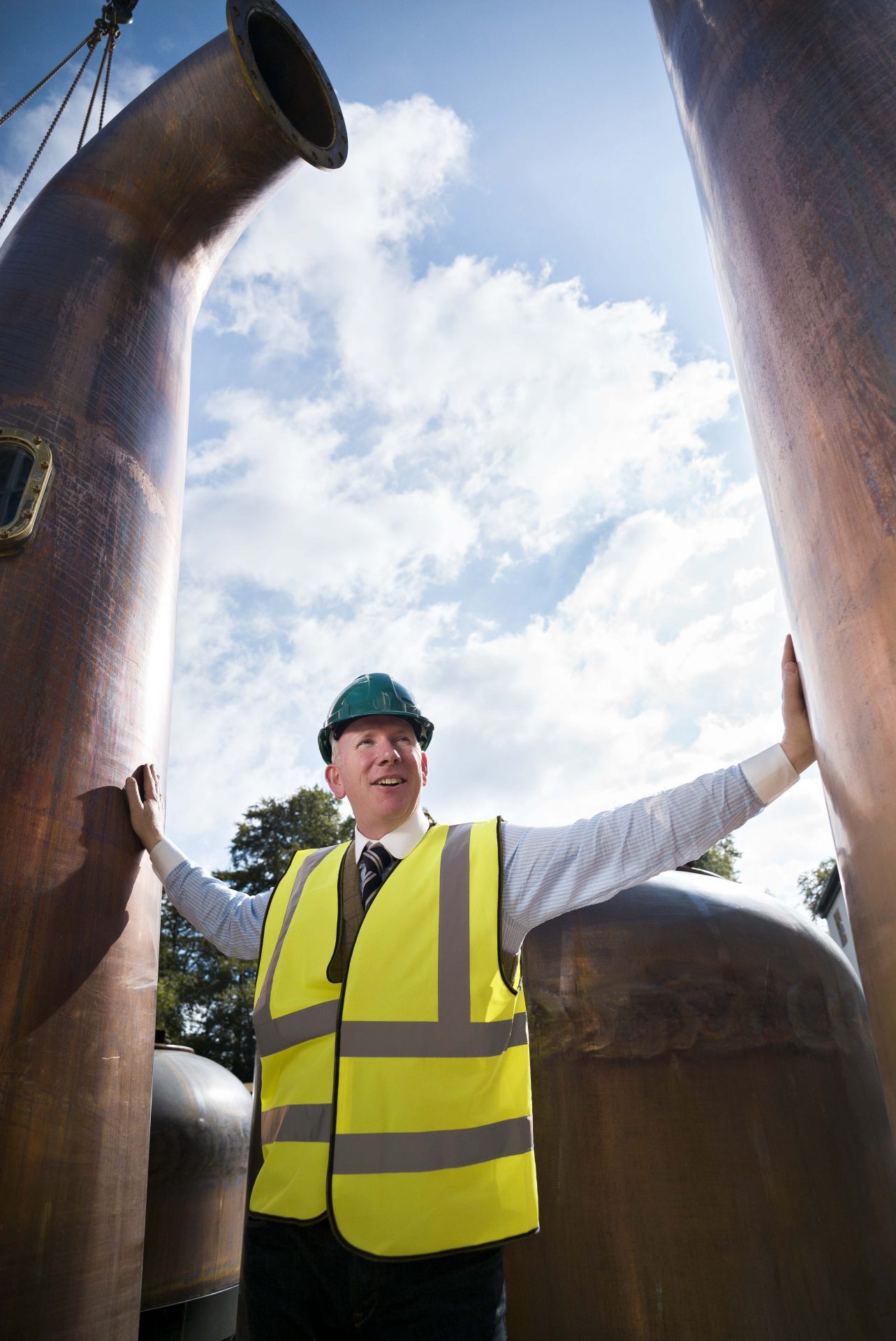 GFR: And I believe that use of the term is now delimited under international law?

BW: Just like Champagne, Irish Pot Still Whiskey has its own GI (Geographical Indication) and is protected by law both in Ireland and Internationally. It is, as we see it, “The Crown Jewels”

GFR: I’m aware that Walsh Whiskey indulges in a great deal of experimentation when it comes to different methods of ageing their whiskies. Perhaps you would like to tell about that side of the company…

BW: Well the Ageing methods cannot be altered, it has to be in a wood barrel with no interference thereafter. You hear about people applying wood chips etc… that’s illegal in Ireland. However where we can experiment is with the Wood.

In Ireland it can be any wood, but traditionally Oak is used. The Scots have mastered the art of working with Casks seasoned with various spirits, wines, fortified wines. That really has only happened in Ireland in the past  decade or so. We at Walsh Whiskey Distillery have been pushing this… the one I’m most excited about is our Casks seasoned with beautiful sweet Marsala wine down in Sicily in the Florio Winery. This is just yummy stuff.

GFR: And what is your personal philosophy on such matters? Do you have a personal preference when it it comes to the wood your tipple is aged within?

BW: My personal taste continues to change… and can be influenced by the seasons…. Autumn calls out for deep rich fruits (plum blackberry black currant) which I get from our Sherry Butts, Deepest winter needs a creamyness and warmth from Port Pipes, Spring a first fill bourbon barrel or even a Rum, and the Summer maybe a Malaga wine or Marsala from Sicily.

GFR: Now it’s not just oak that the Irish are permitted to use, is it? What other woods are used, and what do they bring to the glass?

BW: In Ireland the technical file for whiskey allows for the casks to be made from any wood. But reality is that Oak is used as it has been proven for a few thousand years to be the best. That said in Ireland they are continuing to experiment with other woods such as Beech Wood or evan Maple Wood.

GFR: I’m always curious about how one pairs foods with spirits… what have you learned throughout your years at dozens of whiskey dinners?… what can you teach us?

BW: The 1st rule for pairing foods and whiskies is that its your (the consumer) taste that counts… All the Chef/Sommelier can do is guide you and help educate your palette on the amazing flavours that can be tapped into.

The most successful whiskey dinners are those without wine! Yes you would be surprised at how many people look for wine after the first course and whiskey pairing. My advise is to stick with the program and trust your mentor. 5 courses and 5 whiskies will leave you amazed at the fabulous taste combinations and at the end of it all… your still standing… Why not try Writers Tears with blue cheese, poached pear or apple and roast pork.

GFR: That idea is making me feel rather hungry!

So with Whisky/Whiskey writer Jim Murray recently awarding a Canadian Whiskey his number one spot, where does that leave the Scots and the Irish?

BW: The Celtic cousins are continuing to raise the bar in terms of quality and choice. Our own Writers Tears is one of the highest rated Irish Whiskies with 93 points in Jim Murrays Whisky Bible. But that alone is not anything we wish to settle for. Awards are there to serve the buyer as a guide only because remember it is only one man (or a small team’s) view. The consumer must experiment and find his or her favourite tipple. I must say I really enjoyed visiting the LCBO shops and sampling at the bar… a very cost effective way to experiment.

GFR: What does the future have in store for Writers Tears and Walsh Whiskey?

BW: The Glass is surely half full… Writers Tears is still on allocation as demand exceed our stocks currently laid down. Unlike The Irishman whiskey which we are distributing in over 36 countries, we only have enough stock of Writers Tears in the 7 markets that we are currently in.

In Ontario Writers Tears is fast becoming the number 1 premium deluxe Irish Whiskey on sale at the LCBO. We have been asked by our partners in the USA for writers Tears for the past 5 years and it is only this year that we gave them a small allocation… needless to say they are not best pleased.

To help augment our stocks we have just completed building a new distillery which is Walsh Whiskey Distillery at Royal Oak. Its about 1 hour south of Dublin set deep in Irish countryside surrounded by barley fields, Oak Trees and the River Barrow. Here at Royal Oak we will be distilling all 3 styles of Irish Whiskey in the new year but we will have to wait for a few more years for this new distillate to mature into whiskey. One to watch out for in 2016 will be a Cask Strength release for Writers Tears. Also plans are well advanced to release a Single Malt Writers Tears Expression. Watch this space!

GFR: Thanks so much for your time, Bernard.

Writers Tears is represented in Ontario by Woodman Wines And Spirits.

Woodman Wines And Spirits are a Good Food Fighter.

Edinburgh-born/Toronto-based Sommelier, consultant, writer, judge, and educator Jamie Drummond is the Director of Programs/Editor of Good Food Revolution… And he may get a bottle of this stuff for the upcoming Canadian winter.

One Response to An Irish Whiskey Revolution with Writers Tears