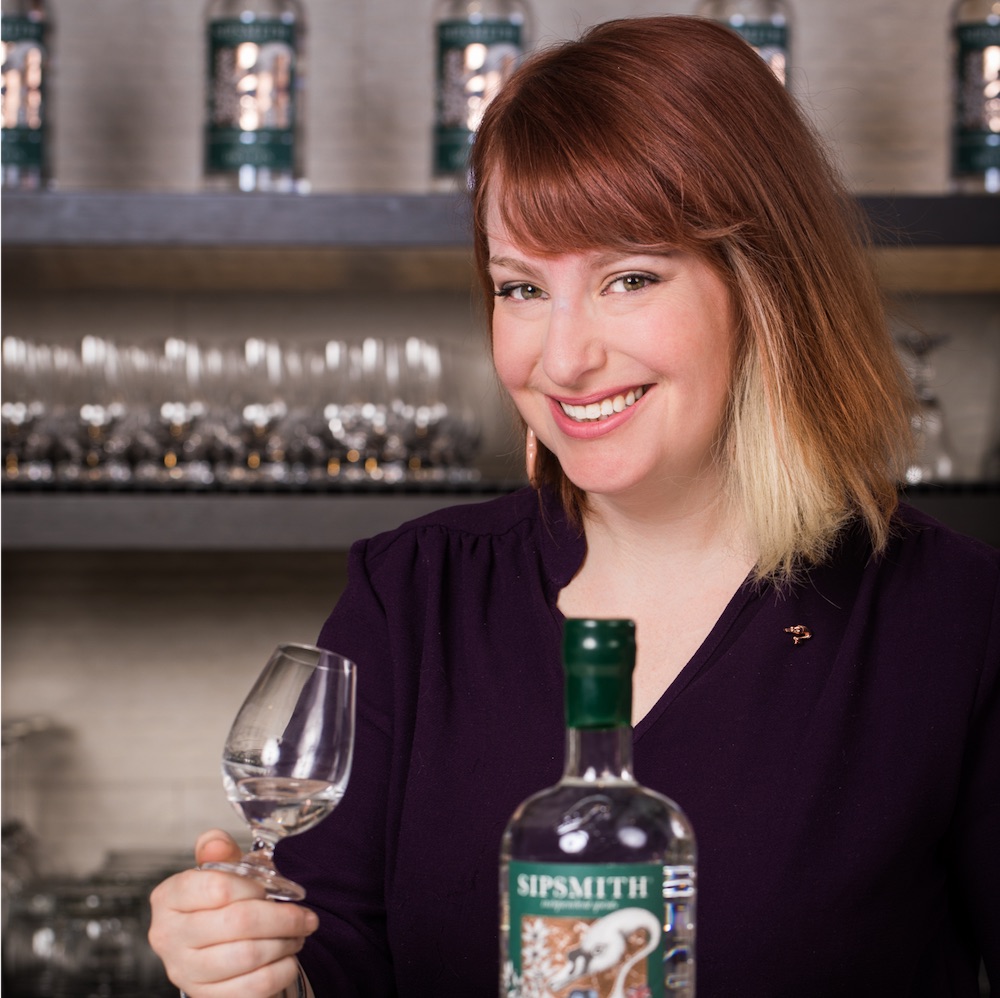 Keli Rivers is a Ginnoisseur, a veteran trans-continental bartender and the brand ambassador for the storied new wave London gin operation, Sipsmith. (See my Summer 2017 GFR interview with Sipsmith co-founder Sam Galsworthy for the story of how in 2009 Sipsmith became the first new gin distillery to be licensed in London in 200 years.) Sipsmith recently sent our a press release with the recipe for the perfect gin and tonic, which I’ve reproduced below. But, I suspected there might be more tot he story of a perfect G&T than the recipe, so I reached out to Rivers, who I’d met at a previous Sipsmith event, to get a deep dive into the favourite of summer drink in this interview, which we recently conducted by phone.

This interview has been edited for length, clarity, and style.

Good Food Revolution: Hi Keli, I’m calling because the Sipsmith people in Canada sent me a pitch with the recipe for a ‘perfect Gin & Tonic”. We don’t really do recipes at GFR, at least not on their own. We prefer to talk to people and find out what they think. I remember meeting you at another Sipsmith event and figured if anyone knew how to make a perfect G&T, and more importantly why, it would be you. So, how do you make a perfect gin and tonic?

Keli Rivers: Ah, well I think the gin and tonic is a very misunderstood cocktail. I think a lot of people who think they don’t like gin, think that because at some point in their life they’ve had a very bad gin and tonic…

Keli Rivers: Yeah, it’s the quintessential refreshing drink of the summer. And it’s a quick and easy way to quench your thirst: gin, tonic and maybe some citrus. However, there have been times where things can go wrong. When we talk about the perfect serve, or the perfect recipe, there are a few things that I try to say. First of all, use a gin that you love. We are lucky to have, in this time and place, so many options of gin to choose from. The other thing is your tonic. You really have to look at what you’re putting in with your gin. The most important thing about the tonic is the carbonation. You need much carbonation in there because what carbonation does is it brings citrus and floral notes from he glass up into your nose. It should tingle the nose and start the tasting even before you’ve taken a sip from your glass. So, carbonation is key and you see it in the new wave of tonics out there like Fever Tree, East Imperial, and Q. All of them seem to be designed to give you the perfect amount of tonic for a serving of gin, thus highlighting the carbonation so you never have to leave a little bit int he bottle to go flat.

Good Food Revolution: I hadn’t really thought go that, but you’re right. When I think about a gin and tonic the sensation of carbonation is really there.

Keli Rivers: The other thing about tonic, is the sugar. All tonics have quinine, which is bitter. It’s about the most bitter thing the human palate can ingest. It’s not very fun on it’s own, and going back to when they were giving quinine to British naval officers, they would mix it with cane sugar. Sugar makes the medicine go down, and it’s still true with tonic. So, you want to look at how much is in it, and where the sugar is coming from. Fever Tree, which Sipsmith thinks has the perfect combination of carbonation and quinine for our gin, uses cane sugar. Some others use agave, which might make the tonic a little more viscous and more round. Or, there are some lovely light tonics out there if sugar is an issue.

Keli Rivers: [Laughs.] No, not ideal. But I do want to repeat that sugar, or sweetener, is necessary because you don’t want something that is overly bitter and will affect your perception of the beverage. If the mix is too bitter, maybe flavoured with lime, and the gin is really floral, which can also come off as bitter on the palate, then you’ve got bitter on top of bitter on top of bitter, and you’ll probably blame the gin. Sugar will round that out and make the gin come from the front palate to the back palate and you’ll want to have another sip.

The last thing about the tonic is where the quinine is coming from. Up until World War Two, 90% of quinine was coming from Java, which was a Dutch colony. This was the grand superior of all the quinines, and the most bitter. Now we get quinine from all over. At Fever Tree it comes from the Congo, but they also produce it in Singapore, and there’s over thirty different styles of quinine ranging in bitterness. This is really going down a deep rabbit hole of what you’re drinking.

Good Food Revolution: That’s why I called you. What about the third ingredient?

Keli Rivers: This is the thing that spurred a lot of the gin and tonic revolution in places like Spain: the garnish. This where it gets fun, and there’s a kind of no holds barred, kitchen sink thing that can happen. It’s about figuring out what would perfectly pair with your otherwise perfectly made gin and tonic.

Good Food Revolution: But wait a minute: my partner at GFR is originally British, and he insists on lemon. Whereas, I like lime. So, who’s right?

Keli Rivers: There is no right or wrong, but the thing about it is, between the lemon and the lime how long have had limes? I mean the Persian lime. If you think about it, the original gin and tonics were probably being made with lemon. Or they could have been Key limes. It’s the battering agent of the pith of the citrus that is what the argument is really about.

Good Food Revolution: It sounds like you’re taking the side of the lemon…

Good Food Revolution: Sorry, just so I ‘m following, the thing were focusing on isn’t the tartness of the fruit’s flesh, but the bitterness of the pitch?

Keli Rivers: It’s the oils. So, if you don’t want something so bitter, have something that isn’t so pithy. It’s a balancing act, so if you have a very floral gin, maybe you want something stronger that’s going to pull the pendulum in the other direction.

Good Food Revolution: This is kind of fun because we’re really only talking about three ingredients, despite the layers of flavours in each one. I mean it’s not that hard to mix things up and experiment. It’s not too complicated.

Keli Rivers: It’s not complicated at all, which is why I say you can dress up your drink as much as you like or you can have it as simple as possible. That’s what’s great about the gin and tonic: there are so many ways you can do it, it’s a kind of Choose Your Own Adventure.

Good Food Revolution: What about ice?

Keli Rivers: Well, there you have to go back to carbonation. When you put ice into the drink, the size of the ice or how much there can allow the bubbles to be expended all at once. Let’s say you have crushed ice, all that surface area gives the bubbles that much more to bounce off of and explode. So you have a burst of carbonation right away, but as you drink it the carbonation will quickly run its course and by the end of the drink there will be very little carbonation. But let’s say you have one large ice cube, the carbonation might last longer, but it might not give you all those subtle gin notes at first. So, I believe a good ratio is a one to one that should give you enough surface area that the carbonation has something to bounce off of, but not too much where it’s going to die prematurely.

Good Food Revolution: OK, we’ve got that covered, then. The last thing I can think of is the glass. What about the glass?

Keli Rivers: It’s funny because I recently had the opportunity to be with some likeminded gin people in London at the end of last year. We went through 70 different pieces of glassware. It was a very studious and scientific approach to gin and tonics. We tried to find out what is the best glass. We did it based on aroma, carbonation, taste, and how it felt in the hand. The results were surprising. The copa, the big Spanish wine glass, did very well for aromatics but kind of failed in everything else: carbonation because there was too much ice, and I have quite small hands, so it felt weird in my hand, although it looks very pretty. The one that really stood out and won was the Riedel glass that’s designed for Coca-Cola. It’s shaped more like a Collins glass. You could put quite a bit of ice in it, if you put the gin in first, then added the tonic, the gin came right back up. It was perfect to get your nose into it, but not too much. And it felt good in the hand. If you don’t have those glasses, what I suggest and what I use un my house or at the Sipsmith Distillery is a Collins glass or a double rocks glass. You want a glass where the proportions of gin to tonic are right.

Good Food Revolution: What is the right proportion of gin to tonic?

Keli Rivers: Historically it would be about two to one, and that’s usually the best way to go. If you want to get fancy, you can make what’s called a ’sonic’, which was made popular in Tokyo. It’s one part gin, one part tonic and one part soda water.

Good Food Revolution: Does that bring out more gin flavours?

Keli Rivers: It could, but it’s more about if you don’t like the idea of too much tonic. So you have the properties of tonic that go well with the botanicals, but it doesn’t overwhelm your bitter centres. Also it’s a way of cutting down the sugar in tonic without the Aspartame of a light tonic.

Good Food Revolution: That sounds delicious and this has been great. Did we cover all the bases for a perfect gin and tonic?

Keli Rivers: I think so. My grandmother used to say, ‘Life is complicated, drinking shouldn’t be.’ A gin and tonic is just a good way to ease into the warmer weather. Or if you want to get some people together, you can get a bottle of gin, a few different tonics and some fruit and experiment to decide what makes the better gin and tonic.

Sipsmith London Dry Gin is available for $51.20 for a 750 ml bottle at The Liquor Control Board of Ontario retail stores.