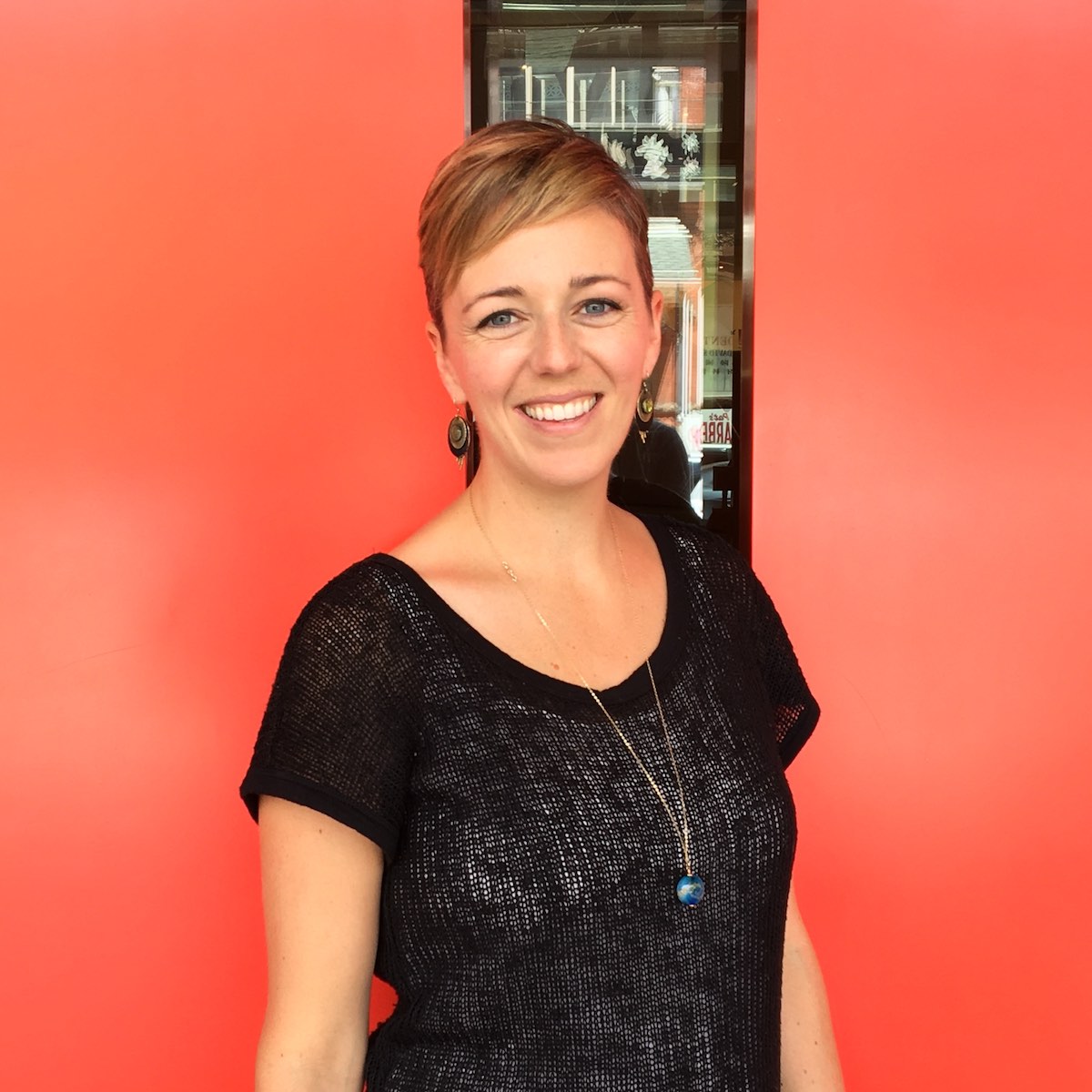 Why, I wondered, would a publisher send me a copy of a cookbook about a grocery store thousands of miles away in another country? It often seems slightly ridiculous when I interview a chef from a restaurant I haven’t dined at, but this seemed to take it to something of an extreme. But, something about the name of the book, The Berkeley Bowl Cookbook: Recipes Inspired by the Extraordinary Produce of California’s Most Iconic Market, and the colourful photography I could see on a picture of its cover made me curious, and when I started to get into the book, I was glad to read through it and give it a place of prominence on my kitchen bookshelf.

The Berkeley Bowl Cookbook is a collection of recipes (and pictures and stories) that feature an exotic plant ingredient. Some are exotic to the point that I had not heard of them. Some are exotic in the sense that I recognize them from fancy grocers, but weren’t sure what exactly they were or what to do with them. Some are familiar, but exotic enough that figuring out what to do with them benefits from a little research. As is often the case now, the book came out of a blog project, My Berkeley Bowl, founded and run by Laura McLivly, a registered dietician who works with underprivileged people on the Berkeley and Oakland side of the San Francisco Bay.

The story of the Berkeley Bowl store, blog and cookbook piqued my interest and I was eager to meet its author. Inquiries were made and it turned out that McLively would be in Toronto last month, for a friend’s wedding. We made a date to meet and conducted the interview below over a glass of Niagara Riesling. 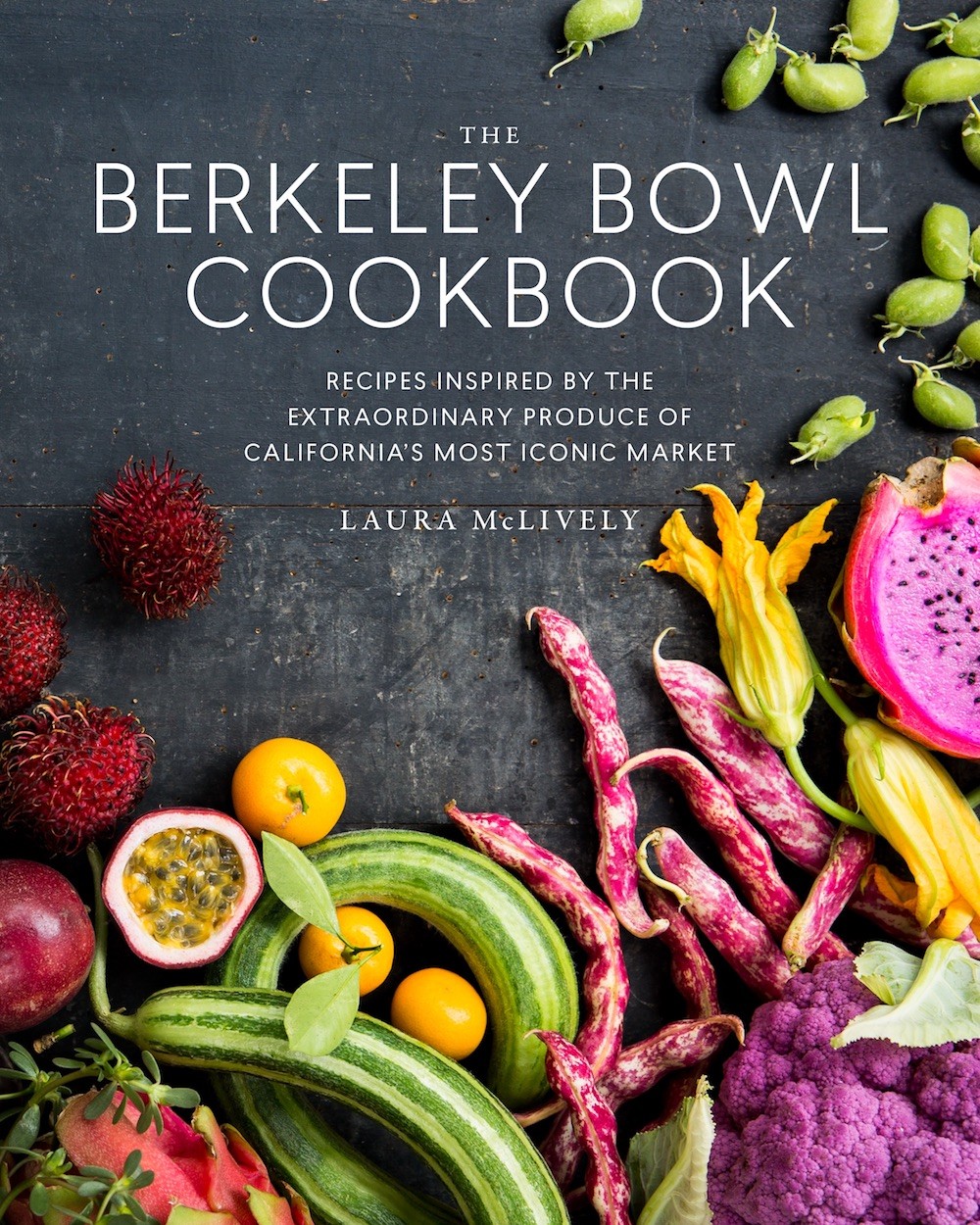 This interview has been edited for length, style and clarity. The photos below are from The Berkeley Bowl Cookbook and by Erin Scott.

Good Food Revolution: The Berkeley Bowl Cookbook is my favourite kind of cookbook because it’s going to become a reference book. Now that I have it, it will embolden me to go out to the grocery store and buy any kind of weird produce, because I know I can look it up in the book.

Laura McLively: I’m glad you like it. That was the intention. I like to think of it like a mushroom identification guide because it’s not a typical cookbook where you open it, pick a recipe and go to the store to buy the ingredients. It’s more like you take it to the farmers market and see what’s there. It’s good for us but it doesn’t mean anything really.

Good Food Revolution: My understanding is this book came out of a blog, your blog myberkeleybowl.com. How did you end up writing a blog about a grocery store?

Laura McLively: I started shopping at The Berkeley Bowl when I was in college. As freshman I went there for the first time and was totally blown away. This market, for those that haven’t had a chance to be there, is like a Disneyland for foodies. You walk in you don’t know which direction to run first. There’s so much produce, and not just these strange and unfamiliar things, even with commonplace things like apples, there’s maybe 40 varieties. I loved it for that reason but I would see all these strange tropical fruits and exotic things and I always felt like I didn’t have permission to take them home. I would admire them, but then move on to my peppers and zucchini. It wasn’t until a decade later that I moved to Spain with my husband, and there I worked at a municipal market… Do you want to interrupt? 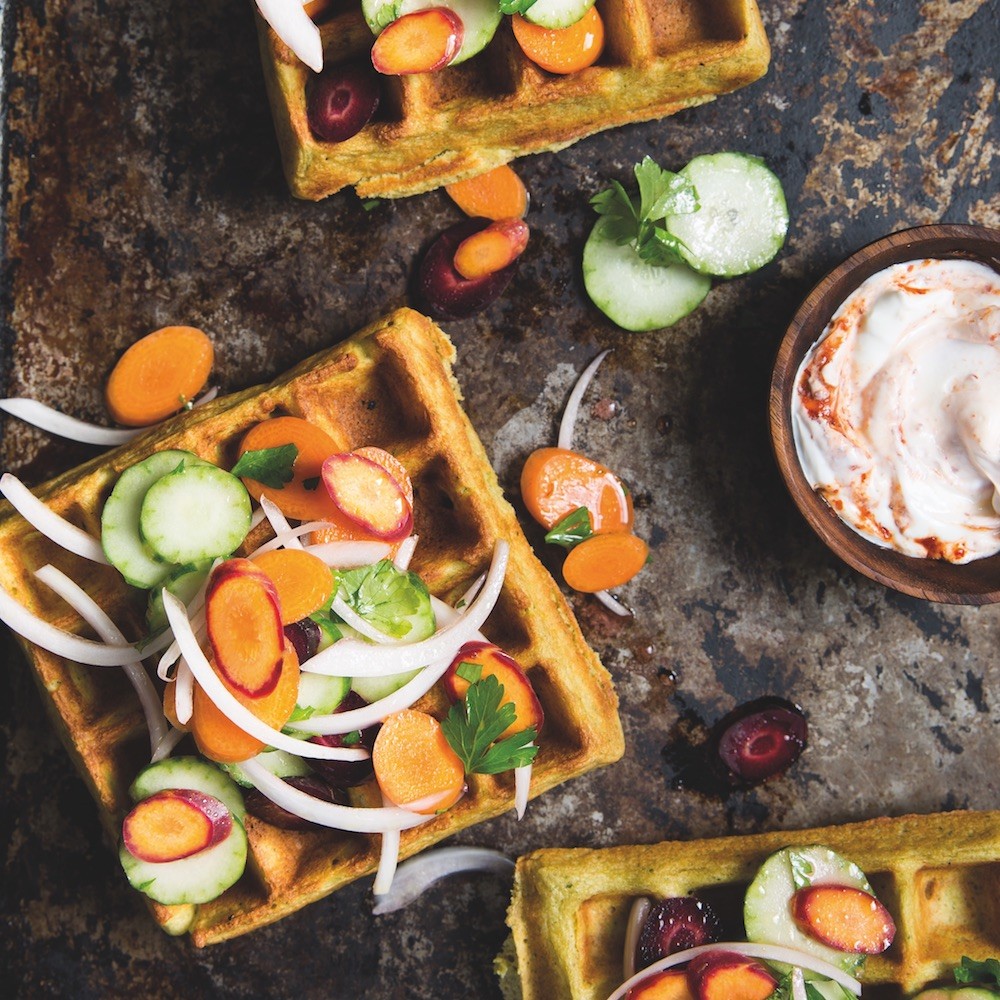 Good Food Revolution: Yes, sorry: I just wanted to confirm that by profession you are a registered dietician.

Laura McLively: Yes, and while I was in Spain I was doing home visit nutrition sessions for older folks who were underprivileged. As part of that job, we also volunteered in the municipal market helping older folks go do their shopping and walk them home because they were finding that these people were buying just bread; if you’re walking home with your cane produce can be heavy. So we were there to walk them through the market and take them home. It was so cool because, these older people in Spain, all they want to do is tell you what they’re going to cook, and their secret in their recipes. I was talking food all day!

One of my fellow volunteers was equally excited about food and he just got a kick out of how excited I got anytime I saw something new come into the market that I hadn’t seen before, like a crazy looking clam, or something that looks like a shrimp but it’s not a shrimp. He suggested we start a cooking club. So once a week we would choose just one thing that I’d never cooked with before, we’d pull together the other ingredients and we’d go back to his house and we’d cook it. It was really, really fun. I just had so much fun expanding my comfort zone and pushing my limits.

When I returned home, which was about three years ago, I missed that. And when I went back to Berkeley Bowl for the hundredth time it was in a new light, in this new context of having this yearning to continue exploring new foods. So when I walked in the market and I saw all these things I didn’t recognize all of a suddenly it was like I had permission to pick up new things. I could experiment and have fun with it because there are no rules in cooking and just because I did grow up cooking with something doesn’t mean it’s off limits. 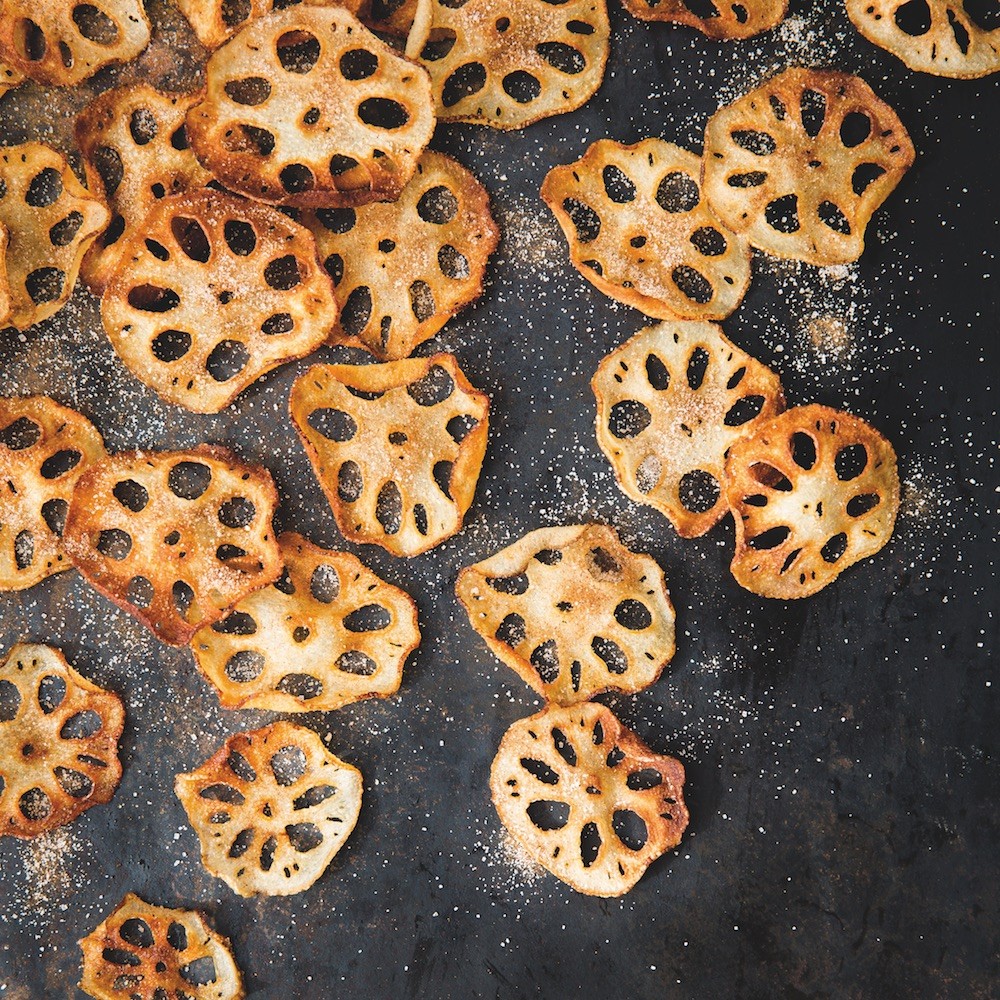 Actually I guess I didn’t answer your question. So, my first time back at The Berkeley Bowl, I saw this [points to a strange looking, orange coloured fruit in the book]. I describe this as the neon orange hand grenade from outerspace. It’s covered in spikes and, when you slice into it, it oozes lime green juice. It’s called an African Horned Melon. I took it home and cut into it: it smelled like banana, melon, and lime all at once. This was just for fun at this point, so I decided to make a cocktail from it. And I thought, that was cool experience, I think I want to do this for every item in the store. And then I thought, why not blog about it, it’s kind of a finite project. So I started blogging but it really was just for fun: I didn’t even know to tag a post so it’s searchable. I was just putting up my recipe and the story of how I created it. It wasn’t until maybe four months into the project a journalist at a local newspaper somehow found it and did a story. Then, the Yusuda family, the owners of The Berkeley Bowl found out about it.

Good Food Revolution: Was that a good or bad thing?

Laura McLively: Well, I got an invitation from them to come their staff meeting and I thought it was a cease and desist sort of thing because I had used their name in my blog: it’s called My Berkeley Bowl. I thought they were going to ask me to change the name. But, no. They are a really lovely Japanese couple in their 80s and they were just excited that I was a fan of their store and wanted to treat me to breakfast and introduce me to their staff.

Good Food Revolution: Then, I am going to assume your shopping suddenly got a lot better. Would the staff now start pointing things out for you try? Hey Laura, check this out.

Laura McLively: That’s exactly right. From then on they offered me free produce for anything I was putting on the blog. And they give me a kind of inside number for their produce buyer, which was especially good when we were putting together the cookbook because we really had to get all of these really hard to find foods all at once for the photo shoots; a huge undertaking. We had to work very closely with The Berkeley Bowl staff. 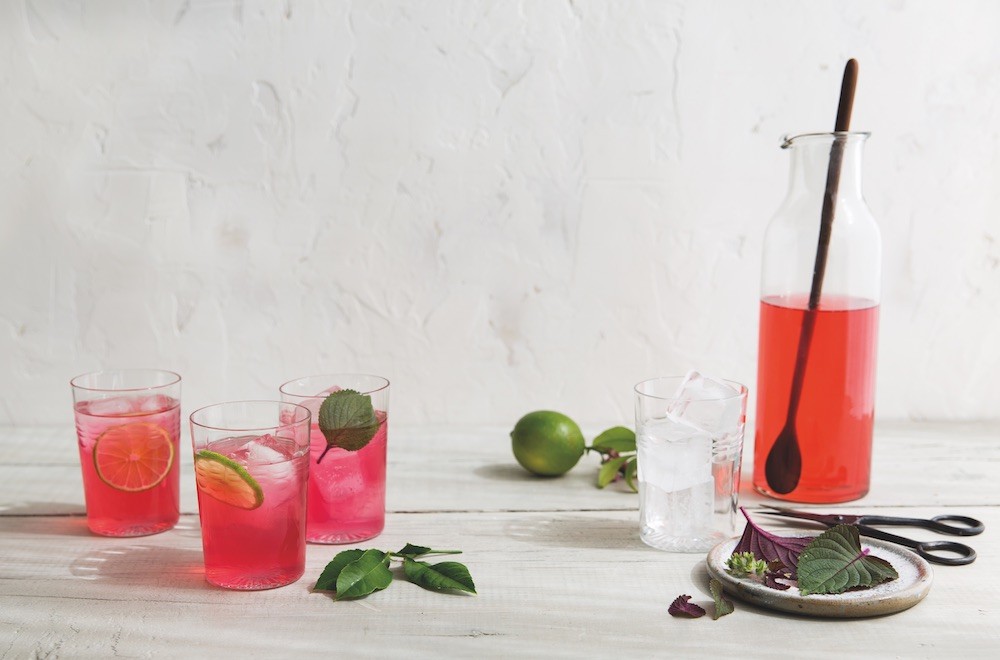 Good Food Revolution: You write about Mr. Yasuda sourcing things in the book. It sounds like some of their produce comes from farmers who come at the backdoor, but he also gets up at the crack of dawn to go to San Francisco to see what’s available form the wholesalers. It sounds like maybe they don’t always know what they’re going to get each day.

Laura McLively: They sometimes don’t know. There is this purple shiso that I really like and I use a lot because it makes this beautiful pink limeade; it turns pink when you add the lime. It’s clear at first when you steep the leaves, but then the acidity activates the pigment and makes a bright fuchsia colour. Anyway, I have been using it in little demos I’m doing it, but from one day to the next it won’t be there. These are really niche items and [Mr. Yasuda] doesn’t know if they’ll have them or not. That’s one of the things I think that makes the store so unique. It’s that it has the size and scale of a large grocery store but it’s still a mom and pop shop. He, himself, in his 80s is going to these wholesalers every day at two thirty in the morning. He goes up three different wholesalers and then on top of that they contract and buy directly from farmers. So it’s sort of like a farmer’s market, an emporium and a produce wholesaler all in one.

Good Food Revolution: And it works, I guess, because in Berkeley there’s an audience that’s interesting and interested in these exotic foods?

Laura McLively: I think you nailed it on the head. I think it’s a market that maybe wouldn’t be able to exist in many other places. I don’t want to quote myself, but I think I mention in the introduction to the book that there are a hundred and twelve languages spoken in Berkeley. So with that many many cultures represented, of course, if you carry elephant ear plant, then someone is going to want it. And we have a huge Latino community who are looking for things like prickly pear cactus. And then on top of that people like me, who maybe aren’t part of these these minority cultures, but are influenced just by living in that area. And actually that’s part of the way I got into recipe development. It was once I came to Berkeley for college, there were so many ethnic restaurants. I grew up in Sonoma County. We have a large Latino population but I don’t remember eating a lot of ethnic restaurants growing up apart from the Latin influence. So once I came to Berkeley for college, I was, for the first time, having Vietnamese food and Cambodian and Nepalese. I would get so excited to taste it, and then I would want to go back to my apartment and try and recreate it. That’s what got me shopping at The Bowl a lot, because I knew they would have that weird spice I needed, or they’ll have that exotic mushroom that was featured in that broth, or whatever. You can really find everything there and I tried to get as much as I could into the book.