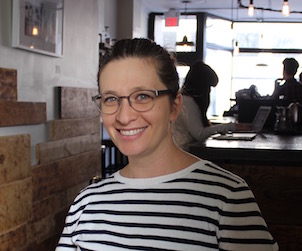 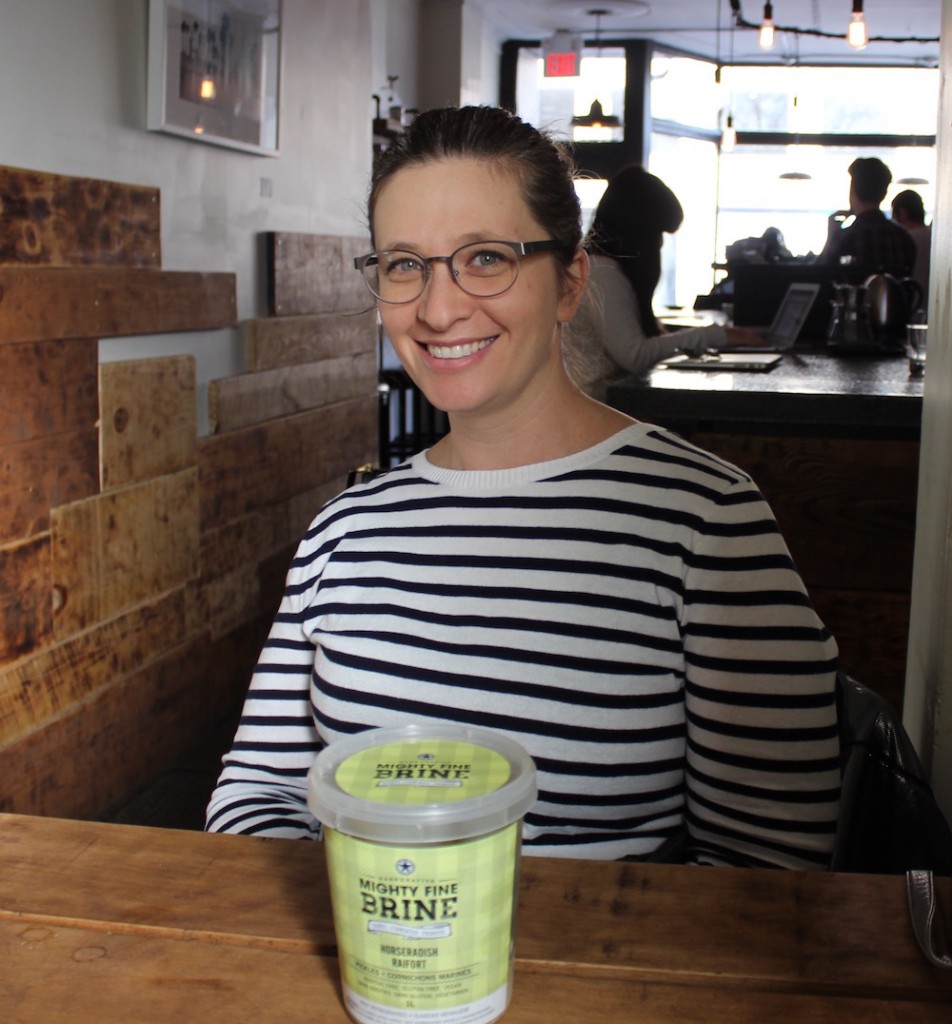 Dina Rock married a Canadian and moved from New York to Toronto. All was fine in her adopted home, except one thing: she couldn’t find a decent pickle. So, Rock (whose first name is pronounced “Deena”) made her own. After settling in Toronto and starting a family, Rock quit her government job and took time off to decide what to do instead. A year later, her pickle company Mighty Fine Brine is one of the hottest new independent food brands in the city and her pickles, sauerkraut and condiments are turning up on all kinds of gourmet store shelves across the GTA.

I’ll declare my bias: I think Mighty Fine Brine pickles are absolutely delicious and I am particularly fond of the Chili Garlic ones. This could change, since when I met her recently for the interview below, Rock brought a tub of her newest flavour: Horseradish. So good. What I particularly like is that they are not sweet. Her base pickle is salty, sour and full of umami. These are deeply satisfying pickles, and I became determined to find out more about them and the woman who makes them. Here’s what I found out.

This interview has been edited for style and clarity. 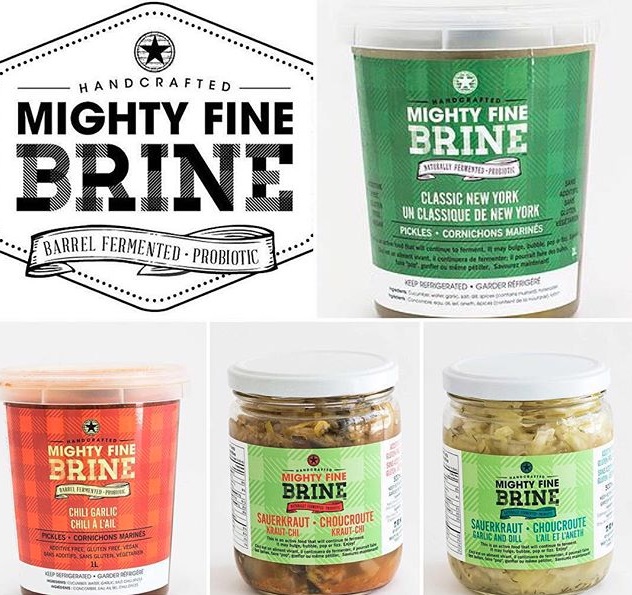 Good Food Revolution: Tell me about your pickles!

Dina Rock: It’s my grandfather’s original recipe – a classically New York pickle. I come from a long line of New York meat purveying folk. One grandfather was a butcher and one had a Jewish deli. These are the pickles they had at the deli. The deli closed before I was born, but they were something my grandmother continued to make. I didn’t start making them until I moved to Canada – I had to get my father to dig up the recipe. I would make them because I couldn’t find any pickles here that I loved. My grandfather’s reminded me of home, so I would make them every year in the summertime.

GFR: Were there really no decent Canadian pickles out there?

DR: I am going to take the Fifth Amendment on that! Is that allowed in Canada?

There was nothing for me that tasted like the pickles I loved and grew up eating. I don’t just mean my grandfather’s. The deli pickle is the staple of the New York Jews’ cuisine. So, it was about nostalgia and homesickness. I was never considering making a career out of pickles.

GFR: What did you do before you got into pickles?

DR: I have a background in public health.

GFR: That is a reassuring background for a food producer to have!

DR: Yes! My public health inspector and I get along very well. Sometimes I call him up with questions.

GFR: So what happened? How did Mighty Fine Brine come to be?

DR: I knew I wanted to something creative, and I had always done food preservation for my family; we grow a huge garden and we make jam and make pickles every year. I have a six year old and a three year old, and I ran a big Facebook group all about feeding and cooking with your children. So, healthy eating was always an interest for me. It was a very natural move from health policy to this: it’s a way of feeding my family in a clean way.

You were asking about my pickles. Well, what makes them different from so many of the other pickles out there is that they’re not full of junk.

GFR: But then how do you differentiate yourself? Couldn’t anyone just get some salt and water and make pickles?

DR: Sure. Anyone could do it, but not everyone does. And I have my own secret blend of pickle spice – my grandfather’s secret formula. I blend it myself, by myself. I actually buy my ingredients from a couple of different spice people because I don’t want anyone to know my recipe. It’s the base picking spice for everything. I’ll add other spices, depending on what the flavour is. And I do sauerkrauts and some other things.

GFR: Fermented foods are very much on trend these days.

DR: Yeah. I got lucky in terms of the whole  interest in fermented foods, which was really starting to happen around the time I decided to start Mighty Fine Brine. But for me it’s like: I have been eating them my whole life. I had no idea they were good for me! It’s a bonus. I mean, the pro-biotic bacteria is great, but it’s really just about a yummy pickle.

GFR: Business seems good. By your website, I see you can buy them across the city.

DR: Yes, and we just started supplying to our first restaurant, Lisa Marie, which I am really excited about.

GFR: And do you have your own facility? Is there a pickle factory?

DR: Yes, I have my own space in Etobicoke. I require a lot of refrigeration, so early on I had to get my own space. I actually rent it out to other small producers, not for profit but just so there’s a place where small food businesses can start. I’m actually starting to look for a bigger space to keep up with our growth. I have to use some off-site refrigeration now.

GFR: And you’re enjoying it, being in the food business?

DR: If this doesn’t work out for some reason, I know that there’s no other industry I want to be in. It’s so much fun. I’ve learned so much, and I have met so many awesome people. It’s such a creative community. It’s great. 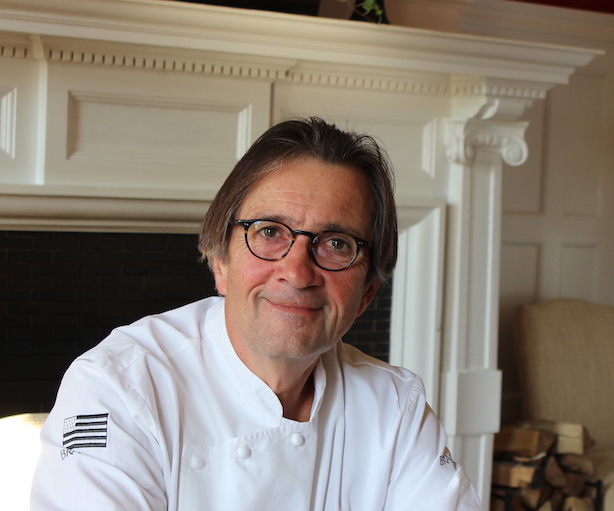 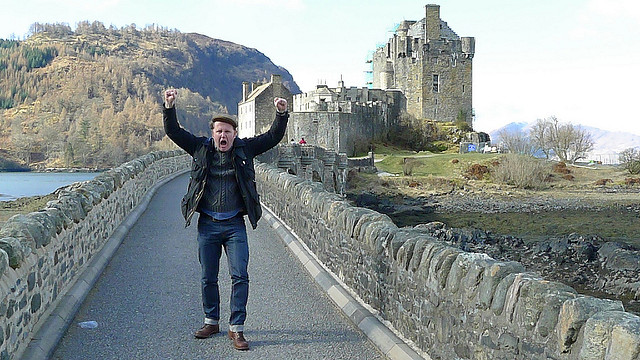 The Extraordinary World Of Ultra-Rare Whisky

The Joy of Community Cooking