Located just outside of Stratford, Ontario, the Perth Pork Products is owned and operated by Fred and Ingrid de Martines and their children. Originally from The Netherlands, they bought the farm in 1979. Fred himself is a certified swine specialist and on May 3rd 2009 in Toronto, the breed awarded the distinction of Magister Porcarius by Carlo Petrini, founder of the World Slow Food Movement.

It was at this event as well, that the Tamworth was inducted into the Canadian Slow Food Movement’s Ark of Taste. It is the 11th item on the Canadian Ark and the first pig. The Slow Food Ark of Taste was established on 1996 to catalogue and raise awareness about particularly rare and endangered food. By 2008, the Tamworth was moved off Rare Breeds ‘critical’ list and into their ‘endangered’ category.

To buy and eat the Tamworth then, may seem counter-productive but to save the Tamworth, we must demand it. If people demand the Tamworth, then we will be able to help create a viable future for this pig and its farmers. ANd that’s where George comes in. The restaurant industry plays a vital and responsible role in bringing the right products to the table. Our chef, Lorenzo Loseto, has always been an advocate for seasonal, sustainable product with menus that reflect what is naturally available to us in its prime. Farmers are stewards of the land that we all live off. It follows naturally that we set an example, through our craft, of how important it is to be what Slow Food calls “co-producers” and not merely consumers, unconnected to the people who grow what we eat. In fact, George restaurant and Fred deMartines will be jointly hosting the August edition of the Slow Food Dinner series, with a portion of the proceeds going to the delegates elected for Terra Madre day 2010.

Chef de Partie Joel MacDonald has been with George Restaurant for almost three years now. He has certainly made his way around this kitchen,  inspiring his fellow staff with his fresh take and love for good food. It is no secret though, that perhaps Joel’s true love, is charcuterie. With several fledgling attempts of a belly here and a ham there (let’s not forget the crispy pig ears), he has earned the trust and confidence of Chef Loseto. Just as importantly, he has earned himself a Tamworth. Chef has promised him the whole pig for charcuterie. Carte blanche!

I followed him around with my camera and note book from the day the pig arrived. HEre is the first instalment of our Tamworth Diary.
February 3rd

The Tamworth is on its way. After several phone calls and some careful orchestration ( you want to have the time to take care of a whole pig when it comes), the day has arrived. Some of us are particularly excited; Joel is eager to get his ha(m)s on this particular specimen. Chef has promised him the whole pig to practice charcuterie on. Well, almost the whole pig. The loins and tenderloins will most definitely be set aside for the George dinner menu. Perfect timing; the dinner staff have just arrived and have started to prep when in walks Fred and his…friend. The pig is a beauty to behold; beautiful colour with just the barest hints of the russet hair that has been burned off the carcass. The cooks scurry to move away chopping boards and hotel pans to make way for this yearling that is probably in the 100kg range.

The pig takes up the whole of the back table causing most of the cooks to look in amazement. What a treat; it is not often that one gets a chance to see the entire animal before you and what a challenge this is to be!

Joel tries to conceal his excitement as he makes his way over to the Tamworth.

Clearing one of the rolling tables, he shimmies the hog over and wheels it into the kitchen elevator for a trip to the basement; his workshop. I can tell the rest of the cooks are almost sorry to lose sight of the beast so quickly.

Within moments, Joel has set up The Station; a double cutting board arrangement, knives and his suddenly feeble-looking hack saw. The task of breaking down an entire pig is certainly challenging and crucial to the process, is knowing the desired end product.

And so it begins.

Feeling for the knee and ankle and hip joints, Joel counts the vertebrae and uses his boning knife to mark the places he is going to saw. Over the next 45 minutes, the carcass is broken down into its primal cuts and is textbook perfect. He removes the ears, snout, cheeks and tongue from the two halves of the head, and the trotters from the legs. These prized variety meats get to soak it out in simple brine. Once done, the loins and tenderloins are removed from the flanks. “It feels like my trade mark error is to forget to remove the tenderloin before I remove the hind quarter, or ham, and saddle or whatever I might be breaking down. Hopefully I remember next time.” A slight setback but the sheer promise of what is to come spurs him on.

Chef wants one of the hams. “You can’t have it all!” Slightly disappointed at the loss of a leg, his morale is boosted as soon as starts to assemble all the ingredients. It will be a full cure confit so that is some more salting that has to get done. Today, the goal is to remove the rest of the bones and salt all the remaining meat. The pressure is on; lunch is busy and by the time he is shut down, Joel has to cram as much as he can into 3 hours. Chef’s ham is getting cured bone in, hip attached. That’s a huge time saver and though it takes more space, will give a better result. The confit gets salted with a mix of thyme, bay, garlic, black pepper, and sage. It will cure dry for several days before a few bottles of white wine are added. It’s a technique Joel has just come across and is eager to try.

Originally, the plan called for the back fat to be used in the sausages and terrine that are to come, but once you get a look at all the pure, perfectly white fat, you’re absolutely sure that you have to make lardo. It has been a recurring request in the kitchen, and if it works it’s going to be an excellent expression of the Tamworth. Joel is thrilled! The seasoning he chooses is very simple, just freshly toasted black pepper, salt, sugar and sage.

He applies the same seasoning to the cheeks for guanciale. Once the ribs are removed, the belly gets a more elaborate seasoning. Heavy African influence as the mix is derived from a biltong recipe with the additions of paprika and sumac. This is Joel’s pancetta recipe, and Chef has asked him to repeat it on the Tamworth bellies.

Boning out both shoulders, and removing all the connective tissue between the muscles is time consuming and its getting late. The difference between sausages made with properly and improperly trimmed meat is like night and day. Few things are more upsetting than a grisly sausage, and Toronto seems to be flooded with them these days. All the shoulder meat is salted by weight; just carefully measured salt and sugar for now. One ham left to deal with.

First thing in the morning, Joel bones out the remaining ham. He will trim it after service, but he needs to get the bones roasting so that the stock will be ready on Monday. The smell of roasting pork fills the kitchen.

After service he carefully trims the meat from the leg and hip. He is making coppa and does not want any sinew to spoil the slices. The meat will remain in large chunks, with long strips of back fat from the top of the ham running through the length of the sausage. He will be stuffing it into hog bungs once it has had a chance for the meat to cure through.

He seasons the shoulder meat, reserving one kilo for terrine. The terrine is his main goal today, but time is against him. With all the meat seasoned it is perfectly fine to hold over the weekend. He prefers to devote all his time to this pig, but that is not an option. He purees the ground meat with a panade of brioche and sun choke infused cream, fat back, pate spice (cinnamon, coriander, mace, and white pepper) and pack it in ice for the weekend. “I think I’ve figured out a way of getting a soft quail yolk into the middle of a terrine.” but finding out if he’s right will have to wait for Monday. Half of the ground shoulder is seasoned with red wine, white pepper, whole black peppercorns, garlic, and black currants. The other half is seasoned with red wine, paprika, red chili flakes, garlic, and whole black peppercorns. As with any dry sausage, there’s always a risk of failure. But Joel is clearly excited to see how these two Genoa Salamis will turn out. We only manage to finish the sweet version today. A lucky stagiere assists Joel today; he works the sausage press so Joel can continue making the forcemeat. You want to work as quickly as possible with all your meat as cold as possible. Ice everything down and the cool air in the basement , I mean, workshop, is ideal .

Stuffing the hot salami will have to wait until Tuesday.

Reducing the pork stock down to a jus is the perfect thing to set jellied meats in. Fortunately it doesn’t require much attention as we have a long prep list in the kitchen today. Joel will not have too much time to assemble the terrine today. He is rolling it in plastic wrap and cooking it in a water bath, seventy degrees for one hour. The garnishes are the quail eggs for one terrine and marinated artichokes in the other, with black trumpet mushrooms providing added texture, flavor and colour. After cooking, he puts the terrines in ice water to chill and then dry and into the fridge, resisting the temptation to cut into them tonight.

Success! The yolks are a little softer then we would have liked, but an extra ten minutes of cooking should set that right in the future. It is first thing in the morning and Chef rarely likes to eat meat as soon as he gets in from the market. Today he makes an exception.

After service, Joel returns to the sausage. Irritation! He has forgotten to add the bacterial culture that will let the sausage ferment. There is no quick-fix. He needs to remix the sweet salami. Stripping them from their casings, beef middles in this case, he adds the bloomed starter culture along with a little more red wine to moisturize the partially dry sausage. He does not want air pockets developing when he remixes. He adds the other half of the culture to the hot version, and stuff both sausages. Using only natural casings has its down side; there are no straight runs in an intestine, its all curves and bends and bulges. Hanging such sausages is like setting up traction for a snake. Fun.

Follow Joel as he continue to cure their pig in next week’s GFR. Fiona Lim is the Executive Sous Chef at George. 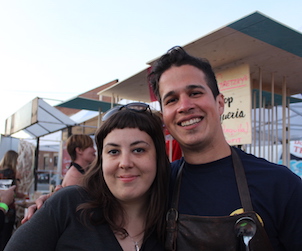 A Fundraiser for Peabody 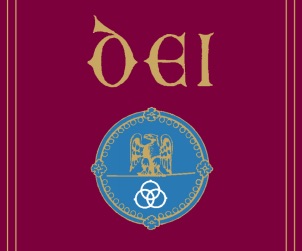