Good Fun at the Terroir Run

Malcolm Jolley had a great time in PEC at the Terroir Run. 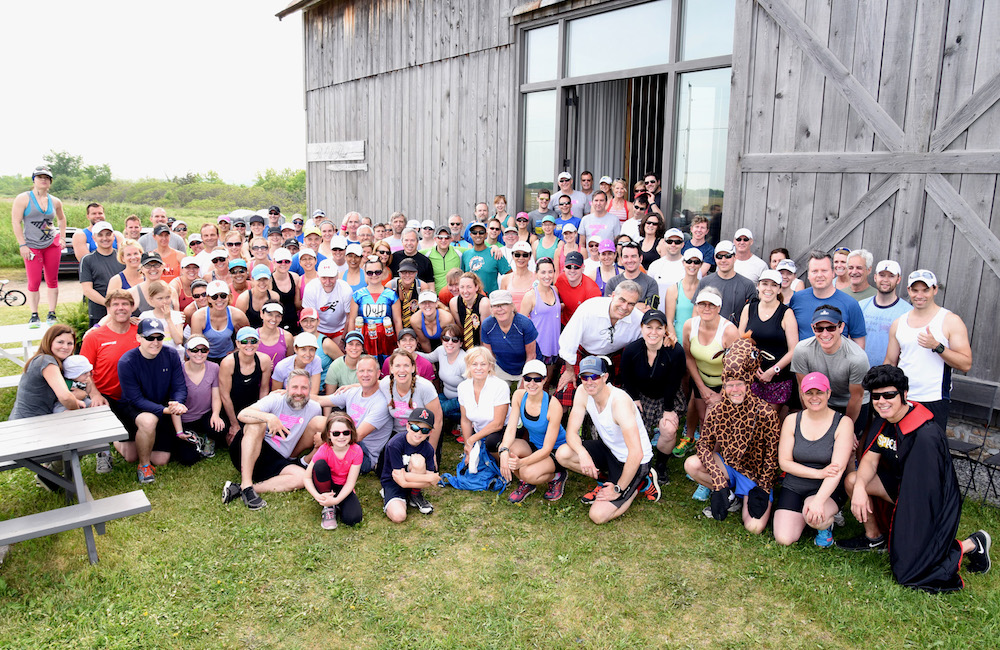 All of the Terroir Runners at The Old Third right before the starting gun. Photo: Jo Dickins

On Saturday, May 28, I set out from the Old Third Winery with a hundred odd spandex and lycra wearing winos to participate in the 2016 Terroir Run. We headed west on Closson Road towards Closson Chase then past The Grange of Prince Edward making left near Hinterland and the new County Road Brewery. It was another right onto Greer Road, marked by a water station (with a DJ) set up by Karlo Estates and the last stretch to Norman Hardie’s winery, where I arrived one hour and three minutes after the sounding of the starting gun to complete my first 10K run. Water ensued, followed by wine, cider, pizza and a few Buddha Dogs, in more or less that order. 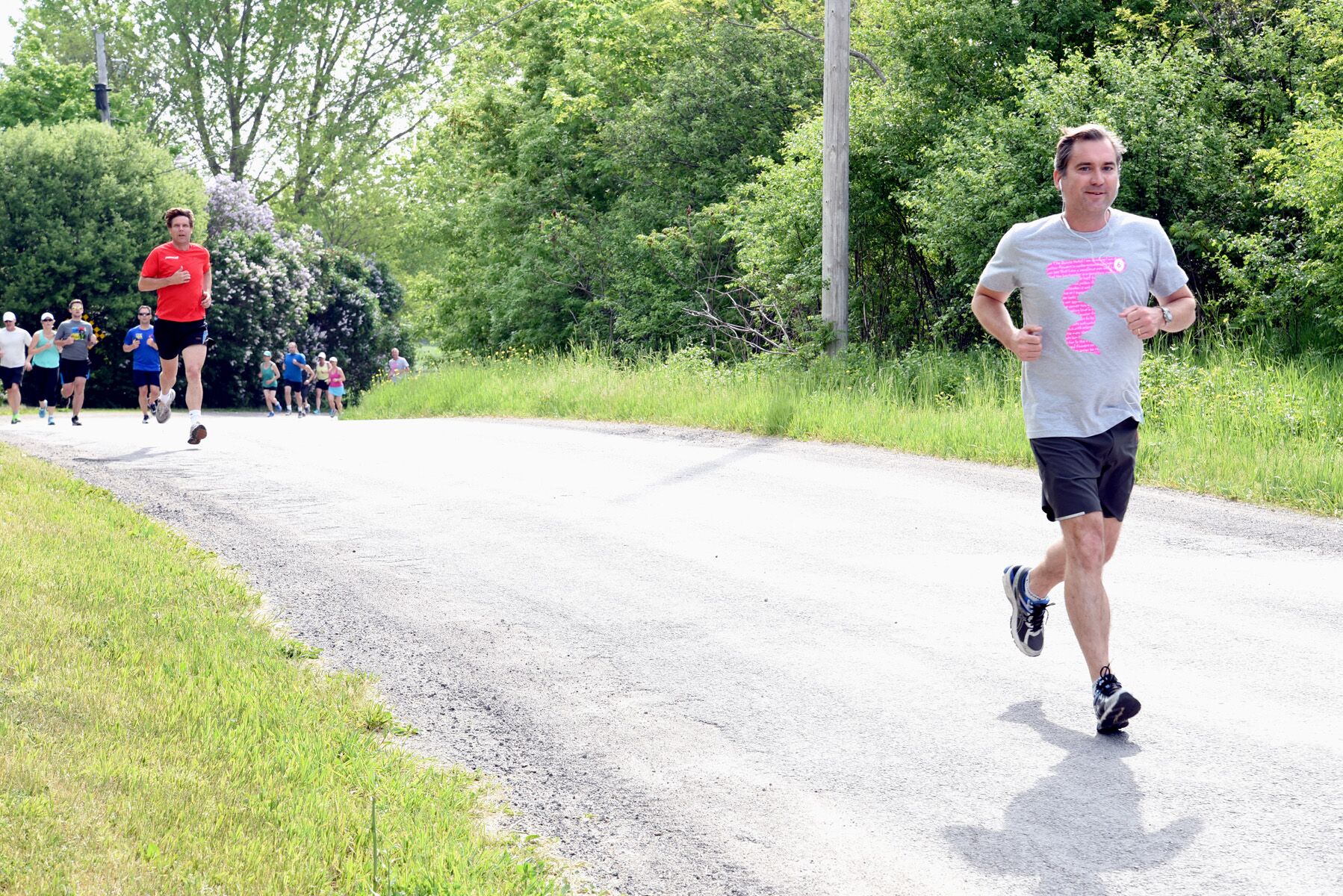 I like this shot of the run by Jo Dickins because it looks like I’m winning it. (There were a lot of people ahead of me.)

The running part of the Terroir Run is not exactly “fun”, although it has its discreet pleasures like the vineyard and farmers’ fields scenery and the perfume of the lilac bushes that line much of the route. In any event, nearly everything else about the Terroir Run and Prince Edward County was and is fun. Here’s some of the things my fellow Terroir Runners and me enjoyed before, after and during getting a little exercise… 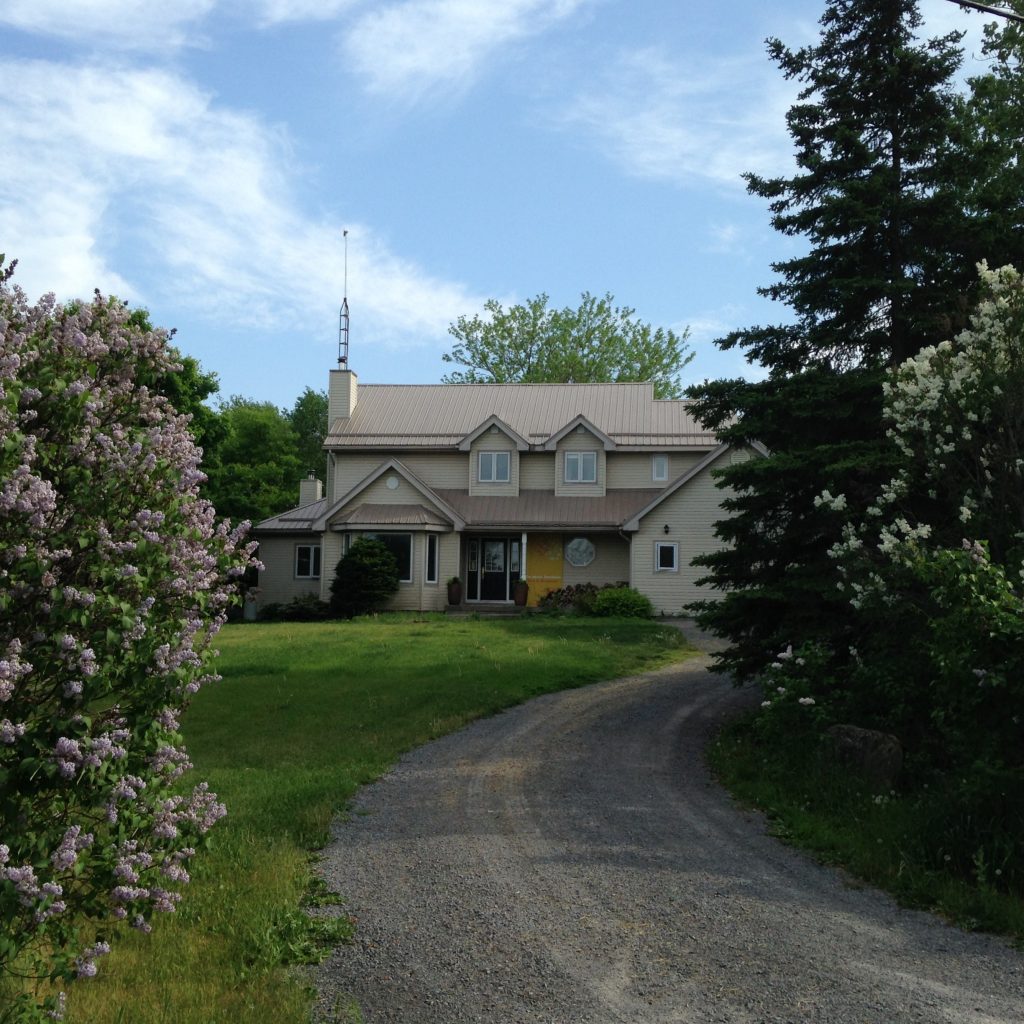 The Mystic Dandelion B&B tucked into the lilac bushes of Prince Edward County.

Prince Edward County has all manner of accommodations from the luxurious Drake Devonshire to The Manse in Picton and a good number of Bed And Breakfasts. The County’s tourism office was kind enough to put my wife and I up at a new B&B close to most of the County’s wine country, The Mystic Dandelion. The Mystic Dandelion is around the corner from Huff Estates, where co-owner Chef Sebastien Schwab oversees the winery’s dining program. Schwab’s wife and innkeeping partner Sylvia Cambria spent two decades in the hotel business before moving to Prince Edward County and converting their country home into a B&B. The Mystic Dandelion is really more like a very small (three bedroom) hotel, with en suite bathrooms and amenities like a guest fridge and whatever else a modern traveler would require. It also has common sitting areas, a pretty woodland garden, a deck, a gazebo and a swimming pool. The Mystic Dandelion features a restaurant grade kitchen for Chef Schwab’s catering business and Sylvia makes an insanely good (and bountiful) two course breakfast for her guests. If it can be found in the County, it’s from the County on Sylvia’s table. We enjoyed her own homemade yoghurt and jams, sausages from Angelo Bean, fresh asparagus and strawberries and herbs from all around PEC. Everything you could imagine. 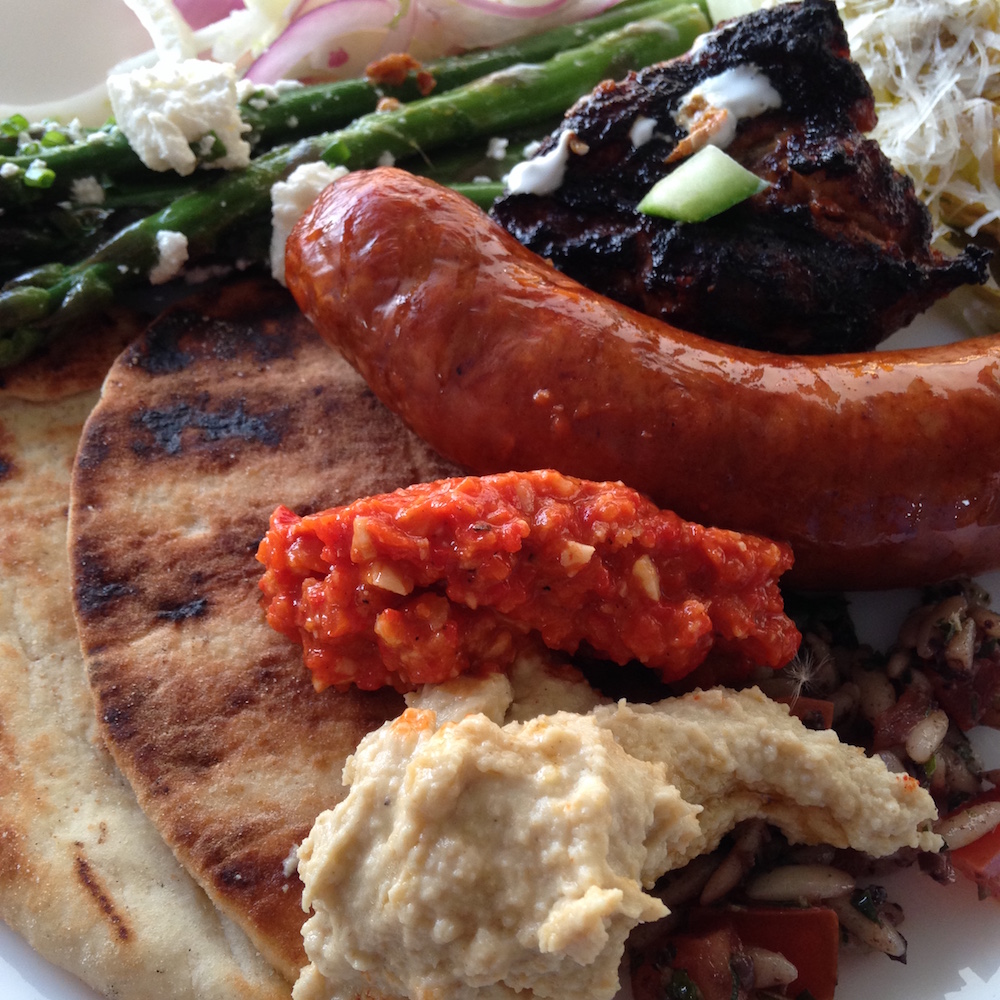 The Terroir Run is more than a run, it’s a social event. Part of the festivities is a pre-run dinner the night before. In this case, we runners were hosted by County Road Brewery. It’s a brand new venture by the folks who pioneered sparkling wine in the County, husband and wife team Jonas Newman and Vicki Samaras of Hinterland  – the brewery has been built next to the winery and includes a mostly outdoor dining area. for a beer garden. Newman and Samaras have recruited one of the County’s most celebrated chefs, Neil Dowson, who put out an amazing spread of locally sourced food. My favourite was his chorizo sausage with romesco sauce, which paired very nicely with County Road’s specially brewed Terroir Run Radler. While most runners were sensible and retired early after dinner, I decided my training regime required one more glass of wine, which my wife and I found next to Lake Ontario on the shoreline deck of The Drake Devonshire. Well, since Norm Hardie’s Cabernet Franc is a relatively low alcohol wine, I determined two glasses would be alright… 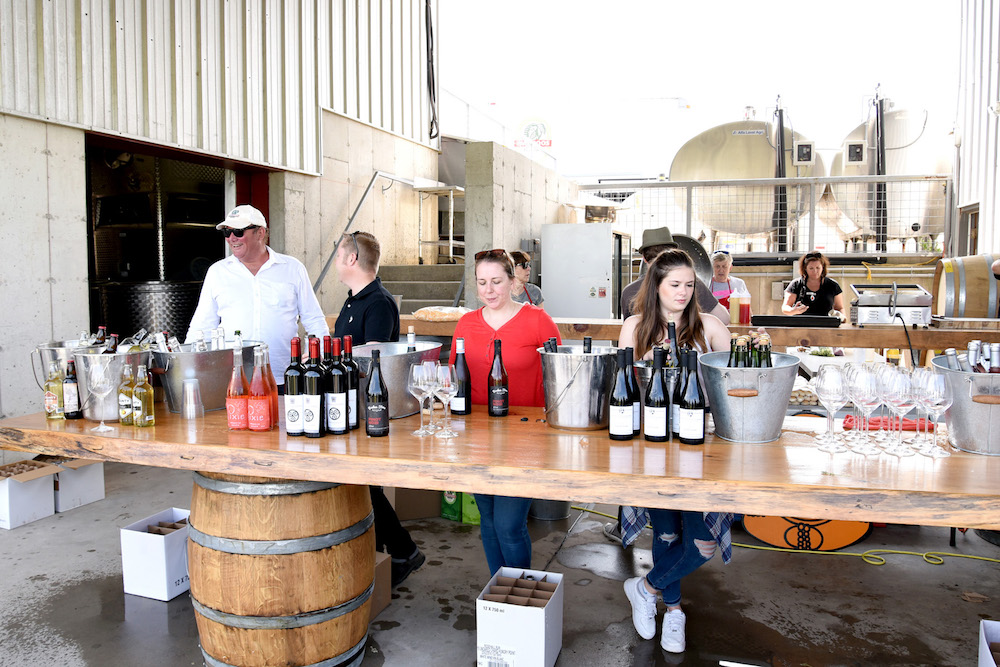 After an hour or so of hard running, I like to take a mid-morning break with a large glass of chilled Closson Chase Chardonnay. Or at least that’s how I rolled last Saturday. The Terroir Run ends at Norman Hardie Winery. Norm’s team shut the doors to the public until 1pm, so from 10 or so until then the pizza oven was fired up and all the wineries, cideries that sponsor the run poured out for the thirsty runners. I must confess that after that first glass my recollection of what I tasted is pretty patchy, but I do recall a great array of wines from across the county and ciders from County Cider Co., and The Old Third. (There was also coffee from Toronto’s Propeller, a specially made iced tea from Pluck, and all the water you could drink from Norm’s well.) 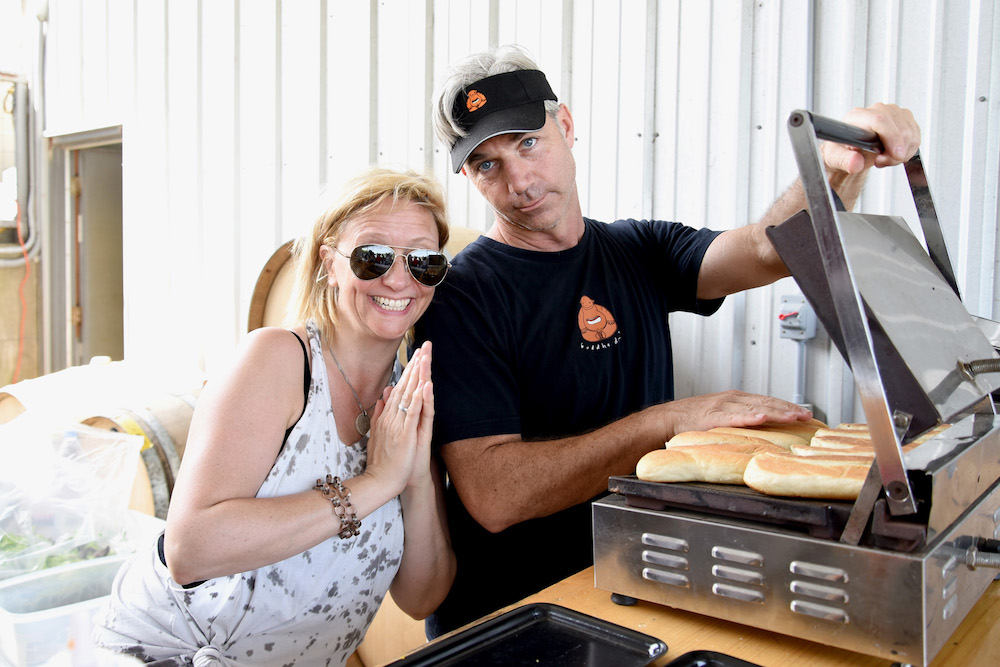 Lunch at Norman Hardie is always good: pizza made with his home-grown tomato sauce and PEC ingredients and salad from Vicki’s Veggies. When it’s supplemented with a one day Buddha Dog revival, washed down with loads of delicious PEC wine, and eaten after 10 kilometres of hard running, it’s superlative and exists on an altogether higher plane. It was a good lunch. And it was a good lunch in good company. The Terroir Run attracts people who like wine and running, obviously. We met some new people and saw some old friends and aquaitences, who might be familiar to longtime GFR readers like Sherry Karlo from Karlo Estates, Michael MacMillan from Closson Chase (who ran the entire course wearing a giraffe costume – I have pictures I intend to use as blackmail at a later date), Nathalie Goldberg-Fife from City Bites and Visa Infinite and Brian McCaw the founder of Wine Align: the last three turn out to be serious runners. 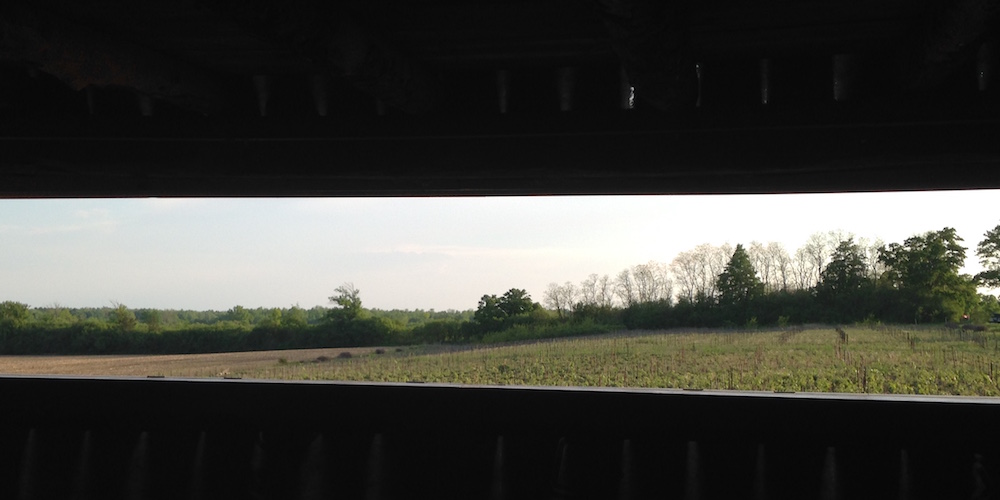 The dramatic view of the vineyard from the tasting room in the barn at The Old Third.

The Terroir Run wraps up around noon on the Saturday, which leaves the better part of the weekend to explore The County. For me, that meant a a very much overdue shower at The Mystic Dandelion and quick trip down to Bloomfield for a cone of Slicker’s famous ice cream. Then, it was back to the scene of the crime on Closson Road to taste and get to know winemaker Bruno François and vigneron Jens Korberg at The Old Third. The Old Third will get its own proper post at GFR soon, but it warrants mention now because it certainly merits a visit on any trip to Prince Edward County. François makes exquisitely fine Pinot Noir and Cabernet Franc from his small holding at the winery, but he also channels his Norman heritage by making a bone dry sparkling cider from Golden Russet apples sourced from one orchard nearby. After tasting some fine wine in their beautifully restored barn (Jens is an interior designer), it’s a treat to order a glass of cider and unique winery snack of a crêpe: savoury or sweet filled with what’s in season. Life is good in The County! 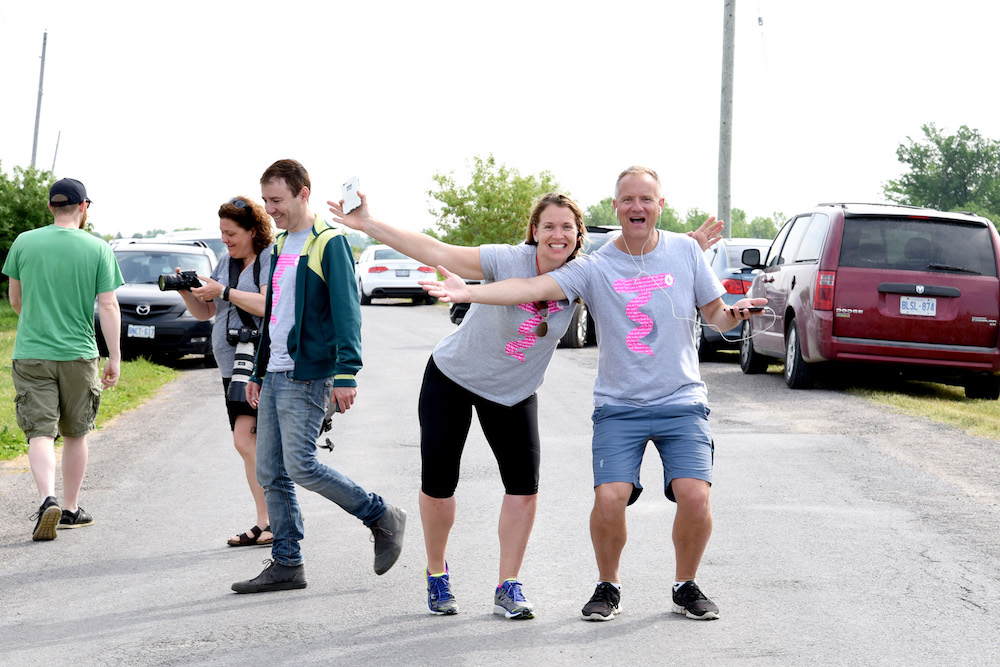 Rebecca and Andrew Mackenzie have already set a date for the 2017 Terroir Run. Photo by Jo Dickins. 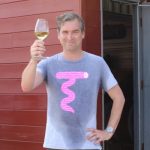